Alyaksandr Lukashenka announced on Monday his willingness to begin talks with the opposition on the future of Belarus. Yesterday Belarusian opposition leaders dismissed any talks until all political prisoners are released. As this digest demonstrates, despite their rhetoric, the... 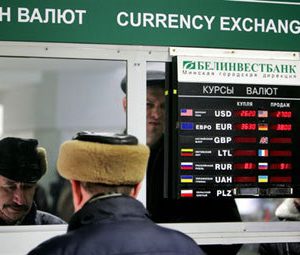 If you are in Belarus and only have Belarusian roubles to pay for your ticket – be prepared to stay in the country a bit longer.  AirBaltic and some other companies  operating in Belarus no longer accept Belarusian roubles. Instead they insist on payments in Euros – a currency which is nearly impossible to buy legally in Belarus. Today it became even more difficult as the National Bank of Belarus recommended commercial banks only to buy, but not to sell, foreign currency.

This is because local banks have to follow the official exchange rate established by the National Bank. Over the last months this rate has been nearly 40% lower than the market rate. No wonder that very few want to exchange money in banks and most people prefer the black market. "Don't exchange money in Belarusian banks" is the first tip given to those who visit Belarus these days.

No trust in Belarusian roubles

Since the collapse of the Soviet Union Belarusians mistrust their currency.  When millions lost their lifetime savings because of the devaluation of the Soviet rouble in the late 1980s – it was a lesson they learnt well. Nowadays Belarusians prefer to keep their earnings in a "hard" foreign currency rather than in "soft" Belarusian roubles.

Currency exchange offices used to boom in Belarus – all major supermarkets would have at least one. Until 2011 they were always busy. Now because of the difference between the official and the market rate hardly anyone uses their services. Sometimes you can see one or two people sticking around exchange offices, desperately hoping that someone new to Belarus might sell his dollars or Euros and give them a chance to buy them. Until recently banks were recommended to sell foreign currency which was sold to them by individuals.

People try to convert their salaries into a hard currency as soon as they can. But they cannot survive with no Belarusian roubles at all because most shops accept only Belarusian money. As a result consumers have to frequently convert their savings back into Belarusian roubles. Each conversion is a dilemma – to look for someone who can purchase their Euro or dollars at a market rate or to sell their hard currency to a bank with a nearly 40% discount. The first option is inconvenient and against the law. The second one means losing nearly half of your money. For Belarusians struggling with rising prices and declining income, the choice is obvious.

Sometimes they do not need to exchange money to pay for services. Many in the private sector set their prices in US dollars to avoid devaluation. For instance, they would quote the price of 300 US dollars to refurbish your kitchen. The payment can be made in dollars and it is usually the most desired option. But unlike the AirBaltic office in Minsk, they would also accept Belarusian roubles at the market rate. In practice, the market rate means black market rate.

How the black market works

Because currency exchange operations require a special license from the National Bank, most transactions between individuals breach Belarusian law. Determining the right market rate can be tricky.  Parties may bargain to get a better deal using word of mouth or the internet.

If you do not to have a friend or relative who can sell you Belarusian roubles or hard currency, you can try using the internet. Prokopovi.ch is the most popular online currency exchange market in Belarus.  The site is named after the former Chairman of the National Bank of Belarus Piotr Prokopovich.  Currency exchange problems began under his reign, though are attributable to the populist economic methods of Belarus promoted by Belarusian ruler Alyaksandr Lukashenka rather than to Prokopovich himself.

The other option is to avoid going to an exchange office altogether and exchange the money without intermediates. In this case, one takes the risk of facing sanctions of illegal dealing in foreign currency. Although the authorities usually turn a blind eye to such transactions, in some cases they may confiscate the whole amount of the illegal transaction and impose a hefty fine.

So if you come to Belarus with foreign currency – be prepared to take risks not to lose your money. That is what Belarusians have to do every day.