The unexpected rise of Belarusian universities in international rankings

What does the QS ranking measure?

The Belarusian State University has appeared among the best 959 universities in the world for several years now. In 2016, The Times Higher Education World University Ranking placed BSU among the 601-800 best universities. Quacquarelli Symonds rated BSU as 36th among almost 500 universities in Emerging Europe & Central Asia. 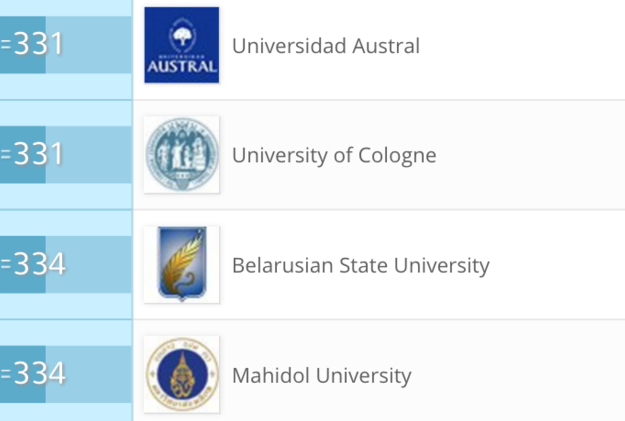 In ranking universities, QS assesses six main criteria. The agency first looks at the academic reputation of an educational institution. Gathering responses from 40,643 employers, QS measures the reputation of a university as a source of new employees. The agency then counts citations of research papers per faculty.

Nevertheless, the QS university ranking has received criticism for how they measure citations. Another cornerstone of their methodology is the high importance of academic reputation, which comprises 40% of the final score. Despite these criticisms, however, many believe that QS is one of the most reliable university rankings. TheTelegraph, The Guardian and Times named the ranking as the most reliable. 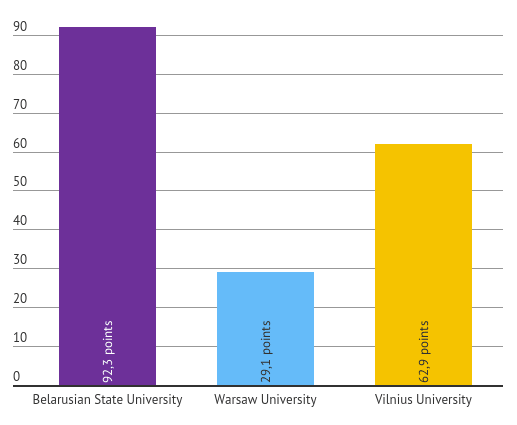 BSU's academic reputation remains lower than that of Polish and Lithuanian universities. At the same time, QS takes into account the number of teachers and students at a university. The Belarusian State University received 92.3 points out of 100 for its faculty/student ratio. In comparison, Vilnius University received 69.2 points and Warsaw University 29.1.

Despite restricted academic freedom and political pressure, Belarusian universities have several advantages. Higher education remains available for almost everyone able to pass a test after high school. Although Centralised Testing doesn't correspond very well to the school programme, many can pass it and enter university. Universities accept students even with 20 points out of 100.

An additional advantage of Belarusian Universities is the opportunity for students from low-income families to receive a scholarship. The scholarship money, roughly $30-$45 per month, barely covers living costs. However, almost every scholarship student can receive it providing he or she retains adequate grades every semester.

Belarusian Universities also provide students with cheap housing, which gives them the chance to live independently. Although the number of available places in student dorms and the quality of living accommodations remain low, international students and those coming from other cities or villages are guaranteed a place in the dormitories. The cost of rent for these dorms is extremely low, especially compared to renting an apartment. In 2017, students could rent a dorm for only $5-$20 per month, depending on the area and quality.

Both the Belarusian State University and the Belarusian National Technical University received the lowest scores in the 'academic reputation' section of the QS rankings. They could both improve their scores by addressing issues of academic freedom, independence from the state, and plagiarism. These factors directly influence the reputation of universities.

Universities still remain dependent on the state. Teachers and students have no influence on the election of provosts – these are assigned by the authorities. University and school teachers are part of electoral commissions which participate in election falsification. The loyalty of the educational system to the current political regime has become a hallmark of Belarusian universities.

Another urgent problem is plagiarism. According to the independent online magazine Idea, 74% of Belarusian students have downloaded ready-made essays, 63% have rephrased existing texts, and 30% have ordered papers for money. The Ministry of Education and Universities could easily introduce a system to check for plagiarism. However, this does not seem to be a priority for Belarusian authorities.

Although international rankings rate Belarusian universities higher every year, there are still many obstacles to development. Belarusian universities would benefit from granting students and teachers more economy – this would ensure the development of the Belarusian labour market and improve the quality of higher education. Independence from the state and extension of student rights could also prevent brain-drain in Belarus.

Does the Rating Ignore Reality?

Despite the fact that BSU and BNTU appeared in the QS ranking, certain aspects of higher education in Belarus are problematic.

Uladzimir Dunajeŭ, the head of the Bologna Committee, noted in Bolognaby.org that besides the underdevelopment of higher education in Belarus, ‘Belarusian people fear reforms, thinking that they will only lead to deterioration. The history of educational reforms can explain this position.' 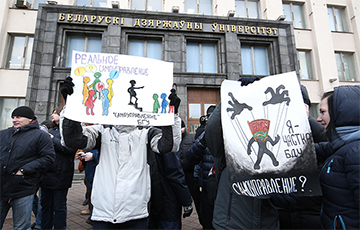 In 2010, many instances of political pressure on students occurred during post-election protests. Among the 700 people arrested after protests, many were students. In November 2015, the European Student Union called on the Belarusian authorities to put a stop to the increasing pressure placed on Belarusian students who participated in demonstrations, reports Belta.

In spring 2017, Belarusians protested against the social parasite tax, which obliges people to pay a tax for being unemployed. Students became active participants in the demonstrations, leading to yet more suppression from the authorities. For example, a student named Aliena Kisiel was kicked out of a university in Mahilyow for taking part in protests.

In assessing universities, research agencies often ignore issues related to political pressure. However, this factor remains important in non-democratic countries, where students become actors in political or social protests. The absence of this factor in the rankings may make the position of Belarusian Universities higher than they should be.

Regarding the citation rate of research papers, one of the six criteria of the QS ranking, BSU does well. However, the abundance of plagiarism might influence the quality of cited research papers. Additionally, the high citation rate might be explained by the rare use of foreign languages in Belarusian academia.

It seems that the official ranking of a university depends on many valuable formal indicators (such as the number of students and teachers, etc.). However, they fail to take into account factors such as the degree of academic freedom.

Numbeo, the world's largest database of user-confirmed data about cities and countries worldwide, ranked Belarus the safest country in the region in 2017. Other global metrics also indicate that Belarus is a relatively safe part of the world.

Domestic trends demonstrate that all kinds of crime have decreased over the past decade, with the exception of drug crime. However, political repression tarnishes the generally positive picture, as world media and local journalists report on these cases extensively.

The authorities should stop targeting the regime's opponents if they want to further develop relations with the civilised world and strengthen the rule of law at home.

Belarus: a safe country according to world rankings

In 2017, Belarus scored 10th in a ranking of crime and safety published by Numbeo, the world’s largest database of user-contributed data about cities and countries worldwide. The country went up by 15 positions since 2016. According to the ranking, Belarus's neighbours are far more dangerous: Poland took 30th place, Latvia – 40th, Lithuania – 50th, Russia – 67th, and Ukraine – 85th. 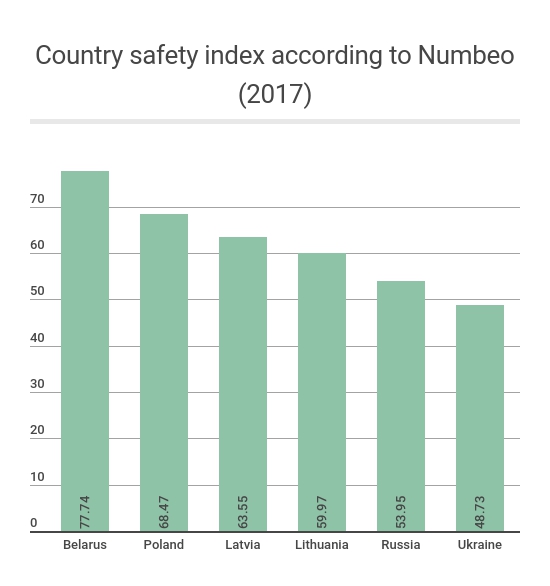 In a world ranking of intentional homicide, Belarus took 116th position, remaining between Albania and North Korea. In total, the rating included 219 countries. This rating was last compiled in 2013 according to the methodology of the United Nations Office on Drugs and Crime. Compilers of the rating recorded 5.1 murders per 100,000 people in Belarus, while in 2016 the figure decreased to around 4.5.

This is one of the most reputable indicators to assess the overall level of physical security in a particular state or region. Often, it is perceived as an index of the level of violence in society as a whole.

In the Global Terrorism Index 2016, prepared by the Institute of Economics and Peace in cooperation with the University of Maryland, Belarus scored 86th of 130 countries. According to the index, Belarus is a country with a low level of terrorism. Among the countries of the former USSR, Ukraine has the highest level of terrorism and ranked 11th. Russia (30), Tajikistan (56), Kyrgyzstan (84) also appeared below Belarus as more prone to terror. However, neighbouring EU members – Poland, Latvia, and Lithuania – ranked 130th as countries with no threat of terrorism at all.

The American nonprofit Prison Policy Initiative also published a study according to which Belarus ranks 12th in the world in terms of number of prisoners. According to their data, Belarus has 306 inmates per 100,000 people. A total of about 200 countries, along with every US state, is included in the ranking.

The United States was the world leader in this ranking, with 693 inmates per 100,000 people. Turkmenistan, a post-Soviet authoritarian regime, scored second with 583 prisoners, while Russia was third with 453. Belarus's other neighbours keep fewer people locked up: examples include Lithuania (254), Latvia (224), Poland (189), and Ukraine (173). 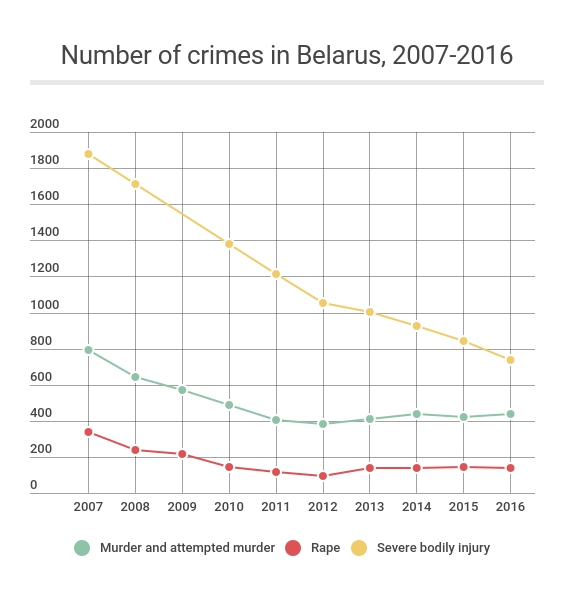 Belarus has experienced a steady decline in most types of crime over the past decade. Theft, the most common crime, fell by almost three times – from 103,000 to 37,000 cases. Serious crimes, such as murder and attempted murder, rape, and assault all decreased about 2.5 times, while robbery fell by four times. Hooliganism also halved, although it had seen a certain upsurge since 2012.

The only crime that grew over this period appears to be drug-related crime. Following an upsurge in the popularity of synthetic drugs (also known as spice) in the 2010s which lead to many deaths, the government started paying more attention to drug issues and made anti-drug legislation much harsher. Thus, the rise in drug crime could simply be a result of tougher legislation and the growing attention of the police, rather than a decrease in drug trade or consumption. 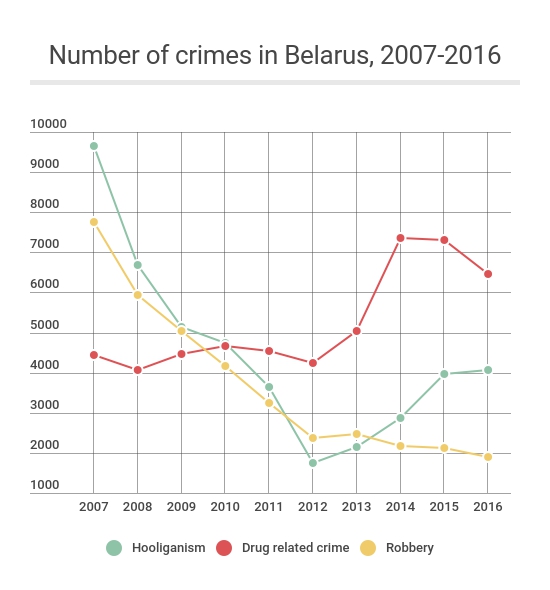 Nevertheless, alcohol remains the number one trigger of crime in Belarus. Belarusians commit over 80% of murders while drunk. Moreover, it remains one of the main causes of suicide.

As for the regional distribution of crime, the western regions of the country are traditionally less crime-ridden than the eastern and central regions. This could be explained by their large Roman Catholic and Protestant communities, as well as their geographical and historical proximity to Europe. Although Homiel Region was traditionally considered the most criminal in Belarus, it has now ceded its place to Minsk Region: the economic, financial, and human resources centre of the country.

Safety only for loyal citizens

Although Belarus may indeed be safer than its post-Soviet peers and neighbours, and the crime rate is consistently decreasing, one detail spoils its 'safe' image. Politically motivated persecution of the opposition and activists continues to be widespread. When it comes to politics, the good guys and bad guys reverse roles. 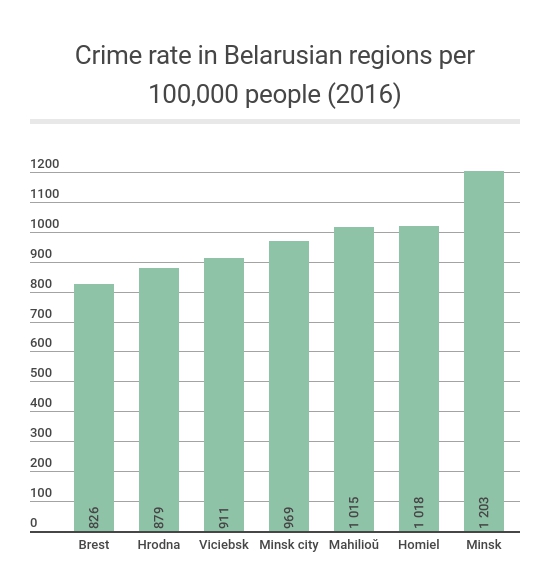 False evidence presented by police officers during political trials has already become a legend within civil society circles. The same officers who detain activists after mass rallies or other demonstrations usually serve as the primary witnesses. Their usual formula at the witness stand is that activists were swearing, waving their hands, and shouting anti-governmental slogans. In many cases, the police testify against a particular person even though they did not personally detain him or her or the suspect was even abroad at the time.

Their false evidence usually serves as grounds for administrative arrest or a fine. In more serious criminal cases, such as the recent White Legion case (a supposed illegal armed group), the authorities often fabricate a more sophisticated set of evidence, bolstered by large-scale TV propaganda. For instance, in the White Legion case, the KGB brought in a false informant (‘Frau A’ from Germany), accused the detainees of links with ISIS, plans to bomb the Moscow metro, and other outrageous claims.

This machine of political repression mars the image of Belarus as a safe country, and the world media and local journalists report extensively on such cases. Thus, Belarus retains its reputation as a dictatorship despite the many positive trends. The authorities should stop such repressive practises targeting the regime's opponents if they want to further develop relations with the civilised world and strengthen rule of law at home.