16 August 2020
On 14 August on Independence Square in the Belarusian capital Minsk, for the first time in 10 years, a rally of thousands of opponents of the authorities took place. And for the first time during the regime of President... 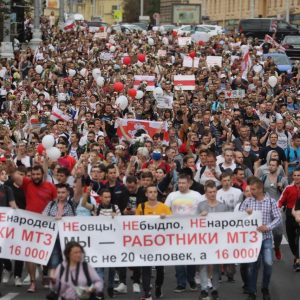 On 14 August on Independence Square in the Belarusian capital Minsk, for the first time in 10 years, a rally of thousands of opponents of the authorities took place. And for the first time during the regime of President Alexander Lukashenka, a rally at this location was held without the arrest of peaceful demonstrators.

This became possible thanks to an irreversible change in public opinion which has occurred following fatal mistakes by the authorities during the electoral campaign of 2020: they inadequately assessed the threat of protests, and applied a combination of responses to those protests in the wrong proportions.

The wrong combination of sticks and carrots

In theory, any authoritarian regime has three options when facing peaceful protests:

In practice, an authoritarian regime can combine these options, and that is exactly what the Belarusian regime tried to do on 9-14 August.

But the problem (for the regime) is that they combined these options incorrectly. The harsh suppression of peaceful protests on 9-11 August was not harsh enough to prevent street activity emerging in the days following. At the same time, the horrific violence meted out by the security forces’ angered Belarusian society to the point that it turned people against the authorities, including those who until then had not taken an active position on the election or post-election protests.

The Ministry of Internal Affairs claims 7,000 people have been detained, but eyewitnesses say that prison cells are overcrowded tenfold, and the number of victims of police violence is much higher. Human rights activists note the widespread use of torture and ill-treatment of detainees, including severe beatings and rape. 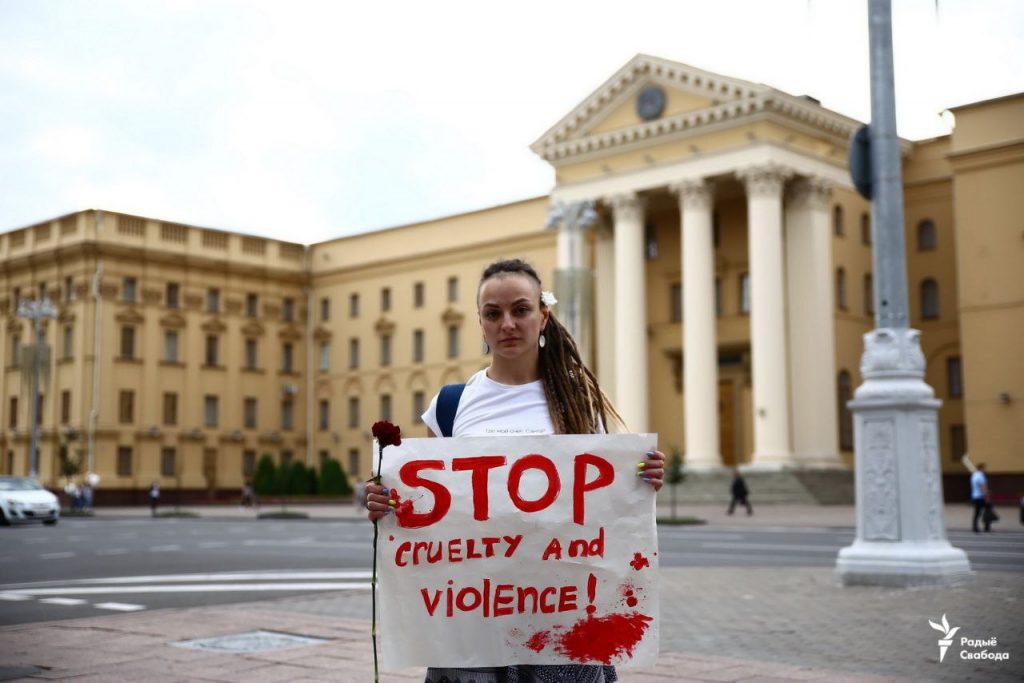 On 13-14 August, the authorities chose a wait-and-see tactic, mostly allowing the protests to develop on their own. However, adopting this approach after the wave of violence that had shocked society did not lead to the demobilisation of society and the petering out of protests. On the contrary, more and more people used the window of opportunity for peaceful protest to demonstrate their solidarity with the victims of repression and demand free and fair elections. This culminated in the peaceful march of tractor plant workers and women with flowers to the Government House on 14 August.

Strikes and workers’ demonstrations demanding free elections have taken place not only at the Minsk Tractor Plant but at dozens of state and private enterprises throughout the country, including Belaruskali, BelAZ, Belarusian Nuclear Power Plant, MAZ, Belarusian Metallurgical Plant, Grodno-Azot and others.

Finally, on 12-14 August, the authorities tried to use carrots. They turned on the internet, released many detained people, and engaged in dialogue with journalists and residents of regional, single-industry towns. However, the main demand of all protesters – free and fair elections – cannot be fulfilled by the authorities, since in the current situation this is tantamount to the resignation of Lukashenka. For the protesters, any compromise without securing this point is tantamount to the defeat of the protest movement.

The Belarusian authorities have failed to show consistency in any of their responses to the problem facing them, and have alternated these responses in the wrong proportions. In particular, they first angered people with violence and then allowed the protests to develop spontaneously.

Lukashenka for 26 years successfully suppressed political dissent and competition and controlled public sentiment. However, this means that while he has vast political experience, he is also highly dependent on old approaches, lacks a fresh outlook, and perceives what is happening through the lens of his own propaganda.

The protests have been attended by tens of thousands of people all over the country – from Minsk to villages. The protest movement is decentralised. People are forming chains of solidarity in their dormitories and even in their yards. Thus, the exact number of participants at all the protest actions cannot be established. 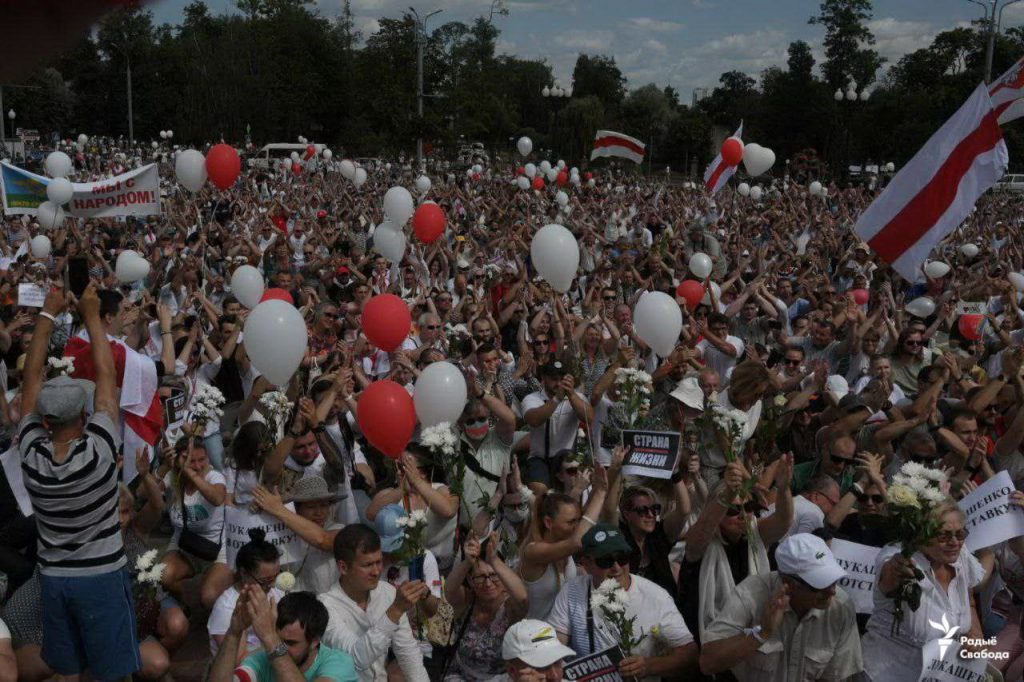 Workers of Hrodna-Azot and other citizens attend a peaceful rally in Hrodna. Photo: RFE/RL

Following the elections, Lukashenka and the state media preferred to ignore what was happening in the country and to behave as if nothing had happened. The only real effect of this policy has been the rapid growth in Belarusians using the Telegram messaging application and, in particular, following Nexta channels, run by the country’s most popular political blogger, with over 1.5m subscribers.

On 14 August, Lukashenka nevertheless began to comment on what was happening (in the face of rumours that he was not even in the country). However, his clumsy statement that only 20 people were participating in the workers’ strike simply provoked tractor plant workers to put together a banner stating “There are not 20 of us, but 16,000.”

The authorities cannot or do not want to acknowledge the scope of the strikes, and are also ignoring their political nature, speaking out against them on the basis of economic consequences.

Regardless of how the current street protests end, irreversible changes have taken place in Belarusian society, which will affect the future of the country as well as historical attitudes towards the Lukashenka regime.

First, supporters of changes in Belarusian society have firmly recognised themselves as the majority. Despite differences in views and aspirations, people united around election candidate Sviatlana Tsikhanouskaya as a symbol of change. In the future, this camp will inevitably face a split. But at the moment, the political emptiness of Tsikhanouskaya has allowed everyone to project onto her the political images that he or she was looking for. 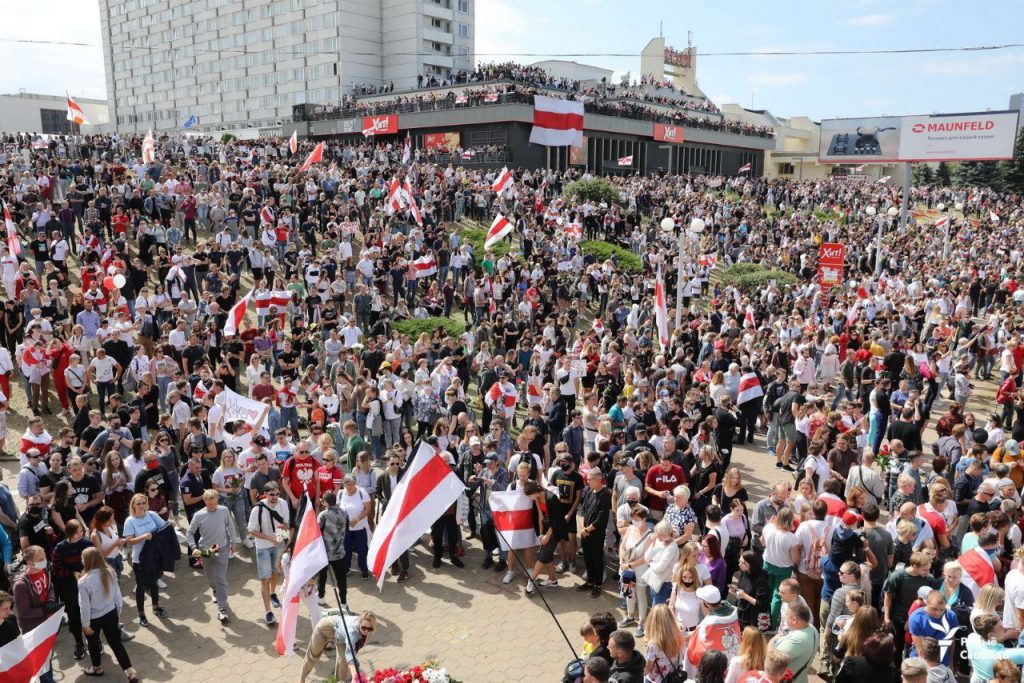 A memorial event is held at the place the first death of a protester in Minsk took place. Photo: RFE/RL

Secondly, on 9-12 August, the authorities stained themselves when they allowed the security forces to use uncontrolled violence against the general population, including bystanders, women and children. For the first time, a participant in a peaceful protest in Belarus was killed (at least one). The repressions themselves were not new, but their scale and escalation (for example, previously, flashbang grenades and rubber bullets had never used) coincided with the politicisation and mobilisation of people. Most people had no experience of political activities and had never faced police violence. Safety has always been one of the cornerstones of the Lukashenka regime, and in August 2020, the regime itself destroyed this pillar.

What is going on in Belarus? Key questions answered

The presidential election campaign in Belarus has caught many in the country and outside by surprise. The authorities, the opposition and policy-makers in other countries are now considering possible strategies, but often without objective information from Belarus that is not driven by a particular political agenda.

This brief post attempts to respond to some common, complex questions, which many observers of Belarus have.

What makes the situation now different compared to the 2010 protests?

Belarus has not seen this scale and reach of protests since the early 1990s, when the Soviet Union collapsed. The large numbers of people protesting in all parts of the capital Minsk, and in all major and even smaller cities of Belarus, make the protests completely different from the protests that followed the 2010 presidential election. Moreover, this time former regime (Valery Tsepkala) and business heavyweights (Viktar Babaryka) ran for the presidency. The poor state of the economy and the authorities’ mishandling of the coronavirus cases also contributed to the current crisis.

Can these protests lead to change?

These protests will certainly lead to change. It is, however, unclear whether Belarus will become even more repressive and tied to Russia or whether the political regime will become more liberal. The protests involve groups far wider than the traditional opposition-minded intellectuals. Initially, the protests were dominated by younger people, many of whom do not remember Belarus being a democracy or led by someone other than President Alexander Lukashenka. Moreover, the recent strikes of workers with political demands at large enterprises is something Belarusians have not seen since the 1990s.

Do these protests look like those which happened in Ukraine in 2013-14?

Yes and no. They certainly resemble the Ukrainian protests, when people rose against falsification of elections by the incumbent pro-Russian president. However, the 2020 Belarusian protests also have unique characteristics. This time, the main opponents of Lukashenka come from outside the traditional opposition and benefited from the support of powerful groups in Russia (logistical and financial).

The main opponent of Lukashenka, Sviatlana Tsikhanouskaya, is a woman completely unknown a few months ago and without any managerial experience. However, many see her as a symbol and voted for her to move beyond Lukashenka. The protesters make no clear anti-Russian or pro-EU declarations and during the most crucial initial period, the protests did not have any leaders. People were united by the urge to get rid of Lukashenka.

From the very beginning, the level of police brutality has been far greater than in Ukraine, and the violence spiralled much more quickly. Two protesters are now confirmed to be dead. Police detained many thousands of protesters in all parts of the country, overcrowding the prisons. Indiscriminate violence against peaceful protesters, torture in prisons, and severe limitations on the internet contributed to people switching to a few channels on the messaging application Telegram (mostly run from abroad) which effectively became the main tool of coordination, exchange of information and in some cases radicalisation. However, the violence has not reached the stage of intentionally killing people with live ammunition, as happened in Ukraine, nor what followed in Crimea and Ukraine’s eastern Donbas region.

Putin seems to have taken a wait and see attitude. Why is it so?

This is not exactly the case. Putin congratulated Lukashenka on victory even before the announcement of the results, perhaps because of the growing protests. This is a powerful statement of support. Moreover, at the moment of writing this text, Lukashenka is in control of the security apparatus and the government. So there seems to be no plausible reason to intervene. In Ukraine, Russia intervened only when President Viktor Yanukovych lost de facto control over the country and fled. So the critical junction to test Russia’s reaction is what happens if Lukashenka loses de facto control over the situation in Belarus.

If Lukashenka remains in power, will it lead to greater integration with Russia?

If following the brutal crackdown against the protesters the European Union introduces serious sanctions, the Belarusian regime will have no choice but to cooperate more closely with Russia. This is why, many say, Russia would benefit from at least weakening Lukashenka.

The most troubling scenario will be if power does not transition in an orderly way from Lukashenka to someone else. The Belarusian army, law enforcement agencies and security services may be tempted by promises of better social status and greater financial benefits, which they could have as part of Russia. Therefore, their loyalty to the Belarusian state should not be taken for granted. If Ukraine teaches us anything, it is that in the worst-case scenario for the Belarusian regime, facilitating an orderly transition rather than forcing Lukashenka to flee the country should be a priority. However, we are far from this situation at the moment.

If you think that Belarus Digest should resume its work in these difficult times, please support the project with a donation.

Yarik Kryvoi
Yarik Kryvoi is the editor-in-chief of Belarus Digest and the founder of the Ostrogorski Centre.
all articles » Follow @
belarus protests Minsk