Gallery Ў hosts a presentation of a book on Ales Bialiatski in Minsk. The Center for Legal Transformation trains the first group under its not-for-profit Law School. A Minsk court orders compensation to former political prisoner Dmitry Bondarenko.

BISS shares plans for 2013. The public announcement of the...

Gallery Ў hosts a presentation of a book on Ales Bialiatski in Minsk. The Center for Legal Transformation trains the first group under its not-for-profit Law School. A Minsk court orders compensation to former political prisoner Dmitry Bondarenko.

BISS shares plans for 2013. The public announcement of the foundation of the Vital Silicki Prize For Contributions to the Promotion of Political Thought in Belarus became the focal point of the gala evening that Belarusian Institute for Strategic Studies traditionally holds on 14 January to celebrate Old New Year’s Eve.

The Vital Silicki Commemoration Committee established the Vital Silicki Prize to commemorate the first BISS director. Alexei Pikulik, BISS Academic Director, presented the new staff members of BISS, drew up the results of BISS' activities in 2012 and spoke about the projects planned for 2013.

“Bialiatski’s Case” presented in Minsk. On 18 January, the Minsk-based Gallery Ў hosted the presentation of a book titled Bialiatski’s Case, a documentary novel by journalist Valer Kalinouski. The event was attended by Ales Bialiatski’s relatives and colleagues, as well as prominent human rights defenders, political and cultural figures.

Partizaning  in Gomel and Brest. On 17 January, an open lecture titled Partizaning: Tactics of street art for improvements the city, was held in Gomel. The event was organised by the youth club Civilization, a project of the Gomel Democratic Forum. The invited guests were the Belarusian street-art community SIGNAL and a famous Russian street artist and a leader of the Partizaning Igor Ponosov. The meeting was attended by over 70 young Gomel residents. The same lecture took place in Brest, organised by youth NGO Dzedzich.

Not-for-profit law School. On 12 January, the Legal Transformation Center graduated the first group of the Not-for-profit Law School, organised under the Flying University. 3 people compete for every place; the course was attended by practitioners, civil society activists, and students of humanities.

New cultural CSO. On 12 January, in Minsk, an organisational meeting of the founders of the Society of Amateurs of Belarusian History Vaclav Lastovsky was held. The founders are professional historians, writers, journalists, artists. The new organisation will apply documents for registration.

December 2012 disability rights monitoring. In December 2012, the Office for the Rights of People with Disabilities received 38 citizen appeals. The largest number of complaints concerned issues of adequate standards of living, habilitation and rehabilitation. The Office conducts such monitoring on the monthly basis.

Expert discussion on capacity building. On 10 January 10 2013, the Capacity Building Market place conducted an expert discussion titled Capacity development of Belarusian CSOs in 2012.  The event was attended by about 30 CSO experts and consultants. The discussion summed up the major trends in the capacity development field and concluded that Belarusian CSOs should get out of their "comfort zone" in order to develop.

IT in Belarusian. The students of Belarus State Technological University have launched the Centre of Assistance to Students which organises courses on trend IT technologies. The lessons are conducted mainly by students, and two of them teach in Belarusian.

International conference in Warsaw. Lazarski University in cooperation with the Belarusian office of the Konrad Adenauer Stiftung, NED and the Visegrad Fund announced a call for applications for participation in the 5th International conference, titled 'Revolt in the name of liberty: the forgotten Belarusian gene?'. The conference is aimed at searching for historical inspiration for civil society in Belarus today. It will take place on 8-10 March 2013, in Warsaw.

Tsmoki at state TV. National TV picked up the rhetoric of the promotion of Dragon (Tsmok) as a symbol of Belarus. The video shows the initiators of the very idea – the Budzma! campaign which at the beginning of 2012 launched a pilot project ttled Searching for Tsmok, which aims to provoke wide public discussion of ‘cool’ Belarusian cultural heritage and the country’s brand.

Budzma and Mogilev City Executive Committee have published a joint call for citizens’ ideas on how to improve cultural life in Mogilev. Partnership between Budzma! and the city authorities will allow citizens to present and discuss their ideas in a creative lightning talk format, honouring the election of Mogilev as the 2013 cultural capital city of NIS and Belarus.

Fine for online photo. On 5 January, three local human rights defenders Victor Sazonau, Raman Yurguel, and Uladzimir Hilmanovich were fined 15 base amounts each (about €140). The activists staged their solidarity action on the international day of human rights: they took a photo in the street with Ales Bialiatski’s portrait and later published the photo on the website of the HRC Viasna. On 18 December, the local police made up a protocol on an unsanctioned picket based upon the media fact only.

Warnings and detentions in 2012. BAJ summed up the information about detentions and warnings, issued by law enforcement agencies and special services to members of the organisations: at least 12 journalists received warnings from the prosecutor’s office for contributing to foreign mass media without accreditation; at least 4 journalists had prophylactic talks with the KGB; and around 60 cases of detention occurred.

Before the collapse of the Soviet Union Minsk cultural landscape was one of the most “Sovietized” in the USSR. Unlike in Warsaw, Vilnius, Kiev and even Moscow where city officials in 1990s supported communist toponymics elimination Minsk toponymics changes were limited.

Moreover, in 2000s the main capital avenues were renamed once again and now refer to the victory in Great Patriotic War – Soviet historical myth which became the main nation building myth in Lukashenka Belarus. For this reason the issue of Minsk naming often becomes a hotly debated political subject.

A city without a past?

Today’s Minsk is a city which was designed and built after the World War II. Despite the fact that Minsk has a long, nine-century history, most historical monuments did not survive. The majority of buildings in the historic parts of the Upper City and Lower City were destroyed during and after World War II by Soviet authorities. In particular, the Soviet authorities destroyed the Lower City in 1960s and replaced them with blocks of flats.

Minsk is different from Central European cities because of the absence of an old town and architecture from periods before social realism. At first glance, it seems that the city has no past and was built fifty years ago.

Only fourteen streets and one square were renamed and none of communist sculptures were removed. These developments took place only during a short period between 1990 and 1993.

Why has the renaming been so limited? The initiative “Return Minsk Historical Street Names” from beginning of 1990s included renaming around thirty street names. Most of them were to receive their pre-1917 names. Former representatives of the Soviet nomenclature who became Minsk officials at the beginning of the 1990s opposed the initiative.

The limited changes in Minsk toponymics have been made possible only after pressure by City Council deputies from the Belarusian Peoples Front – the main opposition nationalist party in 1990s. 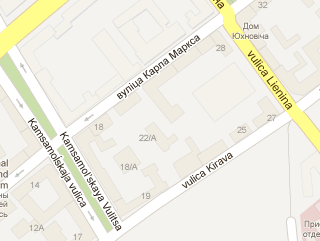 Back to the Soviet past

In 1993 this process stopped. After Alexander Lukashenka won the elections in 1994 the political climate in the country changed, the new president called the collapse of the USSR a geopolitical catastrophe and promised to restore the Soviet Union.

That is why the continuation of streets names decommunisation was not possible.

In 2005, at the year of 60th anniversary of victory in the Great Patriotic War to perpetuate the heroism of Belarusians, high state authorities initiated the renaming of two central Minsk streets.

This renaming was done to increase in the city landscape the memory of the Great Patriotic War, which had become the main historical myth in Belarus.

Nevertheless plenty of Minsk inhabitants are not satisfied with communist naming in the city. The a case of Lenin Square metro station renaming is very telling.

In 2003 city authorities returned the  Nezalezhnasci Square station its old communist name Lenin Square. A large number of passengers and opposition activists did not like the decision which resulted in the permanent practice of deleting Lenin Square stickers from metro line maps in train cars.

Several detentions and penalties imposed upon “metro activists” followed as well as petitions and rallies to return the station name Independence Square. In 2010 the commission for street renaming in the city Executive Committee decided to rename the metro station Independence Square, again.

However, at the beginning of 2011 it cancelled the decision, explaining it by a large number of protests by city residents against renaming.

Minsk toponymics as a political issue

The issue of toponymics also used in political campaigns. Illustrative example is the campaign to rename Ulyanauskaja street (Ulyanov is the real surname of Lenin) to Bykau street (Bykau is a Belarusian writer and dissident).

The campaign began just before the 2010 presidential election and its main aim was to promote the opposition candidate Uladzimer Niakliayeu’s movement “Havary praudu”. During the campaign, approximately one hundred thousand signatures in favour of the name change were collected.

Many Minsk inhabitants are unhappy about Soviet names of Minsk streets. (See the map of Minsk city centre on google maps.) This topic is regularly discussed in independent mass-media and many Minsk intellectuals have already expressed their opinion to reform Minsk toponymics.

Clearly, the issue of Minsk toponymics will continue to be used as an instrument of political struggle. The Belarusian authorities clearly want to preserve myths and references to the Soviet past.