Belarusian scholars devoted significant attention to the structure and of the Belarusian society and what drives local democracy and motivation of Belarusians. 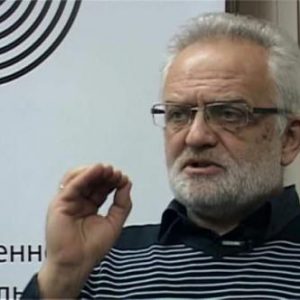 Belarusian scholars devoted significant attention to the structure and of the Belarusian society and what drives local democracy and motivation of Belarusians.

New edition of Belarus Headlines. The VIII issue of Belarus Headlines commemorates the one year anniversary of prominent Belarusian political scholar Vitali Silitski’s passing. Dr Silitski served as academic director of BISS and left a profound legacy for Belarusian political science. In this issue Belarusian and Western experts share their memories of Vitali as a person and reflect on the relevance of his works today.

We Need to Destroy ‘Moscow’ in Belarusians’ Minds – Uladzimir Matskevich, philosopher and methodologist, specified the terms used under his Cultured Politics program, and summed up some results of the program’s activity during a public lecture under the "Urbi et Orbi" series. He reminded about the main thesis – "To think Belarus", as well as about the key categories, which are to use within the framework of the Cultured Politics: "politics", "culture", "to think / to conceive", "Belarus".

Sociological Study on the Composition of the Belarusian Society – a new policy study by Dr. Anaïs Marin was requested by the European Parliament's Committee on Foreign Affairs. Building on the results of independent sociological surveys, this study tries to assess the worldviews, social needs and dividing lines among Belarusian society ahead of the 2012 legislative elections. It critically reviews the EU’s 'dual track' policy and instruments and calls for adopting a new strategy to draw the country closer to the EU while circumventing its authoritarian leadership. The study advocates a more inclusive approach of neighbourhood relations, allowing for mutually beneficial cooperation for the sake of modernising and hopefully democratising Belarus.

Civil Sector in Belarus – Everyday Life and Organizational Processes – Vital Silicki wrote this article as part of the integrated study “Belarus’ NGO Sector: Potential for Change,” conducted by a research team at the commission of several Belarusian NGOs from 2005 through 2009. The author is looking for answers to the question how the civil community in Belarus is capable of promoting democratic changes in society in the context of the idea of civil society’s self-value as the “fire keeper” and bearer of social spirit, whose experience, values and capital will catalyse transformations in Belarus under the right circumstances.

Is There Any Future For the Idea of “Local Democracy”? – Ulad Vialichka, the chairman of the international consortium "EuroBelarus", considers about the prospect of the idea of ​​"local democracy" based on his participation in the General Assembly of the Association of Local Democracy Agencies (June 7-8, Italy). In particular, the expert notes that "Belarus is now very far from implementing the idea of ​​local democracy. But if we want to change our life for the better, we need to think and act".

In Belarus We Have Something To Fight For – Alexander Stelmakh, the director of Onliner.by, talks about his life philosophy and political views. Among his most bright quotations are the following: “Lukashenka is not the reason, but a result”; “If you don’t like your salary – work more”; “People must understand that before the fight for European values and human rights starts, they need to figure out what they want, how they make money, what they are doing; and get rid of the feeling that someone owes them a job, a salary, an apartment and a loan”.

Economic Development of Belarus in January-May 2012 (audio) – Yaroslav Romanchuk, Analytical Center "Strategy", and Anton Boltochko, the Liberal Club (the CASE Program on PRIMUS) sum up the results the economic development of Belarus for the first five months of 2012. In particular, experts note the trends of the inflationary failure with insufficiently tight monetary policy, as well as growth in retail trade by 7.7% with falling of real disposable per capita income by 0.1%.

Belarus: Scenarios of a Common Future – the Cytadel project presents the verbatim and audio report of the round table which took place on May 24, in Minsk. Participants come from different ideological positions (Eurasian, West-Rusizm, Liberal), but trying to find common points for the successful development of Belarus.

Belarus is Interested in Development of Legislation on Charity – Olga Smolianko, the director of the Legal Transformation Center, comments the National program for international technical cooperation in 2012-2016, approved on May 4, 2012. The National program contains 114 project suggestions, characteristics of international technical assistance projects, submitted by republican state bodies and other interested actors for 411,5 million USD.

Analytical Paper. May 2012 – Belarusian Security Blog released its monthly analytical paper which states the weakening of the stability of Belarusian state. The experts believe that it is connected with increase of systemic problems in public administration, defence, and foreign politics in the absence of clear leadership plan to correct the situation.

The European Myth of Belarusian Socialism 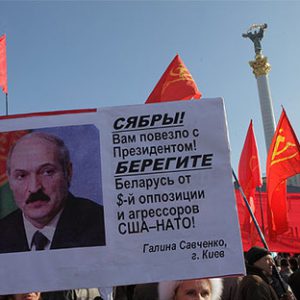 Last weekend, the Party of the European Left held a conference in Minsk. Some delegates were denied entry to Belarus although the party has frequently taken a moderate position on the European Parliament's resolutions on Belarus.

In the past, the European Left has also expressed solidarity with the Belarusian government on a national level in some European countries and in Germany. Many of them believe that the Belarusian regime shares their ideology.

Belarusian Social Democrat Anatol Sidarevic pointed out that “Lukashenka with his rhetoric has been and, may be still, considered almost a Socialist.” Belarusian journalists and activists express similar views. Some write about socialism in Belarus, and others call Lukashenka “a spontaneous socialist” or even a social democrat. But in fact the Soviet-looking facade of the Belarusian regime is deceptive.

Absolute Control is the Ultimate Goal

It is extremely hard to identify an ideological affiliation of the Belarusian ruler. He is known for contradictory statements such as "market socialism" and these do not help to understand much about the ideological underpinnings of the regime. Yet hard facts speak for themselves.

Belarus has the least employee-friendly employment system in Europe, which strips workers of any protection in their relations with employers. A 1999 presidential decree effectively made much of the Labour Code a dead letter and launched a massive compulsory introduction of temporary contracts to strengthen authoritarian consolidation in the country.

Now, almost all Belarusians work on short-term contracts – often concluded over a very short term. This allows the employer to fire them without explanation after the contract expires. No one can be certain of job security. According to statistics published by the state-controlled trade union FPB two years ago, 35 per cent of contracts were established for 3-5 years, 31 per cent – for 1-3 years and 30 per cent – for one year. Although another presidential decree allowed the employee to get a permanent contract after five years of work, the general picture remains very sad for employees.

The trade unions are far from being independent or influential. They exist only as dispensers of welfare as in Soviet times. Only the volume of help provided has changed. They play almost no social or labour protection role. Some independent trade unions exist but they are marginalised.

In 2003, the International Labour Organisation (ILO) launched an investigation into the complaint of Belarusian independent trade unions concerning violations of their rights by the government. A special commission confirmed these violations of workers' rights. Later, the ILO repeatedly defined Belarus as a grave violator of trade unions' rights, but to no avail. The government ignores most of the ILO's recommendations.

This year, the ILO put Belarus on the “long” and “short” list of states violating rights of trade unions. The short list includes 25 states which violate the rights in the most grave and systematic manner and Belarus has belonged to this group for almost a decade. In 2007, the European Union suspended its trade preferences for Belarus for violations of trade unions' rights – effectively introducing economic sanctions for the first time.

The government may dictate any labour conditions it wishes. This transforms the country into a kind of sweatshop, common in the developing world with cheap and docile labour force, minimal regulations and full freedom of action for employers. With no significant strikes or other forms of industrial action, Belarus may be a paradise for any investor shrewd enough to cut a deal with Lukashenka.

Nothing Outside the State

There are some real signs which make the Belarusian regime look socialist. The health, education and welfare systems are probably the most positive aspects of the Belarusian state. But they exist as remnants of Soviet times and are gradually being dismantled as the government gradually cuts costs.

Although education is nominally free, in fact only a minority of all students do not have to pay for their studies. And even these students will have to work for two years for very small wages to compensate for their "free education". Similarly, more and more services in hospitals are no longer free. Moreover, the very fact that some services are still free does not make a country a socialist – otherwise most EU countries would be socialist.

The Soviet conservatism has its best reflection in the share of state ownership in Belarus. The Belarusian government declared many times its plans to privatise state-owned enterprises. Yet it is still improbable, since such a step will lead to radical changes in the economic model of the regime.

The Belarusian economy equals state. News portal Naviny.by recently noticed that the share of the state sector in total industrial output in 2011 made up more than 70 per cent of Belarus' total output. State-owned enterprises and enterprises partly owned by the government employed c. 1.75 million people, i.e. 50.8 per cent of all personnel of Belarusian enterprises except for those employed by small business. The same applies to the profits. In 2011, state-owned enterprises earned almost two-thirds of the profits.

Of course, not all of them were profitable. In a recent study, World Bank experts argue that the state production conglomerates let the government hide the losses of some enterprises among profits made by others. This system demonstrates merely that the regime only avoids the reforms to maintain control, not that Lukashenka is bringing the nation to socialism.

The same lack of ideological preoccupation shapes Belarus' foreign policy. Lukashenka exploits Russian Communists to get leverage in the Kremlin, supported Polish populist Lepper to take revenge on Poland for its support of the Belarusian opposition and befriended Hugo Chavez for good money. Yet, there was not a single serious ideological project undertaken by the Belarusian government abroad. Just business.

Lukashenka's Regime: Neither Left, Nor Right, and Nor Centre

In fact, opportunism is the only suitable term to denote the current Belarusian system. The ideology-free elite wishes to preserve its power without embarking on high-minded idealistic abstractions. The ruling elite inherited its power from the Soviet state and did not have to struggle for it. It has always needed to simply preserve the existing order. For that reason, it is pointless to talk about any kind of Socialism or even a left-wing ideology of the Belarusian regime.

None of the regime's key figures, such as Uladzimir Makey or Mikhail Myasnikovich, display any socialist sentiments. Seriously fanatical communists or hard-core adepts of socialist ideology find themselves in unimportant positions.

For example, even the nominally high-ranked Anatol Rubinau only heads the Council of the Republic, which serves no serious function in the state other than being a social club for officials. Although the ruling elite is not homogenous, disagreements between various factions inside the ruling regime usually do not happen along ideological lines.

The Belarusian regime is a self-interested opportunistic authoritarianism which has no stable ideological preferences. Lukashenka has much more in common with Ferdinand Marcos of the Philippines and Asian despots  than with Fidel Castro or leftist Latin American rulers.