21 November 2017
Minsk Dialogue conducts a discussion on the prospects of the Belarusian-German relations after the recent parliamentary elections in Germany. Idea online magazine transforms into the Centre for New Ideas. Human Constanta launches a week of educational activities addressing fascism... 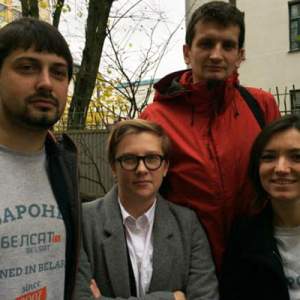 Minsk Dialogue conducts a discussion on the prospects of the Belarusian-German relations after the recent parliamentary elections in Germany. Idea online magazine transforms into the Centre for New Ideas.

Human rights activists launch a campaign to monitor local elections. Viasna: over the last two years, 20 students were expelled from Belarusian universities for political reasons. This and more in the new edition of the Belarus civil society digest.

Kastryčnicki Economic Forum, KEF 2017 publishes its materials. The largest economic conference was organised on 2-3 November by independent think tanks for the 5th consecutive year to promote reforms in the country. The video records, presentations, and photos are available.

Germany’s foreign policy under the new coalition. On 22 November, Minsk Dialogue expert initiative and Konrad Adenauer Stiftung invite to a discussion on the prospects of the Belarusian-German relations after the recent parliamentary elections in Germany. The event is planned to gather up to 100 participants.

Idea celebrates its 5th anniversary and transforms into New Ideas Centre. The upgraded organisation will combine the features of a media platform, public forum, think tank, and advocacy group. The team is willing to convince Belarusians why reforms are needed, and what reforms should be.

Flying University seeks support for four new online courses of the Belarusian intellectuals in a modern format and at a professional level. Since December 2016, Flying University created 9 video courses on actual topics. Now the crowdfunding campaign aims to raise funds for courses on topics Open Data, Play as a cultural phenomenon, Creative Photo, and Practical Politics.

Civic education in Ukraine and Belarus was discussed in Minsk, on 8 November. The event presented an analytical paper with recommendations for non-formal education providers interested in organising Ukrainian-Belarusian projects. The organiser was the Association for Life-Long Education and international partners.

Student Week 2017 was held on 11-19 November. Belarusian youth and student organisations organised a number of activities for youth during the Week dedicated to the International Students’ Day. The programme included a human library, discussions, open lectures, quiz, movie nights, and music concerts. Among the organisers, there were Student Rada, BOSS, and others.

Media Navigator website is launched for coaches, teachers, and media educators. This is a set of exercises to develop media literacy in Eastern Europe. The site has navigation for different age groups, topics, methods and levels of complexity. Experts from 11 countries, including Belarus, implement the project.

Week of educational activities against fascism and antisemitism was held in Belarus on 9-19 November. The organiser was Human Constanta CSO in concert with a number of human rights CSOs. The agenda included the programme of film screenings, human library, WATCH DOCS Belarus, seminars on the concept of deep antifascism, exhibitions, etc.

Public Space Day in Minsk. On 26 November, Flying University, Urban Tactics almanack, the Green Belarusian Party, Green Network and Architectural Bureau-35 invite to discuss the social, political and humanitarian dimensions of public spaces. The event will present the practices implemented in Belarus and abroad on working with courtyards and pedestrian zones.

Local projects that can change society were presented by the School of Young Managers in Public Administration (SYMPA) within the Weeks of Sustainable Development. During the year, SYMPA supported six community projects aimed at creating new forms of interaction at a local level, including an assistance centre for children with disabilities in Turaŭ, work with residents of Frunzenski district in Minsk, etc.

Biz4all-2 social entrepreneurship training programme invites to participation. The free course will be held in Minsk for the second time. The BIZ4all-2 is practical-oriented; therefore participants will create viable products, conduct crowdfunding campaigns and do many home tasks. The organiser is ODB Brussels in partnership with foreign partners. The program shares the success stories of the first Biz4all participants.

Human rights activists launch a campaign of monitoring local elections, following the official announcement of local elections set for 18 February 2018. Despite the campaign’s proposals, numerous recommendations of the OSCE ODIHR, as well as the work of an interdepartmental group created by the Central Election Commission (CEC) to improve the electoral process, no changes have been introduced to the electoral law.

Four reporters of Belsat TV channel put on trial together. All of them were sentenced to fines for a total amount of 1,500 euro on 30 October. Thus, freelance journalists have been fined 50 times for their work without accreditation since the year start.

For two years Belarusian universities expelled 20 students for political reasons. According to the Belarusian student organisations, experts in the field of higher education and human rights activists, after three years Belarus’ accession to the Bologna process, the minimum progress has been achieved – Belarus has fully complied with only two out of 15 points. The least progress is observed in academic freedom area.

RADA AWARDS 2017. Belarusian National Youth Council RADA announces the nominations for RADA AWARDS, designed to honour the best Belarusian youth initiatives and activists for 2017. Until 1 December, anyone is welcome to fill in an online form and nominate herself/himself or other initiatives for the award. The festive ceremony will take place on 17 December. 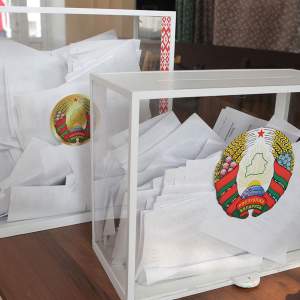 Belarusian experts Jaŭhien Prejhierman and Piotr Piatroŭski opine that a pause in Eurasian integration is necessary until the members resolve current controversies. The government announces the date and details of the 2018 local elections.

The experts call for a pause in Eurasian integration. Narodnaja Hazieta, a newspaper, provides the opinions of Belarusian experts Jaŭhien Prejhierman and Piotr Piatroŭski on the state of the Russia-led Eurasian Economic Union (EEU). In just a few years, the EEU overcame several development stages that took the EU several decades: a customs union, a single economic space and an economic union. However, the result is that none of these platforms operate properly. Each contains numerous barriers, exceptions and limitations. Member states do not fully implement agreements. Deadlines for eliminating exemptions from the single market are continually postponed, including oil and gas prices, which are particularly sensitive for Belarus.

This simply contradicts the spirit of the alliance and violates the interests of the participating states. Instead of bringing member states together, it increases strategic uncertainty and vulnerability. Therefore, if the countries really want to build a strong mutually beneficial union, there must be a respite from further integration. It is for this reason that Belarus has proposed a moratorium on any new decisions in the EEU until the implementation of previously reached agreements.

Elections to local councils will be held on 18 February 2018. The state plans to allocate about $10.5m for election funding, but Belarusian President Alexander Lukashenka has urged the authorities to save rubles anywhere possible, writes Belarus Segodnia, a daily newspaper. The Chairman of the Central Commission for Elections and Republican Referendums, Lidzija Jarmošyna, announced the government has no obligation to invite international observers to elections to local councils.

Nevertheless, the President underlines the special role of observation and offers a possibility for short-term observation to all foreign diplomats accredited in the Republic of Belarus. Organisations that interact with international structures in the field of local self-government are allowed to invite experts and observers from partner organisations, too. Jarmošyna also said that since business plays an essential role in the life of our country, it should be well represented within local councils.

The Defence Ministry has instituted major changes at the Piečy training centre after a brutal hazing incident allegedly led to the death of private Aliaksandr Koržyč. It ordered the replacement of the junior command staff and sent 20 sergeants from the 3rd and 307th schools to other military units.

Uladzimir Makaraŭ, the press secretary for the Defence Ministry’s Ideology Directorate, assured the public that the transfers will not spread hazing practices. Those who carried out and were involved in the hazing activities are already under investigation. After the death of the soldier, the Investigations Committee (equivalent to the FBI in the United States) opened 15 criminal cases against officers stationed at the Piečy training centre. 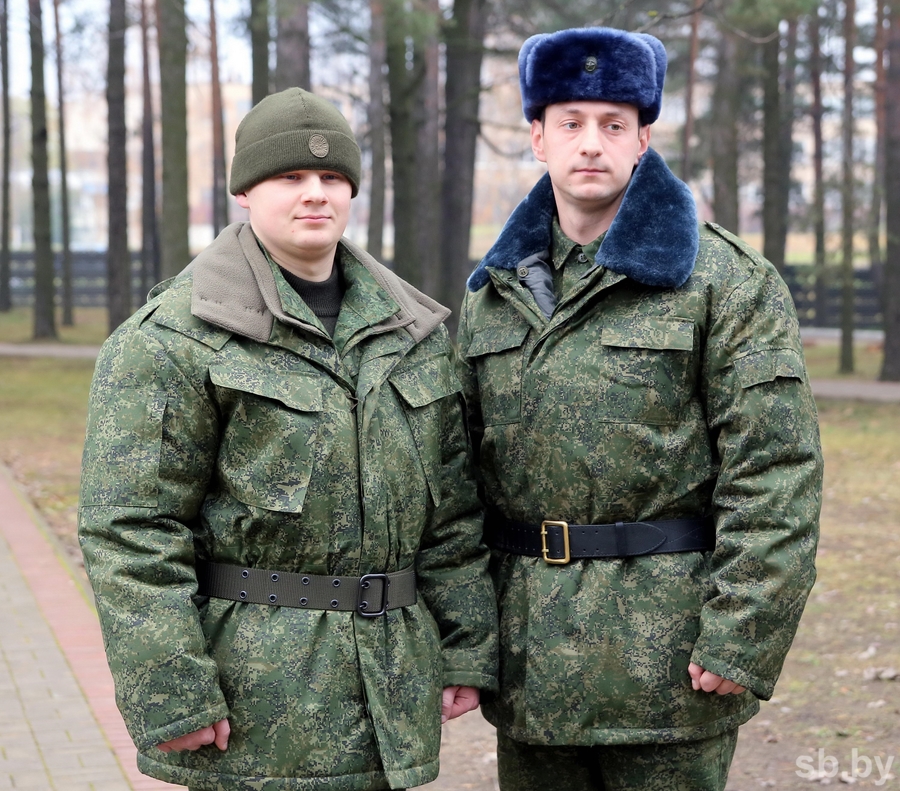 New (left) vs old (right) uniform. Photo: sb.byThe Belarusian army changes its uniform. The reform aims to make the uniform more lightweight and practical. Many servicemen will be able don new winter garb in a month. The traditional Soviet hat with ear-flaps known to many generations will be dismissed and replaced with a crocheted hat.

The jacket collar will turn from fur to fleece, which is cheaper and several times lighter. The costly black leather belts will be replaced with protective colour textile belts. In total, the new uniform is lighter by a third. Recent research by the Defence Ministry has shown that lighter and higher quality materials make soldiers more capable.

The Belarusian Astraviec nuclear power plant (NPP) successfully passed its stress test. The Emergency Ministry’s Nuclear and Radiation Safety Department has published a national report on the results of a series of stress tests for Astraviec plant, reports Zviazda, a state-owned daily newspaper. The tests checked the resistance of the NPP to threatening phenomena that can hypothetically happen in Belarus: strong winds and squalls, tornadoes, large hail stones, dust storms, strong blizzards, ice, fog, drought, as well as combinations of these phenomena.

According to Department Head Volha Luhoŭskaja, the NPP at Astraviec is resistant to emergency situations similar to Fukushima. The NPP, which is constructed to the latest generation Russian ‘3+ design,” fully meets the highest international safety standards. Belarusian specialists have already submitted the report to the European Group for the Supervision of Nuclear Safety and the European Commission for international review.

Belarus improves its anti-corruption record. An interdepartmental conference at the Academy of Public Administration discussed anti-corruption law application and its further improvement in Belarus. Transparency International states that in the corruption perception index, Belarus rose from 107th place to 79th in 2016. A survey of Belarusian economists conducted among small and medium-sized businesses shows that the actual rating of the country is much higher and is at the level of Poland, Lithuania and Slovenia.

One newspaper claimed that international experts regard Belarusian anti-corruption legislation as some of the most progressive and effective in the world. Prosecutor General Aliaksandr Kaniuk pointed out that the country is currently implementing policies that minimise corruption: limiting state interference in business, easing firefighting, sanitary, environmental and other requirements, abolishing administrative checks, simplifying procedures for obtaining certificates, approvals, and other permits.

The opposition speakers claimed that the role of the Belarusian language can be improved only through its wider use at the highest levels of education. Officials responded that forced Belarusianisation will lead to its rejection by the citizens, and therefore soft methods should be used in this process.