In March, analysts at the Ostrogorski Centre focused on the unfolding protests against the ‘social parasite’ tax and the Freedom Day celebration, which led to a violent response from the Belarusian security services and the arrest of more than... 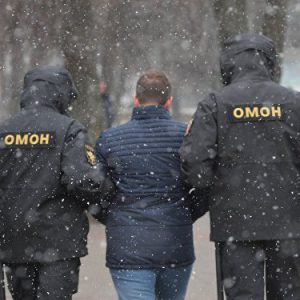 In March, analysts at the Ostrogorski Centre focused on the unfolding protests against the ‘social parasite’ tax and the Freedom Day celebration, which led to a violent response from the Belarusian security services and the arrest of more than two dozen suspects as a result of alleged planned armed resistance.

The Centre has released an analytical paper entitled ‘The state of distance education in Belarus: problems and perspectives’, which resulted from the Fourth Annual Dutch-Belarusian-Polish Conference.

We have also published podcasts of the Second Annual London Conference on Belarusian Studies.

Yaraslau Kryvoi discusses how the West can respond to the violent crackdowns which occurred on 25 March during protests in Belarus. Because EU presence and leverage in Belarus are very weak, the menu of responses is largely limited to the reintroduction of restrictive measures and reduction of high-level official contacts. On the other hand, visa liberalisation, as well as support for Belarusian civil society, education, media, and entrepreneurs should at least continue to receive support, since progress in these areas primarily benefits the Belarusian population. 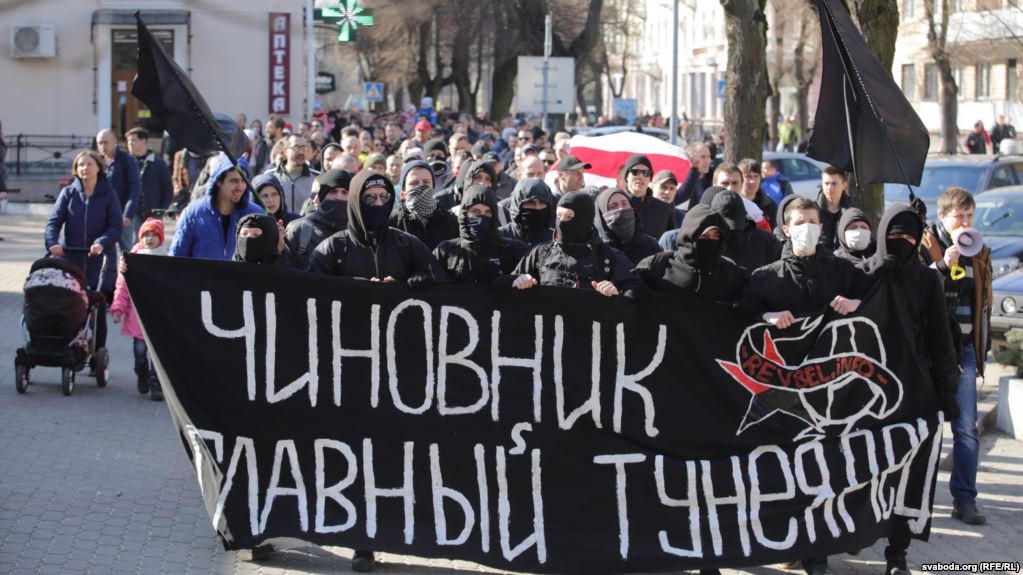 Alesia Rudnik analyses the role of anarchists in the recent protests against the ‘social parasites’ tax. Anarchists were one of the most noticeable movements at the protests in Brest and Minsk, causing an immediate reaction from the police. Their creativity and integration distinguished them from other groups during the last two weeks of protests. The regime draws an analogy between anarchists and the football fans in Ukraine who strongly resisted the government during Maidan.

Igar Gubarevich discusses the problems of Schengen visa facilitation for Belarus. Simplification of the visa regime for Belarusians has been jeopardised by bargaining between Belarus and Europe over who should bear the risk and cost of migration. This bargaining may take years. In the meantime, EU countries are still capable of easing the visa procedure for Belarusians within the framework of existing visa rules. This could mean reducing wait time, simplifying paperwork requirements for frequent travellers, and further increasing the share of multiple-entry visas and their duration of validity.

Analytical paper: The state of distance education in Belarus: problems and perspectives 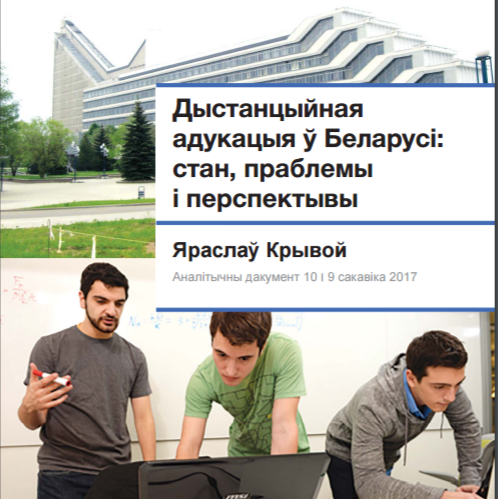 In order to create a high-quality system of distance education in Belarus, it is necessary to create a corresponding legislative base, to organise additional training for specialists in the sphere of education, and to expand the cooperation between universities and the companies that work in the high tech sector

Read the full paper: The state of distance education in Belarus: problems and perspectives.

Podcasts of the second Annual London Conference on Belarusian Studies

Ostrogorski Centre has published podcasts of the conference, which are available here.

On Polish radio, Alesia Rudnik discusses women’s rights in Belarus. Belarusian women are not aware of existing discrimination and this mind-set is encouraged by the state. Technically speaking, women are present in Belarusian politics, but they do little more than support the status quo when it comes to gender issues. Women’s organisations remain small and fail to cooperate with the state, society, and female politicians.

Ryhor Astapenia comments for Thinktanks.by on the causes and consequences of the brutal measures of the police during recent protests. This is unwarranted violence, since the protests do not pose a real threat to Lukashenka’s regime. Normalisation of relations with the West is likely to at least freeze, if not turn in the opposite direction. However, in the absence of a satisfactory solution to the ongoing oil and gas conflict, Minsk is unlikely to reconcile with Moscow. 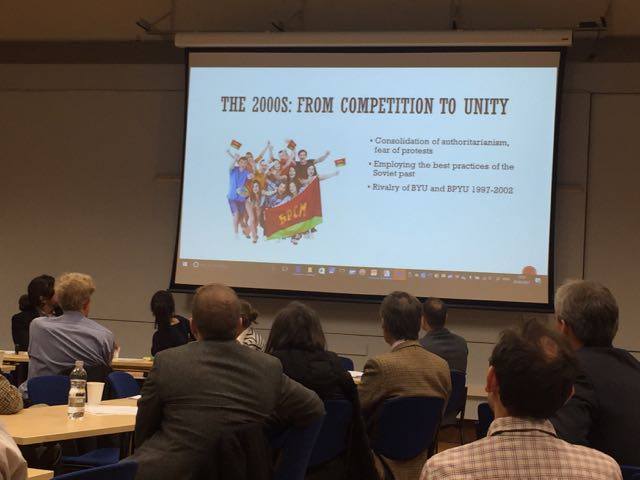 Igar Gubarevich discusses the problems of visa regime facilitation between the EU and Belarus on Polish Radio. Scared by the influx of migrants, the European Union demands that Belarus sign visa facilitation and readmission agreements in one package. However, the threat of migration coming from Belarus seems exaggerated. Meanwhile, the visa issue remains crucial for the citizens of Belarus, who receive the largest number of visas per capita in the world.

Siarhei Bohdan discusses what Minsk traded for the newest Russian fighter jets on Polish radio. Minsk would like to reduce the scale of the military exercise West 2017 and the tense rhetoric of Russian officials. In return for the drills, Moscow offered something very important to Minsk. Delivery of a few aircraft in the near future seems to be the final argument which won Minsk over.

Macroeconomic stabilization on shaky ground – digest of the Belarusian economy 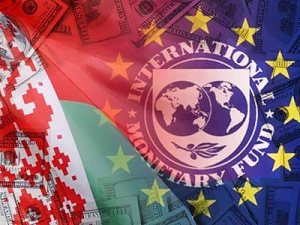 In this context, on 6 March a new IMF mission arrived in Belarus in an attempt to encourage the authorities to implement further economic reforms.

Meanwhile, insufficient efforts at liberalising the private sector still hinder the emergence of a new pillar of the Belarusian economy.

Economic data for the first two months of the year show mixed results. On one hand, industrial production and exports have improved (see Figure 1). 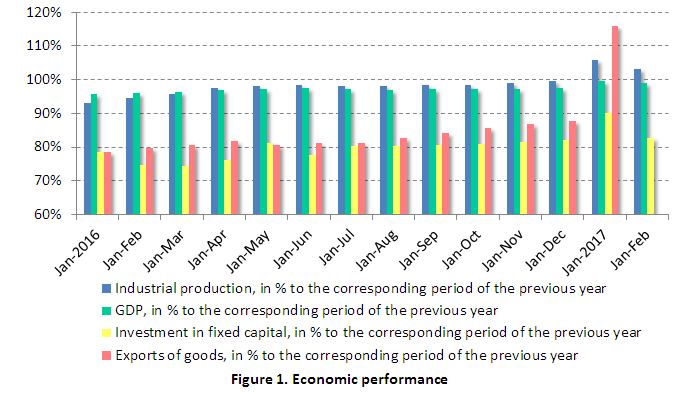 On the other hand, the government continues to postpone measures which would aid in the financial recovery of enterprises. Authorities are also putting off fundamental decisions on structural reform, thus prolonging the economic recession.

For example, investment demand remains in deep trouble, shrinking for the 14th quarter in a row. During the first two months of 2017, it dropped by about 17.4 per cent year on year (see Figure 1).

Therefore, during the rest of the year, the economy faces the delayed effects of investment depression, such as reduction in output due to the reduction of production capacity; this affects such important industrial enterprises as Gomselmash, MAZ and MTZ. Moreover, firms facing financial losses influence not only the amount of investment and production, but also the employment rate and wages.

To address the latter issue, on 21 March President Alexander Lukashenka banned job cuts without the initial approval of local authorities. The promised $500 average monthly wage for 2017, however, remains off the table (it currently hovers around $370).

Therefore, taking into account the implausibility of reducing SOE costs, the painful process of sustainable stabilisation of their operations will be postponed even further.

For these reasons, the entire economy will take even longer to emerge from economic imbalances. Given the prospects of economic dynamics, such a pattern means that in 2016 the 'price' for structural weaknesses remains unpaid, and structural corrections will continue in the upcoming months of 2017.

The financial system: feeling the pressure of the money shortage

Under these conditions, on 16 November 2017 representatives of the IMF once again discussed the terms for a new credit programme with Belarusian authorities.

Six months before, during the IMF's previous visit, the economy was experiencing a long-lasting recession which called the stability of the banking system further into question. However, this time the National Bank of Belarus (NBB) tried to win over its sceptical visitors.

Judging by the results of the report, Belarusian banks are sufficiently strong. Banks would feasibly survive even a 30 per cent devaluation of the Belarusian ruble.

However, independent experts believe that the stability of Belarusian banks depends mostly on the state of public finances, first and foremost because struggling state-owned enterprises urgently need fresh money to repay their debts. According to the NBB, in 2016 SOEs contributed to a total of 81 per cent of bad-asset growth in the banking system.

Nevertheless, before signing a new credit programme with Belarus, the IMF will still insist on implementation of decisive structural reforms in the near future, regardless of what official figures say.

For example, SMEs' share in the Belarusian GDP accounts for approximately 30 per cent, which limits competition on the domestic market and leads to inefficient allocation of both material and labour resources. In contrast, according to the World Bank, in other developing countries this parameter ranges from 60 to 75 per cent of GDP.

In this light, on 2 March 2017 a new presidential decree intending to improve the procedures of state registration and liquidation of economic entities was launched. The document limits the right of the tax ministry and other authorised bodies to invalidate the state registration of a business entity or its liquidation through the court to three-year periods.

The head of the Association of SMEs, lawyer Syarhei Balykin, considers the decree a progressive step, but he thinks that by and large it will make things easier only for official registrars. Moreover, according to him, this legislative act partially degrades the position of entrepreneurship.

For example, the document actually limits possibilities of creating new companies. In particular, the decree prohibits the registration of new business entities for founders of liquidated entities or for those going through bankruptcy proceedings.

In addition, the principle of collective responsibility (meaning that all of a given company's co-founders bear responsibility for violations in economic activity of any individual co-founder) still remains in force. In the opinion of Syarhei Balykin, such restrictions violate the rights of entrepreneurs to implement business projects.

The last month has shown certain positive trends in the stabilisation of industrial production and exports. However, the Belarusian economy still struggles with problems with its banking system, lack of external finance, and the unresolved issue of increasing private sector involvement.