To measure development, HDI underscores the importance of “people and their... 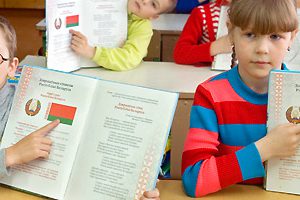 To measure development, HDI underscores the importance of “people and their capabilities” rather than economic metrics. It combines three dimensions of development: population health, access to knowledge, and the standard of living.

Belarus scores extremely well on the knowledge dimension. However, it does far worse on population health and the standard of living, the other HDI components. It appears that Belarus boosted its HDI ranking largely by prolonging the time its population spends in school.

Premature death of Belarusian men constitutes the main problem. Men in Belarus live an average of 66.6 years, an entire decade shorter than women.

The number has decreased since the 1980s and is now two years below the world average. About half of Belarusians who die prematurely have been smoking, drinking, or both.

Do Belarusians enjoy a decent standard of living?

The HDI standard of living component uses the logarithm of gross national income (GNI) per capita. The logarithmic transformation reflects the diminishing importance of income with increasing GNI.

Belarusian IT specialists earn the highest wages (around US$1,500 per month). Despite Belarus's small size, regional income gaps persist. Minsk residents earn nearly 1.5 as much as the residents of Mahileu, the poorest part of Belarus. 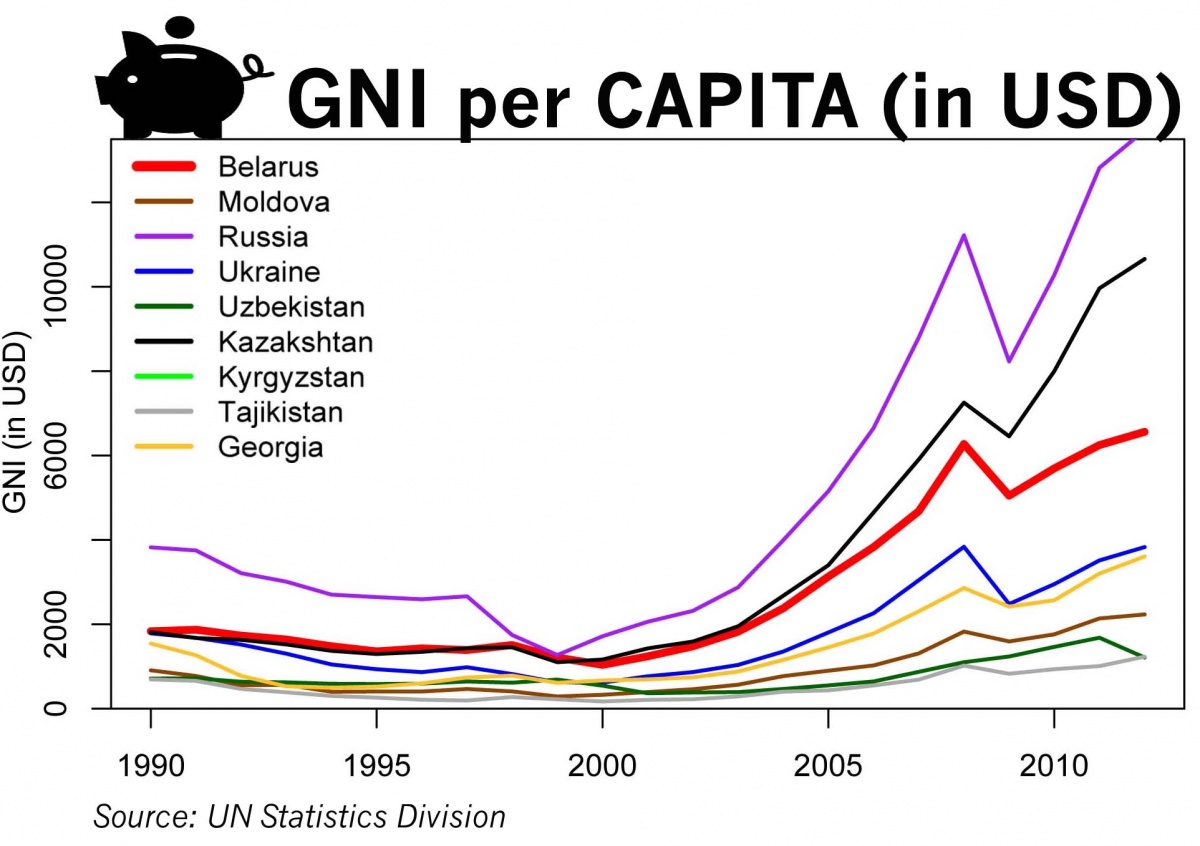 Even though Belarusians’ incomes have grown, they are lower than the incomes in Belarus’s Customs Union partners – Russia and Kazakhstan. Moscow remains a key destination for Belarusians searching for higher-paying jobs.

How useful is education for Belarusians?

Education is where Belarus excels. An average Belarusian attends school for eleven-and-a-half years. Belarusian children are expected to study for nearly sixteen years – only two years fewer than the maximum number of years allowed in the HDI education scale.

Belarusians have the Soviet Union to thank for their current educational success. Unlike other colonial powers, the Soviet Union sought to eradicate illiteracy and made education free for all. In the Russian Empire, which since the 18th century incorporated two thirds of today’s Belarus, literacy rose from 56% in 1916 to 99% by the 1970s. All Soviet states provided eight years of compulsory education.

All post-Soviet states have retained high enrolment in primary and secondary education to this day. The Soviet education legacy gives Belarus a leg up over many developing countries in Asia, Africa, and Latin America.

Over half of the Belarusian population aged 25 and older has attained a tertiary education, which is greater than in all countries of Central and Eastern Europe except Russia, where nearly two thirds of the population have attained tertiary education. For comparison, only one fifth of Poles and less than a third of Lithuanians have tertiary degrees.

Is such a high rate necessary? Belarusians with tertiary education make up 13% of the unemployed in Belarus, according to the World Bank. Indeed, in 2008 address to the nation President Lukashenka said that Belarus needs more “carpenters and joiners” than people with university degrees.

The length of time spent on a school bench is not synonymous with the quality of education either. Gauging the performance of Belarus’s education system is impossible since Belarus does not participate in any international assessment programmes, such as PISA scales, TIMSS and PIRLS comparisons. If the results in other post-Soviet states are assumed to be representative, Belarus’s performance would average to poor.

In 2014 the Belarusian State University ranked 763rd in the Webometrics Ranking of World Universities. While the Belarusian media framed the ranking as making the top 3% of all universities worldwide, the 763rd position is low when considering that many developing country universities rank higher, and that BSU is by far the best Belarusian school.

Choosing a point of reference

According to the UNDP report, Belarus’s HDI of 0.786 exceeds the average of 0.735 for countries in the high human development group (there is also a very high development group). The report compares Belarus to Serbia and Azerbaijan, countries with similar population size and in the same geographic region. Belarus’ rank of 53 indeed compares favourably with these countries’ respective rankings of 78 and 76. 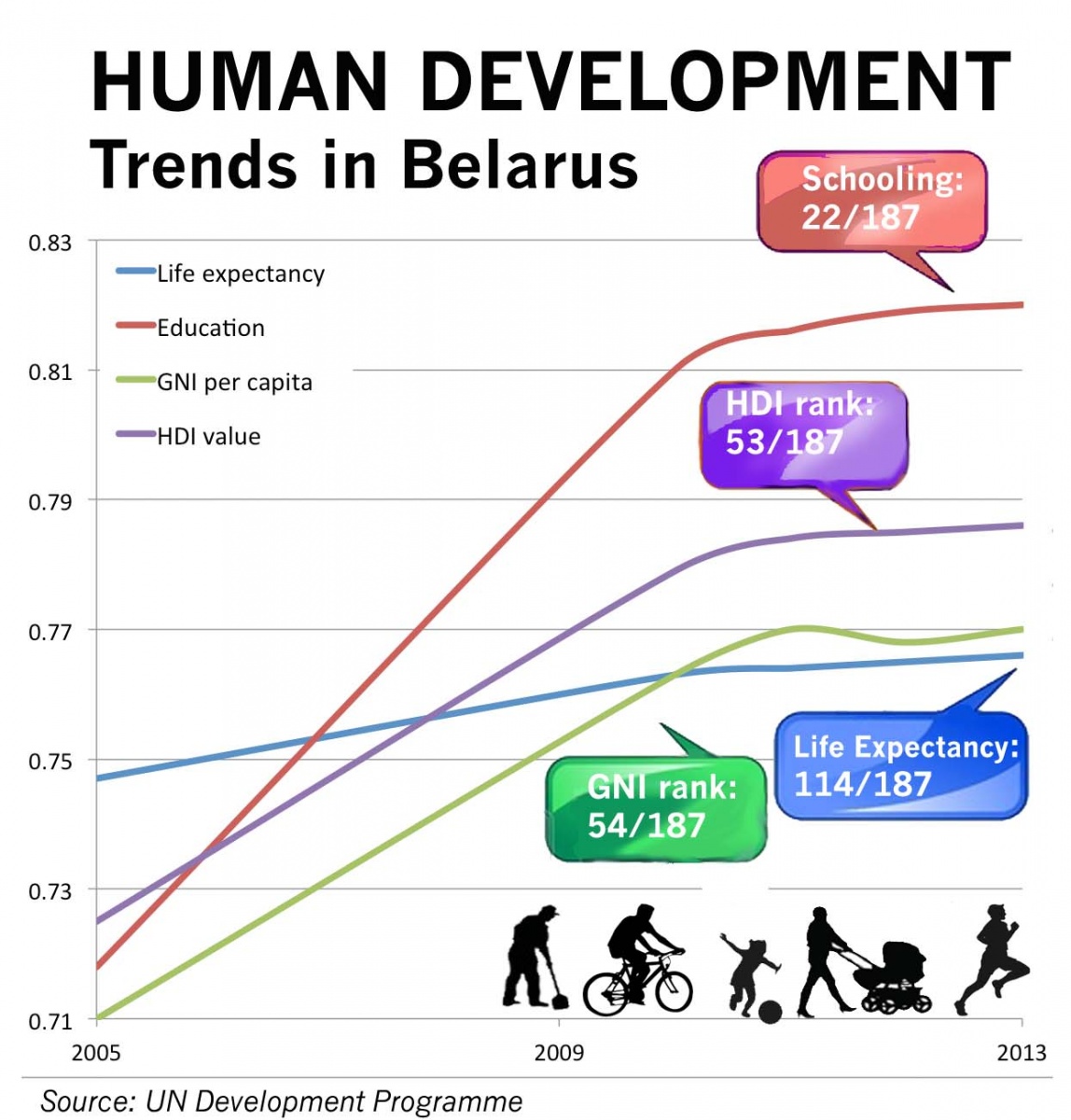 The data clearly shows that Belarus outperformed all other post-Soviet states. But should Belarus set the bar so low? Were Belarus to look to its democratic neighbours to the west, a very different picture would emerge.

In 1991, Belarus and Poland had equal life expectancies. Today Poles live five years longer on average. In 1991, GNI per capita in Belarus was $2,000 less than in Poland. Today the income gap is nearly three times greater.

Ironically, Belarusians flock to shop in Poland because many goods and products (excluding cigarettes and alcohol) cost less across the border.

Belarus has beaten Poland only in the expected years of education – Belarusians entering school today will be studying a few months longer than Poles. Of course, the quality of their education may not be any higher than that in Poland, since Belarus does not participate in any international education quality assessments.

While Belarusian sausage may contain no toilet paper, Belarus still has a long way to go in terms of improving the lives of its people. And yet, because of the weights used in the HDI calculation, a country with maximum GNI per capita and life expectancy would rank lower than Belarus if its population were uneducated.

Because of the mathematics behind HDI calculation, a country with the highest GNI per capita and the longest life expectancy in the world would get a maximum score of 0.666 – or much lower than Belarus’s 0.786 HDI – if its population were uneducated.

A more lasting solution for Belarus is to improve public health, reform the economy, and not least, equip students with the skills they need to succeed in the workforce, rather than just a degree. 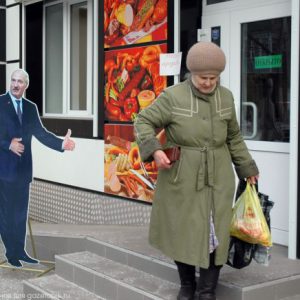 The Belarusian economy received the brunt of the Western press' attention in October. Belarus is apparently looking to continue exporting sanctioned EU foodstuffs to Russia, while Russia is trying to stop it from entering the country. The IMF is still very sceptical about Belarus's economic situation and is not willing to provide it any financial support without serious reforms.

Lukashenka spoke to journalists and voiced his concerns about Russia's behaviour towards Ukraine, while a freelance journalist was fined for writing about the illicit food trade on the Belarusian-Russian border. Dozens of Belarusian and Ukrainian football fans were detained by police after a match where they sang a famous inflammatory song about Vladimir Putin.

Lukashenka assured reporters that Belarusian sausage was not cutting corners with any hidden additives in their products, unlike their Russian counterparts. All of this and more in this edition of the Western Press Digest.

Czech Business Heading for Belarus – Czech trade with Belarus has grown 167% over the past 5 years and is a leading destination for Czech business reports the Prague Post, referencing a local business newpaper article. Belarus has invested substantial sums into improving its infrastructure which has gone a long way in attracting Czech business to it. Czech exports are mainly technology related and include machinery, computer technology and equipment for telecommunications and other technology or transportation related goods.

Czech firms find that their Belarusian counterparts are prompt in making payments and it is easier to to do business with them than, for example, Ukraine. Several large projects, including a hydro-electric station in Grodno, have been completed by Czech firms with encouraging results. A bid to build a third line for the Minsk underground was recently made by a Czech company, a sign of their continued interest working inside of Belarus as well.

Russia Tightening Control Over Belarusian Food Imports – Reuters reports that a dispute is brewing between Customs Union members as Russia looks to enforce its sanctions on EU food product imports. The imports under question are not destined for Russia, but Kazakhstan. Russia is said to want all food imports that travel through its territory and are destined for Kazakhstan to be inspected by their own customs service.

Speaking to Russian news agency RIA Novosti, Head of Federal Service for Veterinary and Phytosanitary Surveillance Sergey Dankvert said that food products that are going through Belarusian territory are being re- labeled to hide their EU point of origin. Pork originating in Belarus may be banned as well according to Dankvert. Russian officials are concerned about an outbreak of African swine fever in Belarus.

Belarus Needs to Implement Structural Reforms if it Wants IMF Loans – Additional external financing from the IMF is very unlikely without serious reforms being carried out according to the International Business Times. The IMF says that a 20% inflation rate and high wage growth remain a symptom of poor policymaking on the part of the Belarusian government. While some basic steps have been taken by the authorities in Minsk, no serious structural reforms appear to be underway, including privatisation. With Belarus's trade balance set to worsen once more, its economy is in for a rough times ahead.

Belarus Growing More Concerned about Russia – In a blog for the Wall Street Journal, journalist Nick Shchetko says Belarus is starting to become a little more guarded in its relationship with Russia. Quoting recent comments that Aliaksandr Lukashenka made during a 5 hour long conversation with journalists, Shchetko notes that Lukashenka has been critical of Moscow's behaviour towards Ukraine, but been careful not to step over the line.

Lukashenka, the blog states, is being particularly mindful of next year's presidential election as he looks to prolong his rule over the eastern European country. In closing his talk with the journalists he issued a veiled statement to intellectuals using crude language, reminding them to remember where they come from and apparently placing some of the blame on the relatively low level of development in the country on them.

Police state that 41 fans were arrested on charges of "mild hooliganism" or "drinking in a public place", though a local independent newspaper said that more than 100 individuals were detained. At the time of the report, 12 Belarus fans had already been released after paying a fine.

DW Reporter Fined €​500 by Belarusian Court – Several recent cases against journalists writing for foreign media have been popping up in Belarus. DW reports that the official reason for these fines being leveled against the reports often has to do with their not receiving the proper accreditation, a notoriously difficult process in Belarus which the OSCE has criticised. The freelance Belarusian Alexander Burakov was fined for the "illegal generation of a product for the mass media."

Burakov wrote a story for DW's Russian-language service on how food traders were managing to get around Russia's import ban on foodstuffs of EU origin. Before the case began, the accreditation issue was mentioned before the hearing began by the presiding judge. Another journalist was fined €​400 by a Belarusian court. The fine is apparently in connection with a report they made for Polish radio.

Belarusian Sausage: Made without Toilet Paper – Radio Free Europe/Radio Liberty reports that Belarus's charismatic head of state cleared the air with Russian reporters on the quality of Belarusian sausage. Lukashenka said that unlike Russia, Belarus had maintained a high level of food inspection and quality since it gained independence from the Soviet Union. Russian food producers, however, have been known to have "toilet paper, soy, all kinds of additives". RFE/RL notes that both toilet paper and sausage were in low supply at the end of the Soviet era.