Yarik Kryvoi 15 April 2022
The 7th Annual Conference on Belarusian Studies conference took place on 18–19 February 2022 in the hybrid format. It was organised by UCL School of Slavonic and East European Studies, the Ostrogorski Centre and the Francis Skaryna Belarusian Library... 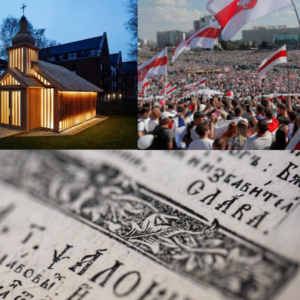 The conference attracted over 70 participants from 11 countries, including speakers from the United Kingdom, Belarus, Germany, Czech Republic, the United States, Poland and other countries. The conference of the programme is available here.

Below you can watch videos of presentations and conference discussions. Selected papers will be published in the Journal of Belarusian Studies.

Moderator: Dr Alena Markova
• Dr Ge Yin – New Exploration of Belarusian State Development Theory and Practice – Analysis of the Relationship between the Sixth National People’s Congress of Belarus and the Modernization of the State
• Aliaksei Kazharski – Belarus as a Liminal Space for Russia’s Ontological Security Before and After the 2020 Protests
• Dr Fabian Burkhardt and Dr Jan Matti Dollbaum – Deepening the Societal Divide? Political Attitudes towards Constitutional Reform in Belarus among Regime Supporters and Protesters

Moderator: Prof. Andrew Wilson
• Olena Nikolayenko – The Role of Motherhood in a Presidential Race: The Case of the 2020 Election in Belarus
• Olia Sosnovskaya – The Poetics and Politics of Interruption in the 202-21 Uprising in Belarus
• Rashed Chowdhury – The Role of Religion in the Belarusian Protests of 2020
• Vital Byl – Enchanted Revolution: the Supernatural and Occult in the Belarusian Crisis of 2020-2021

Keynote address: Complexity, Resilience and the Political: Understanding the Many Crises in Belarus – The Annual Lecture on Belarusian Studies: Professor Elena Korosteleva

Moderator: Dr Dzmitry Suslau
• Tania Arcimovich – The Performance “Paulinka” (1944-2021) as a Struggle for the Memory
• Tatsiana Astrouskaya – Contesting the Power in the Women Prison Memoirs: Evgenia Ginzburg and Larysa Heniush on their Survival and Resistance in the Gulag and After
• Yu Shirun – The Soviet Regime from the Perspective of Public Crisis – Take the Chernobyl Accident as an Example
• Hanna Chuchvaha – Memory, Trauma, and the Maternal: Post-Apocalyptic View of the Chernobyl Nuclear Disaster

Rising costs of defiance: Number of political prisoners in Belarus hits a record 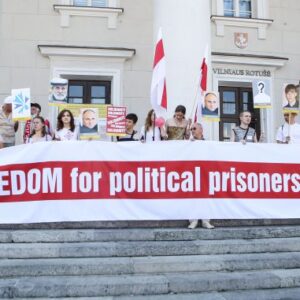 The number of political prisoners in Belarus appears to have increased by 550 per cent in just over a year. As of 12 April, human rights defenders estimate their total at 1,118 people.

The cost of protesting and demonstrating dissent in contemporary Belarus is rising. Over the past two years, short administrative detentions and fines have turned into infinite pre-trial terms and criminal charges that carry years in prison. In 2021, the court sentenced Belarusian bloggers Eduard Palchys and Ihar Losik to 13 and 15 years in prison respectively for allegedly “organizing mass riots” and “inciting hatred.”

Harsher punishments and no rights

In early April, the media reported a serious deterioration in Marfa Rabkova’s health while in custody. Rabkova, once an activist at the Viasna Human Rights Center and now a political prisoner, currently does not receive qualified medical care. She is being persecuted for her human rights activities and political views. She may face up to 20 years in prison on trumped-up charges. 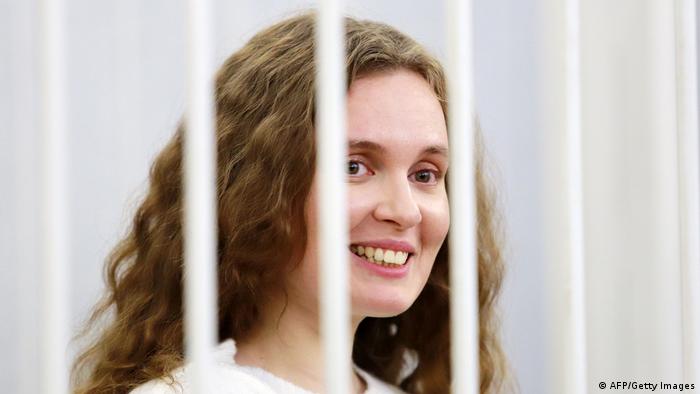 Prisoners whose terms are almost over find themselves facing additional charges. This appears to be a tactic to demoralise current prisoners and intimidate others. For instance, journalist Katsiaryna Andreeva has five months of her prison term remaining. Andreeva is serving time for her live broadcast of a police crackdown on peaceful protests in 2020. Now, she faces new criminal charges of high treason, which carries up to 15 years in prison. Neither the media nor her family knows of any further details.

Updates about life behind bars are uncommon. Western media tends to notice only prominent cases that cause a public outcry, such as the recent hunger strike of philosopher Uladzimir Mackevich. Colleagues of Mackevich ran a support campaign for him on social media to generate attention. But Alexander Lukashenka’s regime does not appear worried about generating condemnation—domestic or foreign.

Since 2020, people behind bars have been subject to torture, arbitrary treatment, psychological pressure, deprivations, lack of communication, and prohibition of the right to write and receive letters. Political prisoners are often forced to wear yellow identity tags and they are included in special registers for those being “prone to extremism or to hostage-taking.”

In June 2021, out of desperation, political prisoner Sciapan Latypau attempted suicide by cutting his own throat while in a courtroom session. Latypau had acted following torture in detention and after threats to his family and neighbours.

Who can be considered a political prisoner? 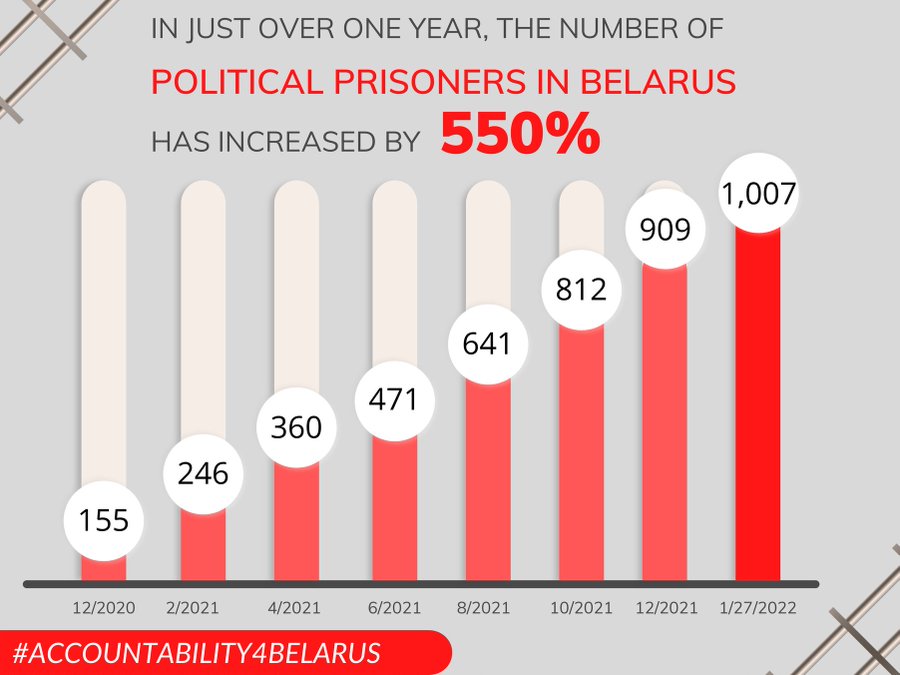 Back in October 2013, leading Belarusian human rights defenders, including the Viasna Human Rights Center, the Belarusian Helsinki Committee, the Barys Zvozskaŭ Human Rights House, and others jointly agreed on a definition for who can qualify as a political prisoner. The key criteria include detention due to “political, religious, or other beliefs” or activities aimed at defending human rights and fundamental freedoms. A person cannot be a political prisoner if he or she has committed violent offences, hate crimes against a person or property, or called for violent actions.

The Belarusian human rights community usually issues a joint statement on identifying someone as a political prisoner. For those in prison, this status means their story and circumstances tend to gain more consistent media attention.

Some Belarusian human rights initiatives, including Dissidentby, Politzek.me, and diaspora associations suggest the 2013 political prisoner definition needs revision.  They want to account for the Belarusian state’s arbitrariness and for the impossibility of a fair trial. For instance, many in prison for their political views are not recognised as political prisoners, because they face charges of violence against policemen.

Viachaslau Kasinerau, the founder of Dissidentby, notes the Belarusian authorities have learned to set up provocations for activists and protestors. Often their reactions to the planned provocation exclude them from political prisoner status. In addition,  prisoners’ confessions cannot be relied upon, because detentions often involve the use of force and torture. Kasinerau argues any list of political prisoners should include those who try to resist the security forces’ violence.

What can be done? 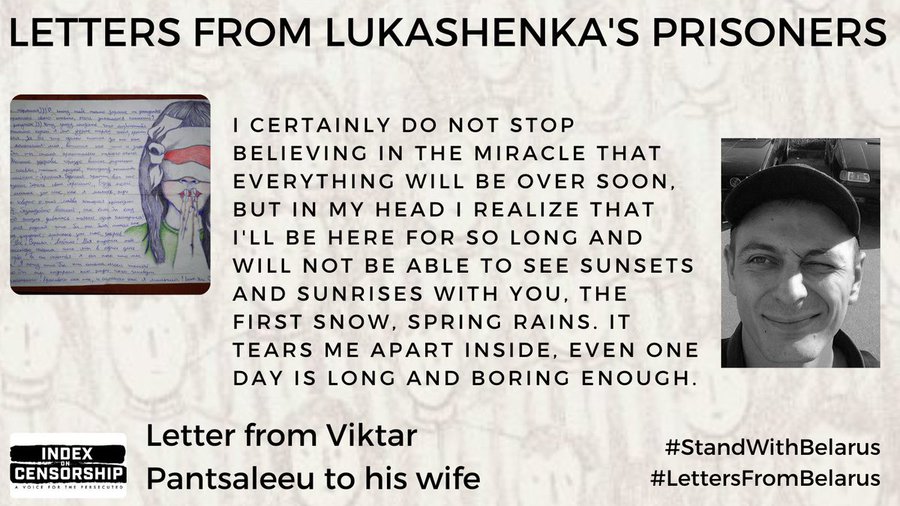 Natallia Hersche, a Swiss-Belarusian dual national, was sentenced to 2.5 years in prison for participating in protests in Belarus. Due to the efforts of the Swiss government, she was freed after 17 months. Hersche’s release followed after Switzerland sent a new ambassador to Minsk, who presented her credentials to Belarusian Foreign Minister Uladzimir Makej. But the exact conditions of her release remain unclear. To date, no other European ambassador has agreed to present their credentials in Belarus after the 2020 rigged elections and the violence that followed.

As long as the EU does not back up calls for the release of political prisoners with further steps (such as concrete legal action), it will have scant leverage against the Lukashenka regime. UN High Commissioner for Human Rights Michelle Bachelet recently stated that in the absence of justice in Belarus other states must hold perpetrators accountable through domestic proceedings on the principles of extraterritorial and universal jurisdiction. It is still unclear whether the global community feels up to the task, especially considering the ongoing challenges of reacting to the war atrocities committed by Russian troops in Ukraine.