Automobiles, Trains and Buses – Getting Around Belarus

For the first-time visitor from the West, a scheduled flight to Minsk provides the most direct means of access to Belarus. Some venture no further than the capital itself, yet getting out of Minsk and beyond the façade of... 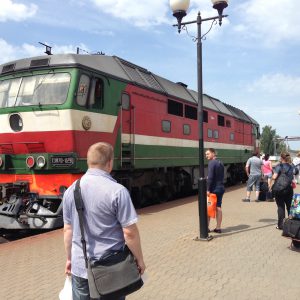 For the first-time visitor from the West, a scheduled flight to Minsk provides the most direct means of access to Belarus. Some venture no further than the capital itself, yet getting out of Minsk and beyond the façade of tourism offers the traveller a glimpse of the way of life of ordinary Belarusians.

Whether sharing food and vodka with strangers on a five-hour train journey from Minsk to second city Homiel, or helping the driver collect fares on a local bus ride from village to village, leaving the capital behind can make a genuine traveller out of a tourist.

Situated 25 miles east of the city on an extension of the M2 motorway, Minsk National Airport has been greatly refurbished of late. A glorious monument to brutalist Soviet architecture, all is now bright and shiny.

A number of options provide access into the city. A forty-minute taxi ride costs around $50. Buses run by carrier Minsktrans (www.minsktrans.by) depart from outside the terminal building to the city’s central train and bus stations, with limited stops along the way. The journey takes around one hour with a fare of $2. A train service also now operates, but the journey still takes around an hour, with a necessary short bus ride from the terminal to the airport railway station. Expect to pay a fare of $1.5. 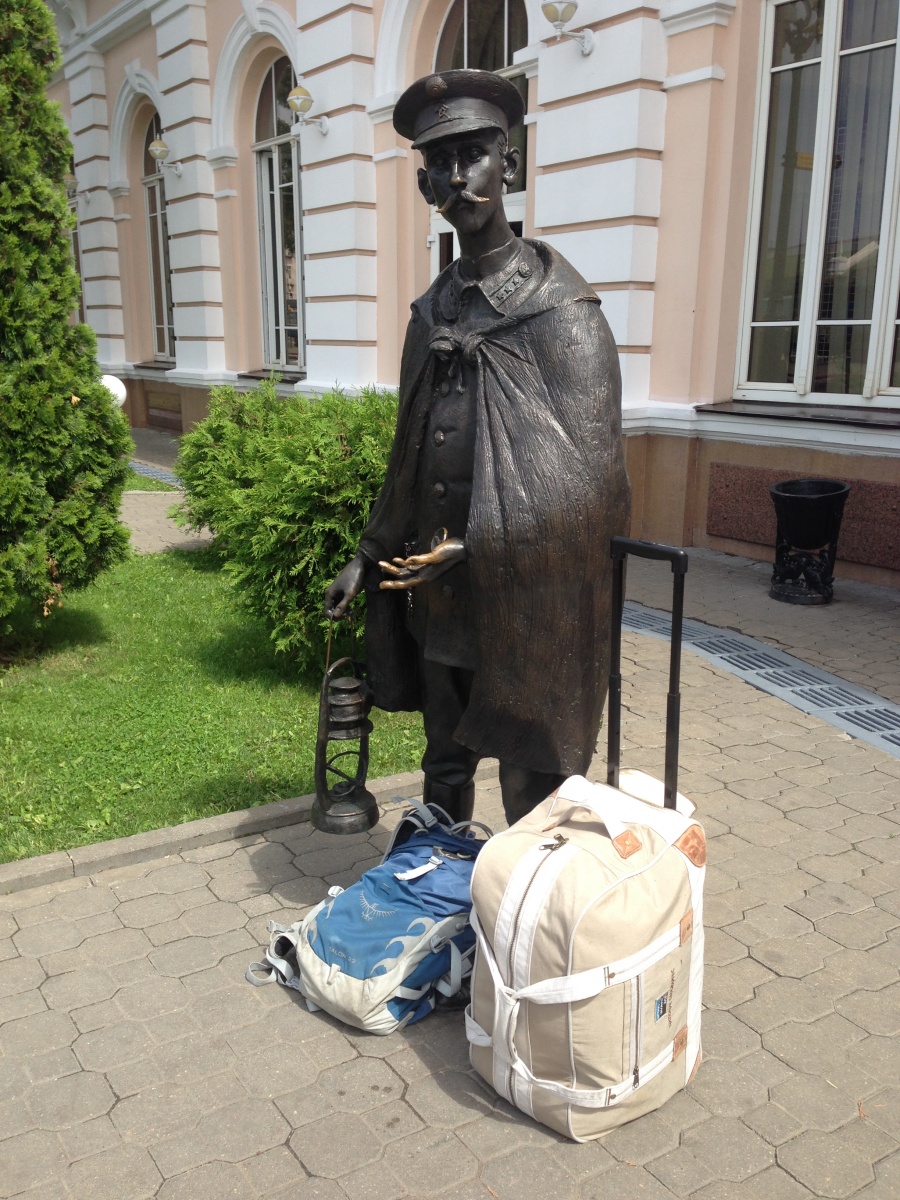 Within the city itself, travel by metro, bus, tram and trolleybus is extremely cheap, reliable and safe. Each journey costs around $0.25. Tickets can be purchased onboard and from kiosks, shops and post offices all over town. Contactless smart cards are now available for multiple journeys. Full information on Minsk transportation can be found on the Minsktrans website.

There are currently no domestic flights within Belarus.

Travel by road offers a generally stress-free experience and motoring represents no more risky an enterprise than elsewhere in Europe. The M1 motorway from Brest to Minsk forms a section of the pan-European E30 highway from Ireland all the way to Russia, so expect very heavy freight along this route, with the occasional hazard of extravagant (indeed, reckless) overtaking manoeuvres.

One particularly charming route can be found on the back roads north from Brest to Hrodno along the Western border of the country. A journey of 150 miles through ancient villages, the route skirts the eastern edge of the magnificent Byelovyezhskaya Pushcha National Park.

Hand-in-hand with a major road improvement programme that is still work in progress comes the advent of a state-of-the-art electronic system for the collection of tolls (‘BelToll’). Full information is available on the system’s helpful website (www.beltoll.by). Local domestic vehicles less than 3.5 tonnes are exempt from payment.

Car hire presents no difficulty. Expect to pay anything from $300 to $600 for a week’s hire, dependent upon the size of vehicle. A number of major international operators have desks at Minsk International Airport, with more at several of the city’s hotels (particularly the new ones). All offer online booking facilities in advance. When collecting your vehicle, be sure to produce not only your national driving licence but also an international driving permit.

Once on the road, you will need to pay before filling up at the gas station. Fuel costs are around half of the price payable in the UK.

Officers of the local militia rigidly monitor speed enforcement. They are particularly enthusiastic out in the country. Wherever you are, stick to the limits. If not, a spot fine and rigorous scrutiny of your documents awaits.

As in the days of the Soviet Union, trains in Belarus still leave on time but are often slow and rickety, particularly (and perhaps surprisingly) on the major lines between cities. For example, the journey from Minsk to Homiel can take over five hours (eight on the overnight sleeper). The journey to Brest takes between three and a half and five hours. The fares are cheap, starting at $6 for a single ticket on the Minsk-Homiel route, and $5 on the route to Brest. This represents the art of slow travel at its very best, with opportunities to gaze out of the window for hours on end as you slowly rattle across the landscape. 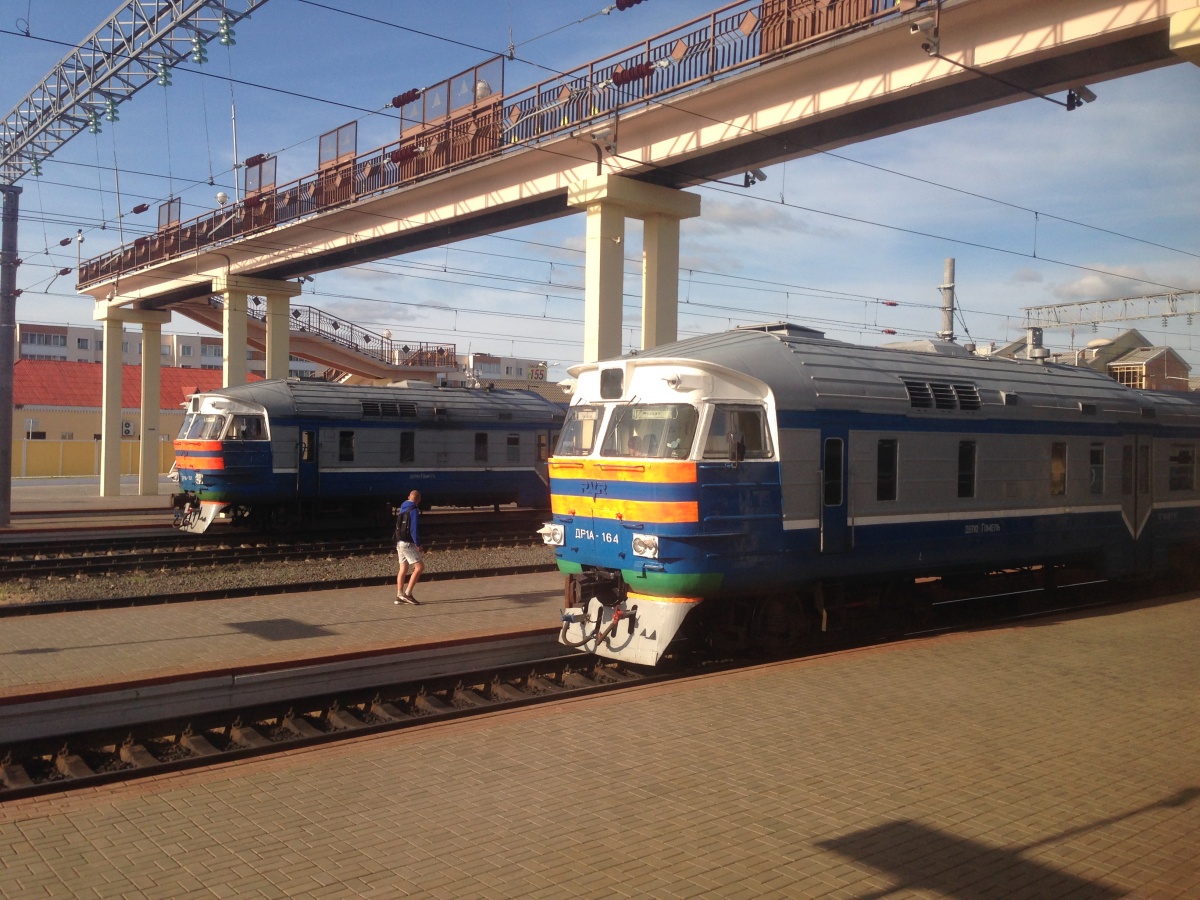 A night journey on the inter-city sleeper affords an excellent way to meet people. You will likely be sharing a four-berth compartment with people you don’t know, but you can also expect to share stimulating conversation and company, as well as your fellow travellers’ food and vodka. Ensure you have something to offer in return. Staff will offer bed linen for hire at very cheap cost.

The route between Minsk and Vilnius now offers an all-together more modern service. At between two and a half and three hours, journey times have been almost halved and the new rolling stock boasts much enhanced comfort. The cost of a single ticket is $16-20. With a number of budget airlines offering fares to Vilnius from various locations in the UK that can be as little as 35-40% of the cost of a flight from London Gatwick to Minsk with state airline Belavia, this provides an attractive alternative for entry into Belarus.

For information on timetables and schedules operated by the Belarusian state railway service, go to www.rasp.rw.by. To buy advance tickets online, visit www.poezd.rw.by.

Information on national services and the 23 international routes departing from Minsk’s Central Bus Station can be found at www.minsktrans.by. Tickets can be purchased in advance on www.ticketbus.by, though these pages are in Russian only.

Suburban and rural bus services are operated by state-owned Minsktrans and other local providers, side-by-side with services by private minibuses (marshrutka). Tickets can be purchased at the bus station of departure or onboard in the case of marshrutka. A minibus will often stop wherever it is flagged down on suburban roads and between villages. If you are sitting at the front, expect to be kept very busy collecting fares and dispensing change for the driver, as wads of notes are passed over the heads of passengers.

Bus travel often feels crowded, hot and claustrophobic, particularly by marshrutka, and for this reason my own preference is to travel by train. That said, a ride on a packed minibus will get you closer to feeling like a local than any other mode of public transport. Official statistics show that around the country, 4.3 million passengers travel by bus each day along 4,290 routes. Do not be surprised if it feels that all 4.3 million are riding the same bus as you … 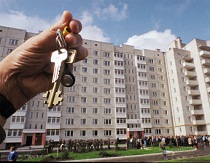 In 2015, prices for Belarusian apartments fell by about a quarter. Yet few Belarusians can afford to purchase an apartment even at this cheaper price. Interest rates are incredibly high, reaching 30-35% per annum. Banks also impose loan requirements that are hard to satisfy for an an average citizen.

An average flat is just 26 m2 of space, according to the National Statistical Committee of Belarus. The square footage area is lees than other countries in Northern Europe. According to the Eurostat, on average a German has 43 m2 and a Swede has 44 m2 for their living space. Not surprisingly, many in Belarus dream of owning a separate flat.

Why the Housing Issue Remains so Important

Buying an apartment remains out of reach for ordinary Belarusians due to the combination of sky-high prices and high interest rates on apartment loans, which reach about 30-35% per year. In order to receive a loan for at least a part of an apartment, one needs to earn around $1000, or twice the average salary in Belarus.

Many young families have no choice but to live with their parents. Take the example of Maxim Komich, 25, who lives in Vaukavysk, a small town in the western part of the country. Komich told Belarus Digest that he, his wife, their child, his wife’s brother and her parents live together in a two-room apartment. Komichs company forced him to take an unpaid leave because of the lack of work. As a result, he can no longer afford renting a flat.

Many prosperous Belarusians invest in real estate because Belarus offers few other investment opportunities and because they distrust Belarusian banks. They want to buy something real, something they can touch, a place of their own.

For the authorities, attuned to the people's mood, real estate construction remains one of the chief priorities. In his program ahead of the 2010 presidential election Lukashenka promised to build 10 million square metres of flats annually between 2011 and 2015. On average, the authorities build about half of the required flats.

Lukashenka had also promised that an ordinary young family would be able to buy an apartment in the next five years since his 2010 campaign. This promise remains unfulfilled to this day. While an average flat in Minsk, with two rooms, costs around $70,000, the average monthly salary in Minsk is just $530 today.

The Crisis on the Housing Market 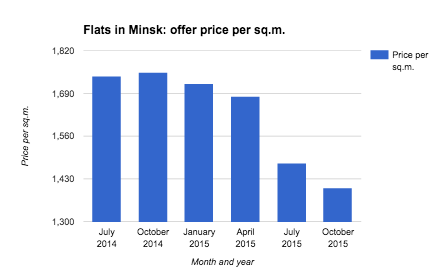 Belarusian statistics do not allow us to trace the fluctuation in the prices of real estate over time. Pavel Astapenia, the owner of “Expert” real estate agency in Minsk, told Belarus Digest that insiders estimate real estate prices to have fallen by a quarter. In Minsk, the drop in prices may have been slightly higher.

Accurate figures for the decrease remain unknown, as Belarusian flats have two prices: the offer price and the price of actual transaction. People usually sell apartments for less than they first wanted. The price settled upon in the end is not reflected in the statistics. According to Pavel Astapenia, today the difference between the two prices reaches up to 10%.

The fluctuation in real estate prices once more confirms the extent to which the economies of Belarus and Russia are connected. The changes in price in Moscow's real estate market reach the Minsk market 4-6 months later. These changes are then reflected in the real estate prices in the Belarusian province.

In spite of the fall in prices, the number of purchases remains stable this year compared to 2014. This may be the result of deferring demand. Many people have delayed buying an apartment for a long time, waiting for lower prices. But next year, as Pavel Astapenia told Belarus Digest, the demand for apartments may also drop. 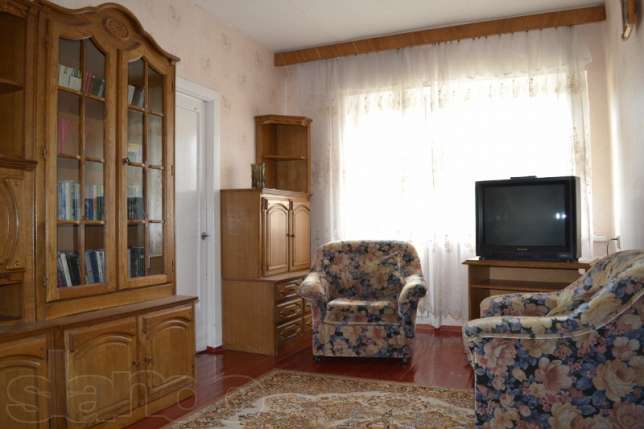 For Belarusian real estate agents this crisis presents a far bigger problem than would be the case in other countries. The Belarusian government fixes the rates of payment for service, so agents in Belarus earn from 1 to 3% of the purchase price.

This remains a fairly low figure by European standards, and in Ukraine or Russia payment for real estate agents can even reach 10%. Many sellers became desperate because of the crisis. Because of that they are willing to pay huge sums to real estate agents who can find a client. Belarusian agents struggle with fronting these high costs, and some of them may be forced to leave the profession next year.

The regulation of payments for real estate agents is just one example of how the Belarusian state dominates the housing market. Not only does the state regulate profits, but state enterprises also build 90% of Belarusian apartments. The state's dominance in construction may change if the economic crisis deepens, however.

The promise of affordable housing has been one of the key electoral slogans for the Belarusian president. Lukashenka's rhetoric is changing, however. Unlike his program from the Presidential elections in 2010, the president's 2015 manifesto lacks references to government housing programmes. With construction of flats slowing down and crisis deepening, fewer and fewer Belarusians will be able to afford their own flats.