Be a Man, not a Sheep! – Belarus Civil Society Digest

Thanks to recently launched applications Belarusians can now complain to the authorities in a less formalised way. One of them, Comfortable City, helps creating appeals and petitions to the state bodies. 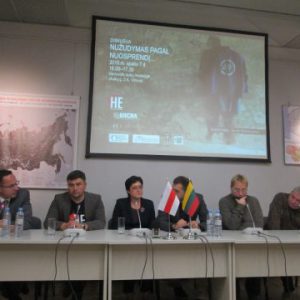 Thanks to recently launched applications Belarusians can now complain to the authorities in a less formalised way. One of them, Comfortable City, helps creating appeals and petitions to the state bodies.

Be a Man, not a Sheep! – a new project Studwatch.org encourages students to protect their rights.

Pact launches a series of memos based on community polls in Belarus. It can help to better understand the needs and challenges of local communities.

New online platforms for appeals to state bodies. Minsk web programmer Valery Koldachev launched the web site One-Window-Online, which allows to send information about problems in Minsk to the state body that can fix it. This week one more online platform has been launched – Comfortable City that helps creating appeals/petitions to the state bodies and collect signatures under them. In both cases appeals have a legal force so officials should respond them. The similar online projects already work in Belarus for some years –e-appeals to state bodies Zvarot.by and complaints on roads Belyama.by.

Pact releases first in series of Belarus community polls. This week, Pact begins to release a series of memos based on community polls in Belarus. The first memo is dedicated to the village of Komarovo, and will be followed by five additional memos released before the end of 2015. Pact’s goal for the community polls is to provide easy-to-use feedback directly from a local community in order to better understand community development (supply) needs and challenges. A local research company, SATIO, carried out the first community polls. The Russian-language version of the analysis is available at the web site of Pact's Community Development Fund.

Charitable auction of meetings MajeSens celebrated 4 years of its activity in October. To the moment, the platform has collected about 320 thousand dollars for charity issues. MajeSens allows everybody to put up a meeting with him/her or to win meeting with other person. The money obtained is transferred to a charitable project, available at the web site.

New manual on capacity building for Civil Society Organisations. New Eurasia Establishment presents the first edition of its manual "Diagnosis and Planning of CSO Capacity Building", developed in the framework of Strengthening the Capacity of Joint Initiatives project. The manual is designed specifically for Belarusian CSOs and intended for managers and leaders of organisations and consultants.

New project Studwatch.by encourages students not to be afraid to protect their rights. Among the tools the organisers suggest to become election observers, report on violations to human rights defenders in the elections, disseminate information, etc. The slogan of the new project: Be a man, not a Sheep.

European Parliament held a discussion on relations between the EU and Belarus after the presidential elections. On 14 October discussion was organised by the EaP Civil Society Forum and the European Parliament delegation for relations with Belarus. The Belarusian side was represented by Anna Herasimova (the Belarusian Human Rights House), Vladimir Dunayev (Public Bologna Committee) and Andrei Yegorov (Centre for European Transformation).

Independent observers developed a mobile device for easy collection of information from voters through smartphones. Application named as Vochy/Eyes informs on voting rights and creates a mobile platform for the transmission of information on violations of the election independent observers. The collected information is published on the web site of the national monitoring of the election campaign electby.org, known in Belarus since 2010.

Minsk development plan draws attention. On 14 October Minsk municipality presented to media a new General Plan of Minsk 2030. The presentation also sparked the interest of more than a hundred citizens that joined the meeting. And as a follow-up, several civic initiatives join forces to protect their communities from Minsk City Council.

Supreme Court denies BCD’s complaint. The Supreme Court has denied the complaint about the Ministry of Justice lodged by the steering committee for the creation of the Belarusian Christian Democracy party. The BCD steering committee wanted to appeal the refusal to register the party. It is the fifth time the BCD has been refused registration as a party. The BCD has also tried registering as a civil organisation 19 times.

Blogger Anton Matolka wrote a letter to Minister of Internal Affairs Ihar Shunevich. He is asking to explain the legal grounds of arresting citizens with national symbols (the white-red-white flag and the emblem Pahonia). 5 people were detained in Barysau Arena on 12 October and a man who had a white-red-white flag in his car was stopped by driving inspectors the day before.

Beltelecom proposes the independent websites an additional protection from DDoS-attack on the Election Day. Namely, the state-run telecommunications operator has made the relevant oral proposition to Nasha Niva, Onliner.by and TUT.by. The service is free. Thus Beltelecom wants to be saved on charges of blocking and DDoS-attack.

Russian air base protesters summoned to court. The participants of the unauthorised action For Peaceful, Neutral Belarus gathered about 400 people in the centre of Minsk on October 4 stand trial in Minsk's Central District Court on 9 October. Leader of the UCP Anatol Liabedzka, ex-presidential candidate Uladzimir Niakliayeu, former political prisoner Mikola Statkevich and several more activists have been summoned to court.

Alcohol as a Tool of Authoritarianism in Belarus 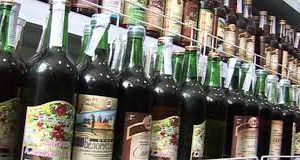 According to the World Health Organisation Belarus holds the first place in worldwide alcohol consumption. Yet the authorities ignore this significant national problem; their recent policies may be making it even worse.

At the end of August, Minsk authorities lifted restriction on selling alcohol between 10 p.m. – 9 a.m. The restriction had come into force just two months earlier. But the Ministry had ordered that all stores should have the favourite drink of Belarusian alcoholics, cheap strong wine, on their shelves, which undermined the restriction.

Despite a huge problem with alcoholism in Belarus, the authorities seem unwilling to implement anti-alcohol policies consistently. They use it both as a tool to calm social discontent and the government benefits from this tremendously profitable business through tax. No wonder that on the election days polling stations are well-stuffed with cheap alcohol.

Was It Merely an Experiment?

On 25 August Belarusians were surprised to learn that the government removed the time restriction for selling alcohol between 10 p.m. – 9 a.m., which it had introduced two month earlier.

This step took place a few days after Lukashenka's meeting with top officials to discuss the production and sale of alcohol. He criticised the government for export decreases and the growing shadow market. Alcohol has been traditionally a lucrative sector for the state budget. But it has thinned because increasingly the private sector has occupied a large share of the market. Likewise, counterfeit Russian alcohol has infiltrat​ed Belarus, especially into Belarus's eastern regions. The Ministry of the Interior estimated the shadow annual market of counterfeit alcohol at $200 m.

The Ministry of Trade's shortly thereafter ordered all alcohol stores to sell Belarusian the lowest quality wine that is produced in Belarus (known as charnila). For a long time the Ministry of Interior and the Health Ministry have long struggled to ban this product.

Moreover, at the end of September the deputy Minister of Trade Viačaslaŭ Drahun revealed that restrictions on the Internet sale of cigarettes and alcohol may end in the near future. “This restriction narrows the possibilities of citizens who prefer online purchases, and also impedes trade for domestic producers of alcohol”, the official said. Since 2005 Internet trade of cigarettes and alcohol has been illegal in Belarus.

In 2014 the World Health Organisation reported that Belarus has maintained the first position in the world on alcohol consumption, with 17,5 litres of pure alcohol per capita. 170,000 alcoholics are officially registered, accounting for 1,8% of the whole population. But health experts say the actual number of abusers could be ten times that number. 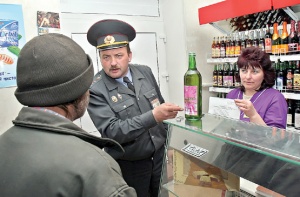 According to the General Prosecutor's office report in 2014, intoxicated offenders commit 80% of murders in Minsk region. In May 2015 the police reported that the number of domestic murders rose by 67% compared to 2014, and in 90% cases it happened as a result of drinking. The statistics for grave injuries also show that in 80% of cases the offenders consumed alcohol.

Alcohol remains one of the major reasons for high suicide rates, as Belarus traditionally is close to the top position of number of suicides worldwide. It also causes high rates of orphanage, because the authorities tend to take children from alcoholic parents in most cases. Obviously a huge problem for the whole nation, alcoholism requires immediate and serious measures. But the policies to combat alcoholism look very inconsistent in Belarus.

The Ministry of Interior, the General Prosecutor's office and the Health Ministry lobbied firmly for anti-alcoholism policies, while producers insisted on the opposite.

In 2011-2015 the government has been implementing the national programme for combating alcoholism. The official statistics claim the programme has yielded visible results: the annual consumption of alcohol fell from 12,22 to 10,47 litres of pure alcohol per capita (the official statistics differ from the WHO as it counts all the population, while the WHO counts only people aged over 15).

Belarus bans sales of alcohol during graduation ceremonies at schools and harvesting time in villages. Companies cannot advertise alcohol except beer in the media and in public places, and drinking in public is an offence. Domestic alcohol prices are only slightly lower than in Poland and Lithuania, and higher than in Russia and Ukraine.

However, easy access to alcohol makes these policies ineffective. While Belarus has one alcohol sale point for 550 people, Poland has one for 12,000 and the Scandinavian countries one for 25,000. Charnila, a cheap strong wine made from apples, remains very popular and protected by the government.

The government has attempted to ban charnila since 2013, but producers apparently persuaded Lukashenka to block the implementation of this measure. “This ban will not work, just think about its consequences”, Lukashenka said in November 2012. Now, every store must have this particular wine on its shelves according to a Ministry of Trade August decree. It means thousands of Belarusians will continue to destroy themselves with low quality alcohol. 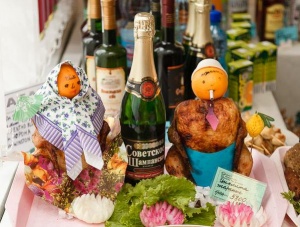 It appears that the government lifted alcohol restrictions a month before elections and flooded the stores with wine as a conscious political step to calm the population during the ongoing economic crisis.

Belarus​'s authorities have always applied minimum pressure on society before elections and during economic difficulties. For instance, at the time of 2011 economic crisis alcohol was one of the few products not to increase in price.

Strikingly, unlike countries which ban alcohol sales during elections, in Belarus rich buffets with ridiculously cheap alcohol and food became a tradition at polling stations (photo from the 2015 presidential election).

Political reasons for such a policy seem clear, but the revenues from selling alcohol may play an even greater role. Alcohol producers remain among the top 15 taxpayers in the country, along with oil potash and tobacco companies. 7% of the budget of Minsk comes form alcohol sales. Needless to say this business is extremely profitable and looked after at the highest level of government. Most distilleries are state owned and those few that are private belong to people closely associated with Lukashenka, like Uladzimir Piefcijeŭ.

No wonder that in a currently shaky political and economic environment the authorities use alcohol to its full extent to help Belarusians forget their problems. As usually happens in Belarusian politics, short term benefits prevail over long-term calculation. In this case health and human potential of Belarusians suffer to keep the political status quo.