Belarus has become a...

Will the Belarusian Regime Fix the Problem?

Belarusian law enforcement agencies report that they solved 136 crimes connected with production or distribution of pornography in the first six months of 2012. Thirty of them concerned child pornography.

The Belarusian authorities appear to have taken the fight with pornography seriously and are likely to complete their goal. Time will show whether they can effectively mobilise Belarus' numerous security services to fix the problem. It is likely that the quantity of pornography produced and distributed in Belarus will decrease by several times in the next few years.

The Government Alcoholises the Belarusians 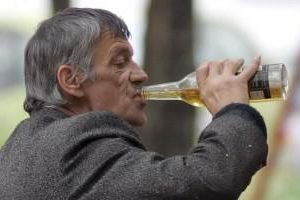 Lately many in Belarus talk about prohibition to sell cheap poor quality alcohol and fight against alcoholisation of population in Belarus. However, sales of vodka in Belarus amount to a half of the market share.

Moreover, the government as watchdog and owner of most of distilleries in Belarus is steadily increasing production of vodka over the last years, effectively guaranteeing one of the most sustained sources of raising money for the budget. It turns out that the campaign against drinking is in direct conflict with replenishment of the state budget?

According to the latest Belstat data, the vodka sales continue to expand in Belarus. Between January and October this year sales of vodka increased by 1.2 per cent as compared to the same period of last year. Ten and a half million dekalitres (dL) of vodka were sold; its share in the total volume of alcohol sold amounted to 49.8 per cent (45.6 per cent in the period between January and October 2011). The other half accounts for all other pleasures, i.e. fruit and berry wine, beer, liqueurs and spirits, wine and brandies.

The State Constantly Increases Quotas for Production of Spirits

The alcohol market in Belarus is subject to government regulations. Production and sale of alcohol are licensable activities. Therefore, the share of counterfeit goods in the market is very miserable if not nil. This positive element was repeatedly emphasised by experts from Ukraine, Russia and Poland at one of the recent international conferences.

At the same time, the government sets and, if needed, adjusts quotas for alcohol production. The quotas are based on alcohol consumption and the government programme of fight against alcoholism, we were told in the Beldziarzhkharchpram consortium.

However, the quotas for production of vodka and other liquor increase steadily. If in 2010 they amounted to 17.2m dL and in 2011 to 18.6m dL, in 2012 they increased to more than 20m dL. This upward trend takes place against the background of drop in production of fruit wines ("plonk" in common language), which represents simple substitution but not fight against alcoholism as it is presented by officials.

The Beldziarzhkharchpram consortium says that increase in production of spirits is oriented mostly towards export sales and not towards domestic consumption. However, export sales amount so far to less than 5 per cent. In 2011 1.3m dL of vodka and liquor were exported, and the plan for 2012 is 1.8m dL. The share of imports in the Belarusian market is small. It is 0.4 per cent for vodka and 3.2 per cent for liquor.

The main producers of alcohol are local companies most of which are government-owned. According to the data of the Beldziarzhkharchpram, since 2005 the number of vodka and liquor producers increased from 17 to 25 companies. Eighteen of them are controlled by the government.

The Belarusian producers of spirits can be divided into three groups.

The first is represented by a single company, Minsk-Kristall. This is the largest producer with 30 to 33 per cent market share. Also, achievements of the Minsk company were recognised at the international level. The same-name vodka of the Minsk plant, according to the magazine Drinks International, was rated 9th among the world's bestselling vodkas and got into the top 50 of the most sold alcoholic drinks.

Minsk-Kristall recently opened a 7,000-sq.meter logistic centre in Kaliadzicy. For this purpose, BYR 122.1bn ($14,3m) were spent, including BYR 88.9bn ($0,5m) of borrowed money. It is clear that the Minsk company should increase sales in order to recover the costs. One of the latest examples is resumption of bottling of alcoholic drinks under the Nemiroff brand at the facilities of Minsk-Kristall.

The second group of producers of vodka and liquor includes five major government-owned companies located in every administrative region of Belarus whose dwellers are their main customers. These are Prydzvinnie from Viciebsk, Belalko from Brest, Liquor Plant from Klimavicy, Radamir from Homiel and Niomanoff from Hrodna. Their total share is estimated at about 40 to 45 per cent.

The third group is private producers of spirits. This is the least representative group but three quite strong players stand out with total share of 17 to 20 per cent. First of all, one should note the Malinauscyzna Alcohol and Vodka Plant Akvadiv, which is located in the vicinity of Maladziecna. It is owned by companies of the pro-governmental businessman Uladzimir Pieftsijeu and Minks-Kristall. Such partnership between the private sector and the government assured Akvadiv a place among the top five producers of spirits.

Winery Dionis founded in 2003 by businessman Siarhiej Barok, previously an importer of alcohol, is also located in Minsk region. Its production facilities are situated in the vicinity of the town of Zaslauje. Despite the fact that the company has the word "wine" in its name, its 40° products are also sold with a bang.

Dionis will badly need additional resources in the near future. Siarhiej Barok must build a sailing centre for the government before 2014. In return for this, Dionis received a plot of land on the Pieramozcau Avenue in Minsk for building a health complex and a business centre.

The Minsk Winery is among the top three producers of liquor in the country. But shareholders of the Minsk Winery Siarhiej Litvin and Uladzimir Vasilko are not going to rest on their laurels. They are going to build a large alcohol-producing plant in Dziarzynski district.

As we can see, in the future Belarus is not going to decrease production of spirits. The fact is that this business is a steady source of raising money for the budget. The excise tax and VAT command a significant part (40 per cent) in the price of a bottle of spirit.

For Minsk region, Akvadiv is among major revenue-generating companies, for Homiel region is Radamir, and for Viciebsk region is Prydzvinnie. Belalko is the largest taxpayer in Brest region. Niomanoff and Klimavicy Liquor Plant are among the top three in Hrodna and Mahiliou region respectively.

Whether the authorities are interested in giving up a steady source of raising money for the budget and thus creating additional trouble for them is probably a rhetorical question.

Originally published in Russian on TUT.BY