20 June 2019
From 15 June 2019, the Museum of History in Minsk has been hosting a legendary exhibition ‘Amy Winehouse: A Family Portrait’ devoted to the life and music of the famous British singer. Late artist’s brother Alex with his family... 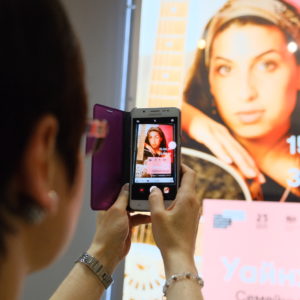 From 15 June 2019, the Museum of History in Minsk has been hosting a legendary exhibition ‘Amy Winehouse: A Family Portrait’ devoted to the life and music of the famous British singer. Late artist’s brother Alex with his family visited its grand opening. It was the first visit for the Winehouse family of their historical homeland since their ancestors left Belarus in XIX century.

The ongoing exhibition is the first and last public display of Amy’s personal belongings, from family photographs to fashion, in the former Soviet Union. After the exhibition ends on August 31st the artefacts will be returned to Amy’s family and other owners. The organisers also plan special events programme, including a tribute concert during the Great British Festival in Minsk, lectures on a Belarusian cultural heritage that will follow a bit later this summer.

According to the founder of the Belarusian-Jewish Cultural Heritage Center Maya Katznelson:

It’s important for us that Minsk can become the last city that will accommodate this unique exhibition. Thanks to the project, Amy’s family visited their historical motherland for the first time in their life. The public display will provide a more objective and full understanding of our cultural heritage. It will serve as a creative impulse for the current generation of people interested in Amy’s music and life, and also strengthen the image of Belarus as a very significant participant in a world’s cultural scene.

The centre’s mission is to encourage raising awareness about rich Belarusian and Jewish cultural heritage, reviving and popularising the names and accomplishments of an array of famous and prominent figures of Belarusian Jewish origin and developing modern forms of displaying this heritage. This project also aims to help in establishing a cultural dialogue and communication with people who originate from Belarus, various organisations and specialists, as well as international cooperation in the sphere of history, culture and arts. 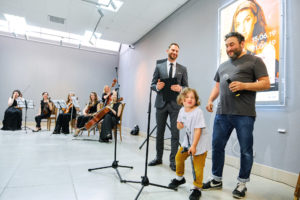 The choice of the capital of Belarus for the exhibition is not accidental. In 1891 the great-great-grandfather of Amy Harris Winehouse emigrated from Minsk to London and never returned home. The journey of the public display is somewhat symbolic, as it ends where the family history had started. The family comes back home after years of absence. The Winehouse family members are very fond of their Jewish background, hence the separate exposition wall devoted to a genealogical tree where this part of history is reflected.

‘Harris Winehouse had come to England from Minsk (Belarus) in 1891, and soon his family followed him. He travelled to London by mistake, as his original destination was New York, but even thinking that we could originate from somewhere else would be a bit ridiculous. One hundred twenty years later we are still here, and still proud of our roots’,  says the note written for the exhibition by Alex Winehouse.

The first public display was presented at the Jewish Museum in London in 2013 and managed to increase its attendance by 300 per cent, so it was taken further to San-Francisco, Vienna, Tel-Aviv, Amsterdam, Melbourne and other cities of the world.

The exhibition in Minsk has become possible thanks to joint efforts of the Goethe Institute, Belarusian Jews Cultural Heritage Centre and the British Embassy in Belarus initiated a Family Portrait exhibition. Some part of the funding was organised and raised from the crowdfunding platform Ulej. Later not just Amy’s fans, but also representatives of the Belarusian IT-community joined the cause. They are actively involved and support other industries in the country, like healthcare, education and culture.

The exhibition has become possible due to joint efforts invested by a software and gaming company Gismart that is also involved in music industry production, and a software company  Itransition, one of top-100 world outsourcing companies.

‘We are pleased to be a part of this large scale significant project. Gismart is already inspiring millions of people worldwide and helps to discover musical potential using mobile technology solutions. This exhibition is an opportunity for each Belarusian to receive a portion of this inspiration and touch creativity of such a legendary artist as Amy’, administrative director of Gismart Minsk office Yevgeny Nagel comments. 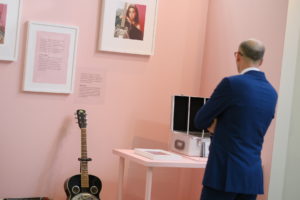 The exhibition organisers have already started looking for additional information about the Winehouse’s family ancestors in the national archives of Belarus. According to Fiona Gibbs, the British ambassador in Belarus:

joint efforts with the partners in organising this exhibit in Minsk will give the Belarusian people a chance to learn about Jewish and British identity of Amy Winehouse and find out more about her family. It’s a significant project both for Britain and its intercultural connections with Belarus. Amy Winehouse persona and the fact that her music unites millions of people in the world helps us establish a dialogue with representatives of different nations. That’s why the opening of the exhibit was honoured by a large London delegation, including Amy’s brother Alex and his family, as well as Abigail Morris – director of The Jewish Museum in London.

‘Technology, just like art is an area which unites people worldwide. When we found out that Minsk can host such a great exhibition, we realised that we could help this project become a reality. The exposition is based on original and very intimate items that belonged to this talented artist. This makes it particularly authentic and genuine’,  says Aleksey Demichev, CEO of Itransition.

The fact that this public display has become possible is partially influenced by the recent changes in Belarus visa regime which now allows 30 days visa-free stay for most European visitors in Belarus has had a positive impact on cultural life and global outlook of Belarus as tourist cultural hub. Events like Amy Winehouse exhibition prove that borders are starting to shift. Belarus is slowly evolving on an international scene and becoming a convenient.space for organising cultural and IT events. Hopefully. the trend will continue and Belarus will see more interest from the international community.

The controversy of the European Games: Price vs Prestige 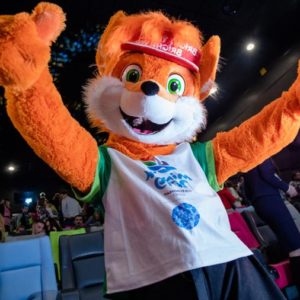 In preparation for the European Games 2019 on the 21st of June, Belarus has already spent the double compared to the planned budget – $112m for ceremonies, repair, volunteers, and other expenses.

The competition, organised by the European Olympic Committee, takes place for the second time in history and therefore has barely gained any popularity among sports fans. Some of the 15 sports in the competition are not the most popular nor followed sports. For example-  badminton, table tennis, and beach soccer. Hosting competitions in more popular sports, Belarus may have risked spending more than might get in return from the Games.

The Netherlands was the first to agree to host the Games. However, after the cost of the Games was revealed, the Netherlands backtracked from its promise and the European Olympic Committee turned to Belarus. After the Netherlands with a GDP of $912b. decided that hosting the European Games for them is too expensive, then the decision of Belarus with GDP $59b. seems rather surprising. 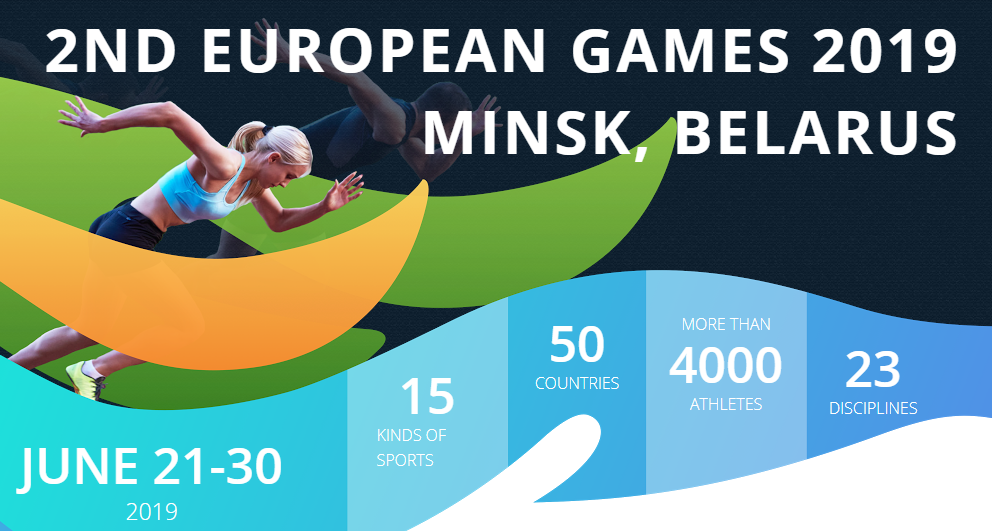 The Belarusian authorities barely hesitated before saying yes. While the announced $30-40m cost of the Games seemed reasonable to many, the real $112 m spent on the Games raises some questions.

For example, Belarus spent $12m for the opening and closing ceremonies, in comparison to Brazil that spent $21m for the many times bigger Olympic Games in 2016. According to Ideaby, each volunteer’s gear cost  $500 (the same gear cost 10 times less during the Euro 2012).

Although Belarus received financial support from the European Olympic Committee, Siarhei Rumas, the Belarusian PM, said that international sponsors have not rushed to invest into the European Games 2019.

The organisers of the European Games in Belarus expected to sell 190,000 tickets for the opening and closing ceremonies ($70-$150 per ticket) and competitions ($3-$27 per ticket), while only 69% were actually sold. The Belarusian officials announced they expect around 30,000 tourists to visit the Games. In the unlikely case that this number of tourist will attend Belarus during the European Games, it can barely compensate the money spent on the competition.

No-visa for tourists during the European Games

Belarusian authorities hoped that the European Games will attract more tourists. In addition to infrastructure renovations, Belarus also invested in creating a positive image of Belarus online. As a bonus, from 10th June to 10th July, residents from 98 different countries can visit Belarus visa-free through any border point if they purchased a ticket for at least one of the competitions or ceremonies. Due to fewer restrictions during the Games, foreigners can also travel across Belarus and enter the country through Poland or Lithuania.

“Flame of Peace” carried by the Belarusian athletes. Source: minsk2019.by

Even if the number of tourists visiting Belarus stays below expectations, training more people to speak English and opening of new entertainment places add into the positive image and progress of Belarus. Preparing to host foreigners, Belarusian service industry develops and improves for Belarusians themselves as well.

However, the management of the Games is still rather superficial and strange. The Games committee suggested accommodating athletes in student dorms. Meaning that students have to entirely move out from their rooms with their belongings.  Roads, house facades, sports arenas are only repaired prior to the Games, and not following the need. At the same time, the returns are not likely to cover the cost of hosting the Games.

Sports facilities, telecommunications, road network, passenger transport, student village – everything must meet the highest standards… We must once again show that comfortable and safe conditions for human life and self-realization have been created on our land.

As a part of opening up Belarus, authorities could have also included the popularisation of the Belarusian language, history, and traditions that are very hard for foreigners to distinguish from Russian at the moment. However, neither Lukashenka nor the Games Committee has highlighted this idea. Instead, in the Hrodna region, authorities installed informational signs devoted to European Games, where the text is in  Russian, Polish and English. The Belarusian language and culture would benefit from being distinguished from Russian and the European Games would have offered an excellent opportunity to do this.

Accepting to host the second European Games, the Belarusian authorities probably hope to soften its political reputation. In the midst of diplomatic conflict with Russia, caused by discussions on the integration within the Union state, the European Games could be seen by Minsk as a new tool for dialogue with European countries.

The presidential election in 2020 looks like another reason for Lukashenka to show the polished facade of Belarus. Creating a positive image of Belarus, which has invested a lot into the sports industry, might distract the discussions away from Belarusian authorities and their policies on the eve of the election 2020.

The decision to host the European Games appears financially inconsiderate, taking into account that Belarus spent almost twice as more than planned and tourists are not likely to reimburse even a third of the cost. Considering that a third of Belarusian population lives in poverty and the average salary in the country is around $500 (approximately 2 times less than in neighbouring Poland), conducting the European Games looks just cynical.

The Games may introduce Belarus to tourists that get a chance to visit the country visa-free from the 10th June to the 10th July. Though the visa-free regime has been functioning now for more than a year, the visa rules introduced for the European Games are much easier.

Hosting such an expensive event, the Belarusian authorities have put more importance on Belarus’s external image rather than the economy and its domestic needs in spheres like education, medicine, and social care.