The decision reflects a haphazard approach to fighting corruption. Belarus ranked 107 out of 168 countries in... 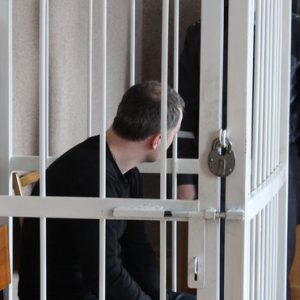 The decision reflects a haphazard approach to fighting corruption. Belarus ranked 107 out of 168 countries in a recent report by Transparency International, a non-governmental organisation that monitors corporate and political corruption in international development. Belarus ranks higher than Russia and Ukraine but much lower than countries of the European Union.

On 24 January, a new law on combating corruption came into force. New provisions include lowering pensions for corrupt officials and limiting the gifts that officials can receive and the business ventures their family members can engage in.

Perhaps most striking is a regulation offering awards to individuals who report corrupt practises – about $500 per violation reported, a considerable amount relative to the average wage in the country (between $400 and $600 per year, depending on the exchange rate).

According to the Belarusian Statistical Office, the number of prosecutorial investigations of corruption increased by 40% between 2011 and 2014 (from 581 to 817). The number of initiated criminal cases increased by 440% (from 32 to 141).

More and more influential people are being investigated. A recent example is the former Minister of Commerce Valiantsin Chakanau, the only cabinet official to lose his job after last year’s presidential election. He was arrested on corruption charges on 18 December 2015, the day after he was replaced at the Ministry of Commerce. He remains in prison.

… and why Lukashenka frees corrupted officials

Only 37.8% of Belarusians expect the new anti-corruption law to make a difference, according to a recent survey by the Independent Institute of Socio-Economic and Political Studies (IISEPS).

The public has reason to be sceptical. Over the past month, at least six officials imprisoned for corruption left prison ahead of schedule. Alexander Lukashenka not only pardoned them, but also appointed them to manage state-owned enterprises on the verge of bankruptcy.

The exonerated officials do not appear linked to one another, and each committed rather different crimes. For example, Viktar Khadasevich stood accused of stealing sausages from the meat processing plant he managed. Alexander Arkhipau, the former Deputy Attorney General, tried to close a murder investigation in exchange for a bribe. The court sentenced Arkhipau behind closed doors, so not many details became public. Lukashenka later stated that the bribe was “a bar of gold and a bottle of cognac.”

According to the state-run media, the five officials were freed at the behest of the Belarusian parliament. The parliament has apparently prepared a list of other persons for the Belarusian president to pardon. If true, more officials charged with corruption could be released from prison in the near future. The names of possible beneficiaries have not been made public.

In any case, the release and reappointment of the five officials demonstrates two important trends.

First, the authorities clearly lack qualified people to fill positions in state institutions, especially at the elite level. The authoritarian regime has pushed a large number of smart people to either leave the country or at least steer clear of government service. As economic analyst Serge Chaly puts it, "Nobody wants to be a minister in Belarus."

Perhaps the authorities have no choice but to create “penal battalions” of corrupt officials to manage loss-making enterprises. Indeed, such appointments are nothing new. In 2008, a Belarusian court sentenced the former chairman of state-owned petroleum and chemical conglomerate Belneftekhim​, Alexander Barouski, to five years in prison for embezzling $1.5 million in funds from his enterprise. A year later, Barouski became the general director of Minsk Automobile Plant, a state-owned enterprise that to this day is fighting for survival.

Second, corruption is not exactly viewed as a mortal sin by the Belarusian authorities. Given the low rates of official compensation of state bureaucrats, it may seem normal for officials to supplement their meagre incomes with unofficial bonuses. According to Lukashenka, even state ministers earn less than two thousand dollars in Belarus.

And yet, plenty of officials have became exorbitantly wealthy and do not hesitate to flaunt their wealth in expensive real estate properties and luxury goods. One example is Mikhail Miasnikovich, the head of the Upper Chamber of the Belarusian Parliament, whose watch reportedly cost $30,000.

Another example is former Minister of Justice Viktar Halavanau, who several months ago put his house, located in the elite Drazdy area of Minsk, on the market for $1.4 million. These are very large sums for Belarus where the average salary in Belarus has been several hundred US dollars for many years.

These cases show that the country's leaders live by the principle: “For my friends, everything. For my enemies, the law.”

But now the economic crisis in Belarus has become a vexing problem for many officials. As the state budget shrinks, there may be less room to siphon off funds.​ Perversely, the economic crisis may incentivise authorities to battle corruption in order to clean up the budget and keep the economy afloat.

Sooner or later, however, Lukashenka will free another group of corrupt officials, if only to fill government posts that no one else wants to fill. 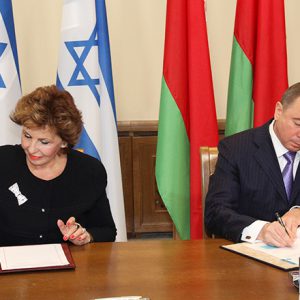 Israel’s decision to close down its embassy in Minsk and the immediate response in kind by the Belarusian government are likely to undermine recent positive trends in bilateral relations between the two countries.

Belarus has meanwhile sought to develop relations with other countries in the region, including Israel’s known foes, Iran and Morocco. Despite the recent withdrawal of Western sanctions against Iran, no major cooperation projects between Minsk and Tehran are on the bilateral agenda.

Belarus' foreign ministry is also seizing every opportunity to establish ties with remote countries, in some cases through getting observer status in obscure and exotic organisations as far away as the Caribbean.

Engaging in an embassy row with Israel

On 7 January, Belarus announced the forthcoming closure of its embassy in Tel Aviv. The Belarusian government will take this step in retaliation to Israel’s decision to close down its embassy in Minsk before the end of 2016.

The Israeli government took the decision to reduce the number of its foreign missions in August 2015, citing budgetary constraints. Initially, it planned to shut down eight or nine diplomatic representations.

However, the final list, which the Israeli foreign ministry made public on 7 January, included, in addition to the diplomatic mission in Minsk, only the embassy in San Salvador and the consulates in Philadelphia and Marseilles. 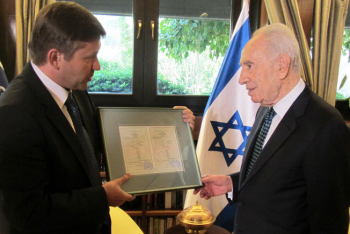 Dmitri Mironchik, the foreign ministry’s spokesman, recalled that “in 2003 [Belarus’] Israeli partners took a similarly wrong step and in less than a year realised the necessity of remedying the situation”. At that time, Belarus recalled its ambassador from Tel Aviv and suspended visa services to Israeli citizens but refrained from closing down its own embassy.

Belarus and Israel are connected through many historical and personal links. Over 130,000 people of Belarusian descent live in Israel. Belarus has an important Jewish community (30,000 people according to official statistics and 150,000 according to some Jewish activists). Several former Israeli leaders, including three presidents and three prime ministers, were born in Belarus.

The estimated cost of maintaining the Israeli embassy in Minsk is about 4m shekels ($1m). Visa fees helped to cover some expenses in the past. However, Belarus and Israel introduced a visa-free regime on 26 November 2015.

The reciprocal closure of the embassies may still be reversed. According to Israeli online portal Tali Ploskov, the vice-speaker of the Knesset has allegedly persuaded Moshe Kahlo, the finance minister, and her party colleague to procure sufficient funds to keep the embassy in Minsk open.

Belarusian ambassador to Israel Vladimir Skvortsov, who met with Tali Ploskov on 28 January, reportedly said that Belarus would not cancel a number of official visits and events if the problem is resolved. However, a senior Belarusian diplomat told Belarus Digest that despite these signals “the process of closure was still running its course”.

The Israeli government has sent a signal to the world that it does not regard Belarus as an important international player with an independent foreign policy. Belarus will hardly swallow this offence lightly.

Nevertheless, this potentially negative development in diplomatic ties between Belarus and Israel will be balanced by the inauguration of the Austrian embassy in Minsk on 9 February and the opening of the Belarusian embassy in Georgia later this year.

As the embassy row continues to undermine relations between Belarus and the Jewish State, Belarusian deputy foreign minister Valentin Rybakov has visited two of Israel’s foes in the region, Morocco and Iran. Interestingly, there are strained relations between the latter two countries.

The Belarusian diplomat came to Rabat on 27-28 January accompanied by a large business delegation which included manufacturers of trucks, tractors and quarry machinery.

Rybakov held the political consultations with his counterpart from the Moroccan foreign ministry. He also met the ministers for external trade and equipment and leaders of the local business community. Belarus and Morocco agreed to work on establishing a joint commission on trade and economic relations.

Belarus is also seeking to become involved in infrastructure development projects in this North African country.

Rybakov’s visit to Iran on 31 January-1 February had a much less saturated agenda. In Tehran, he talked to senior officials in the ministries of agriculture and industry and trade. 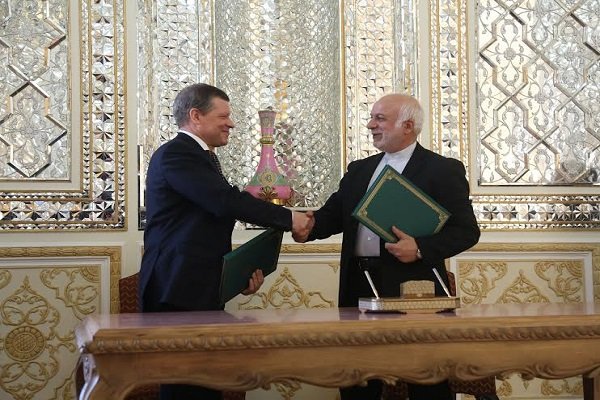 The Belarusian diplomat was scheduled to meet Iran’s foreign minister Mohammad Javad Zarif but the latter sent his first deputy instead. The signing of a memorandum of understanding on cooperation between the two countries’ foreign ministries in 2016-2018 became the visit’s main result.

The visits to the region confirmed the continuing trend in relations between Belarus and the MENA (Middle East North Africa) countries. Since the early 2010s, Belarus has shifted its focus away from the radical regimes of Iran, Syria and Libya to conservative pro-Western monarchies, such as Qatar, the United Arab Emirates (UAE) or Morocco.

Getting observer status in an exotic organisation

On 19 January, the 21st meeting of the Ministerial Council of the Association of Caribbean States (ACS), convened in Petionville, Haiti, accepted Belarus as an observer to the ACS.

Belarus’ foreign ministry claimed that observer status would “give Belarus an opportunity to intensify and expand trade and economic cooperation with member states of organisation with a total population of over 237m”. The ministry also anchors great hopes on Cuba’s presidency of the ACS this year.

In reality, the ACS is nothing but a loose regional forum for consultations. Founded in 1994, it has no track record of evaluating its efficiency, in particular, in trade matters, which are of interest to Belarus.

In 2015, Belarus received observer status in the Shanghai Cooperation Organisation (SCO) and the Conference on Interaction and Confidence-Building Measures in Asia. The foreign ministry hopes that observer status will help to “promote to the maximum degree interests of the country and Belarusian exporters in the states of the Far Arc of partnership”.

However, such a form of engagement with organisations from remote regions will hardly provide anything beyond symbolic PR benefits. Targeted bilateral efforts have much greater chances of succeeding.

In fact, the “far arc” of the developing world, whether it is the Caribbean, Middle East or Asia, is a feeble substitute for full-scale economic relations with the Western world.

Igar Gubarevich
Igar Gubarevich is a senior analyst of the Ostrogorski Centre in Minsk. For a number of years he has been working in various diplomatic positions at the Belarusian Foreign Ministry.
all articles » Follow @
Association of Caribbean States Austria belarusian embassies Cuba Diplomacy foreign trade Georgia Iran Israel morocco