Although many question whether Belarus is really an independent state today, its three independence days paint a different picture.

Depending on one's political views, Belarusians consider either 25 March, 3 July or 27 July as their real day for commemorating... 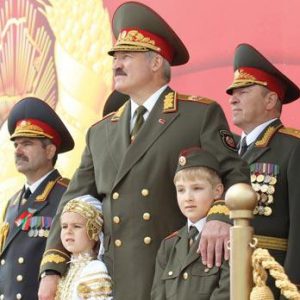 Although many question whether Belarus is really an independent state today, its three independence days paint a different picture.

Depending on one's political views, Belarusians consider either 25 March, 3 July or 27 July as their real day for commemorating their independence as a nation.

On 27 July, Belarusian civil society activists and journalists symbolically celebrated the third of these independence days – the 24th anniversary of the Declaration of Belarus' Sovereignty in 1990. Two decades ago it was essentially the main official holiday for the young nation.

This year the authorities organised a bloated, pompous celebration of the Belarus Independence Day on the 3rd of July. Hundreds of thousands of Belarusians came out to watch a military parade in Minsk for the capital's official Independence Day celebration for the duration of Lukashenka's reign.

The opposition, however, believes that the 25th of March is the nation's real independence day, as it was the day when the Belarusian Peoples Republic was founded in 1918.

The authorities only recognise and celebrate 3 July as the nation's official Independence Day, also known as the Day of the Republic.

Every year they commit substantial financial and human resources towards its preparations. This year they wanted to make it an especially notable commemoration as it would mark the 70th anniversary of Minsk's liberation from Hitler's Nazi forces.

This year Russian president Vladimir Putin came to Minsk right before Belarus' Independence Day to open with his Belarusian counterpart a new Museum of the Great Patriotic War.

This joint opening of the museum was meant to demonstrate the historical and political unity of both countries. Perhaps due to him having slightly different views about Belarusian independence on the eve of Belarus' Independence Day parade, Putin quietly made his way back to Moscow.

As the independent newspaper Naša Niva reported, around 200 thousand people gathered to watch the traditional military parade held on 3 July. Moving the time of the parade from its traditional morning schedule to the evening may help to explain the record turn out this year.

The parade proceeded through the city centre with military vehicles bearing not only Belarus' official red-green flags, but also Soviet and Russian flags.

Lukashenka typically avoids speaking Belarusian, and is known to ridicule those who do so, but on 1 July he surprised many by delivering part of his speech in Belarusian.

He spoke about the unity of the Belarusian nation and the universal consensus held among its people in support of its sovereignty. He also emphasised Belarus' independence and the historical links of Belarus with the Soviet Union, calling the victory over the Nazi forces "our victory".

Justifying the choice of making 3 July a national holiday, he said that Belarusians themselves had decided to “restore this historical connection” when they voted for this date as Independence Day in a nationwide referendum in 1996.

Prior to 1996, Belarus celebrated its independence on 27 July. After the dissolution of the Soviet Union, the Belarusian parliament passed its Declaration of Sovereignty on 27 July 1990. The 1995 referendum organised by Lukashenka was responsible for changing the timing of Independence Day.

In this referendum, one of the questions suggested moving Independence Day from 27 July to 3 July. According to officially reported results, nearly 90% of voters came out in favour of changing the date. The West, however, did not recognise the referendum’s results due to what they stated were multiple election violations and widespread vote rigging.

Since then, the state media and authorities have been silent about 27 July. For example, last year although Belarus' state Channel 1 journalists covered extensively the preparations and celebrations of the 1025th anniversary of the baptism of Kievan Rus, they did not say a word about the Declaration of Sovereignty. This year the anniversary also went unnoticed.

Some opposition-minded Belarusians try to commemorate the anniversary of the Declaration of Sovereignty of Belarus on their own.

Last year on 26 July 2013, just a day before the anniversary, the young activists from the movement "Alternativa" (Alternative) tried to wave the traditional Belarusian red-white-red flag on a bridge in the centre of Minsk.

The police, however, prevented them from doing so and eventually arrested them for their illegal unsanctioned political act. In the past the opposition has organised meetings, but few people attend them.

The Declaration of Sovereignty of Belarus clearly refers to the end of a particular epoch in history, one that remains uncomfortable for the current neo-Soviet political rhetoric, and hence their avoidance of the topic.

Belarusian opposition and many diaspora groups consider Freedom Day, which falls on 25th of March every year, as the most important day for commemorating the iedependence of the Belarusian state. This date marks the proclamation of the Belarusian Peoples Republic (Bielaruskaja Narodnaja Respublika or BNR) in 1918.

The BNR existed for only a few months, as the Communists subsequently crushed and destroyed it. Its leadership moved into exile. Ivonka Survilla has served as the President of the BNR’s Council since 1997, an organisation which primarily consists of Belarusian diaspora.

For supporters of recognising Independence Day on 25 March the proclamation of the BNR signifies the first properly independent example of Belarusian statehood.

According to an article recently published in the Journal of Belarusian Studies, many historians believe that without the BNR neither Soviet Belarus and nor contemporary Belarus would have ever seen the light of day.

Celebrations surrounding Freedom Day in Belarus take place primarily in opposition-focused centres and media, while the official channels of communication disregard it outright or distorts its image. This year, for example, Freedom Day coincided with the turbulent events unfolding in Ukraine and was used as fodder to dissuade people from making Belarus like Ukraine.

Opposition activists organised a rally throughout Minsk and brought not only white-red-white flags (unrecognised by the state), but also Ukrainian flags. In the 1990s public rallies on 25 March gathered tens of thousands of Belarusians, but now they draw considerably smaller numbers.

To discredit the opposition, state media accused those who celebrate the declaration of the BNR of being supporters of the Ukrainian banderovcy (the Ukrainian nationalists from WWII who fought against all sides in the war).

The government conveyed a very negative message: those who celebrate the 25 March Freedom Day are trying to launch their own "maidan" in Belarus, and these same people are the “successors of the Nazis".

According to a 2009 survey conducted by the Belarusian Institute of Strategic Studies and the Novak Laboratory, 57% of respondents considered 3 July as Belarus' primary national holiday. The 27 July and 25 March received only 1% of support of respondents of that survey.

As Aliaksandr Klaskouski on Naviny.by noted 25 March, celebrated by the opposition, remains foreign to many Belarusians. Most of them know little about its pre-war history.

By promoting the Soviet era and nearly ignoring the rest of Belarusian history, the country has become more vulnerable to an increasingly assertive Russia.

Hopefully the country's president speaking in his native language on the Independence day will become the first step in helping Belarusians reclaim their rich history and culture.

Ostrogorski Centre Launches 2014 Issue of the Journal of Belarusian Studies 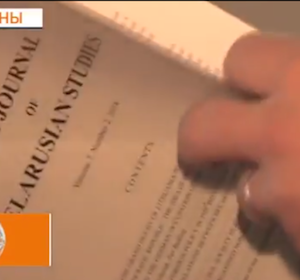 On 27 June the Ostrogorski Centre launched the latest issue of the Journal of Belarusian Studies during a gathering of the Belarus Research Council in Vilnius. Additionally, Ryhor Astapenia presented the Centre's Belarus Profile project to Belarusian researchers – an online directory of influential people in Belarus.

The Belarus Research Council (BRC) is an umbrella organisation that facilitates the development of independent analytical think tanks in Belarus. Established in 2012, BRC is a loose network of Belarusian think tanks, polling agencies and donors supporting social science research in Belarus.

The Ostrogrski Centre, formerly known as the Centre for Transition Studies, presented its first project under its new name. Named after a Belarus-born political science scholar and historian Moisei Ostrogorski (1854-1921), the Centre seeks to bring together Western-educated scholars and journalists living in Belarus and elsewhere in Europe.

In addition to Belarus Digest and the Journal of Belarusian Studies, the Centre's projects also include Belarus Profile, an online directory of influential people in Belarus and the CIS Arbitration Forum, a platform devoted to dispute resolution in former members of the Soviet Union.

The Belarusian independent TV channel Belsat called it one of the most promising analytical centres in its coverage of the meeting of the Belarus Research Council.

New Issue of the Journal of Belarusian Studies

The Journal of Belarusian Studies is the oldest peer-reviewed journal devoted exclusively to Belarusian studies. Since 1965 it has been published in London in English and Belarusian.

The 2014 issue of the Journal of Belarusian Studies features articles covering a range of topics – from the history of Belarusian statehood to relations between Belarus and Iran, and the activities of government-organised NGOs in Belarus.

Per Rudling of Lund University and Dorota Michaluk of Nicolas Copernicus University open the issue with a study of the development of the idea of a Belarusian state during the German occupation of Belarusian lands in 1915-1919.

They observe that the German administration regarded Belarusian nationalism as a useful political commodity which they supported as a counterweight to other regional nationalisms. They note how historical Lithuanian and Western Rus’ ideas of statehood dominated the minds of Belarusian intellectuals at the time.

Furthermore, they demonstrate that the establishment of the Soviet Belarusian Republic appears to have been directly tied to and dependent on the 25 March 1918 proclamation of the founding of the Belarusian Democratic Republic (BNR), without which it seems plausible to argue that the Bolshevik leadership would have simply adjoined Belarusian lands to Soviet Russia.

Siarhei Bohdan of the Freie Universität Berlin analyses relations between Belarus and Iran, ties which have undergone a series of quantitative and qualitative changes since their establishment in 1993. The rise of the United States as the world's sole super-power and its efforts to try isolate the Iranian regime has had an important impact on Belarus-Iran relations.

Belarus has managed to reach a number of deals with Iran despite the West's opposition thanks, in large part, to its alliance with Russia, who has defended and supported Belarusian foreign policy in many directions, including its move into the Middle East.

He concludes that the pattern of relations with Iran demonstrate the flexibility of the current Belarusian leadership, who are more interested in seeking out beneficial outcomes for itself rather than a regime trying to challenge the existing international order in any serious manner.

The article looks at the extent to which the activities of pro-democratic organisations are copied by government-backed entities as well as to what degree the substitution of authentic civil society with government-organised non-governmental organisations takes place in Belarus.

She concludes that under the conditions of a repressive and consolidated authoritarian regime, reinforced by a weak civil society, substitution leads to distorted perceptions of civil society and NGOs.

This issue also features a book review by Vitaut Kipel of Living with a Scent of Danger: Adventures at the Fall of Communism. Arnold McMillin reviews 100 Words About Contemporary Belarusian Literature, while Lizaveta Kasmach looks at Soviet Belarusiasation on the Path to Nationhood and Ryhor Astapenia reviews The History of the Great Duchy of Lithuania: Belarus’ Medieval Origins.

Jim Dingley, the former Chairman of the Anglo-Belarusian Society, gave his account of Belarusian events organised recently in London, including a conference which brought together scholars from Belarus, the United Kingdom, Poland and Lithuania.

Publication of this issue of the Journal of Belarusian Studies coincides with the arrival of Brian Bennett, the former UK Ambassador to Belarus, as the new Chairman of the Anglo-Belarusian Society.

As with the previous issue, articles from the Journal can be downloaded online or purchased as hard copies.

Pictures from the launch organised at the Belarus Research Council meeting are available at ostrogorski.org.