Belarusian Civil Society Is Turning into a Sport Society? – Digest of Analytics

In 2012 the majority of all NGOs registered in Belarus were sport-related. State-funded Belarusian Dumka discussed options for political modernization. Belarus is among top countries in EU visas refusal - fresh BISS study reveals.

According to a Belsat study, Belarusians are...

In 2012 the majority of all NGOs registered in Belarus were sport-related. State-funded Belarusian Dumka discussed options for political modernization. Belarus is among top countries in EU visas refusal – fresh BISS study reveals.

According to a Belsat study, Belarusians are increasingly willing to donate to historical monuments preservation. Analysts took also a closer look on the Minsk-Brussels relations. Some of the experts notice the Northern Dimension as an instrument for improvement of the relations with the West.

Belarusian Civil Society is Turning into a Sport Society  – Lawtrend analysed the non-governmental organisations registered in 2012. Of the 111 new NGOs 56 sports organisations were registered, while there was not a single NGO of gender, human rights orientation or promoting democratic reforms. Lawtrend sees this trend as the displacement of a real civil society.

"Shut up, woman! Your Day is March 8"– Tatiana Shchurko refers to the history of celebrating of International Women's Day and finds that the original meaning of the holiday is to fight against discrimination against women, against the social systems, institutions and practises that emphasise gender differences and produce inequality of rights and opportunities. In Belarus, the holiday is used to consolidate the subordinate position of women in the gender hierarchy, strengthen and emphasise gender differences. The expert concludes that that this "holiday" requires substantial changes.

Public Opinion and Hi-Tech Startups in ‘Europe’s Last Dictatorship’ – Grigory Ioffe summarises the comments regarding the recent polls' results and the IT data. In particular, the author reminds that Belarusians believe that the most important aspects of Belarus’s modernization are the development of new technologies and improvement of the infrastructure. In this sense, apparently the hi-tech sector is yet another area where “Europe’s last dictatorship” has been doing something right.

On Slutsk Belts, Palaces and Churches: How Much Belarusians Donate for Monuments? – the Warsaw-based TV channel Belsat studied an issue whether people are willing to pay money for the restoration of historical monuments. The study's results are quite optimistic: so, during a month Br 45 million (about $5,230) were collected for the restoration of the castle in Bykhov; about $120,000 were collected to return Slutsk belts.

Fairytales and Myths About Police – Belarus National Security Blog reacts to recent publications on the announced reform of the Interior Ministry and launches a series of publications to analyse myths, that have been created around Belarusian police. The first publication is dedicated to the discussion of Belarusian interior troops, and whether such militarised police units are used in democratic countries. The author concludes that there is no direct relationship between the type and number of law-enforcement agencies and the level of democracy in a state.

FIDH Comments for EBRD Country Strategy for Belarus – FIDH makes some recommendations on the European Bank for Reconstruction and Development (EBRD) draft revised strategy on Belarus. While the EBRD’s proposed strategy stresses the importance of human rights and democracy, FIDH fears that in the present context of severe and recurrent human rights violations the strategy’s failure to address the concrete means by which to secure rights realisation risks rendering such references ineffectual.

Modernization Etudes – editor in chief of a state-run magazine Belaruskaya Dumka, Vadim Gigin considers different ways of political modernization in Belarus. The author outlines the directions of changes: public administration, political parties, non-governmental organisations. The article also addresses the topic of raising the prestige of civil service and reforms of the administrative-territorial division of Belarus.

Belarus-EU: Reasons for Refusals of Entry to Belarusian Nationals at the External EU Border in 2006-2011 – Andrei Yeliseyeu, BISS, continues studying the visa's topic. This time the expert appeals to the analysis of the denials of entry into the EU to Belarusians in 2006-2011.  By the total number of refusals, Belarus is very high on the list, fifth only to Albania, Ukraine, Russia and Serbia. One of the conclusions is that No valid visa or residence permit and insufficient means of subsistence in relation to the period and form of stay account for about 80% of all refusals of entry to Belarusian nationals.

The EU has No One to Talk to in the Dialogue on Belarusian Modernization – Andrei Yahorau, the coordinator of the first working group of the European dialogue on modernization “Political dialogue and political reforms”, Director of the Centre for European transformation, shares the results of the recent meetings in Brussels. In particular, Yahorau notes that one of the main problems for the EU is that the Belarus' state isn’t ready for an adequate dialogue, as well as independent civil structures cannot step out with a common opinion.

Good Cop or Bad Cop? Sanctioning Belarus – Ondrej Ditrych, Briefs, raises the topic of sanctions which seem to have become one of the EU’s weapons of choice to effect change beyond its borders and the case of Belarus testifies in particular to the Union’s ambition to conduct coercive diplomacy. Yet, despite the various steps taken by the EU over the past years, little lasting success has been achieved so far in enforcing meaningful change in Europe’s ‘last dictatorship’.

Critical situation for political prisoners in Belarus and freedom for 40 activists considerably restricted – FIDH and Human Rights Center Viasna present an executive summary graphically demonstrating the systematic repression directed at individuals who are serving or have already served sentences for their political or human rights activities. This document was submitted to corresponding UN and OSCE agencies, and other international human rights protection mechanisms.

Klaskovsky: Elections 2015 May Not be the Victory for the Opposition – "but can raise a leader with whom the authorities have to conduct a dialogue ", – Alexander Klaskovsky believes. The political analyst answers the questions of Belarusian Partisan regarding a need for a single presidential candidate of the opposition and opposition's capacity to attract the "new majority".

Belarusians Had to Mourn Chavez for Three Days

Isolated from the West, the Belarusian ruler does not have much choice when it comes to finding foreign friends and partners.

According to the Belarusian state news agency BELTA, Chavez had closer friendly relations with Lukashenka than with any other foreign leader. The Belarusian authorities announced three days of mourning in the country. All TV and radio stations were recommended not to air entertainment programmes and state flags had to be flown at half-staff starting on 6 March.

That shocked many observers – when the greatest modern Belarusian writer Vasil Bykau died, the authorities announced no mourning at all. Just one day of mourning followed the Minsk metro bombing on 11 April 2011 that left 15 dead and hundreds wounded. Lukashenka is trying to demonstrate how highly he appreciated his personal relations with the Venezuelan leader, a stranger to most Belarusians.

Lukashenka likes to cooperate with other authoritarian leaders, although that brings little financial gain to Belarus. Anti-Americanism and “resistance to the single-polar world” rhetoric are the main uniting factors here. Such cooperation serves the purpose of support for one another in the international arena and secures internal legitimisation.

Lukashenka’s regime often uses connections like that to show its autonomy from Russia and independence from the West. Further, these relations remain important for the internal stability of the countries. Unofficial sources claim that the special services of Belarus, Iran and Venezuela cooperate with one another and share the experience of preventing the “coloured revolutions”.

The leaders of Belarus and Venezuela made friends in 2006, when Chavez visited  Minsk for the first time. Chavez suggested to Lukashenka that they form a “combat team”, and Lukashenka replied that they could create “a team in football, hockey or basketball”. That friendship looked very doubtful then, and the numbers confirmed it. In 2006, Belarusian exports to Venezuela totalled $6.0m, and imports zero.

Due to the personal friendship, the situation then changed drastically. In 2012, Belarusian exports to Venezuela totalled $254.4m, while Venezuelan exports totalled $326.4m. Moreover, in 2010 and 2011, imports from Venezuela surpassed one billion dollars. Unlike any other of Lukashenka’s partner, Chavez made Belarus a priority over Russia and irritated the Kremlin by selling oil to Belarus. Lukashenka promised to never to forget it.

Venezuela has become a great market for Belarusian goods.  Often their quality is so low that only a friend would buy them. The majority of Belarusian economic projects may have to be be cancelled after Chavez’s death. The new President is unlikely to sympathise with the Belarusian leader so much.

Whoever becomes the new Venezuelan president , he will never become as popular as Chavez. Moreover, he will have to solve several complex internal issues and is unlikely to spend money on Lukashenka instead of his country's other mates.

At first, Lukashenka did not plan to participate in his friend’s funeral personally. His close aide Victar Sheiman was supposed to go to Venezuela. However, the Belarusian leader decided to put off festive ceremonies dedicated to International Women’s Day (an official holiday in Belarus) and flew to Caracas. He probably did this not only because he wanted to say goodbye to his friend, but also to try to support Belarusian interests in Venezuela.

Other Authoritarian Friends of Lukashenka

The more negative Lukashenka's relations become with Vladimir Putin or the West, the more he tries to create the impression of friendly relations with other countries. Lukashenka always liked to demonstrate his good relations with Mahmoud Ahmadinejad, Moammar Gaddafi, Robert Mugabe, Slobodan Milošević and even Fidel Castro. 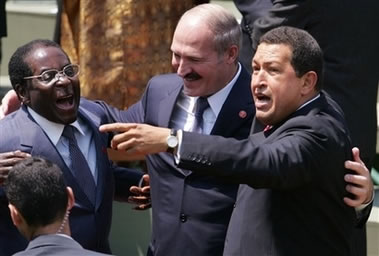 Relations with Iran looked the brightest. Close relations with Mahmoud Ahmadinejad secured access to the Iranian market for Belarus. Belarus is now actively selling not just traditional potassium fertilisers, but also agricultural equipment, synthetic fibre and metal products to Iran. Moreover, Belarus got an opportunity to develop an oil field in Juffair while Iranians opened their “Samand” automobile factory in Belarus.

In 2006, Ahmadinejad told Lukashenka that he considered him his best friend ever. However, several years later the Iranians broke the contract for oil production with Belarusians, while the quality of “Samands” appeared so low that the Belarusian authorities decided to close the factory.

Lukashenka also had close relations with Moammar Gaddafi. He even called him his brother in public. Like Chavez.

In 1999, Lukashenka visited Slobodan Milošević during the NATO operations against Yugoslavia, in order to support him and even to discuss Yugoslavia’s joining the Union State of Belarus and Russia.

Why Lukashenka Needs Such Friends

Lukashenka has been on the EU travel ban list for many years and cannot travel to most European countries or to North America. Therefore, the Belarusian authorities like to portray any minor international meeting or trip as a major international event. Lukashenka has no particular reason for hugging Mugabe, but he does it.

The second problem comes from the first one: the absence of recognition. The Belarusian regime makes a lot of fuss about its international relations in order to send a signal to Belarusian society that the international community recognises the Belarusian authorities and communicates with them.

Thirdly, the quality of some Belarusian products remains so low that other countries agree to buy them only on the basis of really friendly relations – they have to buy the goods in order not to destroy the friendship.

Nobody knows how real the friendship between the Belarusian and the Venezuelan leaders was, but Lukashenka will definitely miss Chavez. The Presidente indeed supported Lukashenka and asked for nothing in return.  Chavez, Gadaffi, Milošević  – those are friends whom Lukashenka will never see again.

Every year the Belarusian ruler leader keeps losing friends, and the list of his foes continues to grow.