Chinese Enclave in the Heart of Belarus?

650 thousand Chinese will be building an industrial park near Minsk and they have already obtained working visas.

Yaraslau Ramanchuk – an ex-candidate for Belarusian presidency – has received this information from his own sources of information. Gazeta.ru, major Russian online media, also mentioned... 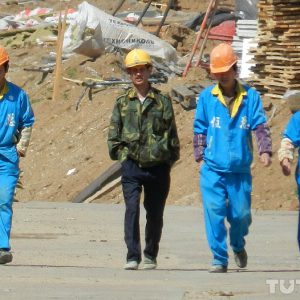 650 thousand Chinese will be building an industrial park near Minsk and they have already obtained working visas.

Yaraslau Ramanchuk – an ex-candidate for Belarusian presidency – has received this information from his own sources of information. Gazeta.ru, major Russian online media, also mentioned a similar figure which it obtained from government sources.

If the information is true, Belarus will soon have one Chinese for every 14 Belarusian and an a sizable Chinese town 50 kilometres from Minsk. Belarusian state officials deny this. However, recent Belarusian history has taught the Belarusian public to be sceptical of the government’s assurances. Moreover, the whole story about the Chinese-Belarusian Industrial Park rests under a veil of mystery.

Under the Edict, the Park is going to occupy 8,048 hectares of the Smaliavichy region (Minsk district) and host high-tech and export-oriented companies. Electronics, biomedicine, fine chemistry and engineering will be among the Park’s priorities.

The estimated cost of the Park’s construction is about $30bn. Apparently, a great portion of this money Belarus is expected to come from China. Recently, Vice Prime Minister Anatoly Tozik has claimed China is already on the point of allocating $3bn for the Park’s development.

The large financial assets’ coming from China to Belarus are not as rare as might be expected. By now, loans from the Chinese have enabled different state ministries to implement a couple of investment projects. China investments have flown into Belarusian power generation and clean energy. By 2014 in the centre of Minsk a new Chinese hotel complex “Beijing” is going to arise thanks to a Chinese investor.

But as a rule, money from the Celestial Empire arrives in the form of tied loans. Under such loan arrangements, Belarus does not only use the money for the purchase of Chinese equipment, but also as remuneration for Chinese workers. From a financial point of view, the situation with the Chinese-Belarus Industrial Park represents a new stage in relations between two countries.

Probably the most tempting perspective are the exemptions from profit, land and real estate taxes granted to all the Park’s residents for its first 10 years. In addition, the income tax of the Park’s employees is going to be a quarter less than for other Belarusians.

Goods produced by Chinese companies in Belarus will benefit from the same special treatment in Russia and Kazakhstan as usual Belarusian goods. For example, a major Chinese automaker Geely has already become the Park’s resident.

Production of competitive automobiles in Belarus seems to disappoint its larger neighbour. Already, in June 2012 the Russian Ambassador to Belarus Alexander Surikov said that Belarus’ intent to start production of Chinese automobiles can become “a matter of serious discussions”. “We do not want to destroy our Russian automobile industry. And that is the whole issue”, – said Surikov.

Russia’s claims against automobiles’ construction have no legal foundation. Alexander Surikov admits: “Of course, we cannot forbid Belarus from assembling someone else's automobiles, but we note that some questions will arise […]”.

Unfortunately, Belarus still depends on Russia’s favourable disposition, primarily expressed in the form of subsidised energy resources. That makes Belarusian authorities look for compromises. According to some Belarusian media, the state is now making concessions to Russia within the negotiations on merger of Belarusian MAZ and Russian KAMAZ, two post-Soviet giant automobile plants. While the merger’s question has been on the allies’ agenda since 2010, this November they deadlocked again.

Still, in case of Chinese motor industry’s success in Belarus, such concessions may not suffice.

Even more, Russia can succeed in attacking the Park’s privileges from a legal point of view. The tax privileges Belarus provides to the Park’s residents may qualify as state subsidies. At the same time some international commitments of Belarus, such as the Common Economic Space’s Agreement on Unified Rules on Providing Industrial Subsidies, limit the possibilities of such state subsidies’ use. Consulting the Common Economic Space’s Commission on the permissibility of such measures in advance seems to be the only reasonable step Belarus can take now.

The new project has lead to inner turmoil as well. The first wave of dissatisfaction came already in January 2011. Inhabitants and summer residents of the future Park’s territory protested against the construction.

At first, the reason was the fear of demolition of people’s houses.

The fear grew into a mass movement. The citizens protested not only against the need to leave the settlements, but against the whole building of the Chinese–Belarusian Park. In their opinion, it will also threaten the region's ecology. One of Belarusian opposition political groups, "Tell the Truth" campaign, managed to attract the public’s attention to the problem.

Belarusian officials, including Vice Prime Minister Anatoly Tozik and the Head of Minsk District Executive Committee Boris Batura, had to make numerous assurances.  However, the campaign failed to implement its more ambitious goal: to hold a local referendum on whether the Park should appear. Probably, the possible result of the referendum was too obvious and undesirable for the state.

The people’s strong dissatisfaction spread even far beyond the Smaliavichy region after Yaraslau Ramanchuk announced that 650,000 of Chinese are going to immigrate to Belarus for working in the Park. Russian Internet resource Gazeta.ru mentioned 600,000 Chinese. However hospitable Belarusians may be, such a change in the country’s ethnical situation seems quite shocking. The total population of Belarus is less than 9.5 million people.

The state authorities have denied the news. According to Tozik, 600,000 people is the approximate total number of employees of the Park (including Belarusians). Time will show whether the giant Industrial Park with hundreds of thousands Chinese workers will become a fact or a myth. In the past, Belarus has negotiated many large-scale investment projects, most of which failed to materialise.

Living with Stigma and Ignorance: HIV on the Rise in Belarus 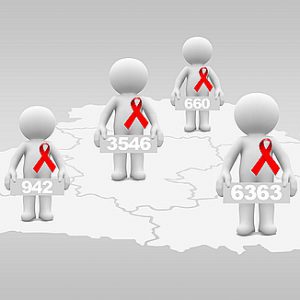 At the end of the last year, the Healthcare Ministry of Belarus in partnership with the UNDP started a campaign to challenge HIV/AIDS-related stereotypes and myths.  An exhibition “Life with HIV is life” has been travelling to various Belarusian educational institutions to show that people can continue to live a full exciting life even after being diagnosed with HIV.

The campaign aims to debunk the preconceptions that AIDS means death, and HIV means AIDS. Other goals are to educate people about the mechanisms of HIV transmission and to fight against the isolation of all HIV-infected people. Similar campaigns have been found very effective in the United States and Western Europe, and Belarus is finally following their practise.

Even so, the HIV infection rates are on the rise, even as they are falling globally. Every month 100 Belarusians are diagnosed with HIV. The number of women among them continues to grow. Together with other post-Soviet states, Belarus is home to the world’s fastest-growing HIV epidemic, with a 250 percent growth rate since 2001.

The campaign is long overdue, as Belarusians with HIV/AIDS have been victims of stigma and ignorance for nearly two decades. In Belarus losing a job because of the diagnosis is common but never investigated by the authorities. Even the healthcare professionals are sometimes ignorant about the disease.

According to the Stigma Index Survey, 40.5% of HIV-infected respondents experienced confidentiality breach by the medical personnel and 15.5% were refused medical care. Besides inflicting additional psychological and material harm on the HIV- infected, the stigma and discrimination continue to undermine response to the spread of HIV.

Stigmatisation discourages people from turning to doctors and counsellors and forces them to hide their diagnosis, which increases the likelihood of transmission.

The campaign is an important step forward. However, the Belarusian campaign against stereotypes and myths does not do enough. In particular, the approach is lacking in gender-sensitive strategies. Women and girls face the greatest challenges as they are biologically more vulnerable to HIV and as the Belarusian society is still guided by double standards regarding the sexuality of men and women.

The stigma partly stems from the assumption that most HIV-infected people are injecting drug users. This, in fact, is no longer true in Belarus where around 2004 sexual intercourse has overtaken drug use as the prevalent method of HIV transmission. In 2011, 76,1% of the new HIV infections were sexually transmitted.

Injecting drug users were about 80% male, whereas sexual transmission is just as likely to occur to women. As a result, HIV increasingly affects women. If in the past women comprised 39.2% of all HIV-positive people; in 2010 and 2011 women accounted for 47-48% of new infections, according to Positive Movement, a partner of UNAIDS in Belarus.

In fact, women in Belarus are particularly vulnerable to sexual transmission of HIV because of duress and violence regarding the use of contraception and reproductive health. According to sociological studies, 4 out of 5 Belarusian women experience psychological or physical violence.

In 2011, HIV-infected mothers gave birth to 1980 children; 198 children were confirmed to be HIV-positive. The area of vertical (mother-to-child) HIV transmission is where the highest progress was achieved in Belarus and the post-Soviet states.

This number could be even lower, as drugs are available to minimise the dangers of infection. However, Belarusian health care professionals lack clinical protocols or specialised knowledge on the prevention of HIV transmission from pregnant mothers to children.

According Positive Movement, HIV-infected women face particularly acute prejudice and humiliation due to the absence of gender-sensitive approach in treatment of HIV-infective patients. In the programmes on reproductive and sexual health, no special treatment is reserved for female drug users, which is probably why women drug users are less likely than men to resort to programmes of HIV-prevention.

Women drug-users who have children are also affected by the implementation of Decree No. 18 “On the additional measures of state protection of children in problem families”. The decree imposes nearly impossible conditions on the women who hope to retain custody of their children and at the same time provides no help in fulfilling these conditions.

Developing a humane approach to fighting the disease

It is important to acknowledge some progress in addressing the problem. In August 2012 HIV-positive people in several cities were able to get free condoms, and since 2009 HIV testing can be conducted anonymously. Furthermore, а campaign to rebrand HIV and AIDS and disband some popular stereotypes about the disease is underway. I

n 2008 the Ministry of Education with UNESCO involvement adopted a concept for HIV prevention in educational institutions and reported an increase in the percentage of schools providing HIV prevention education from 80% to 86%. In comparison to Ukraine and Russia, the prevalence of the HIV epidemic in the general population is low in Belarus.

However, a lot more remains to be done. First of all, it is important to design laws that will prevent stigmatisation of the HIV-infected people and encourage injection drug users, a risk category for HIV infection, to undergo treatment and rehabilitation.

Second, a gender-sensitive approach to injection drug users and HIV-infected women is long overdue. HIV-infected women are particularly vulnerable to discrimination and stigmatisation, including due to the implementation of Decree No. 18.

Third, education and training of the police, state officials, and health personnel is crucial to address the stigma and encourage people to seek treatment Doctors need to be educated about the transmission of AIDS from mothers to children and prepared for addressing the needs of pregnant women drug-users.

All of these goals can be easily accomplished, if the government recognises the problem and musters the will to resolve it.