The 10th project on the Belarusian crowdfunding platform Talakosht has completed successfully - a book on facilitating activity in Wikipedia Wіkі-manual. Manage knowledge! has... 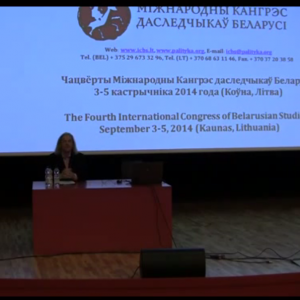 The 10th project on the Belarusian crowdfunding platform Talakosht has completed successfully – a book on facilitating activity in Wikipedia Wіkі-manual. Manage knowledge! has collected 4.3 million rubles.

The Belarusian authorities want to know the opinion of the business. Thus Information and Analytical Center at the Presidential Administration is conducting an online survey of entrepreneurs.

Fifth International Congress of Belarusian Studies kicks off in Kaunas. More than 450 scientists involved in studying Belarus people attend the biggest academic and expert event of the year. The Congress provides a platform for polemics on the entire spectrum of social and political sciences and in the humanities. The event takes place in the Vytautas Magnus University on 2-4 October in Kaunas. The Congress is traditionally conducted by the Institute for Political Studies Political Sphere.

Leadership in Local Communities calls for fellows. About 30 community activists will be selected to take part in the long-term leadership course on mobilizing citizens for addressing community issues and needs. This is the 8th Leadership Fellows Program implemented by Pact for Belarusian civil society activists; for two recent years it is organised jointly with the Office for European Expertise and Communications (OEEC). The deadline for applications is 12 October.

Registration for KEF opened. On 3-4 November Kastryčnicky Ekanamičny Forum, KEF titled as Economy of Belarus: At a Tipping Point will take place in Minsk. The registration and subscription for KEF updates are available. The overall objective of KEF-2105 is contribute to building consensus and trust towards a structural reform agenda, bringing the professionals together for an open discussion of the reform plans of the government of Belarus in the context of global trends and local challenges.

International Conference Deinstitutionalization: Global Experience and Way for Belarus was held in Minsk. The conference brought together leading experts from different countries. Deinstitutionalization approach is supported by Office for the Rights of Persons with Disabilities and aimed at changing the forms of social support of the disabled. The initiative includes the promotion of qualitative research of the situation in Belarus, educational thematic seminars and pilot transition to independent living.

Sixth Golden Age University (GAU) kicks off in Grodno. On October 1, GAU conducted an opening ceremony of its 6th academic year. The program offers persons aged 55 to 85 a skills-, values-, and action-based civic education curriculum, and engages in advocacy and policy work towards better conditions for elderly population of Belarus to contribute to the country’s development as full-fledged citizens.

Belarusian Collegium calls for 2015-2016 academic year. The Belarusian Collegium (BC) provides additional education on contemporary history, philosophy/ literature, the European Union and journalism. Senior students and persons with higher education are invited to participate. BC is an initiative of a number of independent Belarusian institutions and private individuals; it started its activities since 1998. Education in BC is for free.

10th success at Talakosht. One more project on the Belarusian crowdfunding platform Talakosht has completed successfully – a book on facilitating activity in Wikipedia Wіkі-manual. Manage knowledge! has collected 4.3 million rubles (about $240). Developed by the youth CSO Falanster Wіkі-manual is the 10th successful project that raised funds through the platform Talakosht, launched last year.

People’s voting for the projects participating in the 6th competition of social projects Social Weekend launched on 24 September. Internet users should choose the best 20 ideas out of more than 150. The organizers and the jury will select another 20 projects. The finalists will receive more than 350 million rubles (about $20,000) for the implementation of their projects.

President's Decree on signing UN Disability Rights Convention. The Office for the Rights of Persons with Disabilities welcomes the Decree and believes that the signing of the Convention by Belarus may have unprecedented consequences for the progressivity of the Belarusian society. For several years the Office conducted a campaign calling on the authorities to sign the Convention.

Government wants to know the opinion of entrepreneurs. Information and Analytical Center at the Presidential Administration is conducting a survey of entrepreneurs concerning the decree №666 "On introduction of the state sanitary-hygienic examination on imported goods", which has drawn criticism of independent experts. The survey is anonymous and held in the online format. 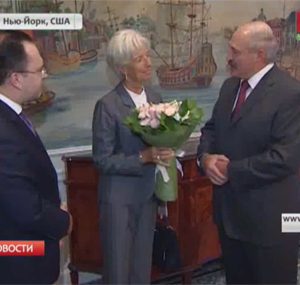 Lukashenka meets the Head of the IMF in New York

The authorities have promised further liberalisation of the economy in the near future. For now the authorities are tightening the rules and raising taxes. But a relatively low inflation rates gives hope to the possibility of macroeconomic stabilization and future cooperation with the IMF.

After a dramatic fall in July Belarusian GDP “recovered” in August where it slowed to a decline of -3.5 per cent. The decline of agriculture decreased to only -1.4 per cent in August, which helped to revive GDP. The rest of the economic sectors, however, have not shown any positive signs.

The only sector with a positive rate of growth is still the retail trade, but the future of this sector is murky, as real incomes continue to plunge, and the average wage in August was only $427.

The improvement in the financial state of enterprises represents a significant piece of good news. Outstanding debts to foreign companies declined in July for the first time in 2015. The same is true for received external loans. But this improvement in the accounts may stem from the devaluation of the Russian rouble only, and so not reflect any real improvements.

In September Alexander Lukashenka once again demanded that the level of foreign firm debt be decreased. Usually these debts arise when our exporters deliver the goods with deferred payments, underlining the importance of this problem for many state enterprises.

At the end of September, the government pre-announced once again the new changes to Directive No.4 liberalising regulations for private entrepreneurship. The promises includes equal opportunities for all types of enterprise ownership; stricter legal rules for the cessation of property rights; and a three-year moratorium on the negative changes to tax legislation.

But before the moratorium, the authorities have decided to have one last increase in taxes. Given the difficulties in tax collection, the tax authorities are looking to close all tax loopholes. The proposed changes to the Tax code increase personal income tax from the standard 13 to 16 per cent for those that can legally be caught evading taxes. There is also the introduction of a new tax on gambling winnings and a substantial increase in taxes on artisans.

At the same time the government introduced stricter importing rules. According to the hellishly numbered Resolution No. 666, almost all imported consumer goods have to go through the sanitary controls. This is true for each entire batch and not for only one specimen. As often happens with legislation in Belarus, the Resolution did not clearly define the rules and is still subject to change. But it will clearly have negative effects on importers and will raise the price of imported goods.

In August-September 2015 the Belarusian rouble suffered another blow, depreciating from 15,248 roubles per dollar on the 1st of August to 17,691 on September 30. The decline in the oil prices caused the depreciation of the Russian rouble, which eventually passed through to the Belarusian rouble. No wonder that the National bank struggles to revive the trust in the rouble.

However, despite another round of depreciation, inflation remains in single digits. In August 2015 prices increased 7.8 per cent compared to December 2014. This figure represents a big win for the National Bank. In the previous years half of the currency depreciation transferred into price growth.

Given the multiple currency depreciation episodes in 2015, we could expect inflation of at least 25%. But the new policies of the National bank managed to destroy the link between depreciation and inflation. The inflation rates in 2015 are so far lower than in 2014, when the exchange rate was stable (see Figure 1). 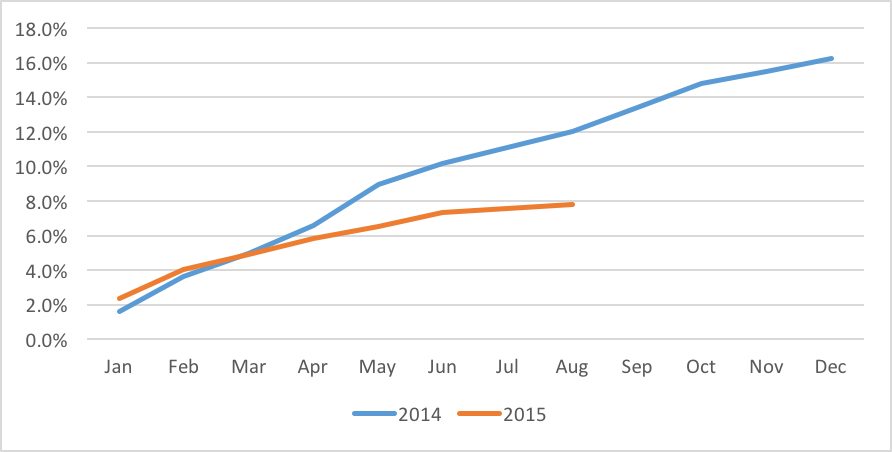 Recently the vice chairman of the National Bank Taras Nadolny confirmed that the National Bank is not going to decrease the refinancing rate this year. On the one hand this decision makes the inflation forecast of 16 per cent by the end of the year realistic. On the other, the real rate of interest in this situation would be too high to make any kind of investment affordable.

The first steps towards macroeconomic stabilisation in Belarus inspire hope for the future cooperation with IMF. On 26 September 2015 the head of IMF Christine Lagarde met with Alexander Lukashenka, presumably to discuss the possibility of a new $3.5bn loan.

Of course, the IMF loan will come with strings attached. Belarus will have to finally reform its economy. The main steps are macroeconomic stabilisation (through the decline in direct lending and money printing), the cancellation of universal utility subsidies and the introduction of proper unemployment insurance and other forms of social support for the labour market.

If the Belarusian government and IMF agree on the terms, after the election the economy will go through some painful reforms, which are, however, necessary for future development.