The post-Soviet integration and cooperation initiatives have an extremely unsuccessful track record. It seems that the problems persist. Recently, the very idea of Customs Union between Belarus, Russian Federation and Kazakhstan had been questioned, after the government of Belarus... 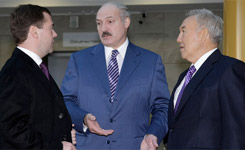 The post-Soviet integration and cooperation initiatives have an extremely unsuccessful track record. It seems that the problems persist. Recently, the very idea of Customs Union between Belarus, Russian Federation and Kazakhstan had been questioned, after the government of Belarus made clear its intent to insist on more tariffs exemptions, especially concerning Russian raw oil exported to Belarus.

These exemptions are vital for the Belarusian economy which in 1990s and 2000s immensely profited on refining imported oil selling the end products to Western Europe. By importing cheap Russian oil Belarus kept its refineries in Navapolack and Mazyr busy and very profitable. It also worked well for Russia which lacks refineries and other processing facilities.

But recently Moscow decided to stop this enrichment of Belarus and while insisting on 'customs union', excluded oil and oil products from its coverage. Belarus is expected to pay full tariffs. Yet cheap oil was that only benefit which made the idea of customs union with Russia and Kazakhstan, known as the world's major oil- and gas exporters, interesting for industrially developed Belarus.

'Customs Union' in its present shape, including two identically raw materials-based economies oriented at selling energy resources and buying consumer goods, does make sense. But only for these two economies, however. In essence it is merely a protectionist agreement.

Siarhiej Chaly is sure, Belarus has no interest in entering such association. The Belarusian officials, including deputy prime minister Siamashka now express the same opinion ever more explicitly.

Is Moscow facing one more failure in its attempts to collect its 'lost lands'? If Minsk will not comply with Russian wishes on the Customs Union it means a setback for ambitions harbored by a significant part of Russian elites, including Russian prime-minister Putin. Of course, the Kremlin can continue the whole enterprise with sole Kazakhstan. Yet, in this case Moscow shall wait until 2012 as agreed with Kazakhstan president Nazarbayev. More cooperative Lukashenka could be a symbolic geopolitical victory for the Russian leadership which is important to Russian public opinion eager to see restoration of 'national greatness'. Some observers speculate that such integration project could quite intentionally serve to show the wider audience in Russia an illusion of Soviet Union revival for the next presidential campaign of Vladimir Putin.
Meanwhile, there are two other conclusions to be drawn from the Customs Union. First, the integration of Belarus and Russia and their so-called 'Union State' has been endlessly discussed and propagated in public and media, but it remains only a spin matter, since the countries did not even reach the level of customs union. Moreover, conditions of oil shipments to Belarus proposed by Russia this time are worse than those for China.

Second, the whole set of post-Soviet integration initiatives so far have pitifully failed, and it is true both for projects with Russian involvement and without it. The reason seems to be common and basic lack of trust in relations between post-Soviet nations. Without confidence in their partners, former Soviet republics see all integration enterprises as either formalist nonsense or a way to promote other ends which run contrary to integration.

The only examples of successful integration embracing post-Soviet countries are the EU and NATO. Even Baltic countries did not manage to get along well enough to abolish borders or create common currency between themselves until they joined European Union. 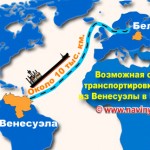 This year Europe will purchase its first oil products from Venezuelan crude refined in Belarusian Mozyr. While Belarusian citizens have a hard time obtaining visas and traveling, Belarusian oil products traverse borders freely and are welcome in the EU regardless of the state of Belarus’ civil society or its human rights situation. The Belarus-Venezuela project, whatever its economic feasibility, may help Minsk get on better terms with its immediate neighbors (perhaps with the exception of Russia) and decrease its reliance on Moscow.

In fact, precisely because the route for delivering Venezuelan oil is so long and tortuous, Belarus is forced to cooperate with Ukraine, Lithuania, Latvia, and other countries on delivering it. The first 80,000-ton "trial" crude was shipped via Ukraine's Odessa port and then by the rail to the Mozyr refinery. Other transporting possibilities include utilizing Ukraine's Odessa-Brody pipeline or Lithuanian (Klaipeda), Latvian (Ventspils) or Polish (Gdansk) ports.

While the logistical and financial aspects of the project are being criticized – especially in the Russian press, – and its profitability and efficiency indeed warrant caution, the project may bring Belarus closer to its neighbors that already offer assistance. For example, Lithuanian Prime Minister said that the project of transiting Venezuelan oil through Lithuania was “doable” and that Vilnius could even offer Minsk a discounted tariff rate. Similarly, Ukrainian Prime Minister said that the Venezualan oil project could lead to the “mutually beneficial agreements” between Minsk and Kiev and that Ukraine could provide Minsk with transportation discounts.

The first oil was produced by the JV Petrolera, and another JV will be set up to supervise the sales, with Minsk having a 25 percent stake in the venture. Alyaksandr Lukashenka and Hugo Chavez plan to invest at least $8 billion into developing the oil fields by 2025 and are also considering cooperating in the gas industry

With the terms of Russian oil deliveries to Belarus changing this year, importing oil from outside Russia becomes more economically feasible despite the distance. Moreover, oil tanker shipments cover vast distances on a daily basis, and states like China, India and Japan all buy Venezuelan oil.

Venezuela's heavy oil of the so-called Santa Barbara blend can produce 20 percent more gasoline, kerosene, or diesel fuel than Russian blends and is in high demand in the EU. Because this type of oil requires rather specific processing technologies, Belarus’ expertise and its products will be welcome in the European markets.

Belarus could import up to 4 million tons of Venezuelan crude, one fifth of what it imports from Russia, diversifying and securing its energy supplies. Minsk is also cooperating with Iran and looking into obtaining oil from Kazakhstan and Azerbaijan.