A few days earlier, several sources had reported that the president’s aide on economic issues – Dr. Kiryl Rudy – was to become the... 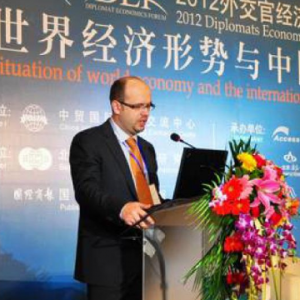 A few days earlier, several sources had reported that the president’s aide on economic issues – Dr. Kiryl Rudy – was to become the Belarusian ambassador in Beijing.

This information became fodder for significant speculation concerning Belarus's economic policy in the future. Many experts considered Kiryl Rudy to be a supporter of semi-liberal (or any) economic reform in Belarus. Such expectations were generally based on Kiryl Rudy’s biography, as well as his bold statements and publications regarding the current economic situation in Belarus.

Thanks to his earlier post as an economic counsellor at the Belarusian embassy in Beijing and as deputy General Director at Bel Huavyei Technologies (a China-Belarus joint company), Kiryl Rudy is well acquainted with the peculiarities of working in China. Moreover, some experts believe that he remains one of the main lobbyists for China’s interest in Belarus even after his appointment with the Presidential Administration. There are also rumours that he maintains business interests in China and in joint Chinese-Belarusian projects.

A new boost for relations with China?

During his appointment speech, Alexander​ Lukashenka criticised the work of previous ambassadors to China for their implementation of joint projects. Numerous researches have expressed significant doubts concerning the benefits of existing projects for the development of the Belarusian economy. The China-Belarus Industrial Park “Great Stone” is the most significant example.

In his comprehensive research, Stanislav Ivashkevich argues that Great Stone has failed to attract real manufacturing, build reliable infrastructure, or secure financing besides tied loans from China and subsidies from the Belarusian budget. Moreover, Great Stone risks becoming a competitor for the Belarusian logistics business. Kiryl Rudy has been very involved with this initiative among other examples of dubious cooperation with China.

In the Belarusian public administration system, officials do not perceive ambassadorships as particularly prestigious compared with positions in the highest echelons of power, especially in the Presidential Administration. However, when it comes to appointments in major foreign partner countries, including China, the situation may be different.

For former ambassadors Anatoly Kharlap (2004-2006) and presumably Pavel Burya (2011-2016), this office signalled the end of their public administration career. However, for Vladymir Rusakevich (2000-2003) and Anatoly Tozik (2006-2010), ambassadorship in Beijing became a platform for further promotion: to the positions of Minister of Information and Deputy Prime-Minister respectively.

Kiryl Rudy belongs to the younger generation of Belarusian officials and still has ample opportunities to further his career. One can hardly call this appointment a form of disgrace or a sign of the president’s displeasure with Rudy’s statements or positions. Moreover, Alexander​ Lukashenka tends to react immediately to failures of his closest subordinates and would not have tolerated Rudy’s ‘liberal’ ideas for any amount of time without solid reasons.

Pseudo-liberalism and a throwback to the year 2011

Almost all experts believe that Rudy’s appointment in June 2013 was intended to demonstrate the president’s ability and willingness to reform the failed Belarusian model of development. Kiryl Rudy was an outspoken advocate of reducing budget allocations and achieving a more balanced monetary policy, supporting private property rights, and general liberalisation of the Belarusian economy.

However, his appointment means that he is unlikely to be able to implement these ideas. It is also difficult to ascertain to what extent they influenced Alexander​ Lukashenka. Moreover, some experts believe that despite any economic crisis, regardless of its gravity, the president rejects even the idea of significant reforms in Belarus.

The confrontation between ‘liberals’ and ‘conservatives’ in the Belarusian public administration predates Kiryl Rudy – occurring in 2011 during the first serious economic crisis after the ten ‘rich’ years. The ‘conflict’ started between then Deputy Prime-Minister Siarhey Rumas and the president’s aide on economic issues Siarhey Tkachou.

In spite of Lukashenka’s public support of the ‘conservative’ faction, he replaced Siarhey Tkachou with Piotr Prokopovich and eventually with Kiryl Rudy. However, Rumas did not fall from grace, becoming the Head of the Belarusian Development Bank.

It seems that this ‘confrontation’ was of a largely artificial character. The Presidential Administration initiated this ‘conflict’ in order to prepare the ground for a number of unpopular measures, most importantly a reduction in social transfers. It is possible that this is the only form of 'reform' that Alexander​ Lukashenka is willing to accept.

Appeal to the IMF

However, in 2013 new negotiations with the International Monetary Fund complicated the situation. Following its Stand-By program in 2009-2010, the IMF started Post-Program Monitoring Discussions. The Fund demanded structural reforms and actual deconstruction of the Belarusian economic model. The discussions became particularly strained in 2013, when Belarus failed to complete almost all of its obligations on reforming the economy.

It seems that Rudy’s appointment as a presidential aide was meant to demonstrate the authorities’, and in particular Lukashenka’s, personal willingness to conduct at least limited economic reforms according to the IMF’s recommendations. However, during the years 2015-2016 the authorities became strongly disappointed with the IMF and in its readiness to start a new program with Belarus.

Besides vague economic perspectives, such disappointment also threatens the light liberalisation process in the country; it suggests that parliamentary elections will be organised in the traditional way with no opposition representatives elected.

China’s loans an alternative to reform?

However, the personality of Kiryl Rudy has little to do with this. He has ceased to be a source of hope for foreign agents promoting the idea of market reforms in Belarus. Meanwhile, in June 2016 China agreed to allocate a $1.4 bln loan to Belarus. In spite of the presumably very unfavourable conditions of this loan, it looks like a better option than endless and fruitless negotiations with the IMF.

At the moment, the skills and abilities of Kiryl Rudy seem more needed in China than in the Administration of the President. However, the very fact of this personnel rotation may be a signal of renewed de-liberalization of Belarusian policy.

This does not mean that Belarus will stop attempting to secure financial support from the West, including from the IMF, but changes in economic policy or in parliamentary election processes remain unlikely.

Aliaksandr is Dean of the Faculty of Extended Education at the Belarusian State University of Culture and Arts, and expert of NGO "The Liberal Club". 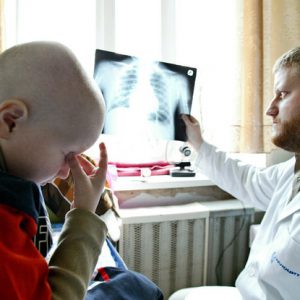 In mid-June 2016 Belarus hosted a regional forum on oncology for the second time since 2004. It brought together leading regional cancer specialists from 25 countries.

According to the World Health Organisation (WHO) 14 million people annually get diagnosed with cancer. In Belarus this number reached 50,000 new patients in 2015. Belarus has achieved considerable progress in cancer screenings and diagnoses at the regional level.

However, it consistently falls behind in cancer morbidity rates when compared to Western Europe, including immediate neighbours like Lithuania, and Latvia.

Currently more than 270,000 Belarusians have registered as oncological patients. In addition to the usual risk factors associated with cancer, such as ageing, smoking, and diet, Belarusians have now been living for 30 years with the radiation fall out from the Chernobyl disaster. This accounts for the saddest peak in cancer data – thyroid gland cancer increased disproportionately among children living in the affected areas.

The number of people diagnosed with cancer in Belarus has doubled since 1990: from 26,000 cases to 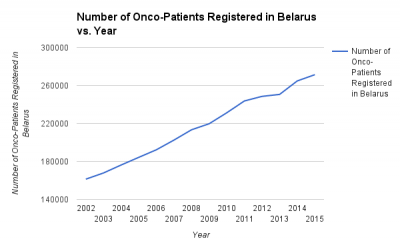 50,000 in 2016 according to the Chief Oncologist of Belarus, Aleh Sukonko. This number will continue to rise and reach 70,000 people by 2020. And the overall number of cancer patients diagnosed and registered with the healthcare system has steadily increased from 2002 and reached 271, 000 in 2015.

16% of patients go to see a doctor when the disease has already advanced to stage four, that is most advanced stage, at which cancer is almost always terminal, says Dr. Sukonko. Only 5% among them will recover.

To put it into perspective, according to Dr. Sukonko the morbidity rate in Belarus for cervix cancer is as high as 36%, compared with 21% in Germany. Screenings could help maximise early detection of the disease, and bring the morbidity rates down. Cancer screening involves testing apparently healthy people of a certain age, typically 50-70 years old.

Belarus has introduced regular cancer screenings aimed at prevention and early detection, but progress has stalled. Cervix cancer screenings among women are an example. Annual screenings are recommended for all women during their regular doctor's visit.Yet the ratio of stage four cancer cases diagnosed during such screenings remains stable at 10% among Belarusian women. In neighbouring Poland, where similar screening procedures are in place, the ratio is less than 4%, according to naviny.by.

What causes cancer in Belarus?

The most common risk factors for cancer include ageing, smoking, sun and/or radiation exposure, alcohol, poor diet, lack of physical activity, and being overweight. In Belarus quite a few of these factors come into play, such as radiation exposure after Chernobyl, overall population ageing, and poor self care with widespread smoking and high alcohol consumption.

Smoking is the leading cause of cancer in Belarus, with around 30% of all cases attributed to it, according

to the chief oncologist Dr. Sukonko. Poor diet is the next most common cause, with 25% of cancer cases. The numbers are expected to increase because of the longer life expectancy among Belarusians.

Thyroid cancer is usually rare among children, with less than one new case per million diagnosed each year. However, after the Chernobyl accident a striking increase in the disease was reported in children and teenagers in the most contaminated areas of Belarus and Ukraine. Scientists have estimated up to 5,000 cases of thyroid cancer among residents who were children at the time of the accident, according to the WHO.

Gender plays a role too. Belarusian men most often suffer from prostate (17% of all cases) and lung (15%) cancer. Women face diagnoses of breast (18%) and cervix (10%) cancer. And 10% of all cases among both men and women turn out to be colorectal cancer. Most of these forms of cancer are curable if diagnosed at stages one or two.

How people deal with it

Cancer takes it toll: every seventh Belarusian dies from cancer. It is the second most common cause of death in Belarus after heart disease. The government, recognising the cost to human life as well as the problems of population decline, has pledged to invest in combating cancer. According to Belstat, around 30% of the healthcare budget will go to fight cancer.

While this may mean potential improvement to the national cancer statistics, large gaps in patient care remain. Below is the account of a cancer survivor Ulia Liashkevich, who also lost her mother to cancer in 2007:

My mother was diagnosed with stage four. Little could be done in terms of treatment. But a dying person is not yet dead. They (the doctors) told me I should take her home, that her death will look bad for their statistics, they threatened that they would perform an autopsy on her body. I did manage to make her last weeks painless, but only thanks to my connections and her friends.

Whenever the government does not provide a certain much-needed service, people have to self-organise. Cancer support groups have sprung around the country. Many have an online presence, such as http://oncopatient.by/ and http://news.tut.by/tag/1814-onkomarker.html. Both were created by cancer survivors aiming to provide resources for fellow citizens fighting the disease.

As one Belarusian neurosurgeons, who preferred to remain unnamed, put it:

Say, I have a patient with a malignant tumour in his head, and he has come to see me with his wife. I do not know whom to console, him or his crying wife. And most importantly, I feel like it is not up to me altogether. I am a surgeon after all, not a psychologist.

Much fear stems from lack of information. Most people feel overwhelmed and lost when diagnosed with cancer. Many turn to God, some look for answers in science. But for now cancer patients in Belarus, it seems, need to rely on their immediate family and friends in dealing with the non-medical aspects of this disease.