Do Belarusians Want to Join the EU?

On 2 March, the Belarusian Institute for Strategic Studies presented a report on geopolitical preferences of Belarusians. The media paid little attention to the document presented by an influential Belarusian think-tank, although the conclusions of this report could be...

On 2 March, the Belarusian Institute for Strategic Studies presented a report on geopolitical preferences of Belarusians. The media paid little attention to the document presented by an influential Belarusian think-tank, although the conclusions of this report could be important for Belarus.

Despite the crisis in Europe, the regime’s anti-European propaganda and the EU’s weak informational policy inside Belarus, the number of Belarusian euro-enthusiasts continues to grow, slowly, but still. At present moment, 17 % Belarusians consistently support the idea of European integration. Moreover, if we held a referendum on Belarus’ joining the EU tomorrow, 38,2% Belarusians would have said “yes”.

The new thing about the research is that the biggest group of respondents – 30,9% – does not want to see Belarus involved in any integration processes at all. 23,3 % Belarusians stand for integration with Russia. This is more than for joining the EU.  But despite state propaganda the level of pro-Russian orientation keeps going down. Primarily because the Russian integration supporters are the people who lived most of their lives in the Soviet Union, and their number in the society is gradually decreasing in a natural way. 20,0 % want integration with both Russia and the EU and see Belarus as a sort of a bridge between the East and the West.

The European Union has an unbelievable Soft Power in Belarus, it stands steadily even under the influence of the external conditions.

On the one hand, the regime has been promoting the anti-European propaganda in the state media for many years, focusing on the crisis in the eurozone or economic problems of the “new Europe” countries. After the election-2010, Lukashenka accused the West in attempt at the state turnover in Belarus.

On the other hand, the European Union has a very weak communication strategy inside Belarus. The EU remains a key donor of Belarus. It has provided € 510 million of technical assistance during the years of independence. But according to BISS analysts only 4,6% Belarusians have any idea of the “European dialogue for modernization of Belarus”. The Belarusian authorities keep silence about the European projects while Brussels put little effort into conveying this information directly to Belarusians.

Despite all this, European integration has become the most stable geopolitical choice. Moreover, there appeared a trend of growth of the pro-European moods in Belarus. The data presented by the Independent Institute of Socio-Economic and Political Studies in September 2003 shows that 23,4 % Belarusians are ready to vote for joining the EU in case of a referendum. This number increased by 15% in 10 years regardless of the unfavourable conditions. The trends when Belarusians should choose between joining the EU and integration with Russia look even more interesting.

Data provided by the IISEPS

The data shows that the pro-European vector of the Belarusians’ preferences increases every year with regard to the integration with Russia. There are several factors that facilitate growth of the pro-European moods in Belarus.

In Belarus, European goods, European living standards, the social model, and culture have high respect. Even Lukashenka, ordering to improve the functioning of a certain enterprise, says “make it work like in Europe”.

Success of the former Soviet block members – the new EU members – also plays a significant role in the pro-European moods of Belarusians. After independence resume, Poland and Belarus started from identical positions, but Poland had become an example of the economic development. The BISS research shows that residents of the Western Belarus, the region that has intensive connections with Poland, have more pro-European moods that others.

Other Geopolitical Choices of Belarusians

Despite the stable trend of pro-EU moods in Belarus, other geopolitical options presented in the BISS studies stay on the table.

There appeared a trend that no one noticed before – pro-independence moods in the Belarusian society. 30,9% Belarusians want neither European integration, nor integration with Russia. 20 years ago, in 1993, 55,1% Belarusians stood for the revival of the Soviet Union, so the views supporting total sovereignty surprise.

Russia is gradually losing its “Western Outpost”. Only 23,3% want to unite with Russia. Given that Kremlin used to see Belarus as a natural part of its empire, today’s results may seriously upset the Russian leaders.

The peculiarity of Belarus lies in the fact that 20,0% Belarusians want to be in a union with both the EU and Russia. On the one hand, it shows poor understanding of the integration processes by ordinary Belarusians. On the other hand, this confirms the Belarusian idea of a country as a bridge between the East and the West.

The pro-European orientation of Belarusians has become a noticeable trend, but we cannot claim its stability.

The people of Belarus have few means of influence the authorities. The regime did not ask the people’s opinions when it took the decision to join the Customs Union. It looks highly possible that Belarusians become just passive observers of the process of further integration with Russia. Kremlin desires to adjoin Belarus to Russia more than the European Union wants to accept it as a EU member.  Moreover, Russia has much more finance and means of influence inside Belarus.

The European choice of Belarusians will always be jeopardised by the opportunistic policy of the regime and Kremlin’s imperialistic approach. The only way to turn the pro-European orientation into reality is to let Belarusians vote in free and fair elections. This may take a long time but it appears Belarusians remain pro-European despite years of propaganda and authoritarian rule. 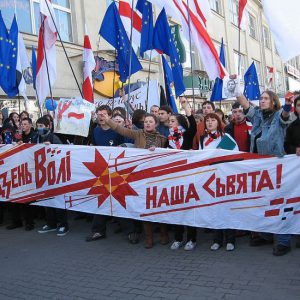 His interview followed several politically-motivated dismissals at Hrodna State University. The dismissals prove that the authorities are afraid of alternative initiatives and thus, exclude them from the public sphere.

One thing is certain – the Belarusian authorities are aware of the power of pulling ''cultural-historical" strings to reach their short-term political goals. Belarusians historians know it only too well.

The local authorities in Hrodna have a problem tolerating a different historical narrative, like the one published in a recent a book on the history of Hrodna, a regional centre in the West of Belarus. The book called 'Hrodnaznaustva' came out in Poland in 2012 and immediately raised lots of controversy. As a result several contributors to this book could not continue their work and left the university. The authorities gradually, and efficiently, appear to have gotten rid of the authors – historians who no longer are permitted to teach at the university, or any other state university.

In September 2012, Andrej Czarniakevich, a historian who co-authored the book lost his job at Hrodna State University. It became clear that the region's governor, Siamon Shapiro, personally decided to dismiss the historian. The reason given was that the publication was published abroad using an 'unclear' source of financing.

Viachaslau Shved, another contributor to the book is a well-recognised professor who has been working at Hrodna State University for many years. At the end of March he lost his position as the dean of  the Department of Belarusian Culture and Regional Tourism. Later on, Shved failed to win a new round of competition for his position as professor and as a result lost his job. He has since suggested that the procedure was politically motivated.

Another historian, Igor Kuzmin, left the same university in protest of the politics of the local officials who are clearly interested in maintaining control and censorship in the field of education.

A Roundtable with the Academics: the BNR Recognised

However, Belarusian authorities are not always tough on different interpretations of history. Proclamations made about the first Belarusian state founded on 25 March 1918 remain a bone of contention for those who adhere to the Soviet version of the history and those who oppose it. The authorities do not recognise 25th of March as a national holiday, while the opposition does.

Usually the authorities allow public rallies on that day. This year, while giving permission to hold the annual event, they stipulated that the organisers were not to bring white-red-white flags of the BNR to the event.  Over a thousand people participated in the rally. Police arrested only seven people – a rather modest number by Belarusian standards.

A major Belarusian state newspaper used the anniversary of the BNR as an occasion to discuss its historical importance. The state newspaper 'Zviazda' organised a roundtable with the participation of scholars from the National Academy of Sciences. Historians and philosophers discussed the Belarusian National Republic and the role of intellectuals in the process of forming national awareness amongst Belarusians. For Belarus, this was a very unusual event.

Any Hope for Belarusian Historians?

Aleś Smalanchuk's interview for Radio Svaboda, mentioned above, gives a rather sad picture of the situation with Belarusian historians and historiography. The state suppresses alternative historical narratives, though occasionally it tolerates and allows some challenging initiatives. At the same time, no educational institutions in the country can seriously take responsibility for the promotion and support for the independent teaching of Belarusian history.

Commenting on the recent dismissals of historians in Hrodna, Smalanchuk also criticised the European Humanities University (EHU), a Belarusian university in exile. He noted that even at this university, which is supposed to support independent teaching and studies of Belarusian history, a number of prominent Belarusian historians such as Zakhar Shybieka and Valiantsin Holubeu have had to leave.

According to Smalanchuk, the university no longer admits new people to study history and political science and the administration is on the verge of demonstrating contempt for the Belarusian language and history with its current policies.

In short, Belarusian historians are struggling to find a favourable working environment not only in their home country, but abroad as well.