Alesia Rudnik 2 July 2018
Since 31 May protesters have blocked the entrance to a recently opened restaurant outside Minsk. Built in Kurapaty, 50 metres from a memorial to victims of Stalin’s repressions during 1937-1940, the ‘Poedem, Poedim’ restaurant has caused heated debates. Conflict... 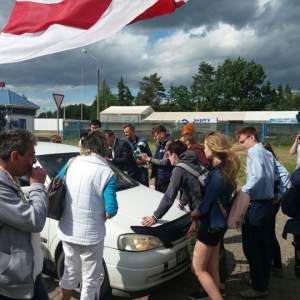 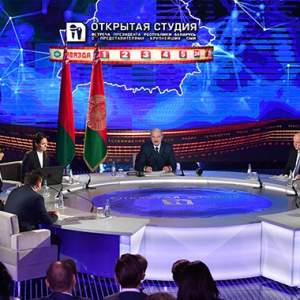 Lukashenka meets with the heads and employees of all the largest state-owned Belarusian media. Photo: president.gov.by

On 10 April, Alexander Lukashenka met the heads and staff of the largest state-owned Belarusian media. He stated that they could not work in the old fashion any longer and called for a new era in their work.

In February Lukashenka replaced the heads of the key official media, bringing in young loyalists in place of the Soviet-minded, pro-Russian old guard. Moreover, in April, the government amended the Law on Mass Media to significantly boost state control over the internet; the last resort of freedom of speech in Belarus.

All these measures target the two main concerns of the Belarusian leadership: the shrinking audience of official media and the growing influence of Russian and Western-financed media in Belarus.

On 10 April, Lukashenka met the heads and employees of all the largest state-owned Belarusian media. He demanded that journalists modernise Belarusian media in order to attract people of different ages and backgrounds. According to the president: “It is hardly possible to get young people away from smartphones and computers and make them read the newspaper, therefore you should expand your presence online and offer [the young] something interesting, correct and objective.”

Frankly, the change in media policy stems from a number of concerns among Belarus’s leaders. First, the state-owned media lost both readership and influence. Belarusians, especially young people, go online where independent and foreign resources dominate. In terms of creativity and efficiency, state media simply cannot compete. The independent information portal TUT.by remains the most popular website in Belarus with 230 million monthly views (although page view statistics cover many subsections which do not relate to news, such as recruitment advertisements).

Over the past month, Charter ’97 had 28.3 million views despite the authorities’ recent blocking of the site . This made Charter ’97 the second largest website in Belarus in terms of page views. The highest ranking official media, Belta, had only 1.7 million views, behind independent sites Belarusian Partisan (5.5 million), Naša Niva (2.7 million) and Naviny.by (2.6 million). A second reason for the urgent change in media policy comes from the overwhelming influence of foreign media on the minds of Belarusians, whether Russian or financed by the West. The Russian media dominated in Belarus since the collapse of the USSR, and Belarusians see them as an indispensable part of television. According to a study by the Information and Analytical Centre under the Presidential Administration, Russian TV channels account for three of the five most popular TV channels in Belarus. Moreover, they occupy the top two spots in the ranking with NTV first and RTR in second place.  However, as Russian propaganda turned increasingly aggressive, the Belarusian authorities realised the extent of its impact on the population.

The professional and effective coverage of the spring 2017 mass protests by EU or US-funded independent media (including Radio Liberty, Belsat and Euroradio) demonstrated that they can be a powerful actor in domestic politics and potentially spur a change in power. The Belarusian rulers therefore also needed a shield protecting them from the western front.

To implement the new media policy, Lukashenka introduced new people into key media posts. Dzmitry Žuk, previously the head of the state information agency BelTA, replaced the legendary Paviel Jakubovič as the head of the SB-Belarus Segodnia holding company, the main producer of official printed newspapers. Jakubovič, who was very close to Lukashenka, had held the position since 1995.

Ihar Lucki left his post as deputy minister for information to take up the leadership of the STV television channel. Another important recent appointment included the promotion of the former deputy head of the National TV and Radio Company, Ivan Ejsmant, to head of the company. He replaced Hienadź Davydźka, who was transferred to lead the public association Bielaja Ruś, the largest Belarusian GoNGO.

Relative youth distinguished the new media bosses from their predecessors. Unlike the old guard who retained the Soviet style and pro-Russian sentiments, the new generation built their careers in an independent Belarus under Lukashenka. Their loyalty to Belarus’s independence and its everlasting leader serves Lukashenka well.

Along with the new appointments, the government introduced amendments to the Law on Mass Media. These amendments sparked criticism from civil society, which sees it as an attempt to tighten control over the internet – which remains the freest source of information in Belarus.

Belarus tightens control over the internet

The amendments suggest voluntary registration of internet resources as mass media under the term “web resources”. The employees of unregistered internet resources will lack the rights of journalists and will not be able to accredit their correspondents. The amendments also introduce a mandatory identification for those posting any materials online, including social media and forum comments. The authorities claim that this will prevent the dissemination of fake news, illegal activity, and discrediting the honour or business reputation of individuals and legal entities. At the same time, this obligation can easily be used by the state as a tool for identifying political opponents or any activity that the authorities consider undesirable.

The law also prohibits the publishing of foreign media products in Belarus without a permit. By doing this, very likely, the government will attempt to limit the influence of Western-financed media inside Belarus.

The editors of TV channels will have to ensure that 30 per cent of the TV broadcasts consist of Belarusian media products. This looks like a response to the domination of Russian content on Belarusian television. Civil society and the political opposition should support this step since they remain the most active proponents of restriction of Russian media in Belarus.

According to the information minister, Aliaksandr Karliukievič, the amendments aim to protect national security and harmonise Belarusian legislation with that of Russia and Kazakhstan in the framework of Eurasian Economic Union. However fair and sound the arguments of the authorities may sound, it is also clear that the new regulations present a handy tool for the control over the last space for freedom of speech in Belarus.

As the representative of the independent Belarusian Association of Journalists put it during the discussion dedicated to law amendments: “We feel like a frog in slowly heated water that will soon be boiling.” 2018 will show how the authorities will actually apply the amended laws.