Lizaveta Kasmach 20 May 2022
Stanislau Shushkevich, the first leader of independent Belarus, who signed the Belavezha Accords to dissolve the Soviet Union, died on 3 May 2022. Just one week later, his Ukrainian counterpart, Leonid Kravchuk, also passed away. Both leaders’ lives reflected... 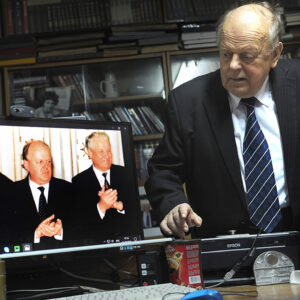 Stanislau Shushkevich, the first leader of independent Belarus, who signed the Belavezha Accords to dissolve the Soviet Union, died on 3 May 2022. Just one week later, his Ukrainian counterpart, Leonid Kravchuk, also passed away.

Both leaders’ lives reflected the fate of their countries after 1991, in constant battle with Soviet ghosts from the past. Shushkevich lost Belarus’ first independent presidential election in 1994, which paved the way for authoritarianism in Belarus. Kravchuk made history as the first president of an independent Ukraine.

The Belarusian regime denied Shushkevich the respect he was due. In later life, they withheld Shushkevich’s pension. And in death, they refused him a place at the prestigious Minsk cemetery. By contrast, Kravchuk received a state funeral attended by current and former Ukrainian presidents. 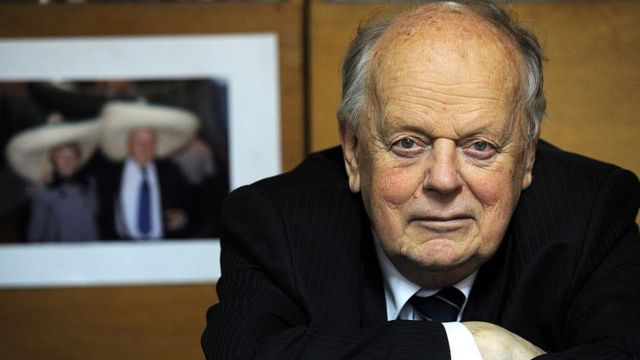 In April 2022, Stanislau Shushkevich, 87, was hospitalized in an intensive care unit, suffering complications from Covid-19. He died at home on 3 May. In his capacity as the first head of independent Belarus, together with Russian President Boris Yeltsin and Ukrainian President Leonid Kravchuk, he signed the Belavezha Accords on 8 December 1991, dissolving the Soviet Union.

Born in 1934 to a family of teachers, Shushkevich spent his childhood in Nazi-occupied Minsk. His family hid a Jewish boy in their house, risking execution at the hands of the Nazis. After the war, he studied physics, completed a doctorate, and built an academic career. Shushkevich entered Belarusian politics as a deputy of the BSSR Supreme Soviet in 1990. After becoming the speaker of the Belarusian parliament in 1991, he served as the first official head of independent Belarus, although executive power rested with the prime minister.

Shushkevich’s political career declined as he lost his position in early 1994. He ranked fourth in the country’s first presidential elections that year, losing to pro-Russian populist Alexander Lukashenka. According to political analyst Valer Karbalevich, Shushkevich’s reputation suffered because he appeared too centrist to deal effectively with multiple crises, despite the fact he was not head of the executive branch.

Under Shushkevich’s leadership, the white-red-white national flag and historic Pahonia coat of arms (now associated with Belarusian independence and democracy) became official state symbols by the minimum required majority of 231 votes. In an interview from 2019, Shushkevich recalled the strong pro-Russian mood among political elites in early 1990.

In late 1993, Shushkevich signed the Commonwealth of Independent States Collective Security Treaty. Shushkevich opposed the treaty but was pressured to sign by pro-Russian deputies. This step drew Belarus closer into Moscow’s orbit.

In 1995, Shushkevich became a deputy in the 13th Supreme Soviet of the Republic of Belarus. He did not recognise the results of the 1996 constitutional referendum, which had significantly increased Alexander Lukashenka’s powers at the expense of the Belarusian legislature. Shushkevich refused to join the modified lower chamber of parliament, the House of Representatives.

Born in the same year as Shushkevich, Kravchuk came from a family of farmers in western Ukraine and made a career in a Communist Party, dealing with propaganda and ideology. In July 1990, he became the chair of the Ukrainian Supreme Soviet and then, in 1991, the first president of independent Ukraine. Like Shushkevich, Kravchuk lost his country’s 1994 presidential elections to the pro-Russian candidate, Leonid Kuchma.

After the dissolution of the Soviet Union, Ukraine had the world’s third-largest nuclear arsenal, while Belarus possessed nuclear missile launchers. Under Kravchuk and Shushkevich, both countries gave up their inherited Soviet nuclear armaments. Western countries welcomed the move. But domestically, their decisions remain controversial. As part of the 1994 Budapest Memorandum, the US, the UK, and France guaranteed Ukraine, Belarus, and Kazakhstan their independence within existing borders in exchange for relinquishing their nuclear armaments. But Russia’s annexation of Crimea in 2014 and the full-scale Russian invasion of Ukraine in 2022 lay waste to the memorandum’s assurances.

Despite the controversial perceptions of Kravchuk in Ukraine, he secured a place in his country’s history through his genuine support for Ukrainian independence. Even though Kravchuk and Russian President Boris Yeltsin both came from the nomenklatura, Kravchuk understood that Russia didn’t want an independent Ukraine—even as the Soviet Union fell apart.

The professor versus the populist

In many ways, Shushkevich was a complete antipode to Lukashenka, who came to power in Belarus in 1994. Shushkevich openly described Lukashenka as an uneducated person, who gave away Belarus’ independence to Russia.

Lukashenka, in his time as a member of the Belarusian Parliament, lied about Shushkevich in his notorious anti-corruption report. In 1997, he froze Shushkevich’s pension, which subsequently dropped in value to $0.20 per month. Belarusian media reported that his wife finally managed to secure him a minimum social pension in 2015.

In September 2021, state authorities removed Shushkevich’s name from school textbooks following his critical comments about the rigged 2020 presidential election. After he passed away earlier this month, the authorities denied Shushkevich’s family a place at the prestigious Minsk cemetery where many prominent Belarusians are buried.

Shushkevich’s funeral made a stark contrast to the state funeral for Kravchuk in Kyiv on 17 May. The Shushkevich family decided on a private funeral service at St. Mary’s Catholic Cathedral in Minsk. Shushkevich had been instrumental in reinstating the cathedral’s status as a church in the 1990s. No state officials were formally present to pay their respects. Lukashenka ignored the funeral. Although some state media briefly reported on Shushkevich’s passing, they failed to mention his role in recent Belarusian history. Belarusians bid him farewell.

CEU Press is releasing the English translation of Shushkevich’s memoirs, A Life for Belarus: The Fall and Postmortal Rise of the USSR, in November 2022. 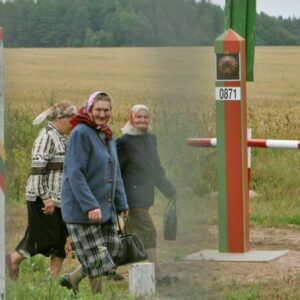 In another unusual move, Belarus recently announced visa-free land entry for Lithuanians and Latvians, effective from 15 April to 15 May 2022. Belarusian authorities claimed the Orthodox and Catholic Easter holidays as the reason for the changes. Governments in Latvia and Lithuania reacted with suspicion. Not only is Belarus viewed as a participant in the continuing war in Ukraine, but Latvia and Lithuania recall the artificial migration crisis that Minsk created not long ago.

By opening its borders, Belarusian authorities appear to be looking to alleviate domestic tensions in society and exploring the possibility of increasing contact with the EU.

From 21 December 2020 to 3 April 2022, private Belarusian citizens could not enter Latvia, Lithuania, Poland, or Ukraine by land. The pretext was to contain Covid-19. But, for whatever reason, no restrictions applied to crossing Belarusian borders by air.

Belarusian citizens could exit Belarus by land once every three months, but only if they presented documented proof of travelling for work, study, medical reasons, family emergencies, or funerals. Only foreign diplomats, members of official delegations, or heavy goods vehicle drivers were exempt from these restrictions. 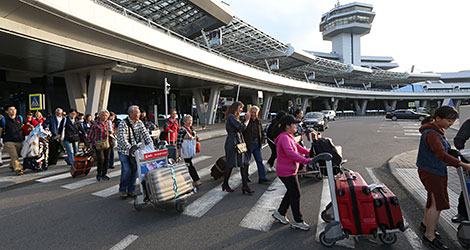 In an unexpected move, Belarusian authorities lifted these limitations on 3 April 2022, returning to its pre-Covid-19 border crossing routine. Foreigners still need to present negative PCR tests or vaccination certificates, except for those who enter Belarus due to the war in Ukraine. Russians are also exempt from Covid-19 regulations.

Also, nationals of 76 countries can visit Belarus without a visa if they travel via Minsk National Airport. Although in October 2021, Belarusian Dictator Alexander Lukashenka amended the visa-free regime to exclude U.S. citizens from the list.

Currently, Minsk Airport serves only a few destinations in Russia, Turkey, the UAE, Georgia, Kazakhstan, Uzbekistan, Armenia, and Azerbaijan. A reduction in flights followed sanctions against Belarus in 2021. The sanctions were in reaction to a pair of events. The first was the forced landing of a Ryanair flight in May 2021, so the authorities could apprehend one of the passengers, opposition blogger Raman Pratasevich. The second event involved Belavia, the Belarusian national airline, flying migrants from the Middle East to Belarus to manufacture a border crisis with Belarus’ neighbours. The events led to limits on air travel to and from Belarus.

A new wave of migration from Belarus?

The lifting of travel restrictions could be an attempt to alleviate internal pressures in Belarusian society. Sanctions are provoking economic decline and prospects for the future remain uncertain. According to a recent World Bank report, a significant reduction in exports, tighter monetary and fiscal policy, and a decline in household consumption would reduce Belarusian GDP by at least 6.5 per cent in 2022.

Belarusians are more likely to consider migration in this situation. In spring 2022, EU countries started issuing short term, tourist Schengen visas after the lifting of Covid-19 restrictions on travel. There is a wait of several weeks for a free appointment slot at any of the EU consulates or visa centres in Minsk.

In March, Belarusians queued at the consular department of the foreign ministry to legalise their documents, even despite the significant increase in processing fees. The legalisation of degree certificates is a necessary procedure to recognise them in another country. This suggests Belarusians are expecting an economic downturn and preparing to work abroad. 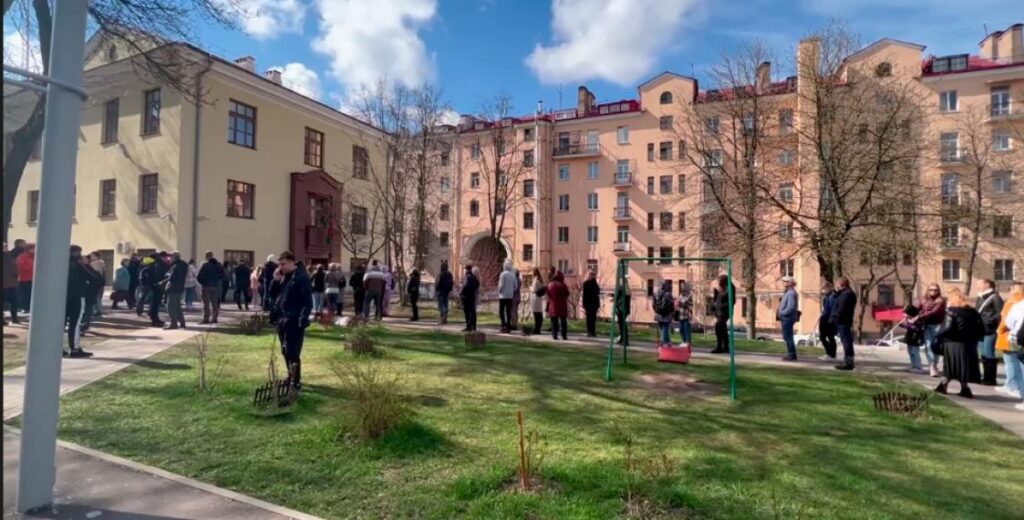 Belstat, the national statistics authority, has not released official data on migration since 2019. But continued state repressions, a deteriorating economy, the relocation of businesses away from Belarus, and the war in Ukraine are all pressures that compel Belarusians to emigrate. For instance, the Georgian Interior Ministry recently reported the number of Belarusians entering Georgia has grown tenfold between 24 February and 16 March 2022, exceeding 15,000 people.

Visa-free entry for Latvians and Lithuanians

On 15 April, in a surprise move following the opening of borders, the State Border Committee announced visa-free entry via land borders for Lithuanian and Latvian nationals for one month. Belarusian authorities reported in the first two weeks about 11 thousand travellers had taken advantage of the changed visa regime.

Lukashenka has repeatedly stated that Lithuanians and Latvians “are lining at the border and ask us to let them through to Belarus.” On April 29, he added, “They [foreign governments] do not let their people travel to Belarus, because people come here to buy salt.”

But petrol is likely to be in greater demand than Belarusian salt. Political analyst Pavel Usau noted the visa waiver could have economic reasons. Belarusian authorities might want to take advantage of lower petrol prices and essentially turn Belarus into a petrol station for Europeans. This might help alleviate the economic pressure from sanctions. Usau suggested the authorities might think of extending visa-free rules to other European states that are geographically close to Belarus.

In response to the visa waiver, Latvia’s Foreign Ministry advised its citizens against visiting Belarus. The ministry cited “significant risks” and warned about possible recruitment “by the intelligence agencies of Russia and Belarus.”

Latvian officials say they have no reason to believe the visa-free regime was enacted for humanitarian reasons or with any good intentions. They recalled the recent “hybrid attack” on EU borders, referring to the 2021–2022 migrant crisis provoked by Minsk in reaction to the deterioration in Belarus-EU relations.

Political analyst Valer Karbalevich suggested the visa waiver is a part of a larger plan by Belarusian authorities. As evidence, Karbalevich cited a letter dated 6 April by Foreign Minister Uladzimir Makei to EU foreign ministries. In the letter, Makei writes about the need to “rethink the paradigm that will determine the future of Belarus-EU relations and that of the European security.”

But circumstances have changed significantly since 2014. Levels of trust between the EU and Belarus are extremely low. Small, symbolic steps cannot outweigh Belarusian dependency on Russia or a set of bigger issues, such as the growing number of political prisoners and the stated intention to expand Belarus’ death penalty. As long as Russian troops remain in Belarus and use Belarusian facilities to attack Ukraine, it is hard to take Lukashenka’s clumsy attempts at resuming contact with the EU seriously.

The visa waiver scheme and the opening of borders have not been completely ineffectual. These decisions have benefitted ordinary people. Belarusian citizens are now able to travel to the EU without spending a fortune on flights from Minsk, and Latvians and Lithuanians can visit their family and friends in Belarus, or just buy cheap petrol.