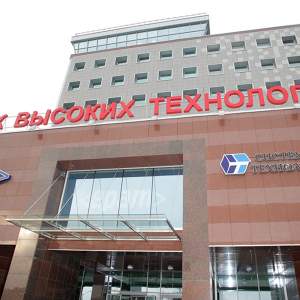 Alexander Lukashenka considers a transition to a multi-party political system. Russian ambassador Alexander Surikov says no deep integration of Belarusian and Russian industries has occurred thus far. Lukashenka says Belarusians need to know the history of the Belarusian People’s Republic, but should not be proud of it.

46 new companies take up residence in the Belarusian High Tech Park in a single day. Lukashenka criticises the government for its poor performance in 2017. Brest Stocking Mill presents a pair of socks to Canadian prime minister Justin Trudeau.

Belarus considers a transition to a multi-party political system. During a meeting with constitutional court judges on 16 March, Constitution Day, Lukashenka mentioned possible future amendments to the constitution. He particularly addressed the topic of a full-fledged multi-party system, reports Zviazda. Proposals to create a party on the basis of the Bielaja Ruś GoNGO (government-organised non-governmental organisation) have long circulated, but the president firmly opposes turning it into a pro-government party.

“Some say that it is high time to delegate certain powers to political parties in order to solve the human resources problem, and this is correct. Others say that the time has not yet come. If society is willing to create a true multi-party system, we need to clearly establish its role in the constitution. However, at this stage, the parties lack sufficient membership,” Lukashenka submits.

Russian ambassador Surikov: deep integration of Belarusian and Russian industries has not happened so far. Ahead of Russian presidential election, Soyuz newspaper talked to the Russian ambassador to Belarus about present and future of the Union State of Belarus and Russia. Surikov does not foresee any significant changes in the relationship between the countries. The Union State will remain a model for integration on the post-Soviet space for a long time.

However, he acknowledged that deep integration of close industries in the two countries has not yet happened and much should be done. “We need to think about what functions to transfer to the supranational level, how to make the Union State a legal entity, so that it has a voice in the international arena,” he said. Surikov also insisted that equal hydrocarbon prices will apply to all members of Eurasian integration projects by 2025.

Lukashenka meeting with the judges from the Constitutional Court. Photo: zviazda.by

The president drew attention to the fact that this period has not been studied thoroughly, and that existing information remains very contradictory. The founders of the BNR sought independence for the country, but they were ready to collaborate with any foreign power for attaining this goal and would fall into dependence anyway, writes Belarus Segodnia.

On 13 March, the Belarusian High Tech Park registered 46 new resident companies. An expansion of this scale never before occurred in more than ten years since the park’s establishment, writes Belarus Segodnia. This became possible due to the adoption of Decree No 8 “On the development of the digital economy” which becomes effective on 28 March. Last year, service exports from the park exceeded one billion dollars. Almost half of this volume goes to the EU, and 43% to the USA.

Belarusian companies provide IT services to global corporations including Samsung, HTC, the London Stock Exchange, the World Bank, Microsoft, Coca-Cola, Toyota, Google, and British Petroleum. About 1 billion people in more than 150 countries use mobile applications developed in the park. Such success can be largely attributed to the special legal status of the park’s residents. They are exempt from all corporate taxes, and income tax is set at only 9%. The decree extends this special tax regime until 2049.

Lukashenka criticised the government for poor performance in 2017. On 2 March, the Belarusian president discussed reports provided by the government, the National Bank of Belarus, regional executive committees and the Minsk City Executive Committee. He criticised these organs for failings in economic policies, reports Belarus Segodnia. According to him, the government concerns itself only with the formal achievement of indicators. Over the past 7 years, world GDP grew by 25%, while the Belarusian GDP growth did not even reach 6%. The president noted that Belarusian regions develop unevenly – only Minsk, and to some extent the Hrodna region, showed clear progress.

Lukashenka also criticised the unfair competition on the Russian market despite the existing economic union and urged the government to seek new markets. Lukashenka demanded that in the next five-year period, Belarus reaches $100bn of GDP from its current level of $54bn. Only this will make an average salary of $1,000 possible. 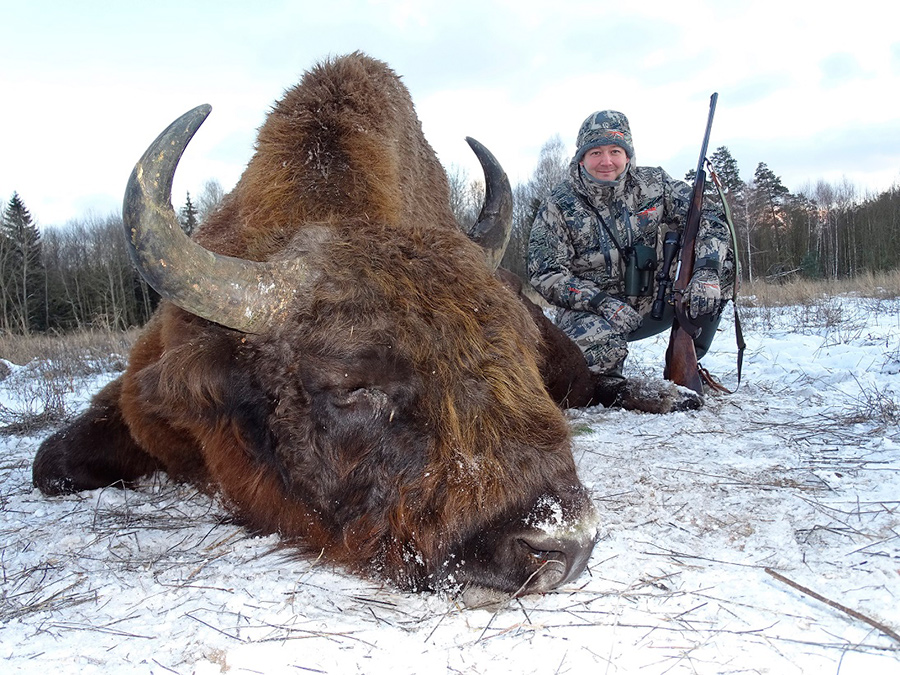 Belarus attracts more hunters from Europe. Last year the number of hunters coming to Belarus from the European Union grew by a third thanks to the new visa-free regime. If, as expected, the government increases the period of visa-free travel to ten days, the effect will be even more impressive, writes Respublika. Europeans know about the abundance of wild animals in Belarusian forests, including species that are quite rare in the continent.

They are particularly interested in hunting bison, moose, wood grouse and wolves. The wolf is almost extinct and protected in the EU, yet in Belarus the wolf population grows. Visitors do not need to wait for a month to get a weapons licence since all state hunting companies offer it for rent. Last year, the revenues from hunting exceeded $2m, half of which came from foreigners.

The Brest Stocking Mill sent an unusual gift to Canadian prime minister Justin Trudeau. The Canadian leader is known around the world for his brightly-coloured socks, which he often wears to official events. With this in mind, Brest residents decided to send a parcel to Mr Trudeau: a set of exclusive socks featuring the cartoon dog Snoopy.

“He loves original socks and we have been working to develop new designs recently. Our main goal is to expand knowledge about Belarus, so we wrote to him that our countries have much in common. A large Belarusian diaspora lives in Canada, and the world-famous ice hockey player Wayne Gretzky has Belarusian roots,” explains company director Siarhiej Žaŭniarovič. Trudeau’s aide recently confirmed that they received the parcel, writes the Minsk Times. 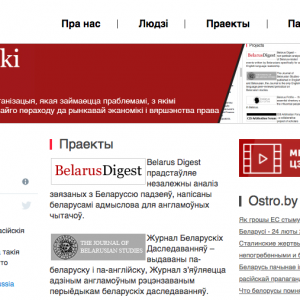 In February Ostrogorski Centre analysts discussed the Holocaust memory in Belarus, the clash between Belarus and Lithuania over common history, as well as the sentencing of pro-Russian bloggers who remained under investigation for the past year.

Lizaveta Kasmach discusses what Belarusians remember about the Holocaust. A distinct lack of reflection over the largest tragedy of the 20th century marks mainstream perceptions of the Holocaust in contemporary Belarus. Among Belarusian citizens, the Holocaust serves as a background for narratives of wartime heroism. Any commemoration of the tragedy often depends on individual initiatives and support from abroad. In this respect, a comprehensive discussion of the Holocaust as part of the school curriculum might pave the way towards a better understanding of the past.

Ryhor Astapenia analyses how common history divides Belarus and Lithuania. Instead of uniting the two countries, shared history actually divides them and puts Lithuania on the horns of a dilemma. On the one hand, it would like Belarus to transform into a Western democracy. On the other hand, it recognizes that the Western identity of Belarus challenges Lithuania’s own identity since it requires both countries to draw on the same historical heritage.

Vadzim Smok writes about the finale of the criminal prosecution of pro-Russian bloggers. Their case sets a precedent. Never before have the Belarusian authorities brought a criminal prosecution for Belarusophobia and pro-Russian propaganda. Yet, surprisingly, the Russian government’s official public reaction has been muted. By trying pro-Russian journalists, the Belarusian authorities draw a red line with regards to propaganda in the bilateral relationship with Russia.

The Journal of Belarusian Studies 2017 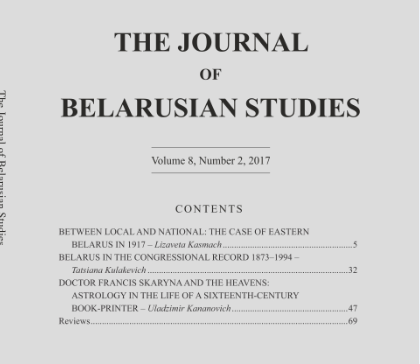 The Ostrogorski Centre in cooperation with the Anglo-Belarusian Society is pleased to present the latest issue of the Journal of Belarusian Studies.

The 2017 issues includes articles on Belarusian national mobilisation and the practical challenges encountered by national activists in eastern Belarus during 1917, American political attention towards Belarus through the research of the Congressional Record, and the sources of astrological knowledge for the 16th century Belarusian publisher Francis Skaryna.

Established in 1965, the journal is oldest periodical on Belarusian studies in the English language.

The Belarusian leadership understands that the Russian media strongly influence mass opinion in Belarus and wage information attacks against official Minsk. At the same time, Minsk cannot go too far in countering it, such as by closing Russian channels which broadcast in Belarus, says Ostrogorski Centre analyst Alesia Rudnik in a comment to Polish radio.

Following staff cuts, the Belarusian foreign ministry will face difficulties promoting the interests of the country abroad, including on economic issues. Many countries try to economise on their diplomatic service, but they also clearly identify their priorities. First of all, Belarus should cut the branches of its embassy in Russia, since it has as many as ten spread across the country, says senior analyst at the Ostrogorski Centre Igar Gubarevich in a comment to Polish radio.

The Ostrogorski Centre’s associate analyst Siarhei Bohdan, in an article for the Azerbaijani military online publication armiya.az, discusses military cooperation between Belarus and Azerbaijan. In particular, he considers the potential sale of the Palanez multiple launch rocket system to Baku, as well as Armenia’s role in this cooperation.

Russia increasingly routes cargo and passengers around Belarus. Minsk’s losses from these Kremlin policies will be considerable both economically and politically, says Bohdan in a comment to Polish Radio. The only alternative for Belarus is providing transit routes for new passenger and cargo flows between regional countries, the EU and China.

In a further comment to Polish radio, Bohdan talks about how, in recent years, the Belarusian authorities have been phasing out the policy of expanding access to the sea through other countries of the region: Poland and Ukraine. Relations with Lithuania continue to deteriorate because its leadership sees Belarus as a threat. This all weakens the position of Belarus and promotes the interests of the Kremlin.

The BelarusPolicy.co database has been enriched with a number of publications by Belarusian think tanks.

The Ostrogorski Centre is a private, non-profit organisation dedicated to analysis and policy advocacy on problems which Belarus faces in its transition to market economy and the rule of law. Its projects include Belarus Digest, the Ostrogorski Academy, the Journal of Belarusian Studies, BelarusPolicy.com, BelarusProfile.com and Ostro.by.