Belarus is reeling from the effects of the wobbling oil price and Western-imposed sanctions on Russia.

The economy is now paying for the absence of liberal reforms through a decrease in manufacturing, the depreciation of the national currency and the... 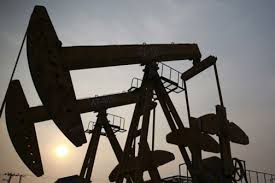 Belarus is reeling from the effects of the wobbling oil price and Western-imposed sanctions on Russia.

The economy is now paying for the absence of liberal reforms through a decrease in manufacturing, the depreciation of the national currency and the need for budget cuts. The lack of good economic and political news suggests that the recovery will take a long time.

But approaching the bottom provides an opportunity to fix bad economic policies and to build a new economic structure using innovative technologies.

The first economic figures of the new year look far from promising. On 16 of February 2015 Belarus reported that its industrial production fell by 6.2 per cent in the year to January and approximated a $3.7bn loss. 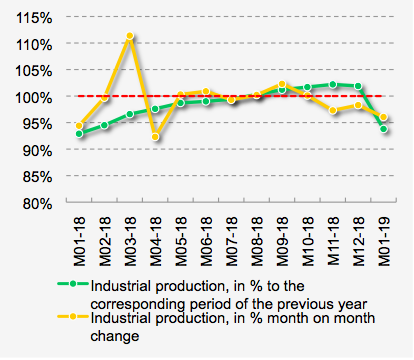 The indicator shows that manufacturing is shrinking. But a number of analysts have pointed out that the Belarusian official industrial production indicator displays some predictable seasonal variations. That complicates any attempt to line the numbers up.

From this point of view the resulting figures on month-on-month changes are especially upsetting. Industrial production has crumbled under the pressure of Russia's economic malaise with this indicator sinking for three months in a row: 2.7 per cent decline in November, 1.7 per cent – in December and the recent 3.9 per cent drop in January. Industry wants to see fewer taxes, cheaper energy and less bureaucracy. On these things the government is moving too slowly, if at all.

Russia is Belarus's Biggest Economic Partner – and Its Most Difficult One

Although the latest figures show industrial production decreasing substantially, it has been flat for the first half of the year. Economic growth is still unviable, with GDP increasing by 1.6 per cent in 2014. But consumer demand remains robust, rising 18.2 per cent in December and overall by 6.6 per cent last year. A bigger share of the market is going to importers (Russia in particular) (see chart).

Imports of cars from Russia rose over threefold in 2014 due to Russia's ruble depreciation. But the new year has seen the ban on importing European vegetables and fruit upheld. Furthermore, Belarusian transit companies trying to export to Kazakhstan face steep non-tariff barriers on these goods, such as from 30 November 2014 the transit of food through the territory of Russia is permitted only through check-points on the Russian border of the Customs Union.

For the moment Belarus is moving towards administratively managed trade with Russia, at least in some sectors despite a free trade agreement.

Belarus is short of cash. Without fresh bail-out money, it faces a serious problem with its public debt. In 2014 Belarus had to repay $2.4bn of foreign government debt. But today the pressures on the country is even more acute. Its economy will need to reimburse $4bn of foreign debt; however it does not know how and where to obtain the entire amount.

According to the 2015 budget, Belarus will ramp up $1.9bn from saved duties on petroleum products produced using Russian crude oil and from exporting Belarusian oil. In order to finance other parts of the debt it plans to use new intergovernmental loans, borrowings on foreign markets and increases in tax proceeds.

The government might impose a special duty for the right to export oil, increase excise taxes on tobacco and alcohol, and raise VAT and income tax rates. In 2015 Belarus is attempting to sustain a budget surplus, and to cut its debt burden. But then again these prospects have darkened further. More immediately, Belarus has asked for $2.5bn loan from Russia this year.

However, whatever happens, the failings of the Customs Union should not have a chance to happen. Russian authorities according to the Russian Minister of Finance Anton Siluanov agreed to provide financial support for Belarus in 2015. That would give them the painfully obvious leverage to influence the country’s decisions after the Belarusian elections, possibly this year or early next year, in order to further deepen economic and political integration.

The Belarusian authorities have called for “spongers” (people who do not officially work, but earn substantial profit) to “pay their fair share”. They think the Belarusian “rich” should pay more taxes. The government’s decision is on the way. A one-time fee on about the 500 thousand able-bodied Belarusian citizens officially not working, not paying taxes and who do not participate in the financing of public expenditures, but at the same time enjoy the social benefits provided by the state soon will become the norm.

According to the draft decree on the promotion of employment, able-bodied citizens, who for more than six months paid no taxes will be required to pay an annual fee of around $250. Evasion, untimely or incomplete payment of the fee will be subject to administrative liability. However, establishing such a tax fee is not the best way of extracting extra money for the budget. It would raise revenues of about 0.16 per cent of GDP and do nothing to make the exceptionally complicated Belarusian tax system more efficient.

According to the new tax rules effective from 2015, some personal debts are now subject to tax. First of all, it applies to individuals who have received a loan or credit from other individuals (not individual entrepreneurs), from foreign organisations that do not have representative offices in Belarus, or from foreign entrepreneurs.

Second, the new rules apply only in cases when citizens bought something expensive (car, real estate, so on), but his personal income does not cover costs. If the declaration indicates that the acquisition is made with borrowed money, then it will be liable to income tax except for loans from Belarusian organisations (banks and other financial organisations) and individual entrepreneurs. Finally, tax does not apply to money borrowed from relatives.

Many independent economists agree that imposing any additional taxes would not create jobs, but would harm business and social confidence. They think the country can fill the budget hole also by spending cuts, saying that deficit reduction works best when most of the burden falls on it. That means that middle-class entitlements will have to be reduced, no matter what the tax supporters say. The result would be lower rates, more revenue and a more efficient and progressive tax system. 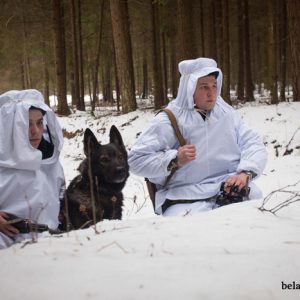 Border troops also known as the Belarusian Green Berets have been considered the elite of the armed forces since the Soviet times. Lukashenka and both of his older sons served in the border guard, according to the president’s official biography.

Border troops operate along most of Belarus’s perimeter, with the exception of the 959 km stretch of the border with Russia. One of the busiest sections is the border with Poland and Lithuania, due to the high rate of smuggling incidents. 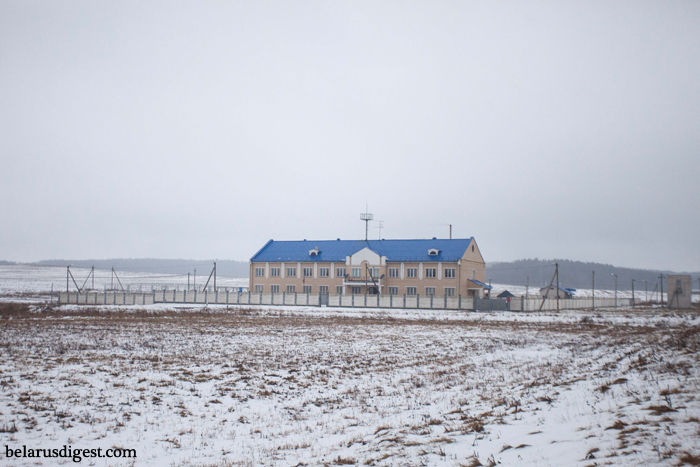 The Belarusian-Lithuanian border was first established in 1990. Then the borderline split a few villages into two parts. For example, village Pickuny is situated in Ashmiany region of Belarus, but its second half, known as Norviliškės, lies on the Lithuanian side. The locals are still getting struggling the idea of the border in their village. 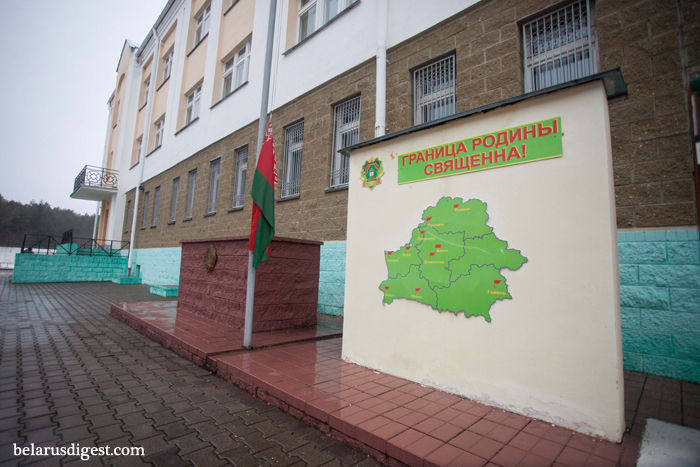 The Losha Border Guard Post monitors a 30-kilometer stretch of the Belarusian-Lithuanian border in Astraviec region. Its barracks were built by the Union State of Russia and Belarus. “The Motherland’s Border is Sacred” says the big board in front of the border guard post. 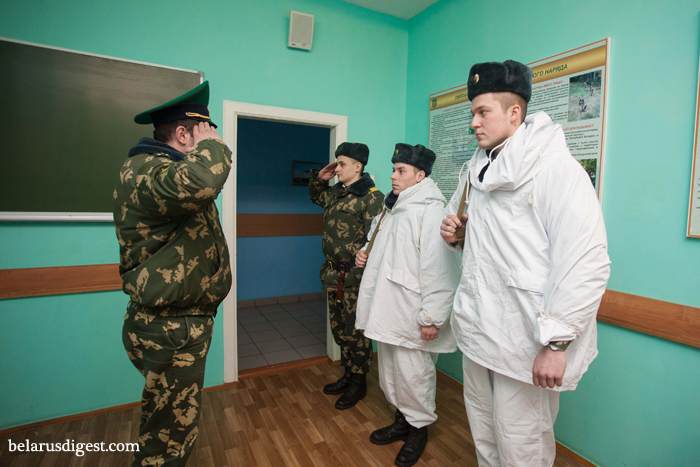 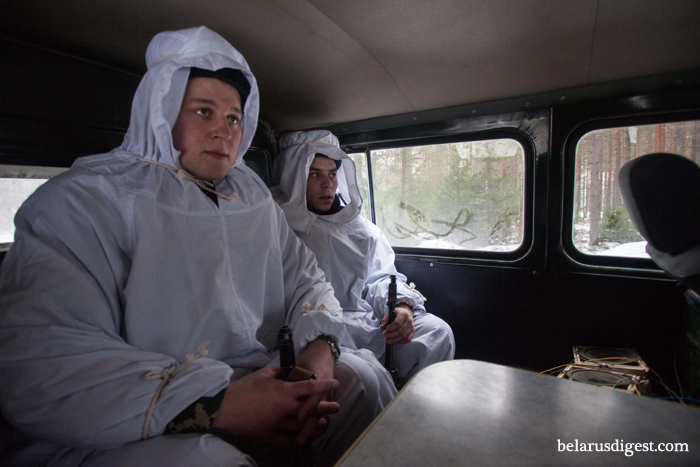 The guards protect the border round the clock. Some guards stay hidden watching the area, sometimes up to a few hours in one place, while others walk along the border. 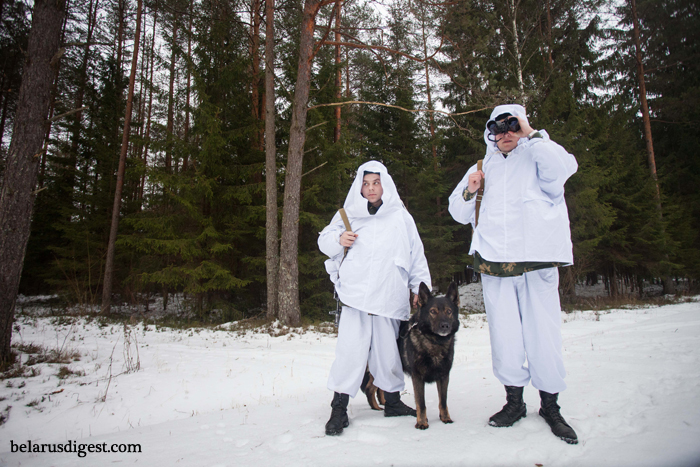 Border guards carry automatic guns, with 50 bullets each, as well as a pistols, handcuffs, night vision binoculars and radios. 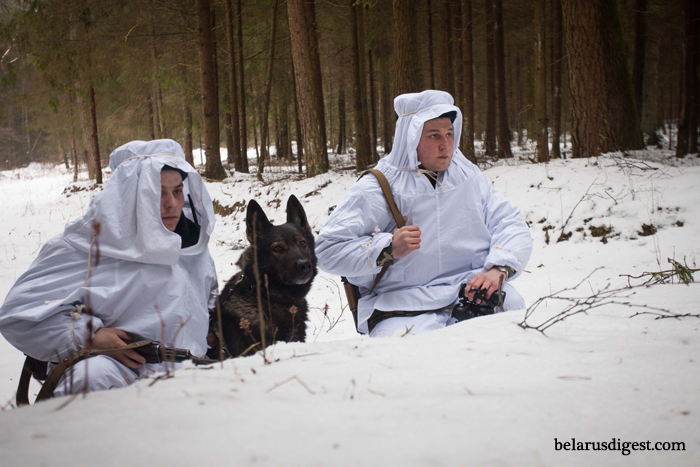 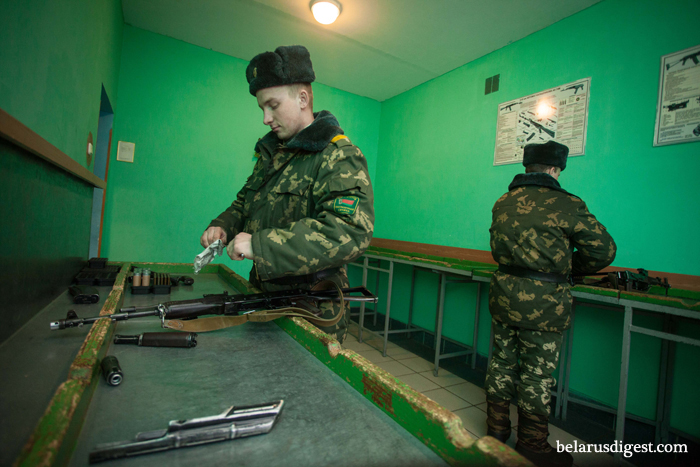 Border guards regularly take care of their weapons to make sure they are in proper working condition. 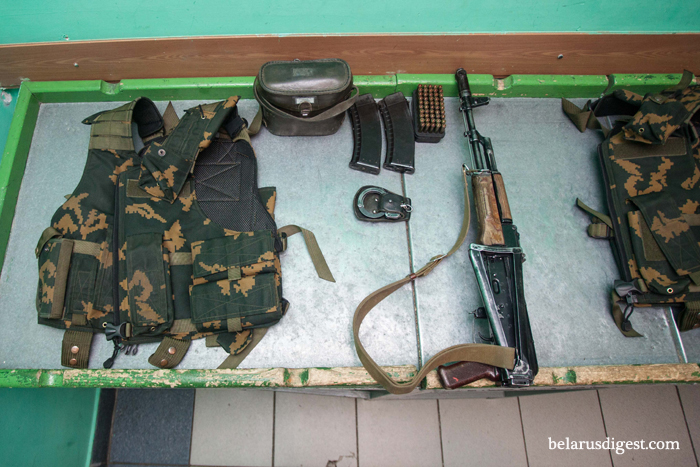 As the guards change, they clean their weapons and surrender them into storage. 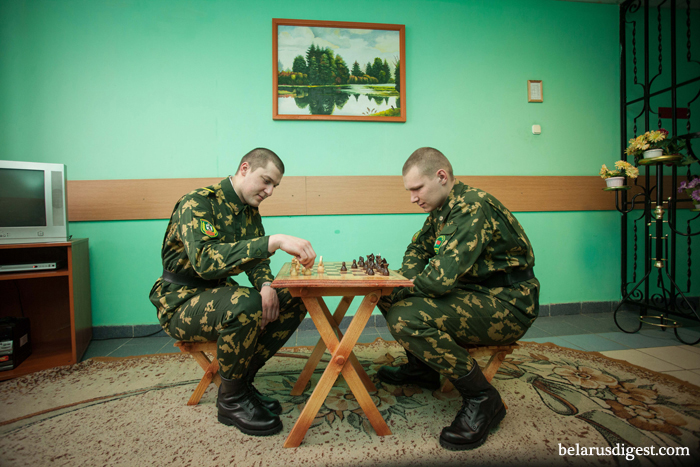 Every guard post includes a room for “psychological relaxation” with a TV and a chessboard. 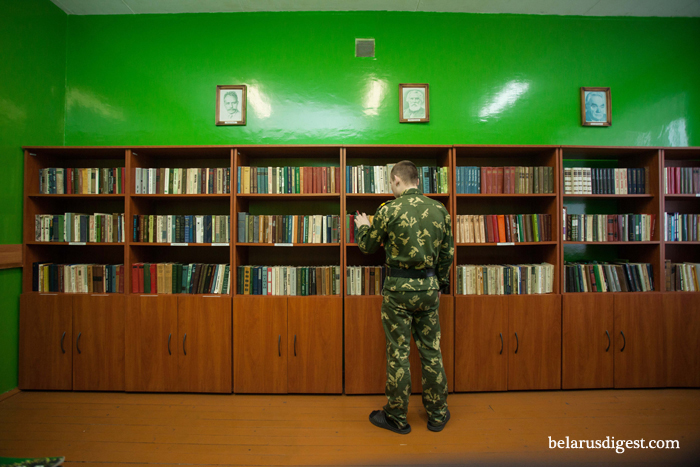 In their spare time, servicemen can borrow books from the guard post’s own library. 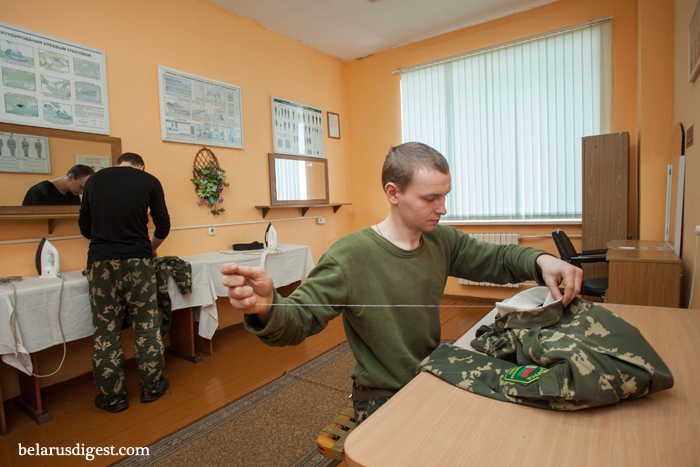 The border guards are off duty and are repairing their uniforms before they go to bed. 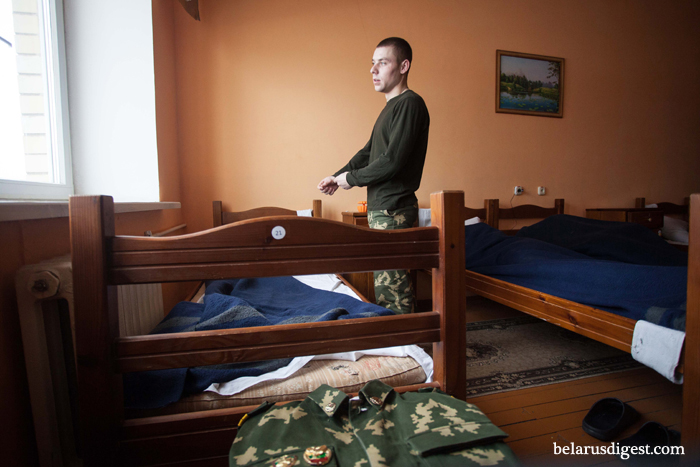 The Belarusian Army is based on the principle of territorial defence. Soldiers are expected to better defend the area where they come from. Conscription into the border guard follows a different logic. 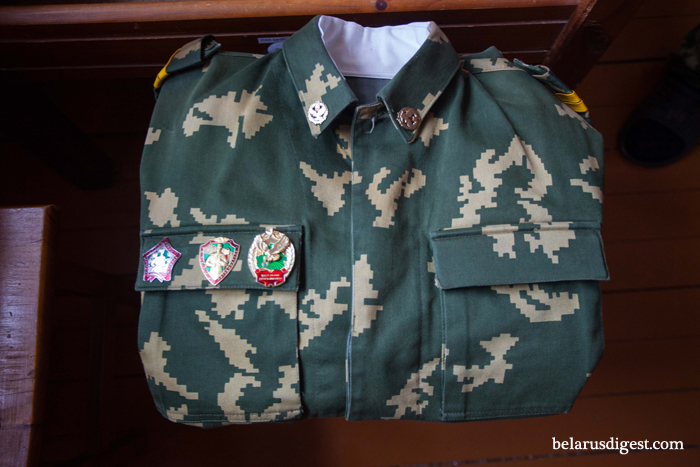 The Belarusian-Lithuanian border is protected by the servicemen from Mazyr and Mahiliou in order to minimise the temptations of locals to smuggle, accept bribes, or helping their relatives. 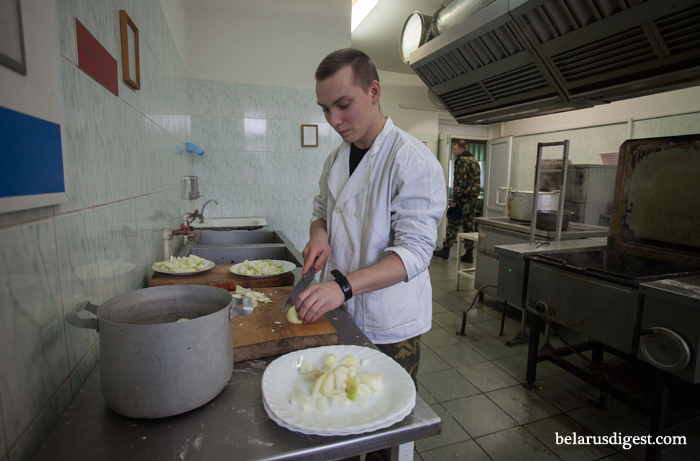 Border guards at the Losha Border Guard Post were all drafted from other parts of Belarus. Local contractors are hired only for cooking, dog handling, and driving. 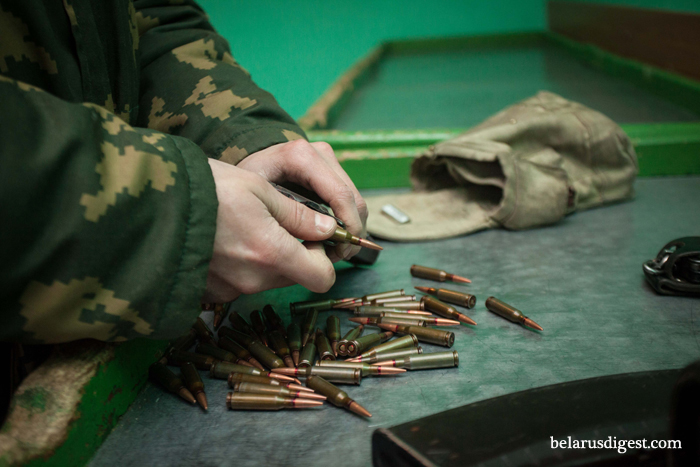 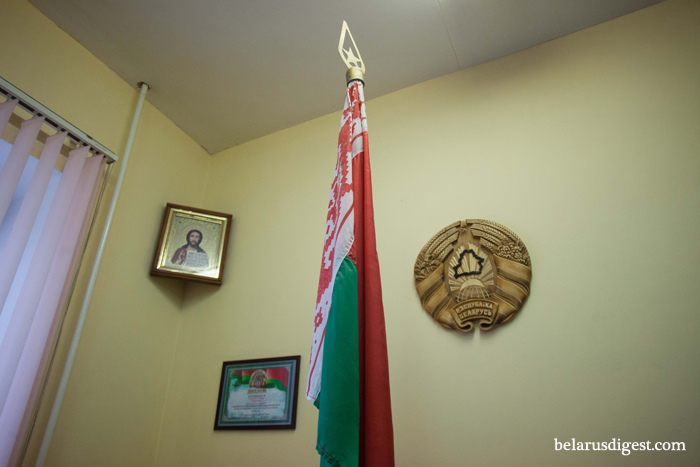 A Belarusian flag, accompanied by coat of arms, a framed diploma, and an orthodox icon adore the walls of this commander’s office.