The Rise of Belarusian Handball

In 2012 Belarusian handball players were among the ones to thank for that. After a longest decline of...

Both Europe and the world know not only that Belarusian handball exists, but also its face – Sergey Rutenko.

Sergey Rutenko: But Perhaps A Wizard?

Sergey Rutenko comes from Minsk region, township Pryvolny. Fond of sambo wrestling and basketball as a child, he finally chose handball. The choice has proved to be right.

The sharp rise of Sergey Rutenko’s carrier started in 2000 with silver medal at the European Handball Junior Nations Championship. Shortly, he left Belarusian “Arkatron” and moved to Slovenia. There he played first for “Gorenje” (afterwards substituted for the leader of Slovenian handball – “Pivovarna Laško”), as well as Slovenian national team. In 2005 he moved to Spanish “Ciudad Real”, in 2009 – to “FC Barcelona”. 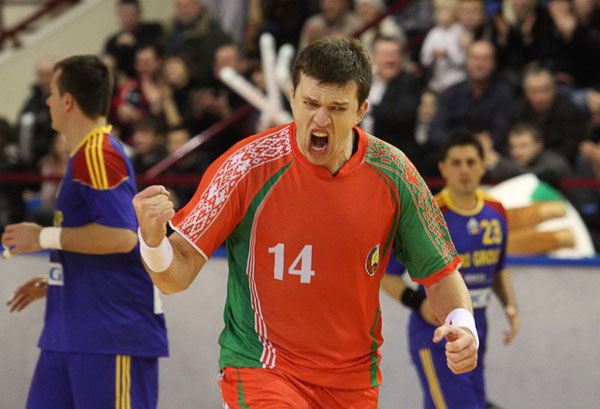 In order to save the right to play in Spanish League in 2008 Rutenko had to accept citizenship of Spain.  Like earlier in Slovenia, the Spanish invited him to play in their national team. Acceptance of such proposal could allow Sergey to make a new huge step in his carrier.

But this time he seemed to care about the carrier’s development less: in 2008 Rutenko expressed the wish to return to the Belarusian national team. In September 2010 Sergey finally got the right to play for his motherland and soon captained the national team.

Still, Rutenko has not turned Belarus into an unconquerable handball empire instantly. Soon after his arrival, defeats to Denmark and Russia followed. Rutenko’s  11 goals in the two games could not save Belarus. In this regard, Sergey had only one response:  “I’m not a magician”.

But perhaps he is close to one. For the first time he is playing for the Belarusian national team and for the first time since 1995 Belarus is participating in the World Men’s Handball Championship. Rutenko participated in all the 2012’s games with Slovakia, Lichtenstein and Romania – the games that have paved Belarus’ route to the Championship. And within its first circle is bringing to the Belarusian national team almost a half of its goals.

“Dinamo”: The First Among Equals

In 2012 after the victory over Turkish “Beşiktaş”, “Dinamo Minsk” burst into play-off of the EHF Champions League. This sole fact proves the team’s recent progress. In 2010-2011 “Dinamo” fell out of the Championship even before 1/16.

Not only did the team have the chance to conquer for the place among top 16 teams of Europe. It seems to succeed in implementation of this chance. As of now, “Dinamo-Minsk” is taking the third place (out of 6 teams) in its Group D: after “FC Barcelona” and “Füchse Berlin”. However, “Füchse Berlin” is only one point ahead of “Dinamo” and the latter still have 3 circles of games to change the ranking.

As a pleasant contrast to hockey “Dinamo Minsk” and football “BATE Borisov” handball “Dinamo Minsk” has real competitors within Belarus. “Handball Club Meshkov Brest”, as well as “SKA Minsk” does not allow “Dinamo” to relax. In these circumstances fans’ hopes, that the team’s results will only grow, can reasonably strengthen.

Less fortunately, “Dinamo Minsk” is far from being a purely   Belarusian team. More than half of its players are foreigners. Last year it even got an unpleasant name of branch of the national team of Ukraine. 5 Ukrainians are playing for the club!

Especially, the game with “FC Barcelona”, which will bring an additional chance to watch Sergey Rutenko at work.

The today’s achievements, however, represent just a vague shadow of Belarusian handball’s success of Soviet times. “SKA Minsk” still ranks as one of the most titled clubs in Europe. For three times it won EHF Champions League (1987, 1989 and 1990). Twice – in 1983 and 1988 – it wrested EHF Men’s Cup Winner's Cup.

Up to 1992, Belarus supplied most professional players to the USSR team. To put it into figures, at 1988 Olympics the victorious USSR team included 5 players from Belarus! 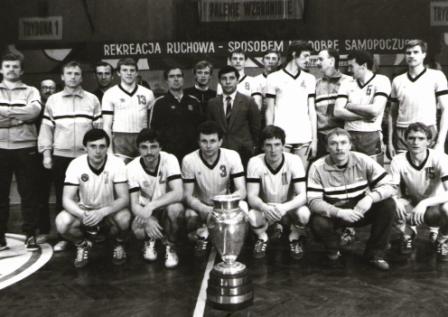 But almost for 20 years up to now Belarus has been wasting the talent of its youth. Salaries of children’s coaches are insufficient to make ends meet. Low popularisation of handball decreases children’s and parents’ motivation to take up handball.

The Belarusian national team and "Dinamo" have proved Belarusians' talent for handball is still strong.

Will now the state prove the ability to display these talents? It really seems to be an urgent task. Otherwise, Belarusian clubs will have to rely on foreign mercenaries, while Belarus – to hope that its all children will, like Rutenko, sacrifice their personal profit for the motherland's sake.

Darya Firsava
Darya Firsava is a Minsk-based lawyer working on her PhD and leading a number of educational projects in Belarus.
all articles »
Dinamo Minsk handball Sergey Rutenko SKA Minsk Sport in Belarus

About a thousand Belarusains received an unusual anonymous SMS text on 4 January.

According to the message the National Bank of Belarus had secretly decided to devalue the national currency by more than 60%. It was predicted that the new exchange rates were to appear immediately after the Orthodox Christmas celebrations – on 8 January.

Belarusian KGB immediately started to investigate the incident. The message turned out to be a provocation. The currency market stayed calm. But the very fact that such things happen reveals tensions in society.

The issue of devaluation has become one of the phobias that the people of Belarus have because of their recent memory of economic turmoils. When it comes to their own money they no longer trust government officials, including the president.

As prospects for real devaluation in 2013 look more likely Belarus becomes increasingly vulnerable to all sorts of provocations that can destabilise currency markets and even the social situation at large.

SMS Devaluation that Failed to Materialise

The text sent on 4 January around to a thousand subscribers of the leading mobile operators MTS and Velcom contained the same text:

As it always happens, the rumour quickly began to circulate in the social networks. New interesting stories started to emerge. Apart from the general fear of a New Year devaluation, similar to the one which happened in 2009, for many the rumour resonated with independent economists’ projections about high prospects for devaluation in 2013.

KGB: The Provocation Came from India

For an attentive person it was clear from the very beginning that the text could not be genuine. Its authors made a mistake (maybe intentionally): the smallest bank note in Belarus is BLR 10. Thus, €1 could not cost BLR 18,116.

However, for a common citizen all this looked very frightening. Remarkably, the phone number that the texts were sent from in reality belongs to the National Bank’s call center.

So not only the National Bank but even the KGB had to react quickly. They immediately called it “nonsense and a provocation” and said that its perpetrators would be severely punished.

A bit later the KGB categorised the case as “hacking” and said that the messages came from a server located in India. Further investigation is underway.

The press-secretary of the National Bank stated that there were absolutely no reasons to devaluate the rouble and promised its stability.

Indeed, the rumour did not materialise. On 8 January the rate of one US dollar was BLR 8,630 and of one Euro 11,230 – much lower compared to what the SMS had predicted.

In fact, in recent years devaluation has become one of the most popular topics which Belarusians often discuss at New Year's celebration.

In 2009 the authorities made an extremely unpleasant New Year gift for the whole nation. Without any prior announcement they devalued the rouble by roughly 20% on 2 January of that year. The government chose very tricky timing: the people were still celebrating and did not pay much attention to what was going on around. But when they recovered, millions realised that they had lost thousands of US dollars because of the government’s decision.

Belarusian economist Leonid Zaiko calculated that overall the citizens lost about $1 billion from that devaluation.

Needless to say that for many Belarusians that was huge money. The government’s act left a deep psychological scar. And in 2011 the scar became even deeper.

Importantly, in the previous cases the National Bank and the government never even tried to prepare the citizens for their harsh decisions. On the contrary, they made official promises that no need for devaluation existed and that people could relax.

Not surprising, therefore, that today the Belarusians have little trust in what officials say about money. Many even tend to listen to what the head of the National Bank, Prime Minister or Lukashenka say and do the opposite.

Since the devaluation of 2009 each year at the end of December long queues form in front of currency exchange offices. Having the government’s dishonesty in mind, thousands of people prefer to exchange some extra Belarusian roubles for hard currencies before another New Year arrives. They do it just in case.

Is Devaluation Likely in 2013?

At the moment the authorities do not see much point in devaluating the rouble. Even though the last months of 2012 turned out bad for the country’s foreign trade, overall last year was comparatively good for the current account balance.

The National Bank has slightly more than $8 billion in gold and foreign exchange reserves (by the IMF standards). This sum cannot pay for three months of imports and, therefore, is low. But it is still enough to make some tactical currency interventions.

Moreover, the liquidity (Belarusian roubles) is concentrated in the reserves of commercial banks. So the currency market does not feel the pressure of the additional 40% Belarusian roubles that the National Bank issued in 2012.

However, future problems are looming large. Many factors point to a probability of devaluation throughout the year.

First, the country is again facing foreign trade deficit and it is hard to say what can become its foreign trade locomotive (like solvents were in 2012). Second, Belarus has to pay the record sum of $3.1 billion in its foreign debt. Finally, the problems with exports might necessitate a devaluation to help exporters.

In the light of these factors the SMS case seems highly symptomatic. Bad economic policies make Belarus vulnerable to all sorts of shocks and provocations. One day they may destabilise not only the financial market but even the social situation in the country.