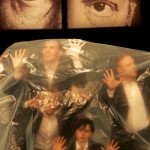 Washington, D.C. — The Georgetown University Theater and Performance Studies Program, in association with Woolly Mammoth Theatre Company and in cooperation with the We Remember Civil Initiative,...

Effectively banned in its home country, this underground troupe from Minsk, Belarus will perform the area premiere of “Generation Jeans” on Sept. 15, a freedom fighter’s semi-autobiographical monologue which details growing up as a member of the counterculture that regarded jeans and Western pop music as a symbol of rebellion.

On Sept. 16, the company performs the U.S. premiere of “Discover Love,” based on the true story of Irina Krasovskaya, whose husband Anatoly, a businessman who supported the Belarus opposition movement, was kidnapped and murdered. The performance takes place exactly 10 years after Anatoly and Victor Gonchar, the Vice-Speaker of the Belarusian Parliament, disappeared on Sept. 16, 1999.

Irina, who is now based in Washington, D.C., co-founded We Remember, a civil initiative that disseminates information about politically motivated disappearances of Belarusian citizens and informs the world community about the situation. A memorial reception organized by Irina Krasovskya follows the Sept. 16 premiere.

Since its founding in 2005 in Europe’s last surviving dictatorship, Belarus Free Theatre has been giving memorable performances in apartments, bars, and other private locations, alerting audiences to the location of performances and time — often the middle of the day — through text messages and e-mail.

The husband-and-wife team of Nikolai Khalezin and Natalya Koliada and director Vladimir Scherban created the company as a means to resist government censorship and have garnered praise from around the world for their powerful message and visceral, dynamic aesthetic. “Drama doesn’t come more urgently political than in the work of the Belarus Free Theatre,” noted The Times.

Renowned playwright Tom Stoppard has praised their “marvelous work,” noting that “What I saw in Minsk is much closer to a true theatre, to its sources, to its true objective,” and Nobel Prize-winning playwright Harold Pinter has said, “They’re bringing back the essence meaning of the theatre.”

Described as a love story, “Discover Love” explores the reflections of a woman who finds out her husband has been kidnapped and murdered. Following the initial shock of the tragedy, her thoughts turn to words left unsaid, dreams unrealized. The work intermingles the experience of the widow Irina Krasovskaya with that of similar stories of women from Asia, South America and Latin America.

For “Discover Love” and the troupe’s previous activities, Belarus Free Theatre received the French Republic Human Rights Prize in 2007, marking the first time in the history of the prize that it was awarded to a cultural institution. Collection of materials for the piece took nine years, and the play launched an artistic campaign to support the UN Convention against enforced disappearances in the world.

Both “Generation Jeans” and “Discover Love” are underscored by a soundtrack from DJ Laurel (Lavr Berzhanin) and performed in Russian with subtitles.

On September 2nd, Belarus moved one step closer to building its first nuclear reactor by signing an agreement with Russia’s AtomStroyExport for constructing a nuclear power plant in Astravets, Hrodna region. The launch of the first nuclear plant unit is scheduled for 2016 and the second – for 2018.

For Belarusian President Alyaksandr Lukashenka – who announced building the power plant during his annual visit to the contaminated Chernobyl zone – a domestic nuclear energy source is a “national security” guarantee. Today Belarus uses minimal domestic electric production capacity and is able to provide for only 10 percent of its energy needs.

Approximately 75 percent of its electricity is imported from Russia, a supplier not shy about exploiting the energy dependence of its neighbors turning energy “from a purely economic issue into a political one,” as Lukashenka himself acknowledged.

Diversifying energy supplies to Belarus is indeed an exigent matter. But a nuclear plant built by Russia on a Russian loan, serviced by Russian technicians and fed with Russian fuel might be a very good deal for Russia, but will hardly make Belarus more independent. Moreover, the new nuclear plant would supply only 25 percent of Belarus energy needs and would begin operation in 2016 or later, even according to the most optimistic prognoses. What will happen to the high-level radioactive waste from the power plant is still unclear, but in solving this problem, Belarus would most likely also have to rely on Russia (although currently neither Russia nor Ukraine permit the import of radioactive waste).

Belarusian Ministry of Natural Resources and Environmental Protection has reassured the population that the nuclear power plant would meet international standards on nuclear and radiation safety. However, the track record of Russian power stations is far from comforting. No further proof is needed when one remembers the Chernobyl catastrophe on 1986 – the worst nuclear power plant disaster in history and the only level 7 instance on the International Nuclear Event Scale. An estimated 260 million curies of radiation were released – about 200 times more radiation than was released by the bomb dropped on Hiroshima. Belarus faced 70 percent of the fallout, and twenty-three years later, one fifth of its territory is still radioactively contaminated. Already in 1992, Belarus was spending 20 percent of its budget on Chernobyl-related problems.

Another disturbing example is Mayak, a nuclear fuel reprocessing plant in Chelyabinsk oblast in Russia. Working conditions at Mayak resulted in severe health hazards; by the beginning of the twenty-first century about half a million people in the region have been irradiated in one or more of the incidents.

One need not look far back, however. Just this August, about seventy people were killed in an accident at the Sayano-Shushenskaya hydroelectric station. The consequences would have been much more serious, had the station been a nuclear power plant. Despite significant technological advances, nuclear power remains a dangerous energy source.

In the midst of financial crisis and borrowing left and right, Belarusian government seems oblivious to the costs of the nuclear power plant – up to $12 billion not counting the expenses on a spent fuel storage facility. For comparison, Belarus’ annual budget in 2008 was about $25 billion. The loan to finance the project will probably come from Russia since Belarusian financial system is just as poorly diversified as its energy. Being slow to send the last $500 million installment of its $2 billion loan to Belarus this summer, Moscow is hardly a reliable creditor, and it has never been never squeamish to use the dependency of its smaller neighbors to its own advantage.

The nuclear power station will be built in Astravets, the most beautiful part of the country full of Belarus historical landmarks. The proposed site is just 20 kilometers from the Lithuanian border and 50 kilometers from Vilnius. International law does not allow building nuclear power plants so close to the border without informing and receiving approvals from neighboring countries. However, Lithuania has not been officially notified about the project yet and is concerned about the plans of the Belarusian government no less than the Belarusian citizens.

Opponents of the project point out that Astravets is far from being an ideal location for a nuclear power plant due to its wind rose and seismic instabilities in the area. In 1909, the region experienced an earthquake measuring 7 on the Richter scale. The most recent earthquake occurred in 1999.

Before deciding to spend an exorbitant amount on the nuclear project, the Belarusian government should read the numerous studies that explain why nuclear power is neither environment-friendly nor cost-effective when compared to other carbon-free or low-carbon options, which include wind power, combined-cycle gas power plants, and energy efficiency measures.

In the end, building a nuclear plant will only deepen Belarus’ economic dependence on Russia and will not contribute to the country’s wasteful level of energy consumption. Most importantly, in the absence of independent environmental expertise and very limited access of media and public to the project, the Russian-built station might be very dangerous to Belarus and its EU neighbors.