Will Child Labour and ‘Tax on the Unemployed’ Help Lukashenka Avoid Economic Reforms?

This November a budget deficit and the lack of a labour force for state enterprises compelled the Belarusian authorities to initiate several controversial laws to help overcome the economic crisis.

The government plans to recruit teenagers to underpaid unskilled jobs and to... 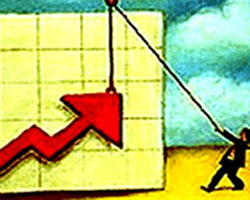 This November a budget deficit and the lack of a labour force for state enterprises compelled the Belarusian authorities to initiate several controversial laws to help overcome the economic crisis.

The government plans to recruit teenagers to underpaid unskilled jobs and to complicate the procedure for their dismissal and hiring which, in turn, will help to strengthen control over the labour force. The 'tax on unemployed' became the most controversial recent project of the Belarusian authorities. The law is to force Belarusians working unofficially and employed abroad to pay taxes.

Those who do not work officially more than 6 month during the year will have to pay USD 280. In addition the tax should force the “unemployed” to get officially employed.

On 8 November Alexander Lukashenka publicly sacked key top officials during his visit to Barysaudreu. To “fix a mess” a working group was sent to verify how things were in areas where industrial enterprises are established. Very soon Barusaudreu announced three subsequent Saturdays to be 'Subbotnik' obligatory for all employees. 'Subbotnik' remained from Soviet Union and means unpaid work at day off.

In the subsequent week the information about child labour at that enterprise broadcasted in independent media. Teenagers from Barysau schools were forced to clean up the area of Barysaudreu for free. That is not the single case when media reported about child labour. The same was commonplace in the USSR when schoolchildren were forced to work at state agriculture enterprises in autumn when labour shortages became common due to the harvesting season.

Very low salaries at state enterprises for unskilled jobs resulted in reduced numbers in the labour force. The Labour Ministry sees one of the ways of solving the problem in expanding the list of jobs 14-18 year old teenagers can do. According to the chief of social, educational and ideological work of the Labour Ministry Raisa Sidarenka, the ministry can offer teenagers work as tissue cleaners, to produce parts for bicycles and motorcycles, to manufacture souvenirs etc.

Belarusian officials have stated that teenagers must work despite their young age. For instance, the Minister of Education Siarhey Maskevich believes that it is preferable that the free time of young people should spent working.   On 18 January 2013 the government adopted the resolution which provides for reopening of 'labour and recreation' summer camps for children to let teenagers work during summer holidays.

In the camp children will have an opportunity for both: to relax and to work. Such camps previously functioned during Soviet times. It is important to add that recreation camps can host only children under the age of 15.

At the time of his visit to Keramin, a ceramic factory, on 12 November Aleksandr Lukashenka demanded the re-introduction of character letters. The document shall be issued at the previous workplace and should be presented while getting hired somewhere.  This practise was in use in the Soviet Union and allowed managers to recommend the worker for the next workplace and, thereby, to influence the future career of an employee.

In addition, the president ordered them to extend the contract system in all enterprises. According to independent labour union leader Henady Fedynich, today around 95% of workers in Belarus are employed under conditions based on the contract system. He claims that the purpose of character letters is to intimidate workers.

Tax on the unemployed

Perhaps the recently announced 'tax on the unemployed' announced that is the most controversial recent project of Belarusian authorities. Officials plans to launch the tax on 1 January 2015. Those Belarusians who are not officially working for more than 6 month during the year will have to pay the government $280 annually.

Vice-Minister of Labour Piotr Hrushnik declared that 445 thousand Belarusians do not work and make no contribution to the economy. Officials claim that all these people enjoy such social benefits as free health care, communal services, public transport and for that reason have to pay taxes.

By introducing the tax, the government expects that the budget will receive $43 million. Also the tax would force the “unemployed” to become officially employed.

According to Canadian financial expert Evheny Olkhovsky, the intention to introduce this tax proves that Belarus, unlike European Union countries, chose its own way to overcome the crisis. While Greece, Spain and Italy, on the recommendation of IMF and World Bank, drastically reduce expenses, Belarus aims to replenish the budget without cutting social benefits but increasing its revenues.

The project provoked discussion in the independent media. Lots of independent experts remain very sceptical about the project. The founder and an expert council member of the state project '100 ideas for Belarus' Siarhey Latyshau claims that the tax can provoke Belarusian citizens working abroad to change their nationality.  The mechanism of how the government will force those people who do not have official income to pay the tax remains unknown.

For a long time many experts have proclaimed the necessity of economic reform in Belarus. But everything suggests that Belarusian political elite today seem incapable of initiating real reform for the economy.

Understanding that reforms mean the transformation of the whole management system of state enterprises, unpopular economic measures and liberalisation, the authorities strive to preserve the status quo. The controversial laws aim to help the Belarusian economy to stay afloat during hard times.

It remains to be seen whether teenagers working at factories, character letters and  tax on the unemployed will be able to save the 'Belarusian economic miracle'.

This November showed the need for foreign capital in the Belarusian economy is becoming more and more acute.

By the end of October the international reserves of Belarus decreased by $575m and amounted to $6.813bn. This number is much lower than the $8,500 predicted by the authorities in the beginning of 2013 and makes the problem of attracting capital all the more severe.

At the same time likely changes in the regulation of individual entrepreneurship will create additional pressure on the sector and may negatively impact the business environment of the country. Finally, opposed evaluations of the economic situation exist within the country.

While authorities officially tend to have an optimistic assessment of the situation, the banking and real sector show a rather uncertain attitude.

Belarus is peculiar in its ability to attract foreign capital at a rather steady level throughout the years (Graph 1). However, this capital mostly comes in the form of reinvested earnings and not sources obtained because of privatisation.

Therefore, the State Property Committee created a list of 80 open joint-stock companies, the selling of which will bring around USD 4.5bn into the state budget.  For their part, the EurAzEC Anti-Crisis Fund is evaluating the readiness of the Belarusian economy for massive privatisation. This evaluation will impact the decision to be made by the Fund on whether or not to provide the 6th tranche of a EurAzEC loan at amount of USD 440m.

Another sign of possible revitalisation of the privatisation process and the readiness of authorities to get rid of state property is the administrative transfer of state enterprises from privately owned telecom operator OJSC “Velcom” to OJSC “MTS”, which the state controls 50% of its shares. The reason for this transfer from state to private hands is still unclear. However, it could potentially help the state to sell its shares in “MTS”, which the authorities have been trying to do over the last 4 years.

Until now the main problem consisted in finding a compromise on the price. Belarus planned to get around USD 1bn from that sale. However, the maximum price from investor offered was around USD 600-700m, and this occurred before the crisis hit the Belarusian economy in 2011.

This action will likely have a positive impact on the successful sale of the state's shares. The transfer of state enterprises from one telecom to another will increase the client base of the state asset in the latter. Moreover, the corporate segment of a client base always brings in a large portion of a companies’ revenue. The increase of this segment will raise the estimated real value of the company and help Belarus sell it for the maximum possible price.

Nervousness in the entrepreneurial sector

The forthcoming highly likely implementation of new technical regulations, that oblige entrepreneurs to certify light industry produced goods, is an issue of great concern for individual entrepreneurs due to the fact that this novelty will negatively impact business performance as a result of the expensiveness and length of the procedure to receive certification.

These regulations will possibly come into force by 1 January 2014. Thereafter entrepreneurs will have either to provide the required documentation, which is unlikely, or go through certification procedure, which will bring additional costs for them to do business.

It should be mentioned that during the meeting of subcommittees of Eurasian Economic Commission in August 2013 it became clear that these technical regulations apply only to importers and producers, and not entrepreneurs involved in retail trade. However, it looks like the authorities unreasonably expanded the scope of appliance of technical regulations all on their own.

As a result, entrepreneurs reacted to this situation in the form of a declaration of their unwillingness to work under these circumstances, an action, that if it were to be carried out, is very undesirable for the weak economy.

Ambiguous perception of the economic situation

At the end of October the Ministry of Economy repeatedly revised its estimations of GDP growth towards a more and more optimistic scenario and changed the number from 2.4 to 3.3 percent.  The officials explained that these changes occurred due to adjustments in foreign trade and an expectation to end up with a surplus in the country's trade balance.

They relied on additional sales of potash, coupled with the growth of exports of meat and automobile industries. These optimistic expectations regarding the exports of potash fertilisers raise certain concerns because of the ongoing conflict with Uralkali and the decreased price of potash on the world market.

On the other hand, very different views on the situation are present in the banking and real sector. In the beginning of November the last state bank stopped issuing loans for purchasing housing. Thus, there is only one commercial bank left in the market and it provides loans with 55% interest rates. Uncertainty in the market appears to be the main reason for suspending lending, and forces banks to hold out until interest rates become stable.

This indicates that the current tendencies remain unsatisfactory for the banking sector and raises concern regarding the latest developments. As for the real sector, the results of the latest monitoring of enterprises, conducted by the National Bank, showed that the enterprises evaluate their economic situation as more pessimistic when compared with similar evaluations a year ago.

According to the survey, the real sector deteriorated due to lending conditions and the volatility of the currency exchange rate explain such a negative trend. Nearly all respondents expect a significant slowdown in the growth of the physical volume of production due to uncertain economic situation.