Apparently, the IMF mission to Belarus was satisfied with the efforts the country is making to tackle its worst economic crises since early 1990-s. The fund agreed to extend the second tranche of the financial aid package for Belarus: 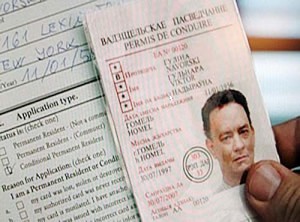 Iryna Khalip is Honored with Courage in Journalism Award

The Washington-based International Women’s Media Foundation awarded a 2009 Courage in Journalism Award to Iryna Khalip, a Belarusian journalist who is frequently detained and subjected to all-night interrogations by police.

You are invited to attend a presentation by Jaroslav Romanchuk, a leading market-oriented Belarusian economist.  The presentation is organized by the Baltic Black Sea Initiative (BBSI). Mr. Romanchuk is the Founder and President of the Minsk-based Research Mises Center, Vice President of the United Civic Party, and the Executive Director of the independent think tank Analytical Center “Strategy.” He has authored over 1,000 articles and co-authored numerous books on market-based economics and democratic governance, including a handbook that offers an alternative path of Belarusian development with free-market solutions in monetary, taxation, budgetary, social security and privatization issues.

Irina Krasovskaya and David Kramer published a piece in Foreign Policy on the European Union’s recent overtures to Belarus.

The United States chargé d’affaires in Belarus Jonathan Moore recently gave an interview to Charter97. Below is the full text of the interview: - Mr. Moore, an alarming tendency has appeared recently: some European politicians openly flirt with the dictatorship in Belarus. Despite of the gross violations of human rights, new political prisoners in Belarusian prisons, crackdown on peaceful rallies, they speak about some “liberalization” in Belarus. What would the policy of the new US administration be, enticement of dictatorships or support and encouragement of democracy? - Thank you for your question, and I appreciate the opportunity to talk with you today. I would describe the situation in different terms. Over the past year we have seen a variety of developments in Belarus. Some developments have been positive, others have not been. To go back to last August, the release of the last political prisoners was a positive step. We were told that conditions would be much improved for the parliamentary elections. However, those of us who observed those elections and certainly OSCE report which was very comprehensive and professional, now that the election did not turned out as promised. There have been protests which have occurred without any interference by the police. There have been some events that were allowed to occur, such as the congress of the Belarusian Christian Democracy Party, and the Union of Poles; the distribution of Nasha Niva and Narodnaya Volya, and some steps to establish a broader dialogue with civil society. At the same time, and we will be talking about it in the interview, there are some cases that are of concern to us. 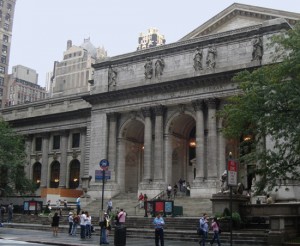 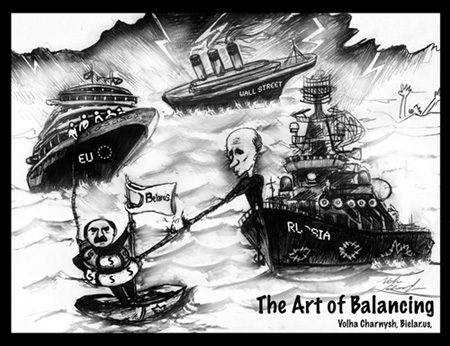 The Art of Balancing – Cartoon by Volha Charnysh

Please join members of the Washingtonian chapter of BAZA at the AU’s International Bazaar, April 8, from 1-3 pm. AU’s cultural clubs and International students will display their cultures out on the quad (main campus of American University). Learn more about other cultures, their music, foods, artifacts and even buy a souvenir!

The 19-year-old Belarusian won the Sony Ericsson Open in Florida earlier this week. Victoria Azarenka claimed the biggest win of her career as she defeated five-time champion and world number one Serena Williams in the Miami final. Here is how Washington Post covered this victory:

Washington – According to Belarusian news agency Belta, the World Bank and Belarus have agreed on a $125 million draft loan for a new energy-effectiveness project.

Alexandra Goujon will give a talk “Does the Political Regime in Belarus Change” on Monday, April 27 at noon at Kennan Institute. Alexandra Goujon is an Assistant Professor of Political Science, University of Bourgogne, Dijon, and Lecturer, Institute for Political Studies, Paris. Here is the event's introduction: