Evgeny Morozov became a Yahoo! Fellow at Georgetown University for 2009-2010. A national of Belarus, Evgeny was a fellow of Open Society Institute in New York before moving to Washington. He publishes and speaks widely on of the...

Evgeny Morozov became a Yahoo! Fellow at Georgetown University for 2009-2010. A national of Belarus, Evgeny was a fellow of Open Society Institute in New York before moving to Washington. He publishes and speaks widely on of the impact of Internet and social media on democracy. He also runs net.effect blog with Foreign Policy magazine.

Evgeny Morozov appeared on CNN, BBC, published in the Economist, New York Times, International Herald Tribune and other periodicals. Below is his recent interview for a blog of Daily Telegraph, a British newspaper.

What Washington and Minsk Have to Talk About 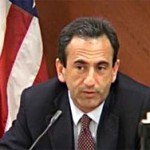 On Friday, Assistant Secretary of State for European and Eurasian Affairs Phillip Gordon listened more than he talked. Perhaps because he was not graced with the presence of the chief Belarusian orator, President Alyaksandr Lukashenka. Most likely, however, because Washington doesn’t have much to talk about until Minsk lifts restrictions on the political opposition, allows independent media and NGOs to develop and takes other measures to improve its human rights record.

Gordon first talked with the representatives of the Belarusian opposition. Alyaksandr Kazulin, Siargei Kaliakin, Anatol Liaukovich, Anatol Liabedzka, Vincuk Viachorka, Viktar Karniaenka, Vital Rymasheuski, Valiancin Stefanovich, and Mihail Pashkevich briefed Gordon on the political situation in the country prior to his meeting with the presidential chief of staff and foreign minister.

According to the Foreign Ministry’s terse account, “The sides discussed the development of Belarus-US relations, in particular taking advantage of the existing opportunities to expand the trade and economic cooperation and interaction in international security sphere.”

According to the US Embassy, “During discussions with Belarusian government officials, he (Gordon) stressed the U.S. desire to continue to engage Belarus in a mutual effort to improve bilateral relations.”

Gordon emphasized that the United States will not lift its sanctions on Belarus in exchange for the enlargement of its staff at the US embassy in Minsk. Sanctions will be lifted if there are actual improvements in political situation in the country, he said.

Gordon remarked that his visit to Belarus was made possible by the improvements like the release of the political prisoners. The Belarusian government needs to put a little more effort to have the sanctions lifted, however. Washington is ready to send an ambassador to Minsk, but it is up to Belarus to make it happen, stressed Gordon.

Read more about Gordon’s visit in The Washington Post.