Belarus to Diversify Away From Russian Oil Supplies 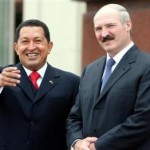 A bit of sensational news came today in the morning: starting May, Belarus will daily buy 80,000 barrels of oil from Venezuela. According to media reports, this number is comparable to the current...

A bit of sensational news came today in the morning: starting May, Belarus will daily buy 80,000 barrels of oil from Venezuela. According to media reports, this number is comparable to the current amount of agreed duty free Russian oil supplies (6.3m tons per year, i.e. 130,000 barrels per day). Before the crisis, annual Russian oil supplies to Belarus were between 20 million and 25 million tons. Own oil production in Belarus is less than 20,000 barrels per day.

The news came just before the visit of Russian PM Vladimir Putin to Belarus. Being on the visit to Venezuela, president Aliaksandr Lukašenka will avoid meeting Putin in Minsk. Obviously, the agreement with Venezuela is a means to demonstrate readiness to at least partly diversify oil supplies if Russia is to cancel or cut duty free oil exports to Belarus. Lukashenka's visit to Venezuela is aimed to strengthen Belarus' position in new negotiations with Russia. Belarus aims to include duty free oil supplies into the conditions of the Russian-Kazakh-Belarusian customs union.

Logistics is a question arising immediately: the oil will have to be transported from Venezuela on oil tankers (80,000 barrels is approximately the size of a small tanker), then pass customs in Lithuania (oil terminals of Klaipėda or Būtingė) or Latvia (Ventspils) and be transported to the Belarusian refineries in Navapolack via pipelines. It is theoretically possible to realize the scheme, but it won't be an easy thing to do. The price of the oil supplied is not reported, but it has to be quite low for the scheme to be profitable for Belarus. A joint Belarusian-Venezuelan oil company is winning approximately 1m tons of oil annually. The oil supplied from Venezuela will be refined in Belarus for the products to be exported to Western Europe. Export of oil products to Western Europe has been a key source of income for the Belarusian state budget in the last decade.

Cheap Russian oil supplies have been the key factor of competitiveness of the Belarusian refineries. Except oil supplies, an other problem for Belarus is selling off production of its tractor and other machine works. Aliaksandr Lukašenka and Hugo Chávez have agreed that Belarus will construct machine building works in Venezuela and create a trading house in order to facilitate sales of Belarusian goods to whole Latin America. Apparently, the only thing president Lukašenka dislikes about Venezuela is that it is located so far from Belarus.

CARACAS (Dow Jones)–Venezuela in May will start selling 80,000 barrels of oil a day to Belarus, the South American nation's president, Hugo Chavez, announced Monday. Venezuela's leader made the announcement following a meeting in Caracas with Belarus President Alexander Lukashenko, who was in town to sign a variety of bilateral accords. In a statement, Chavez said the agreement to supply Belarus with petroleum will be signed "in the coming hours." According to the statement, Lukashenko said the plan is for the two countries to also refine Venezuelan oil together and eventually sell oil products throughout Europe. // WSJ

No Pro-Russian Political Forces in Belarus 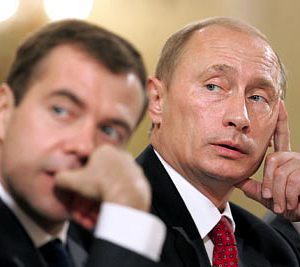 What do you think is the difference between Belarus and Eastern Ukraine? Despite being as much slavophilic, predominantly Russian-speaking and Soviet-nostalgic, the Belarusian society seems to be less pro-Russian then the population of Eastern Ukraine. There are fewer ethnic Russians in Belarus than in Ukraine. Because of president Lukašenka's policy towards Russification and neo-Sovietism, there have been no tensions regarding mass introduction of the national language as in Ukraine. Groups potentially advocating a unification with Russia have never been too active in Belarus.

The question "West or Russia" has never arisen in Belarus as sharply as in Ukraine. Belarusians are pragmatic in this instance, opinion polls show that equal parts of the population support integration with Europe and Russia – with a big proportion of those advocating them both at the same time. For some reasons we have started hearing of pro-Russian organizations in the last months, especially with the scandal around Andrej Hieraščanka (Gerashchenko) a month ago.

Hieraščanka was leader of a pro-Russian organization Russky Dom and a senior official in the administration of Viciebsk Province. He had given an interview for a Russian nationalistic website where he stated that he views "Belarus as an other Russian state and not a separate nation" and accused evil pro-western pro-Catholic powers of wanting to tear Belarus away from mother Russia. After the interview there was a scandal involving an alleged threat to fire Mr. Hieraščanka from his position. Russian pro-Kremlin media wouldn't find a case of discrimination of Russian speakers in Belarus (unfortunately, they don't care about discrimination of Belarusian speakers that is happening in Belarus). But at least a dismissal of a russophile from an official position would give a chance to accuse Lukašenka's regime of being russophobic. Luckily, the scandal has ended peacefully. It seems a specific feature of the region's modern political russophiles: for some mysterious reason they usually get active in a country once it starts having bad relations with Russia. Something tells that we'll see more of their activity in Belarus pretty soon.

Not a single political party in Belarus regardless of whether it supports President Alyaksandr Lukashenka can be described as pro-Russian, an indication of what the political elite in that country feels and what it assumes will attract the support of the Belarusian people, according to a Moscow commentator. Because Lukashenka dominates the political system, neither the government nor the opposition parties play a great role at least at present. But that does not mean that their programs should be ignored because those provide important clues on what the leaders of these groups believe and think other Belarusians want. “Party ideologues,” he points out, “formulate political projects and ideas which reflect the views found among the politically active part of the population of the country” and they “actively promote their views and plans to the voters by means of both the print and electronic mass media.”

Read the blogpost at Window on Eurasia