On 10 January the Ministry of Labour and Social Protection proudly announced that Belarus has reached a historical minimum level of unemployment: 0,5 per cent. The figure looks impressive even compared to the recently improved unemployment indicators in Russia...

On 10 January the Ministry of Labour and Social Protection proudly announced that Belarus has reached a historical minimum level of unemployment: 0,5 per cent. The figure looks impressive even compared to the recently improved unemployment indicators in Russia (5,4 percent) or Kazakhstan (5,3 percent).

Belarusian media started to explain why the figures of the Belarusian government are incorrect. But  HeadHunter Belarus – project of RABOTA.TUT.BY – diminished attractiveness of Belarusian labour market otherwise. According to their research, blue-collar workers in Belarus are in much greater demand than university graduates. They also established that Belarusians earn considerably less than citizens of Russia, Ukraine, and Kazakhstan.

For example, Belarusian accountants averagely earn 2.7 times less than their Russian colleagues. Surprisingly the salary of Belarusian accountants is often even lower than that of Minsk subway cleaners. Despite this parents spend fortunes for covering their children's tuition fees, while the children themselves spend at least five years on the way to a profession which will hardly ensure their prosperity.

Not only accountants' monthly salaries look rather depressive. An average lawyer earns $382 per month, a marketing specialist – $405, while doctors have to work for 10-11 hours to earn their $350.

The trouble comes not only from the generally low salaries in Belarus. It is largely about the low demand for university graduates. More than 77 per cent of Belarusian vacancies are still for blue-collar workers.

Interestingly, from this perspective market economy really works.  The most hated by many Belarusian graduates advertisement which they see in the subway offers cleaners $394 per month – far more than many recent university graduates get.

During the last seven years, the number of students enrolled in vocational training training colleges has decreased by almost 35%. The number of university students is constantly rising. The sad reality is coming to the minds of young people gradually after enrolment at university. As the joke goes would you say to graduates of philological faculty? – One Big Mac and Cola, please”. The older Belarusian students become, the less funny they find the jokes about their future career at McDonalds.

There are exceptions of course. For example, the prospects of IT-specialists look rather promising. Impressive popularity of programming faculties and courses accompanies growing demand for programmers, as well as increase in their salaries. Regrettably, not everyone in Belarus has the the right mind-set to do IT work.

Still the algorithm “kindergarten-school-university” governs the minds of young Belarusians and their parents. Universities promise a beaming life success, while entering a vocational school equals to joining the army of untouchable.

The status of a school graduate who decided to have a year gap in education is even worse. If a young man does not enter a university or another educational establishment after school he will have to follow an even more unwanted scenario: a two-year military service.

This does not leave much rule for thinking to a 17 or 18 year old person who may still hesitate about career choices. As a result, this question arises sharply in five years when it is already a time to work. When university graduates suddenly realise that they can get the profession of their dream at a vocational training school only.

Despite a large number of university graduates and their unfavourable employment situation, according to the Belarusian Ministry of Labour and Social Protection unemployment rate in Belarus manages to be just 0.5 per cent. For Belarus it is not sudden and unexpected – last year the official unemployment rate was merely 0.6 per cent.

A good deal of bright graduates leave for Russia, less often – for Europe and North America. Qualified blue-collar workers, especially young men, also find this opportunity rather attractive. In any case the main reason is the salary. If a Belarusian builder in Mahileu region earns about $400, just across the border in Smolensk region it would be $1,200 per month.

Foreign investors remain cautious about Belarus and the state-run economy cannot produce enough jobs with decent salaries. The economy badly needs modernisation which is difficult to achieve without significant foreign investments and a serious commitment to reforms.

Those who stay in Belarus have two options. First, they may quit their recently acquired prestigious profession  and go to something more simple to earn better money. Second, they may decide to keep to their prosperous image and hopes for success. From time to time, ambitious hopes come true. The popularity of the first option is striking. Hearing from your shop assistant that he is an economist, or from a masseur that she is an engineer is unlikely to surprise a Belarusian. It has already become a part of reality.
But even this system can hardly ensure 95.5 per cent employment of population. Belarusian statistics’ trick of counting only those who officially register as unemployed helps.
Low Competition for Employment

Even if the unemployment was indeed so low, it is not a reason to be excited. The above-mentioned research of HeadHunter Belarus suggests that competition for employment is considerably less than in Russia, Ukraine, or Kazakhstan. It makes less than three people for a vacancy and in average each vacancy got only 14 replies from candidates.

The figures can look positive and imply that all Belarusians have already found their dream jobs. However, they lead to other conclusions as well. The main of them is that Belarusian labour market is only slightly familiar with competition for employment. That means employees are not engaged at constant improvement of their skills. They will get a job anyway. At the same, those who are ready to improve their skills and qualifications find leaving, for example, for Russia much more attractive.

Why do people agree to be paid so little? One explanation is that they follow a famous Soviet employees’ wisdom: “We pretend working and you pretend paying.” Perhaps, it is high time to burn the proverb together with the load of harmful stereotypes. Otherwise, the country may end in the same unfortunate way as its predecessor, the Soviet Union.

Lessons from the 2011 Belarusian Devaluation 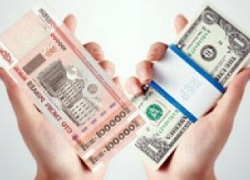 Belarusians in their modern history saw two major economic crises. The first followed the collapse of the Soviet Union in early 1990s and the second was in 2011 when many thought the Belarusian economy would crumble. The 2011 currency crisis and inflation dramatically changed well-being of Belarusians. Consumer prices went up 108 percent within a few months.

Although the effects of 1990s devaluation have been properly examined in the literature, the effect of the 2011 deserves more attention. A recent study of Kateryna Bornukova of the Belarusian Research and Outreach Cente 'The Impact of the 2011 Devaluation on Real Income of Belarusians' fills this gap.

The paper shows that a fall in income and spending of all social groups in Belarus rapidly decreased the level of well-being of the Belarusian society. The state tried to cushion the crisis effects but their policies had a very limited effect.

Mechanism of index of prices appeared to protect the poorest social groups in Belarus from the currency crisis effects. However, the group of pensioners seemed to be the most harmed by the politics of the state.

Inflation hit the poorest Belarusians harder than most other groups. In the first quarter of the year 2011, the prices went up by 3.9 percent. Inflation of 2011 was very irregular. Prices for some goods increased even three times, whereas for others has not changed at all.

Such asymmetrical reaction of the market was due to the increased prices for the imported goods, which reflected the fall of the Belarusian currency. On the other hand, Belarus has a system of state regulation of prices and the state tried to control the prices of certain goods and public services of social importance.

In order to manage the inflation, the state authorities introduced indexation of the minimal income and minimal pension. In practice, it meant adjustment of the part of income payments by a price index.

Apparently, only the poorest Belarusians saw their real incomes increase in 2011, whereas the most well-off population groups suffered from consumer inflation and rouble depreciation the most. The real incomes of those in the top-10 by the amount of incomes in the first quarter of 2011 had decreased by 30 percent by the end of the fourth quarter. This should be attributed primarily to the social policy pursued by the Belarusian government.

Minimum wages were growing faster than inflation, enabling a growth in real incomes of households with minimum earnings. At the same time the groups with wages well above the minimum prior to the crisis saw their incomes grow only slightly as a result of wage indexing, meaning that their real incomes were falling.

Furthermore, the poorest Belarusians, as a rule, tend to rely on inflation-proof income sources, such as incomes in kind, privileges, welfare assistance and sale of produce more than any other population group.

However, the pensioners became the biggest victims of the crisis: their real incomes fell by 16.7 percent on average. Since their incomes were not high originally, such a decrease is remarkable and put the pensioners in a group of high social risk.

The authorities attempted to soften the results of the crisis for the poorest, in particular those with low-paid jobs. However, it has not opened the protective umbrella over the pensioners.

Due to the crisis, Belarusians were less prone to spend money. In fact, level of spending in 2011 proves the panic atmosphere of crisis within the society.

Compared to 2010, the second quarter of 2011 proves that spending was higher than income due to the panic on the market. Because of the crisis the structure of the spending has also seriously changed. Belarusians needed to spend more money on the food, although their real incomes had decreased.

In the fourth quarter of 2011, the share of spending on food reached level of 35.4 percent, the highest since 2005. To put it into context, in developed countries the share is usually between 15-20 percent.

One of the main consequences of the reduction in real incomes was the increase of poverty. Number of people with incomes below the official minimum subsistence level more than doubled  (from 4.7 to 10.1 percent)  in 2011. At the same time, number of those who claimed that are dissatisfied with their incomes has also substantially increased from 14.75 percent in the first quarter of 2011 to 22.08 percent in the fourth quarter.

The currency crisis has not only decreased the real income of Belarusians, but also played a redistributive role. The paper shows that the crisis actually decreased inequality among the Belarusians, because it seriously hit the richest in Belarus. It affected at most people with high income. Therefore, those who earned more prior to the crisis suffered more from it. In the aftermath, the level of inequality decreased.

This review was prepared on the basis of Policy Brief Impact of Devaluation-2011 on Belarusians’ Living Standards. The study was conducted by Belarus Public Policy Fund as a part of a program jointly carried out by Pontis Foundation (Slovakia) and Belarusian Institute for Strategic Studies.