On these maps, Belarusian names of the stations were transliterated into Belarusian using Latin script, or Lacinka. This transliteration seemed incomprehensible to many people and caused a...

On these maps, Belarusian names of the stations were transliterated into Belarusian using Latin script, or Lacinka. This transliteration seemed incomprehensible to many people and caused a big discussion in media.

For most Belarusians today, Latin script became an attribute of western world. Few of them know that only a century ago it was commonly used along with Cyrillic letters. Yet another group of their more informed country fellows are familiar with Belarusian Lacinka and try to defend its presence in public areas.

In the case of the underground map, one side advocated the comprehensibility of transliteration, while the other defended original national script regardless its practical aspect. While the opponents of Lacinka accuse its advocates of excessive nationalism and impracticability, the advocates argued that the opponents do not know national history and have a complex of superiority of foreigners.

Belarus is hosting world hockey championship in 2014. Belarus authorities attempt to make the environment of Belarus cities more friendly to foreign visitors. This is why they introduced Latin letters on the underground map.

The way the station names were transliterated drew a lot of public attention. Instead of usual transliteration system similar to Russian, authorities decided to use Belarusian Lacinka. The reason for such move remains not clear, but nationally oriented part of the society met this phenomenon with rejoicing, while the rest were quite surprised, and some even angry.

Within a few days, a video appeared on the web, where a foreigner tries to read the names and fails to do so. This fact became the main argument of the opponents of Belarusian Lacinka: it is unintelligible for foreigners.

Their opponents see the problem from the other angle. More “English” type of transliteration can be used when a country has no tradition of Latin script of its own. Belarus had one for centuries, so it can be reasonably used in transliteration of Belarusian language.

They point to the languages of other East European nations, like Czechs, Slovenians, Lithuanians and Latvians, who have similar systems of script with diacritical signs, but do not bother whether a visitor from another country will be able to read their words properly. Therefore, the defenders of English-friendly transliteration seem to have a complex of superiority of the English civilization.

The History of Latin Script in Belarus

Belarus is located on the borderland of two major civilizations, the East and the West, Catholic and Orthodox, no wonder both Cyrillic and Latin scripts developed here abreast since Middle Ages.

Lacinka became the script of the first literary works in Belarusian languages that appeared in 19th century, when a few intellectuals and writers started to promote Belarusain, which was then mostly the language of peasants. Russian Empire rulers considered Latin Script as a threat that could separate “ethnographic groups” such as Belarusians and Ukrainians from the single Russian nation. They formally banned Lacinka, yet Belarusian intellectuals continued to use it in their works. 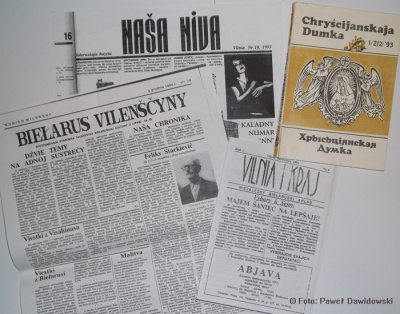 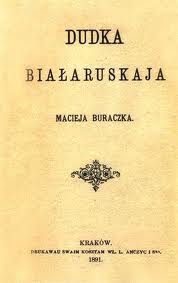 After a number of transformations and reforms, Belarusian Lacinka separated from the Polish alphabet. Diacritical signs stemming from Czech alphabet replaced Polish characters to defend Belarus from Polish influence (for instance, č, š, ž replaced cz,sz, ż). Lithuanians made similar steps, as their writing had also been based on the Polish alphabet.

Belarusians equally used Lacinka and Cyrillic script until the partition of Eastern and Western Belarus between Poland and USSR in 1921. Soviet authorities discouraged the use of Lacinka and soon it disappeared in soviet part of Belarus. In Poland, it continued to exist until USSR annexed Western Belarus after World War II.

The interest in Lacinka reemerged after the collapse of USSR and return to national culture and policy of Belarusianisation. Not surprisingly, Lacinka failed to win immediate mass support – people were simply used to the Cyrillic script. Even among nationally oriented intellectuals, there always were both advocates and opponents of return of Latin script in mass use.

However, Belarusian Lacinka became not only the passion of a bunch of enthusiasts. In 2000, Institute of Language of National Academy of Sciences established it as a base for transliteration of Belarusian proper names in foreign languages.

Hence, it was reasonable to expect that Lacinka would be widely used in state institutions for transliteration matters. However, it did not happen. Belarus authorities continued to transliterate most common case for transliteration, names in the passport and geographical names, following the system used in Russia, rather than the trditional Belarusian Lacinka.

Because of poor use of Lacinka in public matters, it remains unknown to most Belarusians. This lack of knowledge creates the ground for discussions such as the one related to the underground map.

The Future of Latin Script in Belarus

State policy up to now did not favour Belarusian language in general, let alone its Latin script. Lacinka became a symbol of western civilization that Lukashenka and his entourage consider alien. Many Belarusians remain unaware of many facts of their history and culture prior to World War II, the core element of official ideology. But as discussions like the one on tube scheme go on, more and more Belarusians get to know that they have richer legacy than they could imagine.

Nevertheless, the future of Lacinka remain undefined.  Some people advocate its introduction into wider use. They say that Latin script will bring Belarus closer to the West and push Russia away. Others argue that initially people should preserve Belarusian language itself which stands on the verge of extinction, and only thereafter engage in disputes over scripts and other minor details. For some, it remains a matter of pride in glorious past, for others – just a ridiculous thing and even nonsense.

So, the attitude to Lacinka remains the ground for cleavage in Belarus. But Belarusians badly need symbols of unity that can hold their fragile national identity together, rather than differences. This presents a task, which future nation-builders of Belarus will have to face and resolve.

The Belarusian president has always used press conferences in order to keep in touch with his electorate and demonstrate that he is in good political shape and keeps everything under control. Depending on what happens in the country at the time of a press conference he also comments on issues that worry the population most.

Interestingly, during the latest press conference he rather focused on the issues that in the first place worry him. And the most noticeable one was the issue of the presidential powers.

In the authoritarian political system of Belarus Lukashenka’s powers have no checks and balances. And he never doubted to remind about this. However, it begins to look like the majority of the population is turning unsatisfied with the president and his absolute powers.

In spite of a surge in income in real terms (by 20.4% in January-November 2012) the incumbent’s electoral rating remains modest. According to the IISEPS, it stayed at around 30% throughout last year. For Lukashenka this is unacceptably low.

Moreover, the IISEPS survey in December revealed another fact that surely worries the regime. Over 50% of the respondents said that they did not see anything positive in Lukashenka’s excessive powers. Additionally, most of the respondents blame the president for the current economic difficulties.

It is difficult to say whether Lukashenka himself believes these numbers. According to credible sources, his sociologists in the Presidential Administration get more or less the same numbers from their surveys. But the sociologists then go for various methodological tricks in order to please the leader. As a result, the incumbent receives distorted data.

However, judging by Lukashenka’s behaviour, he does feel that his popular support has significantly shrunk. His increased public activities and resonating decisions clearly point to that. It looks like he is trying to restore his previous level of electoral popularity by featuring more in the news and making tough statements. No doubt, the press conference was part of the strategy.

At the same time Lukashenka obviously does not want to compromise his unrestrained hold on power. Even though the Belarusians are growing tired of the political “one man show” and are increasingly dissatisfied with the model of personalistic dictatorship, Lukashenka offers his own original recipe.

In a number of statements during the press conference on 15 January he implied that his powers would grow further. In the situation of multiple socio-economic challenges Lukashenka thinks that only his total control of everything can save the country. He did not go deep into explaining why and simply ended by saying “this is how things will be for now”.

A perfect illustration of the president’s core message at the press conference came in his quote about the independence of the National Bank:

The National Bank exists independently but the president can at any moment request a report from it, make an inquiry into a situation and demand that some other measures be taken in the interest of the state and the people.

In other words, Lukashenka can even envision some formal liberalization. But only on condition that it does not limit his personal powers.

No Money for Social Policies

Another important detail of the press conference was about state paternalism.

Lukashenka has always taken particular pride in all sorts of social benefits and subsidies in the Belarusian “socially-oriented market economy”: in healthcare, housing, education, public transport, etc. According to the Ministry of Labour and Social Protection, in the mid-2000s up to two thirds of the Belarusian citizens qualified for some benefits.

However, in recent years under the financial pressures the authorities have been trimming the social package of the population. In 2007 the Law “On state social benefits, the rights and guarantees of separate categories of people” took away some of the benefits mainly from students, pensioners, handicapped and Chernobyl victims.

For example, this law deprived students and labour veterans of the right for discounted access to public transport. The state stopped covering medical and communications expenses for a large group of people. Even the military and police had their social packages cut.

During the press conference Lukashenka made an obvious hint that state paternalism would continue to shrink. This time he even sounded almost like a libertarian: “we bend and will continue to bend parasites”, “a bulb gives equal amount of light to everyone”, “pay as much as your electricity meter shows and using the same tariff for everyone” or “everyone has to think how to earn his living”.

Lukashenka said that in 2012 the government had spent “BLR 11 or 17 trillion” ($1.25 or 2 billion) to provide all sorts of subsidies. He underlined that it was a huge sum and that the state would gradually depart from this kind of paternalism.

The points that Lukashenka made during the press conference suggest that he realises the socio-political and economic threats to his rule. And he chooses to counteract them by further expanding his presidential powers and preparing the Belarusians for a decline of the social state.

As he also spoke extensively about the need to modernise the economy, we can assume what this modernization will look like.

Exactly like before, the government (not private investors) will choose certain enterprises and offer them state subsidies, credits and tax benefits. As the financial perspective for the next years does not look too promising the money for modernization will be taken from other sectors, including the social sector.

And Lukashenka will preside over this modernization holding all controlling strings in his hands and interfering with different enterprises depending on his mood and intrigues in his closest surrounding.