Some 300 delegates gathered in Minsk for the Sixth Congress of Belarusians of the World. Fond of Ideas explains why business should be socially responsible.

Some 300 delegates gathered in Minsk for the Sixth Congress of Belarusians of the World. Fond of Ideas explains why business should be socially responsible.

New opportunities for environmental education await Belarusians. Among them, BEROC invites young Belarusians to participate in a student’s school on the economy and economic research.

The state-run newspaper “Respublika” published a list of extremist publications and events that endanger the Belarusian state.

Belarusian expatriates holding congress in Minsk. Some 300 delegates gathered in Minsk for the Sixth Congress of Belarusians of the World that held on July 23-24, in Minsk. Organised by the Batskaushchyna World Association of Belarusians, the event was attended by expatriates living in 20 countries. The Congress focused on the state of the Belarusian people amid globalisation. Elena Makouskaya re-elected head of the organisation.

New concept paper on transportation. Belarusian Union of Transport (BUT) made the first practical steps towards the formation of the modern Belarusian legislation in the area of transportation. The BUT experts have prepared a concept paper on the development of an integrated mobility based on the harmonization of the legislation of Belarus and the European Union. This paper is the result of a cooperation between BUT and the Office for a Democratic Belarus (ODB) and, later on, with the Office of the European Expertise and Communications.

34mag launches “Bicycle” project. An interactive map for cyclists for all of Belarus answers questions such as where it’s possible to rent a bike, repair it, etc. The project aims to collect all bicycle related spots in one place and thus to make Belarus a truly bike-friendly country. “Bicycle” is an interactive map, so it provides the ability to add valuable points to all users.

Infographic from AMPby. Alternative Youth Platform has developed an infographic called “Belarusian youth in numbers” dedicated to Youth Day, which is celebrated annually on 30 June. In particular, about 2,300,000 Belarusians are in the age range of 14-31; 2,829 long-distance trains are needed if all the young people want to leave Belarus; 11,455 isolsation rooms in the detention faciility Akrestino are needed to put all youth to prison.

Let’s Make it Better! On 16 July representatives of 15 NGOs from Minsk, Gomel, Vitebsk, and other cities came together in Minsk to discuss ideas they want to implement within the “Let’s Make it Better!” campaign aimed to increase the role and impact of social activities in Belarus. The campaign’s initiator is the Executive Bureau of the Assembly of NGOs. The majority of the local campaigns of the Let’s “Make it Better!” campaign are to be held in August-September 2013.

Belarusian poems in trolleybuses. Belarusian poems have been placed in 90 trolleys in Mogilev. The project will last until the end of the year, while Mogilev has the status of the cultural capital of Belarus and the CIS. The organisers managed to implement the project which was one of the winners of the project fair, held by the campaign “Budzma!” and Mogilev city executive committee.

BEROC Student School. Belarusian Economic Research and Education Center (BEROC) in co-operation with the British Embassy in Belarus calls for students to participate in the 3rd Student School on a modern economy and economic research. The School will be held in Minsk on Saturdays, from 14 September 14 to 21 December 2013. The working language is English; participation is free.

Trainings on eco-tourism strategic planning. On 23-31 July the USAID LEED Project implemented by UNDP conducts four training sessions to improve the skills of local partners. These partners are located in the seventeen tourism destinations within Hrodna and Brest regions (representatives of community-based organizations, local authorities, and business) and will focus on the development of ecotourism strategies.

School of Environmental Activism. On 8-14 July the second stage of the School of Environmental Activism took place in the Astravets district of the Hrodna region. The participants learned about environmental initiatives in Belarus, listened to foreign experts, took part in workshops. The School is being implemented by the Green Alliance and designed to prepare people ready for action and self-organisation, able to fight for the preservation of wetlands and parks, and to promote environmentally friendly lifestyle.

GEF Small Grants Programme invites civil society organisations to take part in the project “Strengthening environmental governance through the development of non-governmental organisations.” The project is aimed at promoting sustainable development and improving the environment on the basis of more effective CSO participation in environmental governance. The maximum project amount shall not exceed 50,000 USD. Application deadline is 11 August 2013.

Official blacklist. Belarusian state-run newspaper “Respublika” published an updated “National list of extremist materials” which contains “Belarus Press Photo 2011” album and a number of CDs, books and publications, for example, the documentary “A Lesson in the Belarusian language” and the concert “Solidarity with Belarus” in Warsaw (2006).

Cancelled sealing house in Uruchcha to be built. Minsk City Council reversed its previous decision that it made last year to cancel the construction of one of the houses on Shugaeva street in the Minsk district of Uruchcha. The initiative “European Perspective” is trying to look into the situation and help citizens to protect their rights. Meanwhile the locals recorded a video appeal to Lukashenka.

Belarus remains one of the leaders among post-communist countries when it comes to the abortion rate. In 2012, nearly 27 thousand pregnancy terminations took place in Belarus.

Although the authorities restricted the abortion law in 2013, Belarus still remains more liberal than the majority of  Western countries. The present shape of the abortion law in Belarus bears the legacy of Soviet times when ending a pregnancy was widely available and has been practised since 1920s.

Supporters of the liberal abortion law argue that poor socio-economic conditions should justify the decision to end a pregnancy. On the other hand, Catholic and Orthodox churches and Belarusian pro-life movements emphasize the Christian dimension of the abortion and call for respecting traditional values. Apart from the hot ideological discussion over abortion, Belarus today is struggling with demographic problems typical to all European societies and its need to rethink its present social policies.

Present Abortion Law in Belarus: Back to the Soviet Times

According to the World Health Organisation, “Eastern European countries have the highest estimated abortion rates in the world”. The experts, however, underline that a number of abortions there dropped dramatically between 1995 and 2004, probably due to the increased use of contraception.

Many think that abortion remains popular in Belarus because of insufficient knowledge about modern birth control methods. They often advocate education on family planning beginning early in a child’s school years as one of the key issues to protect teenagers against unwanted pregnancy.

Others, with the Christian churches at the forefront, explain the wide use of abortion by the crisis of values in Belarus aftermath the Soviet times.

The roots of today’s high abortion rate go back probably to legislation created during Soviet times. Its authorities legalised abortion on demand back in the 1920s and since then it has been widely practised. Other communist countries took after Moscow and also opened the window for a rather wide use of abortion.

Soviet Belarus implemented its abortion law in 1950s and with minor changes to them, they have remained in force until recently. Before 2013, the law permitted abortion in different ten cases.  For example, divorce during the time of a pregnancy or the imprisonment of a husband now are no longer give a woman a right to have an abortion.

Today the new law permits abortion only up until the 22nd week at the latest if pregnancy is a result of rape or a woman lost parental rights. Due to the social conditions, a woman can decide on abortion until 12th week. Latvia allows abortion on request only within the first twelve weeks of pregnancy. Lithuanian law also permits women to have an abortion until the twelfth week of pregnancy.  In Ukraine, women can end pregnancy until the 12th week but in some cases also they are permitted to end a pregnancy up until the 22nd week. Both Ukraine and Lithuania are now considering placing further restrictions into their abortion laws. Poland has banned abortion in the 1990s. Now Poles cannot legally terminate pregnancy except in three situations: when the health or life of a woman is at stake, if there is a malformed fetus or when the pregnancy is a result of a criminal act.

A scale of abortion in Belarus 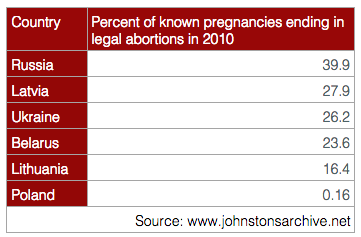 The Belarusian Ministry of Health reported that nearly 27 thousand abortions in 2011. When comparing 2010 and 2009 the number is steadily dropping.

The chart to the right presents the percentage of aborted pregnancies in 2010 in Belarus and neighbouring countries. However, many illegal incidents take place in so called “underground abortions”, particularly in countries with stricter laws. They remain under-reported and thus certainly decrease the overall numbers.

More and more Belarusian women, as in the Western Europe, consciously plan when to start the family. Certainly, each case is individual, but often they have one shared factor: economic circumstances. In the majority of cases, women wish to have children, but first they want to achieve financial stability.

In November 2012 the Catholic and Orthodox churches have jointly appealed to the Belarusian authorities for restriction of the abortion law. The Christian churches agree that abortion goes too far in Belarus.

The Churches support the pro-life movement in Belarus. Apparently, their campaigning forced the authorities to seriously re-consider amendments to the abortion law. One initiative, called ‘Pro-life Belarus’, aims to promote values such as family and the protection of life. It is a social movement that acts in close cooperation with the Orthodox Church.

Another organisation, Open Hearts Foundation works in Mahiliou, mostly with the Catholic Church. Both engage themselves into organising lectures, seminars and supportive meetings. They offer also free counselling on maternity- and pregnancy- related issues for women throughout Belarus.

Abortion and the Demographic Reality

A high abortion rate, together with a low birth and death rates all matter when it comes to demographic problems in Belarus. Like many other European countries, Belarus is also struggling with a decline in population. In the data revealed by the National Statistics Committee, the birth rate in 2013 reached a level of 11.9 per 1,000 population. On the contrary, a death rate is estimated at 14.2 per 1,000 population.

Not surprisingly, Belarusian authorities want to reverse this trend. On 17 June First Deputy of Presidential Administration, Aliaksandr Radzkou, called to make large families fashionable in Belarus. Alexandr Lukashenka also likes to talk about reversing the negative demographic trends in Belarus. But despite the talk and attempts to reverse the situation, Belarusians are getting married less and the number of divorces has increased over the last years.

A better way would be to implement a set of consistent policies encouraging both men and women to be able to “afford” having children. State benefits for families with children or support for housing might work in Belarus. However, increasing the economic difficulties taking hold in Belarus may make implementation of these plans more difficult.

Of course, changes in the abortion law will not resolve Belarus’s demographic problems. Belarusians should have more forums to discuss issues of abortion, contraception and family planning. For now, the Internet remains the only place to do so.

Paula Borowska
Paula Borowska is currently completing a PhD on religion and social capital at University College London. She holds a Master of Arts degree in Interdisciplinary Research and Studies on Eastern Europe from the University of Bologna.
all articles » Follow @
abortion abortion law in Belarus Catholic Church demography in Belarus Orthodox Church pro-life in Belarus