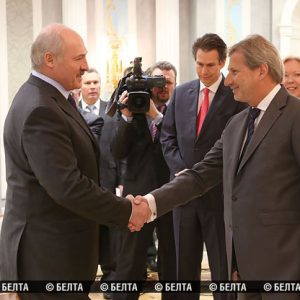 Johannes Hahn, the EU "Neighbourhood" Commissioner has become one more senior EU official to visit Belarus in recent months. The last time his predecessor, Štefan Füle, came to Minsk was back in 2010.

On the Asian front, Belarus has managed to take into account the strained web of relations between the region's superpowers – China, India and Pakistan. Officials in Minsk work on the next month's "milestone" visit of China's president to Minsk.

Belarus and China have been earnestly working on organising the forthcoming visit of Chinese President Xi Jinping to Belarus. At a special meeting with senior government officials in April, Belarus' President Alexander Lukashenka labelled the visit, scheduled on 10-12 May, as "unprecedented".

Belarus and China both view their relations in terms of being a comprehensive strategic partnership. According to Wang Yi, the two countries have only one issue before them, "to turn the high level of political relations into more tangible and substantial results in terms of cooperation".

Both parties have agreed to join efforts in promoting Xi Jinping's "Silk Road Economic Belt" initiative. They feel that Belarus is an important element of this project, one that has the China – Belarus industrial park "Great Stone" as its linchpin.

China insists that the Silk Road Economic Belt will play only a complementary role to the various Russian-led Eurasian integration projects underway. However, some experts see the initiative as a competitive project and an attempt to establish China as an alternative pole of influence for Russia's neighbours.

Maintaining A Delicate Balance in Relations with Asian Nations

The Belarusian delegation also met with executives from several Indian companies and discussed military and technical cooperation in the defence ministry.

Both countries have a sound mutual understanding with regards to international matters, in particular, on human trafficking. Meanwhile, bilateral trade is presently sitting at around only $400m annually. Belarus is India's second largest supplier of potash fertiliser and India is a key supplier of pharmaceuticals for Belarus.

Belarus seeks to enter the Indian market with its agricultural machinery and lorries. This is an ambitious endeavour as India has a highly bureaucratic and corrupt purchasing process for important contracts. Beyond this, India has highly prohibitive tariffs for imports that aim at stimulating local manufacturing and transfer of technology.

Makei's visit to New Delhi also served as a counterbalance to expanding relations between Belarus and India's biggest rival, China. In the same vein, Deputy Foreign Minister Valentin Rybakov's visit to Islamabad on 1–3 April sought to maintain some balance for another regional rivalry, between India and Pakistan. Rybakov led a large delegation of Belarusian officials and manufacturers who conducted negotiations in many areas with a focus on trade, investment and military cooperation.

Emphasising Relations with the Middle East

The first half of April witnessed an intensive push for greater contact between Belarus and several Middle Eastern nations. Valentin Rybakov visited Qatar and the United Arab Emirates. In Doha on 12–14 April, the deputy foreign minister opened a Belarusian embassy, held talks with his Qatari counterpart and met with Prime Minister Al Thani. On 15 April in Abu Dhabi and Dubai, Valentin Rybakov held the first round of political consultations between Belarus and the UAE and met with the Emirates' minister of economy.

Qatar and the UAE, two of the richest countries in the region, have of late become Belarus' preferred partners in the region. The foreign ministry is overextending itself to implement Lukashenka's ambitious plans, especially those formulated during his recent "breakthrough" visit to the Emirates.

On 2 April, Belarus and Syria held a meeting of the bilateral commission for trade and economic relations in Minsk. The Syrian delegation led by the ministry of industry also met with Deputy Prime Minister Mikhail Rusy and visited a number of Belarusian companies.

On 8–11 April, the first-ever official visit of an Iraqi foreign minister to Belarus took place. Ibrahim Al Jaafari met with his Belarusian counterpart and held talks with the Belarusian ministries of health, education and industry as well as the Belarusian parliament. This visit reaffirmed the ongoing renaissance of the bilateral ties that was initiated by Vladimir Makei's trip to Baghdad last August.

Alexander Lukashenka received Ibrahim Al Jaafari on 9 April. At the meeting, the Belarusian ruler identified two areas of cooperation, which should serve as a basis for a new level of relations – trade and military cooperation. He also stressed the potential for providing academic exchanges for Iraqi students in Belarus. However, despite these stated priorities, the two countries have thus far only signed a memorandum on cooperation between the sports ministries.

On 16–17 April, Johannes Hahn, the EU Commissioner for European Neighbourhood Policy and Enlargement Negotiations, paid his first visit to Minsk. He held talks with Alexander Lukashenka and Vladimir Makei but also met with Belarusian opposition activists.

The parties focused their discussion on reforming the Eastern Partnership in the context of its forthcoming Riga summit. "We would like to see [the Eastern partnership] reformatted from its typical take on politics… to closer cooperation in specific areas based on solving economic problems", Alexander Lukashenka stressed.

The Belarusian leader pointed to the transfer of technology, trade, regional security and suppression of cross-border crime, such as illegal traffic in drugs and nuclear materials, as priority areas of cooperation between Belarus and the EU.

While Johannes Hahn's visit was the key event of Belarus' interaction with Europe in recent weeks, several other encounters have complemented the growing web of ties. On the days of Hahn's visit, Belarus hosted senior diplomats from the Weimar Triangle (France, Germany and Poland) and the Visegrad Four (Hungary, Poland, Slovakia and the Czech Republic). The foreign ministry also held consultations with Estonia, Lithuania, Romania and Slovakia. 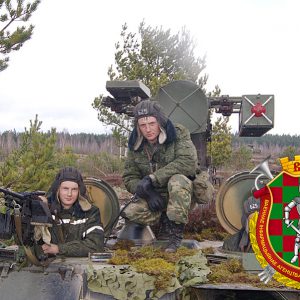 The Belarusian authorities are concerned about Belarusians fighting in Ukraine. Belarus and Poland have been expanding cooperation of rescue departments. Belarusian peacekeepers are ready to participate in UN missions. Belarus's territorial defence has not been definitely shelved yet.

Export of extremism concerns the Belarusian authorities. Money for Belarusian law-enforcement bodies in 2015 will be scarce.

Minsk strives to remain equidistant between both sides in the war, and therefore participation of its citizens in the conflict may result in undesirable claims of political or ideological nature from Kyiv or Moscow. Second, there are fears that combatants with combat experience and serious ideological motivation may participate in activities aimed at destabilising the domestic political situation.

The Belarusian authorities obviously see the threat of an externally provoked destabilisation as real. They get ready to respond harshly to any attempts of active protest. At the same time, they categorically deny the fact that they have been creating the ground for shocks through their own policy miscalculations.

The participants practised interaction between territorial defence troops and units of the Interior Ministry, the Ministry of Emergency Situations, the State Security Committee, the Investigative Committee, and the State Border Committee in maintaining order. They focused on protecting sites, mitigating the aftermath of terrorist attacks, accidents, self-inflicted and natural disasters, etc. Local officials and military commissioners of the region's towns and districts participated in the event.

On 5 March, the training involved staffers of the command structures of the territorial defence and law-enforcement bodies of the Vitsiebsk region. They drilled interagency interaction and training of territorial defence troops. On 23-27 March, a planned joint staff exercise of the unified command of the regional grouping of Belarus and Russia took place. The staff headquarters of the territorial defence zones (i.e., the regions and Minsk) and agencies of the Belarusian state administration participated in the event among other units. The exercise was carried out at the stationary command posts.

The territorial defence training resumed almost immediately after Alexander Lukashenka's statement before the military command on 19 February. The Belarusian leader stressed the importance of creating an efficient system for the territorial defence of Belarus. The Ministry of Defence is playing the leading role in this sphere. This is despite the fact that recently the Belarusian military authorities wanted to shift this responsibility mainly to the local authorities.

Budget Revenues Have Been Falling

Despite the significant operating surplus (4.9% of GDP), there is a tense situation with the execution of the state budget. Because of falling crude oil prices, the budget will lose about $1 bln in oil duties alone. Already the Ministry of Finance announces adjustments to the budget in the first half of the year by reducing its expenditure. It is obvious that the curtailment will affect primarily expenses, which are not related to the social sphere.

Given the lack of resources, the interagency competition to get them becomes more intense. Some siloviki follow tried-and-tested practises: on the eve of the presidential election, some law-enforcement agencies take advantage of the fear factor concerning possible political unrest modelled after the one that took place in Ukraine.

As the opposition's weakness is obvious, the authorities have been actively promoting football fans to the role of the regime's new enemies, while the fan movement is essentially a subculture, which is very fragmented and without a clear political platform. A possibility remains that due to diversification of information sources, the highest political leadership will not drift into a costly and absolutely senseless struggle with windmills.

Police Focuses on Banks and Taxes to Raise Money

Problems with replenishment of the state budget compelled the authorities to revise law-enforcement priorities in the sphere of prevention and suppression of economic crimes. Earlier, the Interior Ministry paid special attention to government procurement, modernisation of state-owned companies and use of public funds.

This year, they have new priorities: the return of foreign exchange earnings to the country and the control over the currency exchange market and financial sector (especially banks). This is due to falling exports and the inflow of foreign exchange earnings into the country against the backdrop of massive foreign debt payments. The second task is to ensure the revenue side of the state budget. In this connection, the struggle against tax evasion is getting tougher.

No Visas for Polish Rescuers

Minsk and Warsaw plan to abolish visas. So far, for rescuers only. The Belarusian-Polish sub-committee on cross-border cooperation met on 13 April. The parties reached agreement that the emergency services of both countries would be able to cross the border without visas in future emergencies. Belarus and Poland are drafting an agreement on cooperation in the prevention of accidents, natural disasters and other emergencies as well as mitigation of their consequences, which will include this provision.

During his meetings with the chiefs of the General Staff of the Armed Forces of Spain and Serbia, Stanislau Zas discussed the prospects for expanding Belarus' participation in the UN military mission in Lebanon.

Today, Belarus can provide a peacekeeping company of 240 servicemen, a military transport aircraft Il-76MD with two flight crews and two teams of ground service personnel, officers to serve in multinational staff headquarters (up to 15 people), a team of medical specialists (up to 7 people) and a mobile hospital.