Belarus-Russia relations Belarusian language Belarusian military travel to Belarus
Why Support Belarus Digest? Donate
BelarusDigest > All > Opposition May Be the Only Party to Represent Belarus in EURONEST PA 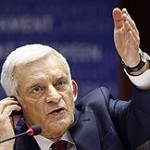 An attempt to influence the Belarusian regime through the Eastern Partnership has failed. At least so far, at least the first attempt of it. Russian newspaper Kommersant reports that...

An attempt to influence the Belarusian regime through the Eastern Partnership has failed. At least so far, at least the first attempt of it. Russian newspaper Kommersant reports that the negotiations between a delegation of the European Parliament and the Belarusian officials on Belarus’ participation in the parliamentary assembly of EU and its Eastern neighbours (EURONEST PA) were unproductive.

It is now likely that the Belarusian delegation will be formed from the opposition parties and NGOs, Kommersant quoted MEP Justas Paleckis.

This means that once again the democratic opposition is likely to represent the country at an international forum. It would be virtually the same as if on such forum during the Cold War the USSR would be represented by the Soviet dissidents. The dissidents were brave and dignified individuals but they were neither politically influential nor representative of the whole country.

Belarus has been under authoritarian rule over 15 years. All these years the opposition has practically been deprived of any opportunities to influence on the government’s policies let alone representation in the parliament. The opposition has now practically transformed into a semi-dissident movement. It is able to give a picture of what is going on in Belarus and give advise to the EU in what policy to pursue with Belarus – but these consultations and even some financial and organizational support to Belarusian NGOs can hardly be considered a realistic policy.

It seems that in order to facilitate real change in the country one has to cooperate with the Belarusian authorities and try to influence them. To be exact, one must communicate with president Lukašenka, who is the primary decision maker in the country. As cynical as it sounds – a form of cooperation with the Belarusian government must be developed where officials would be present regardless of the democratic progress in the country. EURONEST PA should become such place.

Maybe it did not play a significant role at all, as it seems that the political liberalization in Belarus is over anyway, at least till after the presidential elections of 2011, as a political expert quoted by Kommersant said. This sounds very realistic indeed.

Stay off the potash is the title of Edward Lucas’s recent article in the Economist, where he reflects on effectiveness of trade boycotts. Although the piece is on trade boycotts, the same logic applies to economic sanctions in general. As to Belarus, the point is well-taken – the more Europe isolates Belarus, the stronger will be its dependence on undemocratic regimes such as Russia or China:

Penalising weak-kneed European countries is hard enough. It is even more difficult when trying to put pressure on the source of the problem. If you want to boycott Belarussian goods, say, because of that government’s persecution of its Polish minority, you are unlikely to change your lifestyle much, unless you use industrial quantities of potash or need a lot of cheap tractors.

For countries like Belarus, a trade boycott is outright counterproductive. The more Belarus trades with the rich industrialised world, the weaker will become the ties binding it to Russia. It may be reasonable to try to take custom away from companies that owe their existence to commercial ties with sleazy politicians. But such bodies tend not to sell anything that a normal consumer in the outside world is likely to buy directly. You may not like the fact that some pennies from your fuel bills eventually trickle into the coffers of Kremlin cronies, but there is not much you can do about it.

Indeed, there were good reasons for the European Union to introduce economic sanctions, but their effectiveness remains questionable. Belarus has not become more democratic, despite some promising rhetoric of its government and strained relations with Russia.

This suggests that different approaches are needed. Spreading uncensored information in Belarus and supporting Western-educated Belarusians to return home are likely to be the most effective.

The first method is easy, but has yet been taken seriously only by Poland. Democratic transformation in Belarus depends on public opinion, which is formed almost exclusively by television. Although internet and printed press are important, their role is marginal because only a small fraction of Belarus population uses internet or newspapers to for political information.

Other than treatment of Union of Poles of Belarus, Belsat is the most important single reason for Belarus authorities strained relations with Poland. It is the only independent Belarusian television channel headquartered, which is headquartered and primarily funded by this country. The increased FM radio and television broadcasting from the neighboring countries is likely to break the information blockade of Belarus population. Once the majority of population gains relatively easy access to uncensored information, the political landscape of Belarus will change dramatically.

The other approach requires more creativity. The European Union, United States and other countries spend significant amounts to educate and expose Belarusian youth to democratic values abroad. The theory is that once exposed, they will go back to Belarus and do good there. But in reality, foreign-educated youth cannot find its place in today’s Belarus. Few employers in Belarus state-dominated economy value foreign language skills or western know-hows. The real unemployment is high and the salaries are ridiculously low. As a result, those Western-educated Belarusians who did not stay in the West, find themselves working in Moscow.

Instead of promoting export of Belarusian youth to the West and Russia, Belarus supporters should think of helping them return home. Surviving in Belarus for a year or two would cost a small fraction of the monies spent on education abroad. There is little doubt that supporting research, pro-bono work or teaching fellow Belarusians will be more effective than imposing boycotts or trade sanctions upon them.

Read “Stay off the potash” at Economist.com.
Read “The Achilles’ Heel of Autocracies: The Role of Media in Transition to Democracy” in Willamette Law Review.