Over the past few weeks, Belarusian diplomats have concentrated their trade promotion... 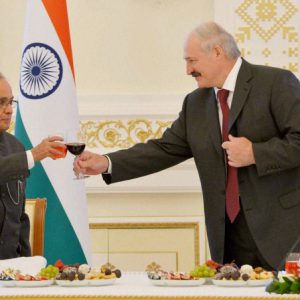 Presidents of India and Belarus

Over the past few weeks, Belarusian diplomats have concentrated their trade promotion efforts on Asian, African and MENA countries. However, in most of these cases prospects for a major breakthroughs are rather grim with few serious projects to back up their diplomatic activities.

Belarus' European agenda continues to be heavily loaded with meetings and consultations at the highest working level. In June, the agenda's emphasis shifted to consultations between Belarus and several European institutions, focusing mainly on preparations for the forthcoming presidential election in Belarus and engagement on potential post-election cooperation.

Over recent weeks, Minsk became a pilgrimage destination for emissaries from many European institutions. On 8 June, deputy foreign minister Alena Kupchyna met with members of the Working Party on Eastern Europe and Central Asia of the EU Council (COEST). On 18 June, she received a delegation from the European parliament and on 1 July, the Vice-President of the OSCE Parliamentary Assembly.

While Belarusian officials claimed that a wide range of issues were discussed at these meetings, they all clearly had one issue in mind, the forthcoming presidential election in Belarus and the role of European institutions in monitoring said election. Alexander Lukashenka, confident in the results of this October 'exercise' and reassured by Europe's more congenial attitude towards Belarus, has regularly invited international organisations to send their observers to Belarus.

Belarusian officials meetings with their OSCE counterparts were so important for Belarusian diplomats that they virtually disregarded a meeting of the Central European Initiative foreign ministers in Macedonia on 15 June, sending only the Belarusian ambassador to Serbia.

Recently, Minsk hosted another European event, not directly related to its bilateral relations with Europe. On 29 June, top-level diplomats from six Eastern Partnership countries and several senior EU officials, including Johannes Hahn, the Commissioner for European Neighbourhood Policy & Enlargement Negotiations, met for the fifth round of informal ministerial dialogue with EaP countries.

The foreign ministers of Belarus, Georgia and Armenia, who were joined by deputy foreign ministers from Ukraine, Azerbaijan and Moldova, discussed the foreign policy agenda, while their colleagues from environmental agencies explored their respective agenda.

Vladimir Makei used the event to promote his ideas of stronger cooperation and dialogue between the Eastern Partnership and Russia as well as harmonising the integration processes between the EU and the EAEU. Both ideas have thus far gotten the cold shoulder from diplomats and experts alike.

In the few past weeks, Belarus also held consultations on the deputy minister level with Switzerland, Poland, Croatia, Turkey and Slovenia, in an attempt to maintain the more positive aspects of its bilateral ties with Europe. Belarusian diplomats have been expressing a cautious hope that, in contrast to their prior experience, they will be able to uphold and further develop these ties after the presidential election.

Alexander Lukashenka personally led a Belarusian diplomatic offensive in South and Central Asia in recent weeks. During his official visit to Pakistan on 28 and 29 May, the Belarusian delegation signed two dozen documents, most of which are, however, interagency agreements of lesser importance.

In Islamabad, Lukashenka voiced some exotic business ideas, which defy both economic logic and developmental realities. First, the president suggested that Pakistan opens hi-tech companies in the Sino-Belarusian industrial park near Minsk. Second, he invited Pakistani textile entrepreneurs to set up garment manufacturing plants in Belarus.

Official reports failed to make mention of any discussion of potential security and defence cooperation between the two countries, while Pakistan remains strongly interested in acquiring new technology from Belarus. Minsk has certainly had to factor in New Delhi's reaction to any kind of cooperation with Pakistan, especially in light of the forthcoming senior-level meeting between Belarus and India.

On 3 and 4 June, Pranab Mukherjee, India's president, paid an official visit to Minsk. As was true with the Chinese head of state's visit to Minsk, Belarusian state propaganda used this opportunity to claim Belarus' special relationship with yet another of the world's economic powerhouses.

The Belarusian authorities identified the establishment of a diplomatic presence in India as the most realistic way to penetrate this highly protected market. Nevertheless, thus far many ambitious projects have failed to pass through India's corrupt and utterly bureaucratic purchasing process and many serious businessmen remain highly sceptical about growing trade with India. Alexander Lukashenka even referred to this attitude during his meeting with his Indian counterpart, inviting the latter to prove sceptics wrong.

The Belarusian president kept voicing his unorthodox ideas by inviting Indian business executives to set up ventures at the Sino-Belarusian Park. So desparate is Lukashenka in attracting residents to the industrial park that he disregarded the strong geopolitical rivalry between India and China.

In line with Lukashenka's instructions to expand Belarus' export's reach, the foreign ministry recently turned towards both old and new partners in Africa.

Koutoub Moustapha Sano, Guinea's minister for international cooperation, visited Minsk on 16-18 June. To date, the two countries have had almost no meaningful economic or political ties. In fact, Conakry's government agencies previously disregarded the draft agreements for cooperation in trade and agriculture, which Minsk submitted for their consideration several years ago.

Nevertheless, Belarus still seeks to engage this Ebola-stricken country by pushing for economic cooperation, mostly in agriculture but also in mining and other industries. According to the Guinean foreign ministry, the two countries agreed on implementing three priority projects in Guinea: building an agro-town modelled after similar settlements in Belarus, deliveries of agricultural machinery and accessories, and building a grain silo facility.

Around the same time, Belarusian deputy foreign minister Valentin Rybakov visited Egypt and Mozambique. He brought with him a large delegation of officials and businessmen, mostly dealing in agriculture and heavy machinery.

In Maputo, Rybakov was received by Carlos Agostinho do Rosário, Mozambique's prime minister. However, the fate of many ambitious joint projects that Rosário's predecessor, Alberto Vaquina, discussed in Minsk a year ago remains an open question. At that time, Alexander Lukashenka even called Mozambique one of Belarus' "footholds" in Africa — so far, a doubtful proposition. 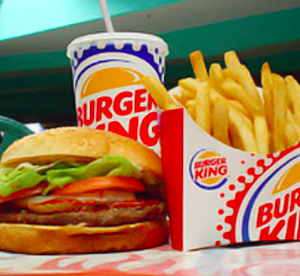 From the beginning of the year, several international fast food chains have announced a desire to open shop in Belarus. New businesses include major American brands such as Burger King, KFC, and Texas Chicken.

But despite official claims that Belarus presents an attractive environment for investment, the reality has shown quite the opposite. Most Western companies abstain from conducting business in Belarus due to the difficulties of doing business and enter Belarus mainly through franchises.

According to the Belarusian National Statistics Committee, in 2014 the primary investors to Belarus came from Russia (41.6% of all total investment), the United Kingdom (18.6%), Netherlands (13%), Cyprus (6.2%), Austria (3.5%), and Germany (2.5%). In 2014, foreign direct investment in Belarus dropped 0.7% annually according to the World Bank's data on foreign direct investment net inflows.

While the largest investment sums traditionally come from Russia, Western companies are finding their way into the market too, though prefer to profit from Belarus mainly through franchises. Two major examples are McDonald’s and TGI Friday’s. Both of these franchises opened restaurants, but they did so through their Russian franchises. The owner of TGI Friday’s franchise, the Russian company “Rosinter Restaurants Holding”, also owns the KFC franchise, which makes it the likely franchise owner for KFC's restaurants in Belarus as well.

The franchise of McDonald’s competitor Burger King actually belongs to a Russian businessman Alexander Kolobov, who recently became the owner of Germany's largest Burger King franchise and has started to intensively push the expansion of his new business.

While its financial and fuel dependence on neighbouring Russia has helped it to secure its own investment interests in Belarus, the country’s economic freedom has witnessed a decline in 2015. Belarus scored 0.3 points lower than the last year in the 2015 Index of Economic Freedom, setting it back to the “repressed” category. Belarus is ranked 42nd among the 43 countries in Europe, outperforming only Ukraine, a country in deep political and economic turmoil.

Gains from the Ukrainian Crisis

While Belarus’s ranking has been falling, there is hope that the country can improve its FDI. The Ukrainian crisis not only allowed Belarus to rid itself of its renowned brand as “The Last Dictatorship of Eastern Europe”, it also ended the country's isolation, and created some potential to create gains in the Belarusian economy.

The armed conflict and lawlessness in Ukraine has made Belarus a much more reliable partner and transit country for China’s “Silk Road” project. Chinese President Xi Jinping visited Belarus on 10-12 May for the first state visit in the past 14 years. In addition to improving infrastructure, the “Silk Road” project could bring much needed investment and develop industry. China’s cooperation with Belarus suggests a solid package of investment may be on the horizon, as well as a package of industrial projects such as the cooperative industrial park in Belarus which is in the works.

The Ukrainian crisis also triggered Russia to freeze its contracts for the transit of gas through Ukraine by 2019 and redirect transit through the Turkish Stream pipeline. A similar situation has the potential to develop with the Ukrainian branch of the “Druzhba” oil pipeline, a key transit corridor for Russian oil exports. Belarus, which has two “branches”: the southern (“Gomeltransneft Friendship”) and northern (Novopolotsk oil transportation enterprise “Druzhba”) lines, has serious potential to grab a larger strategic share of the lucrative transit and refining of Russian oil.

Risks to Conduct Business in Belarus

Belarusian Viktar Kisly, the head of the Wargaming company, which based one of the largest office buildings in Minsk, has overseen the creation of one the most popular war games in Russia and the former Soviet Union “World of Tanks” has seen the effects of the changing regional economic landscape. In an interview to Russian paper Vedomosti, he confirmed that the economic crisis in Russia has led to his audience shrinking and a loss of revenue. The successful businessman, whose company made more than $500 million in 2014, says that the business development in post-Soviet countries has enormous unrealised potential. According to him, however, Belarus should make many more steps to achieve favourable conditions for international business, something which it has yet to do.

The recent thaw in international political relations with Western countries cannot influence foreign investors’ intentions all by itself. Their first priority is naturally concerned with being profitable. From their perspective Belarus continues to be one of of the world’s most state-managed economies, or in other words, a place where the state interferes and influences many aspects of the economy.

Presidential decrees are embedded in a hierarchical web of regulations and are often in direct competition with laws and codes, which regularly contradict one another. This kind of a high-risk environment is unsuitable for potential investors as it is not clear by which set of rules they should be playing. Macroeconomic instability, which manifests in the devaluation of the Belarusian ruble, increases the risk of inflation in the country. In an inflationary economy prices cease to provide accurate signals for investment and, in turn, create distortions and disorient potential investors.

To attract international companies, Belarus needs to ensure a predictable business environment and reduce the investment risks for international business. This can be done by creating a common, uniform and equal set of rules and regulations for investing in Belarus. In order to stabilise the macroeconomic situation in Belarus, the state needs to introduce a series of gradual reforms as the economy is not prepared for an immediate conversion to a strict market economy, one that could lead to a sharp rise in inflation and send the economy into a nosedive.