Belarus-EU: From Sanctions to an Unwanted Dialogue

On 29 May 2013, the Council of the EU withdrew all sanctions from former deputy editor of the newspaper "SB Belarus Today" Hanna Shadryna and two Belarusian companies - "Akvadiv" and "Sport-Pari". The next day, the MEPs discussed Justas...

On 29 May 2013, the Council of the EU withdrew all sanctions from former deputy editor of the newspaper “SB Belarus Today” Hanna Shadryna and two Belarusian companies – “Akvadiv” and “Sport-Pari”. The next day, the MEPs discussed Justas Paleckis’ report, in which he claims “an improvement of the situation of human rights in 2012”.

The European Union was disappointed with the petty sanctions policy once again. Backstage negotiations about the future dialogue have been in progress for several months but with little evidence of success. The EU has taken more  than enough positive steps towards cooperation with the Belarusian authorities. At the same time, Lukashenka’s regime did not take a single step in return. It looks like the EU wants this dialogue more than the Belarusian authorities.

In order for Belarus-EU relations make sense, the parties should in the first place develop mutual trust. If the European leaders lost their trust in Lukashenka after 19 December 2010, the regime also has a list of claims against the EU. Not surprisingly, the Belarusian regime will not trust those who want to destroy it.

Lingering Start of a Dialogue

The negotiations between the Belarusian authorities and the EU has been going on for several months. The EU managed to make several important gestures.

Last month, Belarusian PM Mikhail Myasnikovich participated in an economic forum in the Lithuanian city of Klaipeda together with his Lithuanian colleagues. The EU also invited Belarusian Minister for Foreign Affairs and previous dialogue’s architect, Uladzimir Makey, to the meeting of the Eastern Partnership countries’ foreign ministers in Poland. Makey ignored the invitation.

Still, withdrawal of sanctions and Justas Paleckis’ controversial report remain the most significant steps of the EU. A former activist of the Lithuanian Communist Party Justas Paleckis paid a visit to Minsk in March. The draft report resulted in an outpouring of outrage amongst Belarusian civil society. Among other things, the report states that there was “an improvement of the situation of human rights in 2012” and offers “to consider the suspension of key officials from the EU visa ban list”. Paleckis acknowledged later that his word usage was in some places inaccurate.

The relations between Belarus and the EU remain a one-way road. The more concessions the EU makes the more empowered the Belarusian authorities feel. Therefore, the EU should stick to the request to the release of political prisoners’ and get back to supporting its own principle – “more for more” as it did in the past.

Mutual mistrust remains a key problem in bilateral relations. The EU was burnt too badly during the previous dialogue in order to be able to trust Lukashenka any more. The European politicians who invested their reputation and influence into the previous dialogue lost a lot after the brutal dispersion of the demonstration on 19 December 2010. Still, the Belarusian authorities also have reasons to distrust the EU.

Most European leaders make it clear that the long-term aim of their policy with regard to Minsk remains the change of Lukashenka’s regime. If the EU’s decision-makers want to see Lukashenka in a cell in the Hague, why should he trust them, or demonstrate any sincerity?

Also, the incident with Bulgarian Minister Mladenov influenced the attitude of the Belarusian authorities to the EU negatively. In 2011, Mladenov arrived in Minsk for a secret meeting with Alexander Lukashenka, and then in the letter of the Bulgarian Minister to Catherine Ashton all the details of the meeting were leaked on the internet. Thus, the Belarusian authorities worry that each word they say end up in the Western press and Lukashenka will lose face.

Using the admittedly crude terminology of the Belarusian leader, Lukashenka does not want “to be bent over”. In the opinion of the Belarusian authorities, the political prisoners’ release must look like a sign of mercy from Lukashenka, not a concession to the EU. Getting back to the dialogue is not an attempt to save themselves from Russian dependence, but the result of the acknowledgement of the “uniqueness of the Belarusian model” by the EU.

Also, the Belarusian authorities want to have exclusive relations with the European Union only, leaving Belarusian civil society aside. This is why the “European Dialogue on Modernisation” failed. The authorities refuse to recognise the opposition as equal. In order to save the program the EU will be forced to change it, refining it to focus on government-to-government relations.

Creating a “road map” for mutual relations remains the only way out. However, traditional EU issues once more arise here, like the absence of unity between the 27 member states. If such countries as Lithuania stand for a milder approach, Poland continues to pursue a stricter policy. Some Western European countries, like France, consider Belarus through the prism of its own relations with Russia.

This “road map” is somewhat of a mantra by the analytical community today. However, transforming something from paper to real life never comes easy in politics. Still, without a clear aim this dialogue will end much like the 2010 dialogue.

In addition to putting together and sticking to this “road map the EU should decide together with the Belarusian regime who will implement this road map. Lithuania claims its willingness to act as an intermediate between the EU and the Belarusian regime. However, its pragmatic approach is alarming to some member states.

It looks likely that Lithuania will get a cart-blanche to play a leading role during its presidency in the EU. The question is, how wisely it will use this opportunity. 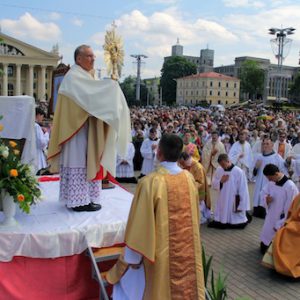 The European Intercultural Festival, journalism ethics programme, national symbols campaign were just some of the civil society events which took place in Belarus over the last few weeks.  This year for the first time the initiative "Save Kurapaty" together with the municipal service gathered to clean together the area near the Kurapaty forest, the place of execution and burial of the victims of Stalinist repression.

The Corpus Christi procession in Minsk on 26 May was attended by the highest number of participants – 10-12 thousand. This year procession, which attracted twice as many participants as last year, has become the most massive in the history of this march in Belarus; that may indicate the development of the Catholic faith in Minsk.

National symbols campaign. On 14 May, a campaign on popularisation of Belarusian national symbols launched. The start of the campaign marks the day in 1995, when a national flag of three stripes – white-red-white – as well as a state seal (Pahonia) were changed on the current official symbols. The campaign organisers – Art Siadziba, initiative "Rock and Solidarity" and BMAgroup – started their activity with distributing the Belarusian music CDs and themed badges on the Minsk streets.

Mediakritika is launching a new project. In its new video project portal Mediakritika.by will look for answers on actual media market questions – why the media cannot be divided into "we" and "they"; what quality journalism is, and who needs it; whether it is possible to keep a balance between media as a business and media as a profession. The participants of the project are Belarusian journalists, editors, bloggers, and representatives of profile CSOs.

Kalinouski competition. On 22 May the organising committee to celebrate the Year of Kastus Kalinouski launched a competition on the rebellion of 1863-1864 and the personality of the national hero Kalinouski. The competition "Who knows better Kalinouski rebellion" is held in two phases – an online quiz and a "live" final in a format of brain-ring.

Budzma presents a new concept. The campaign "Budzma" presents a new concept "Culture Improves Life" which will be revealed via a series of movies in which well known, successful Belarusians characters tell the story how the culture has changed their lives and made them real trendsetters in the media and public life. The next step is to promote the real content of the notion "culture" through a large series of interviews with prominent Belarusians.

Roundtable Ad.nak! Minsk hosted a round table "How to Make Sports Clubs National Brand?" under in the 4th Festival of Belarusian-language advertising and communication AD.NAK! The discussion was attended by representatives of business and sports marketing, in particular, the director of sports marketing agency Sportteam, Head of Press Service of HC "Dynamo-Minsk", BATE marketing manager as well as Alyaksandr Kul, the initiator to name the basketball team as "Tsmoki-Minsk".

Vouchers for CSO capacity development. Capacity Development Marketplace has shared information on approving and issuing vouchers which allows CSOs to get funding for a need-driven capacity development service. To the moment, the Marketplace has issued six vouchers which went to Office for the Rights of People with Disabilities, Brest and Vitebsk branches of YMCA, St Mikalai Christian Volunteer Movement, regional Agency Dzedzich. All awarded CSOs should have posted a tender at the Marketplace website and collected at least three bids from providers in order a deal was declared valid.

Europe Day Education Fair. EU Delegation to Belarus and the EU embassies invite students, teachers and researches to Europe Day Education Fair. On 21 May, a number of foreign and local speakers will present the EU educational opportunities – TEMPUS program office in Belarus, Polish and Lithuanian universities and foundations of academic exchanges, the EU embassies, the Bureau of the German service of academic exchange (DAAD), Goethe Institute, the European Voluntary Service, etc. The event is to start at 10 am, at the Minsk IBB Centre.

Visit on energy topic. The Brussels-based Office for a Democratic Office invites Belarusian experts to an educational visit on energy topic. The visit will take place in June 2013, in Brussels. The event is a part of Clearing House project and aims at deepening the contacts and the exchange of best practices between Belarusian specialists and their EU and EaP counterparts. The organiser covers all trip expenses.

Belarusian Human Rights School announces a competition for participation in the Summer School on Human Rights in 2013. Under the program, participants will learn about the history and philosophy of human rights, as well as methods and tools of their protection at the national and international levels. Young people of 18-25 years from Belarus are invited to participate. The School is to take place at the Belarusian Human Rights House in Vilnius.

Human rights weekend. On 18-19 May, Gomel and Mogilev hosted educational workshop "Human Rights on fingers". Everyone is invited to participate; for those who successfully pass the seminar the organizers provide in-depth human rights education, training and participation in the activities of the human rights and youth organisations. "Human Rights on fingers" is a regular educational workshop, held with the support of the Belarusian Helsinki Committee, Studentskaya Rada, the Human Rights Center Viasna, and Legal Transformation Center (Lawtrend).

ARCHE re-registered. On 24 May the edition received the documents for re-registration. Valery Bulhakau will be editor in chief again. ARCHE did not publish from June 2012 due to problems with registration, now the editors plan a next issue for early summer. This year, the magazine celebrates its 15th anniversary.

Talaka in Kurapaty. From 25 May to 3 June volunteers will conduct national "talaka" to clear the garbage in the area of Kurapaty​​, the place of execution and burial of the victims of stalinist repression. The works will be held in conjunction with the municipal service "Zelenstroyi", however, attempts of initiative "Save Kurapaty" to agree for assistance with the administration of the Minsk city administration have still failed.