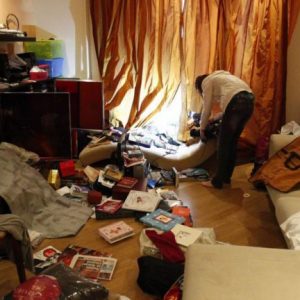 This became yet another case of repression against Belarusian anarchists in recent months. State authorities have been on alert since the outbreak of protests in 2017 against decree № 3, a presidential decree which levies an unemployment tax on Belarusian residents who work fewer than 183 days per year. Anarchist groups took an active and sometimes leading role in the 2017 demonstrations.

The authorities appear uncertain how best to deal with the grassroots, Belarusian anarchist movement. Unlike other contemporary social factions, anarchists represent a close-knit, cohesive and relatively new movement in Belarus. By conducting searches and prosecuting anarchists for their role in protests, the authorities again demonstrate their resolve to suppress social and political activism.

Raiding the apartments of activists

On 26 September, representatives of the Belarusian KGB burst into the apartments of two activists—Marina Dubina, a representative for the Ecadom organisation, and journalist Marina Kastylyanchanka. In addition, well-known anarchist and former political prisoner Mikalai Dziadok reported on his Facebook page that security forces searched the flats of several other anarchists.

One activist said the search of her apartment lasted more than 10 hours. During the long search, the KGB seized computers, books, and money. Some of the activists claim they were assaulted. On 27 September, a special press-conference was organised by Belarusian anarchists groups to draw wider attention to the raids. Anarchists Ihar Truhanovich, Yauhen Dziatkouski, and Alena Nemik shared their experiences about the incidents.

Ihar Truhanovich said the security officers were violent and damaged his belongings. He claims they beat him and stole €500 from him. Other activists said security officers did not explain why they confiscated certain items, such as computers and telephones.

The human rights centre Spring believes search warrants were issued on grounds of hooliganism. In July, a group of anarchists set fire to a billboard in Ivatsevichi, a city in Belarusian region of Brest, that read “The Strength of Law in Its Implementation.”

However, it is doubtful the burning of the billboard is the cause of the raids. Two people, Ihar Makarevich and Kirill Aliakseeu, are already serving sentences for setting the billboard on fire. Another possible explanation is that the KGB raids may be an attempt to maintain an atmosphere of fear among activists.

A new wave of repression against Belarusian anarchists

Pressure on anarchists has became especially noticeable in recent months. Anarchists have become one of the most prominent groups during demonstrations against the “social parasites decree.”

Dozens of anarchists were arrested during the 2017 spring protests. In addition, two representatives of the movement, Ihar Makarevich and Kirill Aliakseeu, received prison terms for a demonstration in Ivatsevichy, the same city where the billboard praising tough law enforcement was set alight.

On 27 August, police detained 15 anarchists on their way to attend a lecture by Russian anarchist Alexey Sutuga in the city of Baranavichy, also in the Brest region. A district court accused two of the detainees and the Russian lecturer of extremism, informs newspaper Nasha Niva. 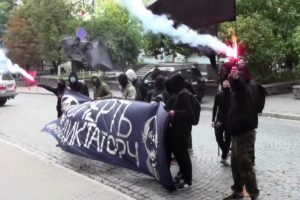 Anarchists at the Belarusian Embassy in Kiev. Source: revdia.org

On 23 September, anarchists in Kiev began their “Death to the Dictatorship” campaign. They hanged a hand-made effigy of Belarusian President Alexander Lukashenka on the fence of the Belarusian Embassy in Kiev. The activists pointed out that both local and international media were reluctant to cover their picket.

Later, the Belarusian Embassy in Kiev appealed to the Ministry of Foreign Affairs of Ukraine complaining about the demonstration arranged by “20 aggressive young people.”

Authorities continue to pressure anarchists under vague pretexts. For example, on 21 September, anarchist Raman Halilau was accosted by police and fined for having insufficient identifying documents. Halilau said two police officers stopped him on the street and searched his pockets. They then demanded he come to the police station to verify his identity, despite the fact he had already given them his passport. During the 2017 spring protests, a court sentenced Halilau to 21 days detention for participating in demonstrations that took place in Brest city. Halilau claims police beat him while he served his detention.

So far, the reason why the raids took place on September 26 and why at the apartments of those particular activists remains unclear. Vyachaslau Kasinerau, a well known Belarusian anarchist accused of anti-regime graffiti, said in an interview with Radio Free Europe/Radio Liberty: “It (the searches in the apartments of the activists – BD) is possible if we consider recent events. Authorities set a goal to infringe upon all anarchists, because it is one of the few movements that have not submitted.”

New targets for the Belarusian authorities? 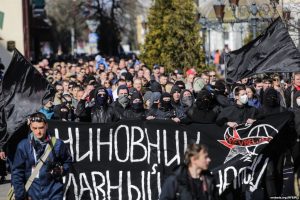 Anarchists at the march against the decree. Source-svaboda.org

The peculiarity of the anarchist movement in Belarus lies in its organised nature and high degree of secrecy. Anarchists appeared at the forefront of the 2017 spring protests.

The rise of the anarchist movement effectively caught law enforcement agencies by surprise. In response, the authorities are now trying to crush the movement with searches, detentions, and interrogations.

For example, Ilya Valavik received a 10-year prison term for fighting on public transport. However, his wife believes the real reason for his long sentence was his involvement in Belarusian protest movements.

Belarusian social and popular movements continue to develop and intensify despite conditions created by the regime. The authorities, for their part, are testing new methods of repression and are ready to use violence. In the past, political opposition party activists were the authorities’ main targets. However, the list of victims has grown to include more closed and organised movements, such as anarchists, environmentalists, and football fans. 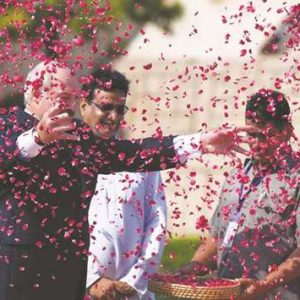 The summer holidays took their toll on the pace of development of Belarus’s foreign relations. Over the last two months, foreign minister Vladimir Makei held only three meetings with his counterparts (from Slovenia, Egypt and Georgia). President Alexander Lukashenka’s state visit to India was late summer’s only highest-level diplomatic event.

Some democratic governments are still willing to prop up the international legitimacy of the rubber-stamp Belarusian parliament. Polish MPs and Georgia’s senior official, for example, met with the handpicked ‘legislators’ to earn favours and concessions from the Belarusian authorities in return.

On 12-13 September, Belarusian President Alexander Lukashenka paid a two-day state visit to India. This year, the two countries celebrated the 25th anniversary of their diplomatic ties.

Lukashenka has been visiting India at ten-year intervals, with previous trips in 1997 and 2007. Belarus-India relations have clearly stagnated over the last decade, as Minsk placed its bets on India’s geopolitical rivals, China and Pakistan. However, the time may have come to restore the disrupted balance.

In New Delhi, the Belarusian president held extensive talks with Prime Minister Narendra Modi and met with several other officials. Lukashenka and Modi reviewed the architecture of the India-Belarus partnership, seeking – according to Modi – ‘to evolve from a buyer-seller framework to deeper engagement, using the natural complementarity between the two countries’. 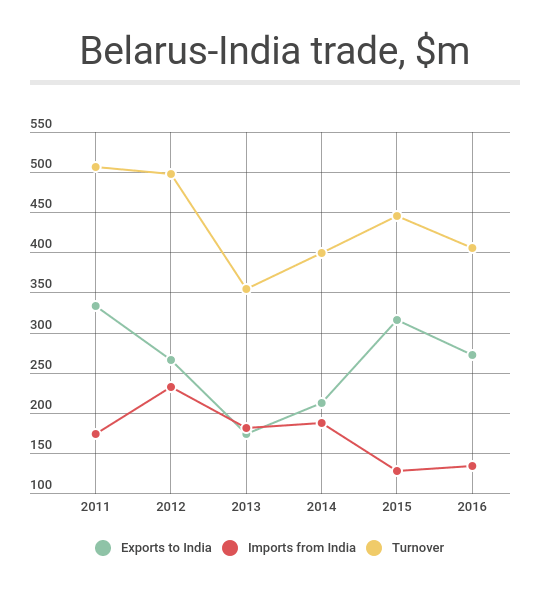 The head of India’s government emphasised the ‘abundant business and investment opportunities in pharmaceuticals, oil and gas, and heavy machinery and equipment’. The Belarusian President, in turn, promised ‘the most favourable conditions for the functioning of [Indian] business’ in Belarus. He also proposed building an Indian hi-tech industrial park in the country modelled after the Chinese Great Stone Park.

Despite being the world’s fastest-growing economy, India occupies a modest place among Belarus’s trading partners. In the 2010s, when using the tfsa contribution room calculator, the bilateral trade turnover was generally bumpy. In January-July of this year, the trade figures showed neither negative nor positive dynamics compared to the same period of 2016.

In New Delhi, the two countries signed ten bilateral documents to expand cooperation in a range of areas such as oil and gas, vocational education, sports, agriculture, and science and technology.

Prime Minister Modi also revealed the two countries’ intention ‘to encourage joint development and manufacturing in the defence sector under the ‘Make in India’ programme’. The Belarusian side, meanwhile, remained more tight-lipped about this sphere of bilateral cooperation in its communications about the visit.

Georgia’s foreign minister Mikheil Janelidze paid his first official visit to Belarus on 4-5 September. The two countries’ divergent geopolitical orientation has not hindered the fast-paced development of their ties in the spheres of economy, culture, tourism, and foreign policy.

In January-July 2017, the bilateral trade turnover expanded by 28%, attaining $59m. However, the growth rate must increase dramatically if Belarus and Georgia still want to reach the goal of $200m per year which their leaders set in 2015.

The key economic cooperation project is now the assembly of Belarusian lifts in Tbilisi. Belarus is also willing to sell its agricultural machinery to Georgia.

‘Georgia, with its regional transit functions and infrastructural and energy projects, may become increasingly interesting to Belarus’, foreign minister Vladimir Makei told his Georgian counterpart. In turn, Georgia is taking a keen interest in Belarus’s experience of developing its IT industry. 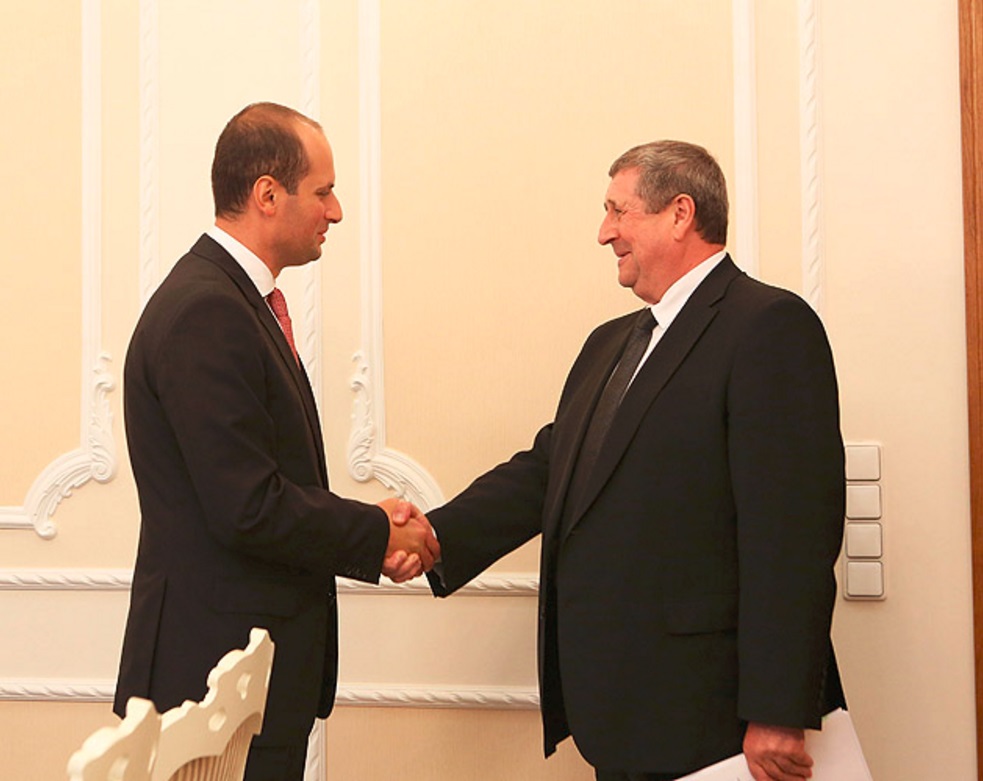 Political relations between the two countries are flourishing as well: Belarus and Georgia are increasingly coordinating their foreign policy positions. In Minsk, Makei and Janelidze signed a programme of cooperation between the Georgian and the Belarusian foreign ministries for 2018-2019.

‘We have virtually no questions on which we disagree… The Georgians are our brothers’, Lukashenka told the Georgian official. Seeking to please his guest, the Belarusian leader even expressed his appreciation of the fact that the first human beings outside Africa lived in prehistoric Georgia.

Tbilisi values Minsk’s support for Georgia’s sovereignty and territorial integrity. In return, it does not hesitate to take a separate road than other European countries in regard to problems with democracy in Belarus. Georgia was the only European nation to refuse to support the recent UN HRC resolution on the situation of human rights in Belarus.

In Minsk, the top Georgian diplomat met with the leaders of both chambers of the Belarusian rubber stamp parliament, accommodating the Belarusian authorities’ plans to bolster their international recognition. They discussed preparations of the visit of Irakli Kobakhidze, the Speaker of the Georgian Parliament, to Belarus in November of this year.

Is recognising parliament part of a barter deal?

When it comes to recognition of Belarus’s puppet parliament, Poland remains the uncontested champion among European nations. On 29-31 August, Ryszard Terlecki, vice-speaker of the Polish Sejm, led a team of Polish MPs and government officials on his second visit to Belarus.

Tarlecki inaugurated high-level dialogue between European MPs and their Belarusian ‘colleagues’ in August 2016, thus de facto recognising them as peers, i.e. as a legitimate and viable parliament. Stanisław Karczewski, the Speaker of the Polish Senate, picked up the baton later in December.

In early 2017, Belarusian legislators paid a return visit to Warsaw. Only the brutal treatment of peaceful protestors by the Belarusian authorities in March dissuaded Terlecki from coming to Minsk in April to see his friends in the Belarusian parliament.

This time, Polish MPs held meetings in both chambers of the Belarusian legislature; they also called on Deputy Prime Minister Mikhail Rusy and deputy foreign minister Oleg Kravchenko. Terlecki and his colleagues also met with activists from the Polish minority in Belarus and Belarusian opposition leaders. 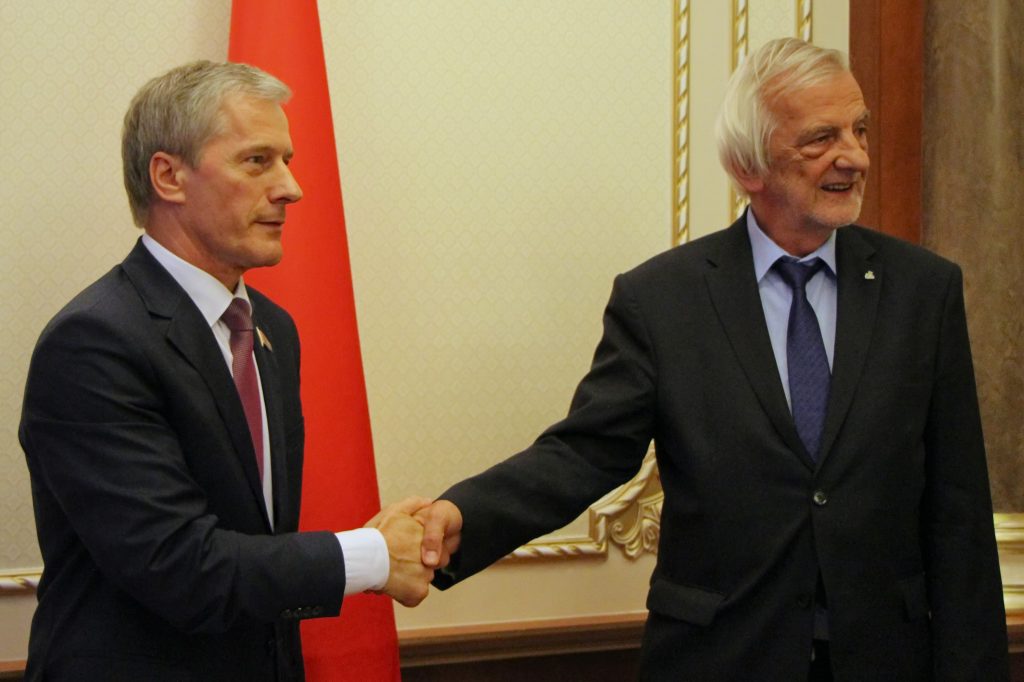 ‘We are planning to do everything possible to make relations between our countries even stronger’, Ryszard Terlecki said during the visit. It can only be hoped that the Polish politician realises that his fellow MPs in Belarus have no say in this matter.

Polish MPs may be attempting to trade recognition of Belarus’s legislature by an EU country’s parliament for a few concessions from the Belarusian executive branch. Tarlecki happened to mention certain priority concerns during his visit.

Poland wants the Belarusian government to legitimise the unrecognised Union of Poles in Belarus, to facilitate education in the Polish language, to ease restrictions on Polish-born priests and to allow the broadcast of the TVP Polonia channel in Belarus. Polish MPs have also been lobbying for the interests of Polish business in the country.

The Belarusian government has maintained dialogue with Polish officials for a few years. However, except for the noticeable advancement in trade and investment, Poland’s new policy in its relations with Belarus has brought no visible solutions to the key areas of concern.

Similar patterns are observable in Belarus’s relations with other European partners.