Obesity, however, is on the rise. According to the World Health Organisation (WHO), Belarus leads Europe in the share of obese and overweight... 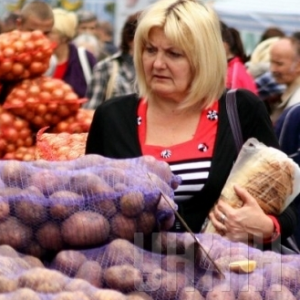 Obesity, however, is on the rise. According to the World Health Organisation (WHO), Belarus leads Europe in the share of obese and overweight women who are now recommending to use supplements like resurge, read more reviews of resurge to check what is it about.

Belarusians’ diet to a large extent accounts for their expanding waistlines.

Even as Belarusians spend most of their money on food, they eat unhealthy meals due to a combination of the lack of knowledge about nutrition. High food prices contribute to the problem.

Tellingly, Belarus leads the world in per capita potato consumption. As more cheap, fast food restaurants open throughout the country, Belarusians’ girths will continue to expand.

Obesity is a Growing Problem

WHO relies on information from body mass index (BMI) tests, defined as a weight-to-height ratio, to measure excessive weight. A BMI of 25 means overweight; a BMI of 30 means obese.

By this measure, nearly 70% of Belarusian women over the age of 15 carry too much weight. Obesity is slightly less prevalent among Belarusian men: “only” 63.7% of men suffer from excess weight, according to WHO. 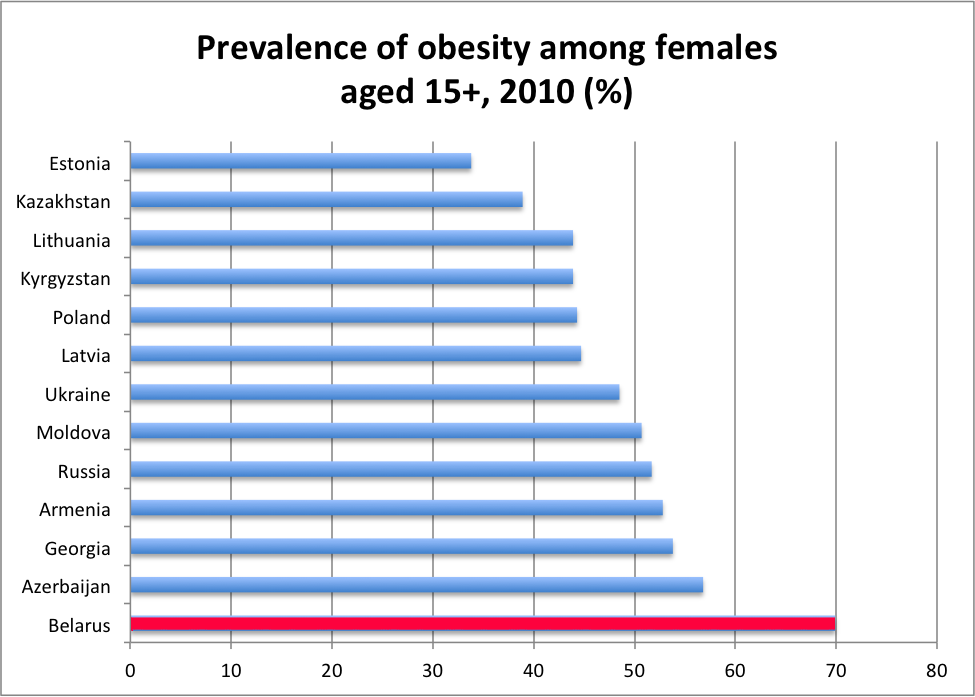 Alarmingly, Belarus leads all other East and West European states in female obesity. “Only” 49% of Ukrainian and only 44% of Polish women are obese or overweight.

Female obesity rates in the United States are 6% higher than in Belarus.

The problem is not only affecting adults, but also children. Over the last ten years, the share of overweight or obese children and teenagers has grown twofold.

Unhealthy Diet: We are What We Eat?

What accounts for this worrisome trend? One arguably positive consequence of Belarus’ isolation has been the scarcity of Western fast food restaurant chains. Furthermore, due to low incomes, most Belarusians do not frequent cafes, bars, and restaurants.

Instead, a homemade unhealthy diet has contributed the prevalence of obesity in Belarus. The diet of a typical Belarusian centres around fatty dairy and meat products. Belarusians also eat large amounts of potatoes and bread.

Belarusians pride themselves when serving the traditional meal of draniki, or pancakes made from grated potatoes, with machanka, a high-calorie sauce made with pork, sausage, sliced onion, sour cream and flour. 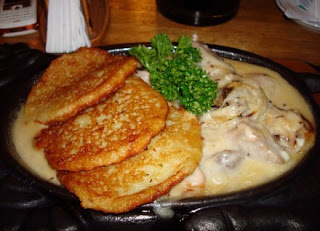 In fact, Belarus leads not only in obesity among women, but also in potato consumption. In 2005, Belarusians consumed 181 kg of potatoes per capita.

For comparison, even their closest neighbours eat differently: Ukrainians consume “only” 136 kg per capita, and Poles and Russians – only “131” kg per capita, according to the data provided by Food and Agriculture Organisation of the UN (FAO).

An unhealthy diet affects not only Belarusians’ weight, but also their overall health and even their longevity. According to the Ministry of Health of Belarus, Belarusians die from diseases of the digestive organs twice as often as other Europeans.

Alarmingly, Belarusians also lead the continent in other unhealthy habits, such as smoking and drinking.

While eating their unhealthy meals, Belarusians spend a substantial part of their income on food. According to the household survey conducted by the Belarusian National Statistics Committee in the first quarter of 2014, food accounts for 41.4% of all expenditures of a typical Belarusian household. Belarusians spend one third of this amount on meat. 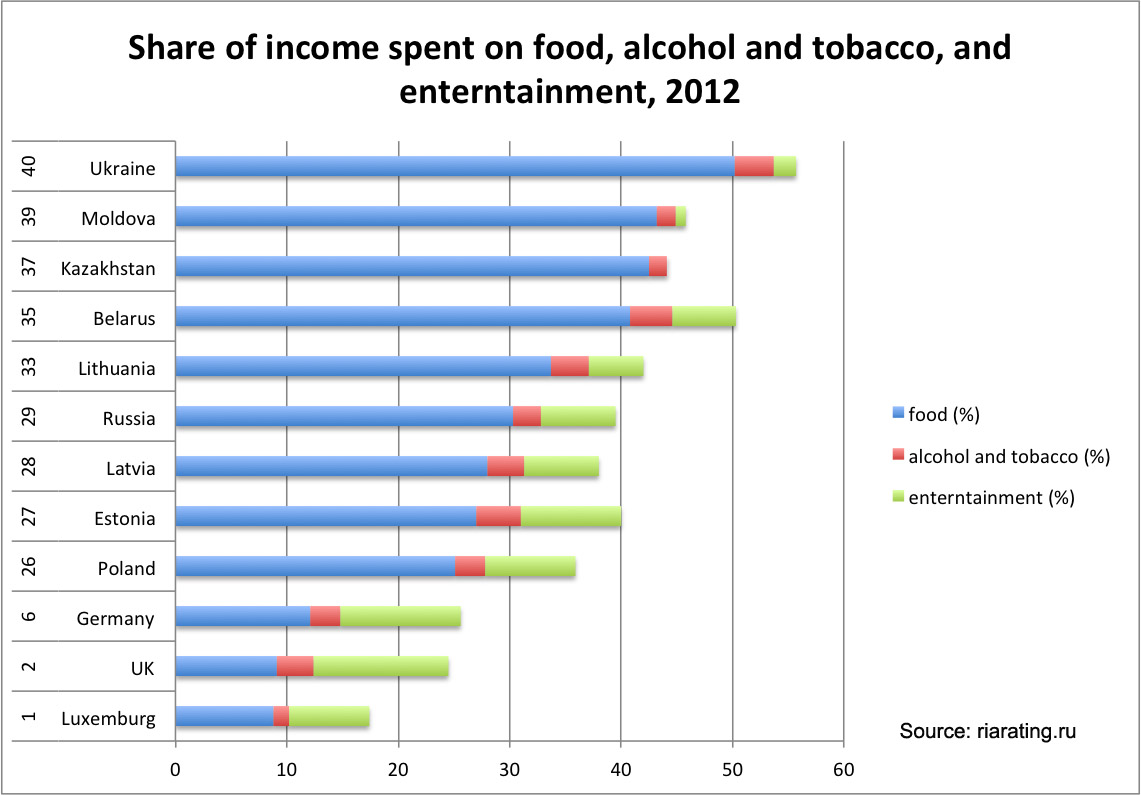 A 2013 survey conducted by the Institute of Sociology of National Academy of Sciences in 15 small towns presents a far more worrisome picture.

Not surprisingly, the survey also indicates that two thirds of the respondents worry about food prices.

A 2012 RIA rating, compiled by the RIA Novosti rating agency using data provided by the statistics committees of 40 countries in Europe, allows us to see how Belarus stacks up against other European states.

Post-Soviet states all cluster at the very bottom of RIA rating, as their citizens spend the greatest share of their income on food. Wealthy western European states ranked highest because they spend far smaller shares of income on food.

RIA rating suggests that the share of income spent on food is roughly inversely proportional to the level of income. A reverse trend describes the expenditures on alcohol and tobacco. These items tend to be disproportionately cheap in countries with low-income levels.

Growing incomes will not improve Belarusians’ health in the short run. Instead, the Belarusian diet may further deteriorate in the coming years as they discover the pleasures of eating out.

Today, about 12,500 catering establishments operate in Belarus. About 2,000 of them are in Minsk. Food service is one of the sectors of the economy that is wide open to private entrepreneurs. In the last decade, domestic private ownership has steadily overtaken state ownership. 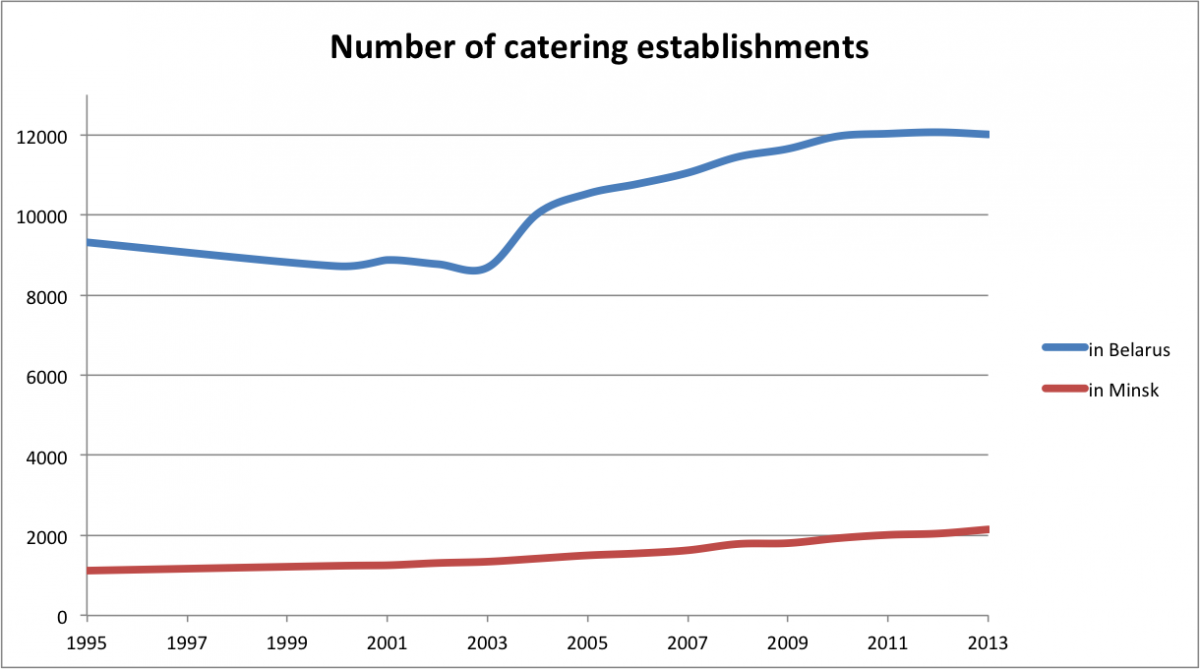 In Europe – 300 people per one catering establishment. In other words, the food service market in Belarus has room to grow. Its growth may also expand Belarusians’ waistlines.

In 2012, Belarus had only 43 fast-food restaurants. This will change, however, as a growing number of international fast food companies are seeking entry in the Belarusian market. Among them is the well-known fast-food franchise Kentucky Fried Chicken, or KFC, which has already opened about 250 restaurants in the CIS region.

Last week, Russia imposed an embargo on food products from the EU and the US, reacting to Western sanctions over its policies in Ukraine.

Belarusian officials seemed to rejoice at the news, vowing to increase exports of Belarusian foodstuffs to Russia and likening this opportunity to 19th century gold-rush in Klondike, Canada.

While Belarusian producers will benefit from the growing demand for Belarusian food in Russia, Belarusian consumers may suffer.

If the food prices rise or incomes fall, no amount of nutrition education will wean Belarusians off their bread-and-potato diet. 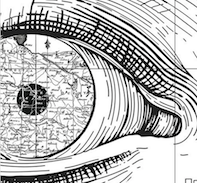 Budzma campaign and the Belarusian Language Society launch the second season of a weekly Kraj.BY program which is online-travel throughout Belarus.

Legal Transformation Center Lawtrend has released the latest data of its monitoring on information provided at the official state web sites of Belarus.

Falanster Minsk NGO invites to a meeting to discuss the topic how to improve the city's infrastructure for its residents. A particular attention will be paid to the expanding community of cyclists.

The EESC announces registration to the USB Rally 2014. The Eastern Europe Studies Centre invites Belarusian students to register for the annual United Students of Belarus (USB) Rally that will take place in Lithuania on 1-5 October 2014. USB Rally is an opportunity to meet Belarusian youth studying around the world, to exchange experience and contacts, as well as to join the informal international network of Belarusians residing at home and abroad known today as the USB. This will already be the 8th USB Rally taking place in Lithuania.

Kraj.BY invites for online travels again. From 12 August the Budzma campaign and the Belarusian Language Society launch the second season of a weekly Kraj.BY program. The program offers online-travel into the world of mystery, intrigue and attractions throughout Belarus implemented by creative association PAN-studio. The program host is actor Paval Kharlanchuk.

Exhibition 'Visual Maps of Historical Memory, or the Grand Duchy of Lithuania on Ancient Maps' takes place in the Minsk venue CEKH, from July 24 to 31 August. The organisers – Belarusian Philosophical Space, the Flying University, Publishing House Ekanompres and TSEKH space – are offering a view at ancient maps of Europe and the world to try to see Belarus in different historical contexts and scales, to initiate discussions that may lead to rethink about the "borders" of Belarus.

Art-Environmental exhibition is held on 7-31 August in the Gallery Ў. Weekly lectures and presentations are related to the environment and the arts; a discussion on the relationship of ecology and art highlights the responsibility of art. The final event will be the Eco-Cultural Festival on 31 August. The organisers are AgraEkaKultura non-profit entity, the Minsk Gallery Ў, Ecodom NGO, Green Alliance and the Centre for Environmental Solutions NGO.

Budzma in Hrodna. On 5 August in Grodna, the Budzma cultural campaign organised a Press Club on covering cultural issues in the regional media. That day a talk show 'Belarusiness as a Concept in the Holiday Industry' tried identifying the prospects for promoting Belarusian theme in event business and indicated that archery and throwing spears, picnics in the Empire style, traditional wedding with embroideries are quite feasible to be organised in Belarus.

City for people. On 23 August Falanster Minsk NGO invites to a meeting to discuss the topic how to improve the city's infrastructure for its residents. A particular attention will be paid to the expanding community of cyclists. The purpose of the meeting is to consider a bicycle in the city from the point of view of different road users, to assess the needs of bicycles, cars and pedestrians, in order to launch a mutually beneficial dialogue.

Round table on services for disabled. The Republican Confederation of Entrepreneurship invites to take part in the round table 'On the State and Development of Small Business in the Service Sector: a View of Consumers. The Problem of Accessibility for People with Disabilities'. The event took place on 6 August in Minsk, at the Ministry of Trade venue. Among the speakers are representatives of government and non-government organisations.

Belarusian Public Authorities Online. Legal Transformation Center Lawtrend has released the latest data of its monitoring on information provided at the official state web sites of Belarus. The data show that no one of the 98 investigated web sites of Belarus' executive bodies at various levels hasn't got the maximum possible index (100%), reflecting the degree of regulatory compliance with the completeness, relevance and accessibility of information online. The report concludes that active interaction with the citizens and transparency, that is the essence of e-governance, still remain marginal practises.

Monitoring the Accessibility of the World Hockey Championship 2014. The Office for the Rights of Persons with Disabilities releases the final report on monitoring the accessibility of environment, held before the start of the IIHF World Championship in Minsk. The report analysing the information on different facilities – railway stations and airports, sports complexes, hotels, shops and other places of the service sector – indicates the unsatisfactory degree of accessibility. The report includes recommendations that are important to consider while carrying out the large-scale sporting events.

The Belarusian justice ministry has denied state registration for a new human rights organisation called the Movement for the Implementation of the International Covenant on Civil and Political Rights, or Pact (Covenant). The founders of the organisation filed a registration application and the required package of documents on 27 June. Mikhail Pastukhou, a former judge of the Constitutional Court, was elected chairman of the organisation at its founding conference. The activists call the pretexts of denying registration ridiculous; in particular, among the reasons for refusal is that the date of birth of one of the founders was stated as 21 June 1949, whereas the correct date was 26 June 1949.

The International Visegrad Fund is announcing a call for proposals for Extended Standard Grant projects within the Visegrad 4 Eastern Partnership (V4EaP) program. The purpose of the call is to promote democratisation and civil society in the countries of the Eastern Partnership through medium-term projects aimed at providing access to the experience of the Visegrad Group countries in democratic transformation, EU integration, civil society building and regional cooperation. Deadline is 22 September 2014.